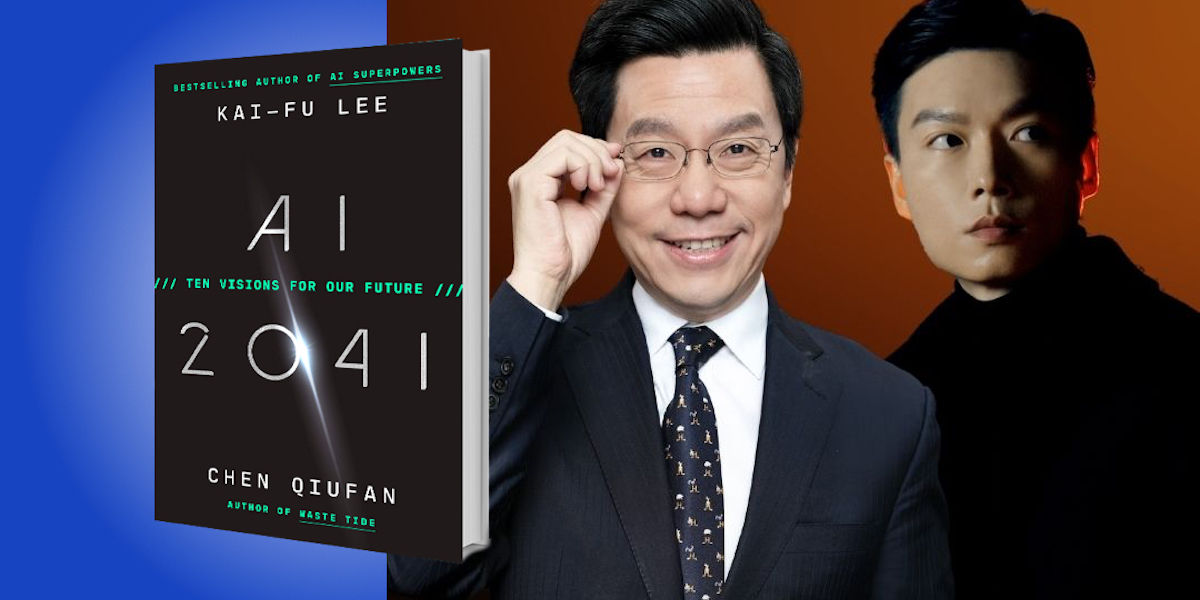 Kai-Fu Lee is a Taiwanese computer scientist based in Beijing. After earning his Ph.D. in computer science from Carnegie Mellon, he worked at Apple and Microsoft before becoming president of Google China, a position he held from 2005 to 2009. Chen Qiufan is a renowned Chinese science fiction writer and the author of the novel The Waste Tide.

Below, Lee shares 5 key insights from their new book, AI 2041: Ten Visions for Our Future. Listen to the audio version—read by Lee himself—in the Next Big Idea App.

As AI and other technologies disrupt the world, we all must familiarize ourselves with the opportunities they pose and the challenges they may create. But how? One of the best ways to explain AI—to make it accessible and fun—is through storytelling. But traditional science fiction has drawbacks—too often, it relies on impossible technologies, such as time travel and self-conscious robots. Two years ago, I had an idea: What if there was a new literary genre where the stories rely on technologies that are likely to be feasible in 20 years? With this idea, I sought out an award-winning science fiction writer, Chen Qiufan. By combining my AI expertise and Qiufan’s storytelling skills, we pioneered a new form of “scientific fiction.”

2. AI will disrupt every industry.

AI 2041 tells stories about how AI and other technologies will change the way we learn, work, communicate, and play. AI will learn from our health data to accurately diagnose our illnesses, prescribe precision medicine, and invent treatment for previously incurable diseases. Thanks to AI, our cars will become the safest drivers on the road. AI will also open up new worlds of immersive entertainment, delivering a virtual experience indistinguishable from the real world, blurring the boundaries between real life, remote communications, games, and movies.

“The story of AI in the next 20 years will be the story of humankind.”

AI will take over virtually all routine blue-collar work, thereby reducing the cost of production. Combined with the plummeting cost of energy and many materials, we will enter an age of abundance where most goods will become very affordable, if not free. This will not only reduce or eliminate poverty, but it will also challenge existing institutions in our economy.

In 20 years, AI will not just be a set of technologies, but will disrupt almost all industries, institutions, and even the human race, making it necessary to re-invent ourselves. The story of AI in the next 20 years will be the story of humankind.

3. AI will grow in capabilities, but will not become super-intelligent in 20 years.

Let’s first understand how AI works and what makes it powerful. Unlike humans, AI learns one problem at a time. For each problem, it applies complex mathematics to a huge amount of data. For example, YouTube learns from all users’ behaviors to know what videos to show us that we are most likely to click on. Humans could never do this with the same accuracy and targeting. Over the next 20 years, more data, faster computers, and better algorithms will improve AI’s capabilities. We’ve seen this in the past five years, as AI beat humans in complex games, certain types of cancer diagnoses, and even solving difficult scientific problems. The set of tasks that AI can do better than people will continue to grow rapidly in the next 20 years.

However, while AI does well on quantitative and data-driven tasks, it lacks many elements of human intelligence, such as abstraction, conceptualization, creativity, and common sense. And AI has no self-awareness, feelings, empathy, or compassion. We do not know how to teach AI these capabilities, since we do not even know how our brain learns and applies them. The theories of super-intelligence and singularity state that exponentially faster computers will lead to exponentially smarter AI. But these theories forget that in addition to speed, new AI breakthroughs are also needed to teach AI creativity, common sense, and love. This is why, while AI will continue to grow in its prowess, it will not make us obsolete.

“While AI will continue to grow in its prowess, it will not make us obsolete.”

4. AI job displacement will be serious, but it can be solved.

Being quantitative in nature, AI will take over routine work, such as telemarketing, filing expense reports, visual inspections, deliveries, and more. AI will become better and better at these tasks, displacing more and more jobs in the next 20 years. Yet, we are optimistic that new jobs will emerge to solve this problem.

First, let’s look at the core problems. There are two categories of things that AI cannot do: jobs related to creativity, strategic thinking, and analysis; and jobs that require a high level of human touch (compassion, empathy, connecting with people). We need to retrain people for these jobs, and plan on elevating their pay and status.

Second, let’s look at what jobs AI will create. These will include advanced jobs like programming AI and robots, professional jobs like robot and autonomous vehicle repair, and also entry-level jobs like data processing and labeling. AI will create many other types of jobs that we cannot yet predict, just as the internet has over the past three decades.

Third, there will be an emergence of jobs that have little or no economic value but have social value—for example, volunteers at elderly homes, hotlines, and foster homes. These volunteer jobs can help pass time, bring a feeling of accomplishment for the volunteers, and add social value to the world.

“AI will create many other types of jobs that we cannot yet predict, just as the internet has over the past three decades.”

Like all technologies, AI will destroy and create jobs, but AI will do so faster because AI is, by definition, replacing human capabilities. In its wake, we will need to fundamentally rethink our approach to work. As a reward, we will be liberated from routine work forever.

5. Many of the problems caused by AI will be solved by AI researchers.

Public perception of AI has turned negative in the last few years. We all read about AI bias, privacy violations, deep fakes, AI hacking, and autonomous weapons. Many people advocate using regulations to prevent misuse. While regulations are undoubtedly needed, every new technology introduces externalities and vulnerabilities. The most effective way to address these issues is to invent new technologies. For example, when electricity was invented, people found that electrocution kills. But the best solution wasn’t to outlaw electricity; it was to invent circuit breakers.

In the AI domain, people are concerned that their data may be seen or shared too widely. But rather than preventing companies from using user data, we should invest more in privacy computing. For example, within this new discipline, a new technology called “federated learning” allows us to have our cake and eat it too. A user’s data is kept only on computers that the user approves—on your mobile phone, for example, or with your hospital. Through a combination of new technology and strategic regulation, we should be able to address most of the issues that AI causes.

To listen to the audio version read by Kai-Fu Lee, download the Next Big Idea App today: