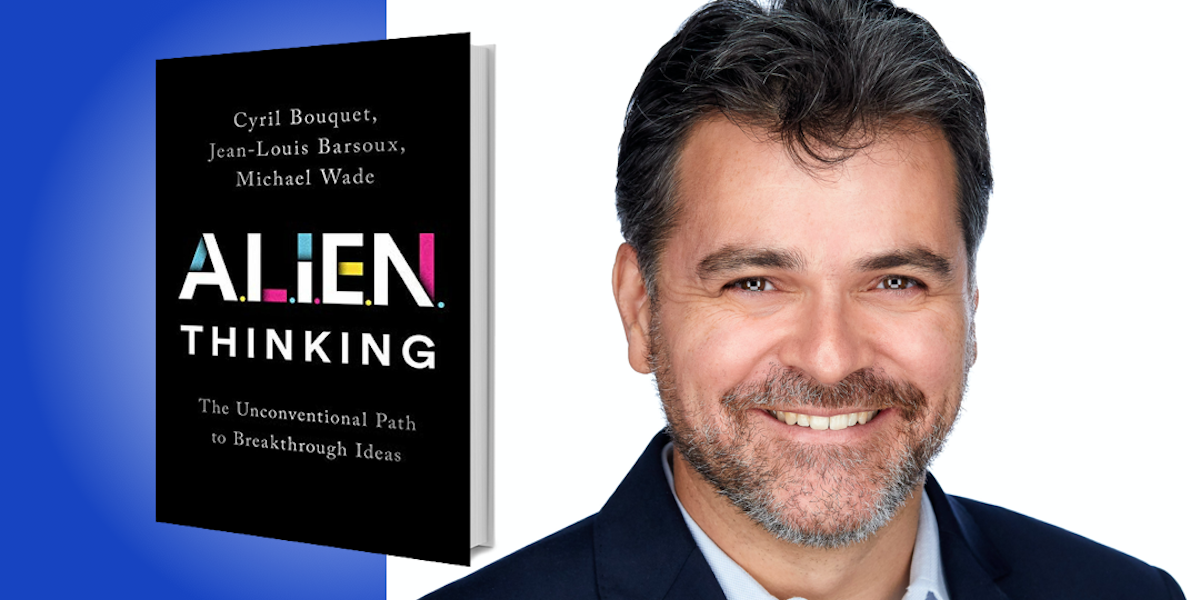 Cyril Bouquet, Jean-Louis Barsoux, and Michael Wade serve on the faculty of the Institute for Management Development, a business school based in Lausanne, Switzerland that focuses on executive education.

Below, Cyril shares 5 key insights from their new book, ALIEN Thinking: The Unconventional Path to Breakthrough Ideas. Listen to the audio version—read by Cyril himself—in the Next Big Idea App.

The way we see things is distorted by our habits, assumptions, experiences, and professional training. A lawyer, a physician, and an engineer may have very different takes on the same problem. Everyone has these blinkers, which the French call déformation professionelle, and the result is missed opportunities.

To break out of this trap, imagine yourself as an alien from another planet. When an alien comes down to Earth, it sees the world with fresh eyes. It’s not constrained by assumptions and biases like we are. As an outsider, it also needs to learn how to navigate through a new and potentially hostile environment. Thinking this way can help you notice subtle signals that other people miss.

“Alien thinkers talk to the janitors, because they understand the value of connecting with a diverse set of perspectives and insights.”

In our book, we tell a story about how researchers from The Kellogg Company went about trying to develop healthier snacks for schoolchildren. In order to understand children’s eating habits at school, they talked to parents, teachers, nutritionists, and the kids themselves. But they felt the information they were getting was limited and inaccurate. Then the researchers started talking to the janitors at the schools. It turned out that the janitors knew exactly what the kids were eating, what was being traded on the school lunch black market, and what was being thrown away. As part of their job, the janitors walked through the school’s corridors and were present during recess. They noticed things that nobody else did, but no one had asked them for their opinions before.

Alien thinkers talk to the janitors, because they understand the value of connecting with a diverse set of perspectives and insights.

2. The five-step path to breakthrough ideas.

To master creativity, try thinking like an A.L.I.E.N., an acronym that describes a five-part model of innovative thinking.

A is for Attention, consciously switching your focus to see the world from different angles. This will help you notice different things, as Kellogg’s did when they engaged janitors to gather unique insights on the characteristics of healthy food diets.

L is for Levitation, which is about rising above or retreating from the world. This involves taking time-outs to reflect and recharge your batteries. Ferran Adrià, the famous head chef of El Bulli restaurant, used to close his business six months every year to achieve the peace and quiet he needed to refresh his creative approach. The neuroscience is clear: Your brain needs to be given the time and mental space required to reflect and create.

“Previous designers had always assumed that amputees wanted a solution that looked like a leg. What Van Phillips wanted was something that functioned like a leg.”

I is for Imagination, which is about playing with ideas, like kids do, and connecting the dots in new and creative ways. The story of Van Phillips provides a good illustration of this. He lost his lower leg in a water-skiing accident, and he was so dissatisfied with the performance of the prosthetic limb he received that he decided to design his own. Previous designers had always assumed that amputees wanted a solution that looked like a leg. What Van Phillips wanted was something that functioned like a leg. So he approached the problem from a very different perspective, drawing inspiration from everything from diving boards, to the curved sword hanging in his father’s office, to the legs of wild cheetahs. By combining these insights, he was able to design the famous blade-like prosthetic limb that powered double-amputee Oscar Pistorius to succeed as a professional sprinter.

E is for Experimentation. Experimentation is all about testing your ideas quickly and intelligently with the goal of improving your ideas, as opposed to simply trying to prove that your initial thinking is great. As the proverb goes, “If you torture the data long enough, it will confess to anything,” meaning you can force just about any data to conform to your existing biases. You can avoid that trap through the experimentation process.

N is for Navigation. This is about finding ways to get your solution accepted without getting shut down in the process. How many times have you had a great idea or promising solution that gets buried because it doesn’t fit with the conventional thinking around you? The most successful innovators learn to navigate through the forces that can make or break their project.

“If you torture the data long enough, it will confess to anything.”

3. Don’t underestimate the resistance of the status quo.

Steve Sasson was an engineer at Kodak, known as being the inventor of the digital camera. One day early in its development, Sasson did a demo of his new device to members of the top executive team. But in his pitch he described the new technology as “film-less photography,” perhaps not the best way to connect with people whose careers depended on the sale and processing of film. It was several years before he switched the language to “digital film” and got a much better reaction.

This is not unusual. Great solutions get squashed all the time because they clash with the core paradigms and beliefs that are in place, or because they don’t fit the prevailing business lines or business models. All the big vacuum manufacturers rejected James Dyson’s bagless vacuum cleaner, not because it didn’t work, but because by eliminating bags to sell, it challenged their revenue model. As an innovator, you must learn to frame the opportunity you’re working on in a way that does not trigger such allergic reactions.

For example, Jonathan Ledgard was developing drones to transport medical supplies to hard-to-reach areas in Africa. He met resistance from local villagers, who were used to getting their supplies delivered the old-fashioned way, by donkey. So Ledgard took to calling his drones “flying donkeys,” which led to much greater acceptance of his idea.

“Great solutions get squashed all the time because they clash with the core paradigms and beliefs that are in place.”

4. Innovation is not a race.

When we study real accounts of innovation, we find that breakthrough ideas take time to germinate, and their development is often preceded by long spells of reflection or incubation. Take the case of Malcolm McLean; he was a truck driver in the early 1940s who was frustrated by how long it took to load goods from his trucks onto ships. This frustration germinated for some 15 years before McLean developed the modern shipping container, which revolutionized international transport. What people may perceive as unnecessary delay or procrastination may in fact simply reflect the time that successful innovators need to process information, make sense of the world around them, and come up with better solutions to problems.

To be creative, we all have to learn to disengage from what we’re currently doing, pause, and reflect. That’s a form of procrastination that we call levitation in our book. When things don’t seem to work out the way you want, take regular time-outs to give your mind a chance to identify the sources of blockage and find new and creative ways to deal with the situation at hand. Or take a walk—some of the most fertile minds in history, including philosophers and writers such as Kierkegaard, Thoreau, and Dickens, regarded walks as rituals sacred to their creative routines. At a minimum, block time for breaks and reflection in your agenda.

As Daniel Pink, author of When and Drive suggests, professionals take breaks, and amateurs don’t. Breaks are part of performance, not a deviation from performance, so organizations must learn to treat breaks with greater respect.

“Some of the most fertile minds in history, including philosophers and writers such as Kierkegaard, Thoreau, and Dickens, regarded walks as rituals sacred to their creative routines.”

Great innovators of the past typically had to spend huge amounts of time collecting data and testing hypotheses. Anthropologist Margaret Mead studied tribes in Papua, New Guinea for seven years until she began to understand their ways of living and customs.

Today, we can remotely monitor people and objects in real time through sensors, beacons, and various forms of social listening. We can build digital twins of objects to experiment quickly, safely, and cheaply. We can conduct A/B testing on websites and in factories, which allows for continuous experimentation.

Because they are more powerful than we are and contain fewer biases than we do, digital technologies are more likely to give us an accurate view of the world around us. In one experiment, for example, Lego asked kids to wear tiny cameras around their necks, which would take a photo every 30 seconds for several days. Not surprisingly, the results showed that kids were spending much more time on computer games than their parents had claimed.

Digital technologies can help us detect subtle signals that humans readily miss. For example, computer analysis of millions of records from dating sites suggests that the best predictor of romantic compatibility is not shared attitudes towards family, career, or money, as human researchers expected. Instead, the data showed that couples who gave the same answer to the question, “Do you like horror movies?” stayed together longest.

To listen to the audio version read by co-author Cyril Bouquet, download the Next Big Idea App today: