What Makes a Joke a Joke? Angela Duckworth and The New Yorker’s Bob Mankoff 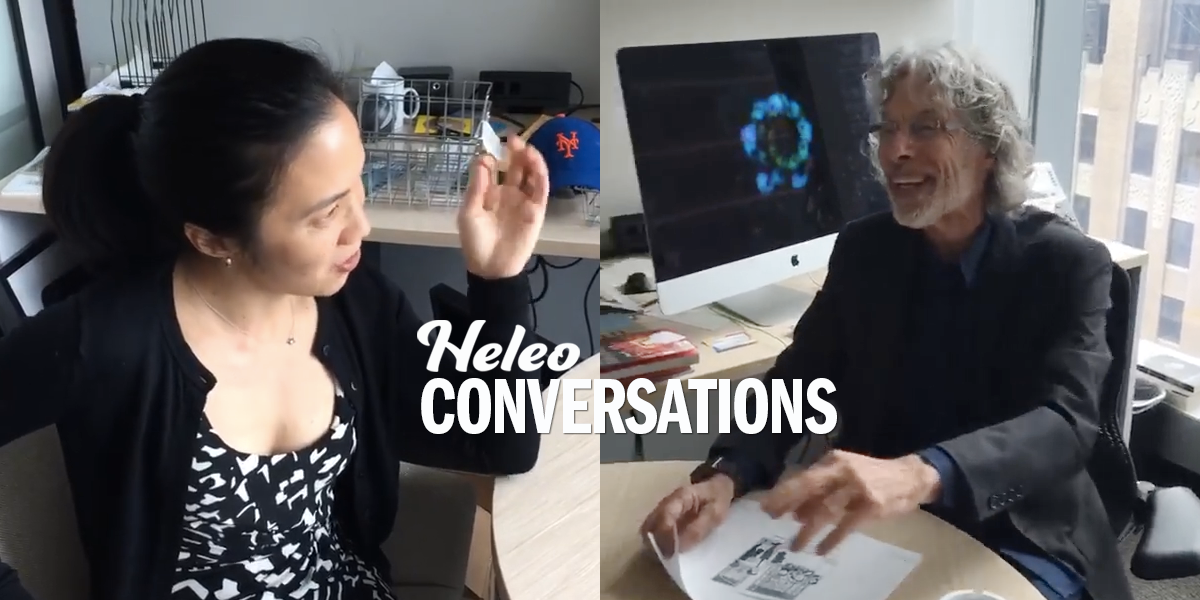 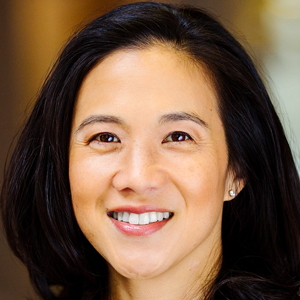 On a recent visit to New York City, Angela Duckworth, author of the bestselling book Grit: The Power of Passion and Perseverance and MacArthur Genius award-winning psychologist, paid a visit to New Yorker headquarters to speak with Bob Mankoff, longtime editor of the New Yorker’s famous cartoons. Duckworth and Mankoff discussed pajamas, Seinfeld, and why it is that we laugh. Heleo came along to stream that conversation to Facebook.

Bob Mankoff: With six billion people in the world, there’s just so much variety in the human population now that, relating to humor and subjectivity, you have to find out what it is that works for you.

Angela Duckworth: Like last night at this very nice party — which you stayed in your pajamas and didn’t come to.

Mankoff: I don’t have pajamas.

Duckworth: You don’t have pajamas?

Mankoff: I sleep naked. I always have. That used to be a question, do you sleep in the nude?

Mankoff: It just seems more comfortable. Why put something else on?

Duckworth: I think there’s a Jerry Seinfeld routine on pajamas, isn’t there?

Mankoff: There’s a Jerry Seinfeld routine on everything.

Duckworth: Yeah, everything. It’s like, “Oh, let me talk about the paperclip…”

Mankoff: He’s got a whole thing. He starts the routine with “I like the Chinese,” something like that. He says, “You’ve got to hand it to them, they’ve seen the fork.”

Duckworth: I haven’t heard this one.

Mankoff: “They’ve seen the fork and still,” he says, “You don’t see a Chinese farmer in a field with two huge pool cues.” With my students, one of the things I [talk about] is, “The difference between Louis CK and Seinfeld.” Louis CK, even though he’s using humor, he’s often making an argument of some sort. Whereas in Seinfeld, it looks like an argument, but he’s not really making an argument. In other words, let’s say you took all the humor out of that and you had a debate at the Oxford Debating Society. Which is, “I believe the Chinese, now that they have seen the fork, should relinquish their obsessive use of chopsticks.” No one would say, “Hey, that’s not a very good argument. There are a million reasons why we use chopsticks.” He’s not making that real argument.

Duckworth: He’s not making an argument, but Louis CK is?

Duckworth: Yeah, which is interesting, the parallels. They both start with the race thing, right?

Mankoff: They start with the race thing but he’s making the argument and–

Duckworth: What is his argument in that one?

Mankoff: Well, he then says, “Look, I’m not saying I’m better because I’m white. I’m saying it’s clearly better to be white. Every time. You want to be right? You want to re-up? Definitely, let me be white.” I mean, he’s being a little bit ironic. He’s talking about white privilege. It is a real argument because then he says, “I could go back in a time machine,” — okay, so it’s part logical argument, part illogical — “I could go back in a time machine to the year one or two, and someone says, here’s your table sir, right here.” Of course, that is not true. It’s not really true that you could go back to the year two and because you’re white everyone’s going to say, “Yeah.” He’s making a metaphoric argument — but he is making an argument. George Carlin might make an argument.

“The interesting thing about humor is that it distracts us logically. It subverts our rational process.”

Duckworth: I was going to ask you, George Carlin seems to be in the category of “I’m making an argument.”

Mankoff: He’s making an argument. The interesting thing about humor is that it distracts us logically. It subverts our rational process. We’re open to accepting it because it’s done in a humorous way. That same argument, in a different context, would not be accepted. You would think of counter arguments. If I use a humorous format, your counter argument can only be a joke. It’d be hard for you to come up with a joke or it would seem sort of–

Duckworth: Inappropriate in a way, right? “Duh, this is a joke.”

Mankoff: It would seem inappropriate of you to say, “Excuse me.”

Duckworth: It reminds me of that article you sent me, whose thesis, if I captured it right, is that humor is a juxtaposition, which could be appraised as a threat but then there’s relief of that threat. It’s not just dissonance, it’s not just, “Oh, this doesn’t make sense to me.” It also has to signal threat and then relieve that threat. I thought, “Done. They figured out humor.” All these bar jokes, New Yorker cartoons…

Mankoff: What they’re missing is the joke part. The joke part is the funny part. What they have is an emotional theory of humor. Which is that it’s wrong or immoral, which is a threat. It’s about morality. If I show you a French army knife where it’s all corkscrews, the funny part is that juxtaposition.

Duckworth: That’s not a threat and that’s not moral.

Mankoff: For instance,in the study, they say it’s a benign violation. I say what makes the violation benign is often that it’s funny.

Duckworth: So they’ve got it reversed. Because it’s funny it’s benign.

Mankoff: First of all, humor is a strange category. Some of the things you see, like prank stuff (in one of those studies, someone pole vaults and the pole breaks), laughter’s probably a very basic response that we have to a threat that turns out not to be a threat. When you look at laughter, there’s this respiratory response that looks like a calming response. There are a lot of videos I can show you: the mom sneezes and the baby then laughs. A startled response and then a laugh. That is not humor. That is one of the foundational responses that we built up. Paul McGee, who wrote a lot on the developmental psychology of humor in children, had the idea that we only really have humor when we have the ability to symbolically have schema and mental [representation].

Duckworth: Before that you can’t have humor?

Mankoff: I think it’s real laughter, in a way. I think benign violation is actually a lot of that. Now, it’s interesting because I know Peter McGraw and I know Caleb Warren, the guys behind the Benign Violation Theory, and I think that forms more of a theory of laughter.

Duckworth: Of which humor would then be a subcategory, right? Because not all laughter’s humor. Can you do it like that, like a pie chart?

Mankoff: Well, one of the ideas is laughter is this very primitive response. It exists in primates and everything.

Duckworth: I think you can tickle a mouse, right?

Duckworth: Will they laugh?

Mankoff: They have what’s called a “play face.” They laugh when they’re roughhousing and it’s a rapid in-and-out. It’s not all in the exhale. Partly, it’s probably a signal that this is just play. Interestingly, chimp laughter is not very audible. Our laughter is very audible, therefore it can do a lot of things. One of the things it can do is signal confirmation. If I laugh at what you say, you like me. You know what I mean?

Mankoff: We’re the only animal who can fake laughter. We have, I would call it, involuntary, mirthful laughter. Then, we have mirthless laughter, we’re laughing all the time after things we say that are a little bit socially incongruent.

Duckworth: That’s also involuntary most of the time, right?

Mankoff: It’s involuntary but it’s learned. And it feels different. We don’t even notice it most of the time. There’s an interesting paper by Mike Gray, who was at Swarthmore, in which he has economists talk about their experiences.

Duckworth: The least funny people in the world, by the way.

Mankoff: Yeah. He keeps note of every time they laugh. They laugh after what they say often, when there’s some little thing that’s wrong between the ideal of what the economy should have been and what it actually is. One thing that’ll drive you a little bit crazy is if you start to listen how often people laugh.

Mankoff: I think a more basic idea than benign violation would just be conflict.

Duckworth: But that article went on to say it’s not just conflict. Because they noted all these cases that introduced conflict but it wasn’t funny.

Duckworth: I think they said tragedy. Being in awe of something.

Mankoff: The way your mind deals with that is through laughter, which terminates it. It terminates this thing that doesn’t makes sense.

Mankoff: Basil Hall, in New Zealand, sent me this long thing about laughter. That it’s an exaptation from this very primitive response in animals. Exaptation is when you take an explanation that makes sense in one area and you use it in another area. His idea is that laughter is one of these things that’s been adopted when we have this irresolvable conflict. Bringing in a William James idea: we don’t cry because we’re sad, we’re sad because we cry. Part of the idea is that once you laugh, once you–

Duckworth: Once you have a physiological response–

Mankoff: Then, you put some narrative on it. One of the ideas is that laughter is the expression of humor. You can look at laughter like sneezing, in that by telling a joke, I caused a cognitive irritation.

Duckworth: It’s the scratch that follows the itch.

Mankoff: No, no. It becomes that. But then, part of has evolved in terms of the cultural narrative of humor, especially in our time, in which we now self identify things as humorous.

Duckworth: Now we have this meta-layer, right? New Yorker cartoons are the ultimate meta.

Mankoff: The meta is taking New Yorker cartoons and saying there’s one caption that works for all of them. Which is, “I’d like you to join my professional network on LinkedIn.” You will laugh at that because I gave you the context. If I show that to a completely naive audience, they don’t understand it. Since someone online created this meme that there’s one caption that works for all, now you start to think of one caption. Interestingly, there’s a meta conflict there, it works and of course, it doesn’t work. Just like the joke.

Duckworth: Which is why it’s funny. If it was fully resolved it wouldn’t be. What do you think happens when it is fully resolved? What is the predictable response?

Mankoff: Well, when things are fully resolved, it’s like a crossword puzzle. You don’t laugh. It’s the answer. In other words, humor looks like a puzzle but it’s not a puzzle. It’s not a puzzle because we solve it instantly.