Is Tinkering an Effective Way to Teach? Here’s How to Turn Creation into Education 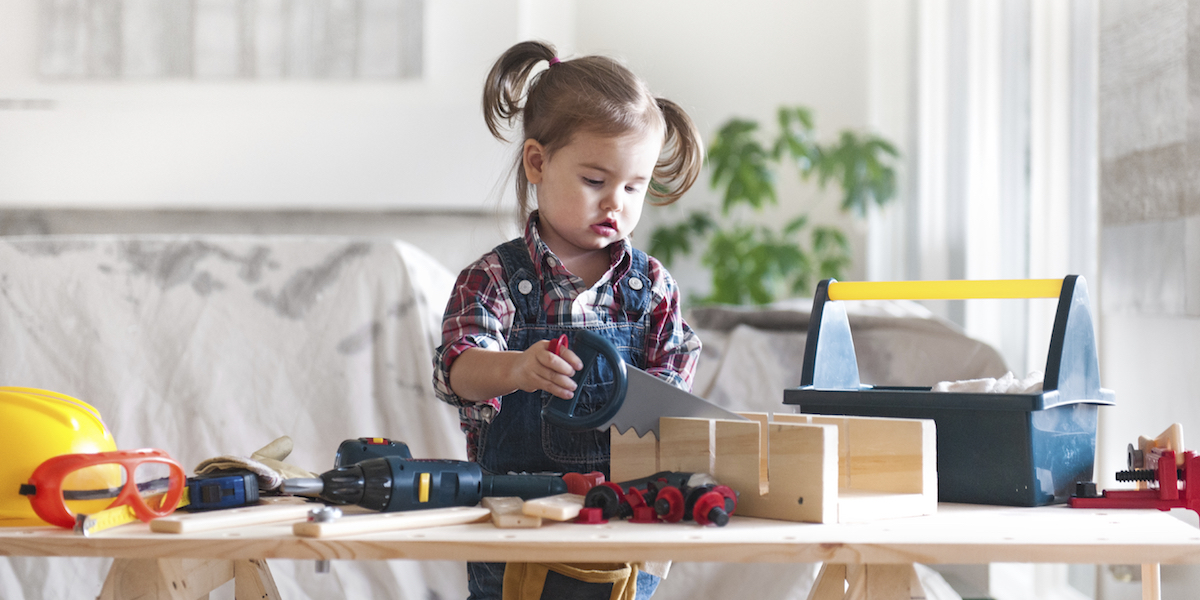 There’s no doubt that students find making to be a creative and engaging activity. But as they tinker, design and invent, are they actually learning anything?

Making is too young a phenomenon to have generated a broad research base to answer this question. The literature that does exist comes from enthusiastic champions of making, rather than disinterested investigators. But there are two well-established lines of research within psychology and cognitive science that can inform how we understand making and help us ensure that making leads to learning. Taken together, these two strands of empirical evidence provide the best guide we presently have for maximizing the learning potential of maker activities.

The first line of research is called cognitive load theory, developed by John Sweller, a professor at the University of New South Wales in Australia, and others. You may recall from a college psychology class “the magical number seven”—the notion that people can only hold seven pieces of information in their heads at one time. In recent years, scientists have determined that our cognitive capacity is even smaller, able to accommodate more like two to four items. So students learn best when they aren’t grappling with too many ideas.

This argument has relevance for student makers in two ways. First, cognitive load theorists warn that activities that are “self-guided” or “minimally guided” (as many maker projects are) may not lead to effective learning, as measured by assessments of students’ knowledge at the activity’s end. Novices are, by definition, not yet knowledgeable enough to make smart choices about which avenues to pursue and which to ignore. Beginners engaged in self-directed projects may also develop new misunderstandings along the way. In all, self-directed maker activities may have students expending a lot of time and effort—and scarce cognitive resources—on activities that don’t help them learn.

Second, cognitive load researchers caution that learning and creating are distinct undertakings, each of which competes with the other for limited mental reserves. Absorbing and thinking about new knowledge imposes a significant cognitive burden, as does pursuing a specified goal (for example, building a model airplane). When students are asked to do both at once, they tend to focus on meeting the goal, leaving precious few cognitive resources for the reflection that leads to lasting learning. Student makers may produce a handsome model airplane having no idea what makes it fly. The best way to ensure learning, these researchers maintain, is to provide direct instruction: clear, straightforward explanation, offered before any making has begun.

A second line of evidence is called productive failure. This research has mostly been carried out by Manu Kapur, a professor at the National Institute of Education in Singapore, and has principally concerned mathematical problem-solving. Rather than explain a mathematical concept and then ask students to apply it, as in a traditional classroom, Kapur gives students a difficult problem without any explanation at all. Working in teams, the students are tasked with devising as many potential solutions as possible. Typically, such students do not arrive at the textbook or “canonical” solution—but instead generate more inventive approaches. Only then does Kapur step in and offer direct instruction on the best way to solve the problem.

Kapur has found that presenting problems in this seemingly backwards order helps those students learn more deeply and flexibly than subjects who receive direct instruction. Indeed, the teams that generated the greatest number of suboptimal solutions—or failed—learned the most from the exercise.

This happens for three reasons, Kapur theorizes. One: Students who do not receive teacher instruction at the outset are forced to rely on their previous knowledge. Research shows that “activating” previous knowledge leads to better learning, because it allows us to integrate new knowledge with what is already stored in our brains. Two: Because the learners are not given the solution to the problem right away, they are forced to grapple with the deep structure of the problem—an experience that allows them to understand the solution at a more fundamental level when they do finally receive the answer. And three: Learners pay especially close attention when the instructor reveals the correct solution, because they have now thought deeply about the problem but have failed themselves to come up with the correct solution. They’re eager to find out what it might be, and this eagerness makes it more likely that they’ll remember it going forward. The best way to ensure learning, Kapur maintains, is to deliberately “design for failure.”

Now, neither of these approaches may, at the outset, hold much appeal for maker enthusiasts. Making is concerned with learning through creating—not through lecture-style direct instruction. Also, maker culture is about promoting a sense of competence and mastery—not deliberately setting up learners for failure. Moreover, don’t these two lines of research contradict each other? One advises instructors to tell learners what to do upfront, and the other prescribes just the opposite.

On closer inspection, however, these two bodies of evidence actually complement each other. Some tasks, like those concerning basic knowledge or skills, are better suited to direct instruction. It may be better to provide explicit instruction on how to operate a 3-D printer, for example, than to have students figure out the directions on their own. We should tell student makers exactly how to perform straightforward tasks, so that they can devote cognitive resources to more complex operations. Meanwhile, tasks that themselves demand deeper conceptual understanding are likely to benefit from a productive-failure approach. In such cases, we should organize makers into groups and ask them to generate multiple solutions.

Incorporating insights from both methods can help ensure that maker activities produce real learning. By applying cognitive load theory to making, we can “unbundle” learning and creating—at least at first—so as to reduce cognitive overload. Instead of asking learners to learn and make at the same time, these two activities can be separated and then pursued sequentially. Makers working on that model airplane, for example, could carefully inspect a previously assembled plane, examine a diagram of it, and then watch as we put one together, explaining as we go, before attempting to make one themselves.

Once students begin making, we can carefully scaffold their mental activity, allowing them to explore and make choices but always within a framework that supports accurate and effective learning. The scaffolding lightens learners’ cognitive load until they can take over more mental tasks themselves. This approach actually dovetails with the apprenticeship model that inspired the maker movement: the student learns to create under the guidance of a master, taking on more responsibility as his skills and confidence grow. And, rather than relying entirely on his own intuitions, he has models to inspect and emulate—again, especially early on, when the mental demands of learning are high.

Applying the lessons of productive failure to making, we can immerse students in a maker task with minimal prior instruction. Students should be asked to generate as many potential solutions as they can, working in teams to maximize the number of solutions contributed and explored. This initial phase should be followed by direct instruction on the optimal solution—instruction that addresses the students’ own array of solutions, explaining why each one misses the mark. The contrasts we draw between the ideal solution and the learners’ suboptimal solutions do much to facilitate their learning. This approach, too, is fully in tune with the maker approach: it encourages students to play with ideas and materials, without the pressure to find the one right answer.

School librarians who direct maker spaces have found ingenious ways to accommodate the ways in which students learn. At New Milford High School in New Jersey, for example, library media specialist Laura Fleming has created two types of “stations” at which students can work: fixed stations and flexible stations. Fixed stations have “low barriers to entry,” says Fleming; students can walk into the library and immediately engage in the activities set up there, without any instruction or guidance. Fleming’s fixed stations include LEGOs and a take-apart technology area, where students can disassemble old computers and other machines to investigate how they work. These fixed stations are available at all times throughout the school year. Flexible stations, by contrast, are periodically changed, and they involve much more structured guidance from Fleming, who might lead students step by step through an activity, modeling what to do as she goes. Projects at flexible stations have included building a robot and creating cartoons with stop-motion animation.

Fleming has ensured that her library’s maker space enhances classroom learning by doing her homework. “Before I ordered a single piece of equipment [for the maker space], I did a thorough survey of students’ existing interests,” says Fleming. “I also looked for ways that the maker space could supplement areas in which the academic curriculum was thin, or make available to all students activities that had previously been open to only a select group.” The “themes” of Fleming’s maker space include molecular gastronomy, wearable tech, electricity and papertronics, polymers, and engineering inventions.

At the library of Perry Meridian Middle School in Indiana, maker space themes include micro-manufacturing and fabrication, digital music composition, textiles and sewing, and architecture and urban planning. Leslie Preddy, the school’s library media specialist, promotes learning there by encouraging kids to collaborate. “We had a student who became very knowledgeable about video production who went on to lead a workshop for his classmates in the subject,” says Preddy. “When you’re teaching other people, that’s learning at the highest level.” Preddy scaffolds student learning in her maker space by providing “pathfinder guides”—written instructions that structure students’ thinking—and by asking “intentional questions,” queries that help students find a solution without handing them the answer. She also encourages them to embrace failure as an efficient and effective way to learn.

This essay appears in the May issue of School Library Journal. The issue is devoted to making and maker spaces, and includes many interesting articles on the subject—I encourage you to check it out. My own contribution looks at how librarians, teachers, and parents can make sure that kids are learning while they make stuff.