Anxious Eaters: Why We Fall for Fad Diets

Janet Chrzan is a nutritional anthropologist at the University of Pennsylvania. She studies how our social worlds influence our dietary habits and health. Kima Cargill is a professor of clinical psychology at the University of Washington, where she teaches the psychology of food and culture, as well as the effects of consumerism on well-being.

Below, Janet and Kima share 5 key insights from their new book, Anxious Eaters: Why We Fall for Fad Diets. Listen to the audio version—read by co-author Janet—in the Next Big Idea App. 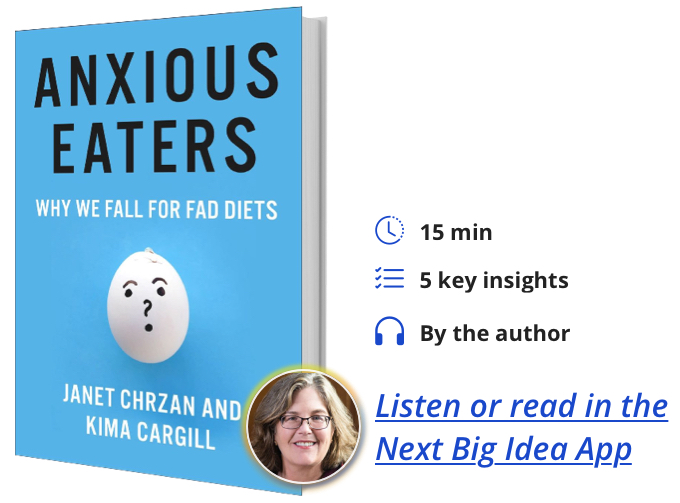 Diets do not become socially salient in a vacuum—they are crafted by cultural narratives. They are almost always of their time and place, and are rational when examined within a cultural system. Most fad diets display cycles of adoption and abandonment as they move in and out of cultural validity. They often have a meteoric rise in popularity followed by a decline. All of these diets promise transformation, healing, and a perfected self. Beliefs, fantasies, and fears drive nearly all diets, even when the diets appear radically different. But fad diets aren’t practices that are broader or historically deep. For instance, veganism and vegetarianism aren’t fad diets. Neither are age-old diet practices like the Mediterranean Diet or keeping Kosher—those are established food systems with deep cultural resonance. Fad diets are, above all, hyped by marketeers and diet gurus who wish to sell books, services, and products.

Fad diets almost always utilize background cultural narratives to justify their assertions, so they depend on established ideas for their appeal. For instance, food addiction theories adopt ideas from Alcoholics Anonymous, assuming that certain foods are addictive and must be avoided for sobriety. Paleo diets articulate a belief in a golden past (fictional, of course) when human habits were conducive to ideal bodies and perfect health. Clean Eating relies on the cultural meanings of the word “clean,” which is considered “close to godliness.” Cultural dichotomies and all-or-nothing thinking allow for rigidly bifurcated worldviews, with all good things adhering to linguistic categories such as clean, moral, and beneficial—in opposition to the closely related bad things, such as dirty, immoral, or unhealthy.

“Fad diets almost always utilize background cultural narratives to justify their assertions, so they depend on established ideas for their appeal.”

Fad diets rely on cultural belief systems in order to weaponize pseudoscientific explanations and create fantastical solutions that are more appealing than the truth. We see this in advertisements for supplements, food substitutions, and clickbait that promise perfect health, cures for aging, and transformation of the self. Desire to practice these diets is transmitted socially. Like fashion, fad diets are a collective behavior that develops within a culture, generation, or social group which people follow enthusiastically for a somewhat short period. These diets have sizable online communities which allow for their viral spread. The community of adherents further legitimizes the diet. Fad diets are a social phenomenon.

What we eat is so conditioned by our social and economic worlds that it is hard to go against that programming. While it’s easy to think through food type avoidance (such as giving up sugar or living a strict keto regimen) once we need to eat a meal, adherence can be very difficult because we eat socially.

First, the idea of what a meal looks like and what it should contain are deeply embedded in socio-cultural norms. It is very hard to disrupt those mental models for more than a meal or two because our idea of a balanced meal is culturally determined. Second, it is hard to be social when following a fad diet. People frequently cycle off of them because they value eating with friends and family. Think about trying to be a Clean Eater when attending a beloved family member’s wedding or a holiday meal. Are you going to avoid grandma’s pumpkin pie—in front of her—just because you aren’t sure if the pumpkins are organic? Fad diets might be appealing in theory, but they often go against the established behavior patterns of what we do with food.

Diets signal politics, class status, and express psychological longings and anxieties. Fad diets fulfill socially important goals. Diets, in general, provide an identity because what we eat serves as a symbol to others about who we are—and wish to be. Fad diets provide status because they rely on the performance of a perfected self and often require expensive ingredients that signify wealth. Adopting these diets provides a sense of bodily purity and demonstrates a capacity for self-control—an esteemed value in American culture. Because of control, fad diets promise transformation into the identity one desires, the body one values, and an aspirational lifestyle.

“Diets, in general, provide an identity because what we eat serves as a symbol to others about who we are—and wish to be.”

Fad diets appeal to specific groups of people because they allow a performance of self, like Paleo and male fitness, or Clean Eating and good motherhood. These groups then form a community of practice that creates a sense of personal identity. People state that they “are” a Clean Eater, or are “going Paleo.” These are powerful descriptions of the self, not of the diet; they are about being, not doing. Most fad diets aren’t about the food, but instead signal group belonging and self-identity—two qualities central to psychological health.

There is a cultural history of self-transformation in the United States, where we see “rags to riches” narratives, reality shows, and the self-made man. Americans are highly individualized and the self is viewed as a lifelong project. Americans’ prioritization of personal growth can be seen in the popularity of self-help books, therapy, and makeover shows. Look at the Paleo diet: it has a strong connection to the desire for longevity, optimal health, and masculine physique. Some of the most popular Paleo influencers are younger men who transformed their bodies from flabby to muscular, or older men who have ostensibly staved off aging through Paleo habits.

Self-transformation is also connected to a belief that consumerism solves problems. We see this clearly in food removal diets, which sharply limit certain foods to avoid illness, reset the body, or enable your best life. These diets involve spending money on special foods, membership to an organization, or the services of a professional. Accordingly, most of these diets require substituting a cheaper food with an expensive one, such as grass-fed, organic meat instead of grains, or almond flour in place of wheat flour.

“Eating a certain way can signal success, wealth, and health.”

Consumption defines the self to others: what you wear, what you eat, the car you drive. These all say something about who you are and how successful you are. Eating a certain way can signal success, wealth, and health. But such behavior—and these diets—are usually only obtainable by the privileged.

5. These diets retain legitimacy by convergence.

The precepts of these diets are similar, so once you’ve tried one, you’re primed for the next. For instance, Paleo encourages belief in Keto, gluten-free, and Clean. The earliest fad diet to reach celebrity status was the Banting Diet of the Victorian period. It was a carbohydrate-reduced diet touted by William Banting, a retired undertaker. He ate four meat and vegetable meals a day, with charred bread and port. He self-published a testimonial-filled book and “doing Banting” became a smash hit—and a foundation for fads to come.

What Banting started has been recycled endlessly: Atkins, Paleo, and Keto all pay direct homage to his original concept. More recently, the Whole 30 mashes together food addiction concepts, low-carb dreams, clean eating fantasies, and specific proscriptions from Gundry, Wahls, and Junger to create a sharply reduced food list for a promised body transformation. These same foods are listed as forbidden by Gwyneth Paltrow in her many Goop publications. Once you accept the premise of the first diet, you are primed to accept the next. That’s why they piggyback their recommendations to create legitimacy and urgency. The Next Fad Diet is almost always a reworking of the Last Fad Diet. In the end, these diets aren’t about the food, they are about transformation into an idealized self.

To listen to the audio version read by co-author Janet Chrzan, download the Next Big Idea App today: