Awakening: #MeToo and the Global Fight for Women’s Rights 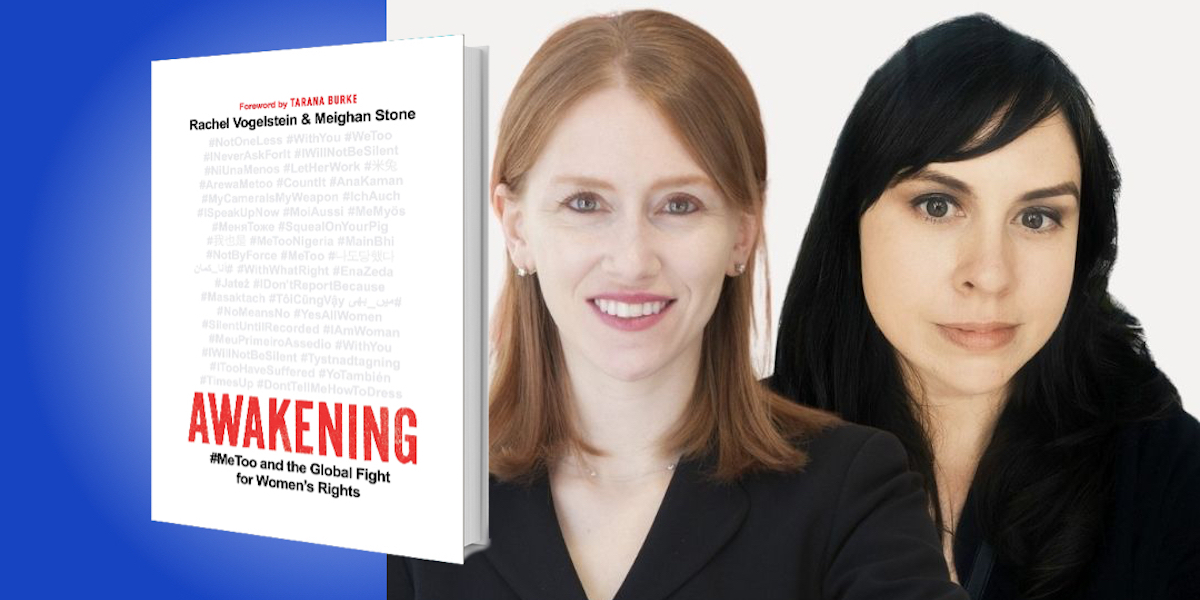 Rachel Vogelstein is the Douglas Dillon senior fellow and director of the Women and Foreign Policy program at the Council on Foreign Relations. Previously, she served as a top counselor to Secretary Hillary Rodham Clinton on domestic and global women’s issues, and during the Obama administration, she was a member of the White House Council on Women and Girls.

Meighan Stone is a senior fellow in the Council on Foreign Relations’ Women and Foreign Policy program. Previously, she served as president of the Malala Fund and was an entrepreneurship fellow at the Harvard Kennedy School’s Shorenstein Center. She has also been selected as one of Fast Company‘s Most Creative People and named to ELLE magazine’s Women in Washington Power List.

Below, Rachel and Meighan share 5 key insights from their new book, Awakening: #MeToo and the Global Fight for Women’s Rights (available now from Amazon). Listen to the audio version—read by the authors themselves—in the Next Big Idea App.

For centuries, people accused of sexual abuse—especially those with the most power—have had the legal system tipped in their favor, while the reputations, sexual histories, and integrity of survivors have been put on trial. This injustice explains why, before the online #MeToo movement could offer both anonymity and strength in numbers, so few women were willing to come forward to name what was plainly happening all around us. Delivering justice for survivors requires a functioning and balanced legal system, one that protects the rights of the accused and survivors, and is free from discrimination and stereotypes about women.

As a first step, governments should ensure that adequate legal protections against harassment and assault are in place in every country. Three years into the #MeToo movement, an astounding fifty countries still have no prohibitions on sexual harassment in the workplace. And even where laws criminalizing sexual harassment and abuse are on the books, too often they are written in a way that prevents justice for women. Legislators should eliminate rules that rig the system against survivors and shield abusers from accountability.

“Three years into the #MeToo movement, an astounding fifty countries still have no prohibitions on sexual harassment in the workplace.”

A power imbalance between genders creates the conditions for sexual harassment and abuse. We’re going to need reform, so let’s start with reforming the law. Today, one hundred countries still have laws on the books that impede women’s participation in the workplace. Restrictions on women’s right to travel freely and unaccompanied by men, to own and inherit property, or to serve as a head of household keep women dependent on male relatives and employers, making women vulnerable to exploitation and abuse.

Some argue that legal gender inequalities reflect deeply rooted social norms that are difficult to change, but evidence suggests that progress is possible. Just think about domestic violence—25 years ago, only a handful of countries classified domestic abuse as a crime, as it was considered a “family matter.” Today, more than 150 countries have laws criminalizing domestic violence. While more work is needed to implement these legal reforms, laws help drive progress by setting new norms—and today, women activists are successfully campaigning to change laws around the world.

Too often, the people who are making policy are neither women nor survivors. So today, many #MeToo activists are taking aim at the political system, either as participants or candidates. In countries like Pakistan, for example, women leaders founded a new political party, called the Women’s Democratic Front. In Brazil, organizers have turned campaigns against sexual harassment into campaigns for political power.

“25 years ago, only a handful of countries classified domestic abuse as a crime, as it was considered a ‘family matter.’ Today, more than 150 countries have laws criminalizing domestic violence.”

Other activists are calling for gender equality in leadership of the private sector, where sexual harassment and abuse have pushed women down and out of the labor force. As Julia Gillard, the first female Prime Minister of Australia told us, “If we genuinely believe that merit and capacity are equally distributed between the sexes, and we look at any institution and we aren’t seeing half male and half female leadership, then that must mean that women of merit didn’t get to come forward.” Representation matters because it works. Research shows that women’s participation not only increases profits and stability—it also increases the likelihood that problems like sexual harassment and abuse will be addressed.

Big talk with no funding means no change, so let’s talk resources. Research from the Association for Women’s Rights in Development found that less than half a penny of every dollar in grants from foundations goes toward women’s rights. Moreover, the 30 top government donors globally only spend 4% of development aid on gender equality, even among governments that proclaim support for women’s rights.

The lack of funding for women’s organizations is particularly short-sighted given how effective they are at producing change. Women’s movements have been a powerful force in changing attitudes about violence against women, promoting economic empowerment, expanding the presence of women in leadership, and advancing democracy. As UN deputy-secretary general Amina Mohammed told us: “Who are the community leaders that really do take the decisions, whether they’re in the homes or the markets? On resources and the impact they need to make, you need to think about the players that will get the most bang for the buck—it ends up being local women.”

“Cultural transformation is undoubtedly a long process, but history teaches that norms can change after hard-fought campaigns for justice.”

Even where strong laws and policies are on the books and adequate resources are in place, deeply ingrained stereotypes about gender roles can block their implementation—and women’s power. It’s time for recalibration.

To shift attitudes, advocates around the world are enlisting new allies to push for cultural reform rather than focusing solely on redress or policy change. Some activists are partnering with cultural influencers to help promote a popular reassessment of women’s leadership and power, while other advocates are demanding instruction in sex education that teaches children from the earliest ages about the importance of consent.

Cultural transformation is undoubtedly a long process, but history teaches that norms can change after hard-fought campaigns for justice. Consider the difference from one generation to the next after the fall of apartheid in South Africa, or the transformation in the acceptability of gay marriage in the United States. The cultural shifts already wrought by the #MeToo campaign promise to be another transformative moment—one in which women not only name their rights, but also demand the power to implement them.

To listen to the audio version read by Rachel Vogelstein and Meighan Stone, download the Next Big Idea App today: