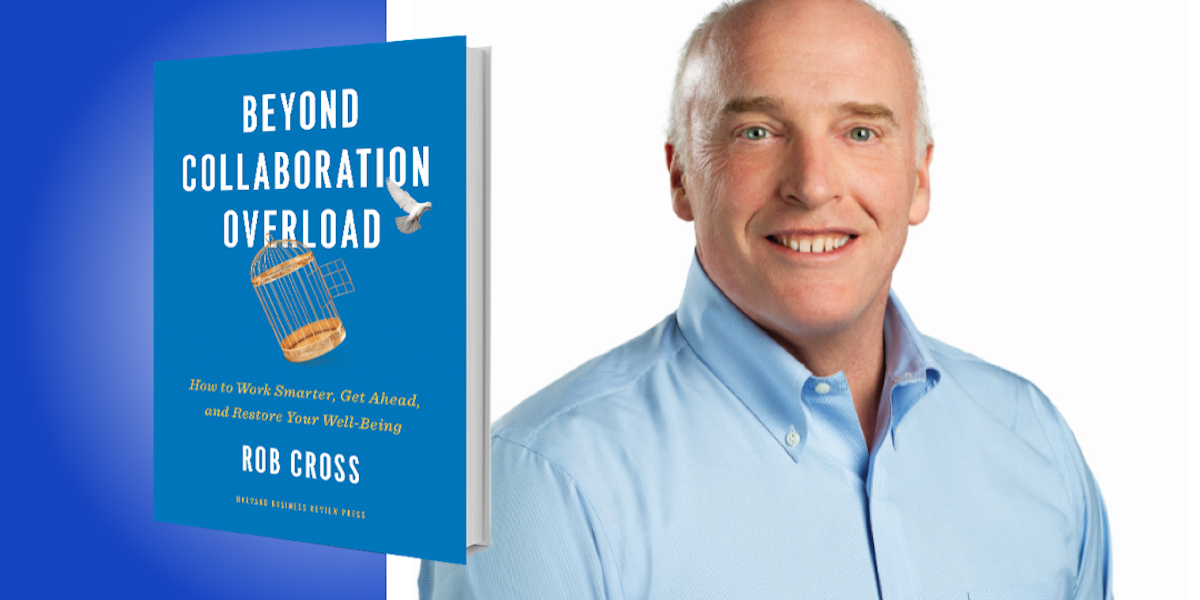 Rob Cross is the Edward A. Madden Professor of Global Leadership at Babson College in Wellesley, Massachusetts. He is the co-founder and director of the Connected Commons, a consortium of over 100 leading organizations accelerating network research and practice. For his new book, he analyzed over 300 organizations and conducted more than 600 interviews in order to quantify the practices of highly successful people.

Below, Rob shares 5 key insights from Beyond Collaboration Overload: How to Work Smarter, Get Ahead, and Restore Your Well-Being. Listen to the audio version—read by Rob himself—in the Next Big Idea App.

1. How high performers create efficient networks: It’s a brawl, not a ballet.

Contrary to the advice in many self-help books, successful people don’t build and maintain large networks. Rather, our research shows that they cultivate more efficient networks that enable them to collaborate in ways that generate innovation and scale in their work.

How do they attain these efficiencies?

First, they become highly attuned to the triggers that lead them to jump into projects when they shouldn’t. For some this meant recognizing when a desire to help led to taking on too much work, and also becoming the path of least resistance for colleagues with problems. For others it was seeing when desire for status led them to jump into interactions or to position themselves more centrally in work than they should. For still others it was fear of what colleagues thought or FOMO. In fact, one of my favorite interviewees described in depth the life-changing experience of turning FOMO (Fear of Missing Out) into JOMO (the Joy of Missing Out).

“Success doesn’t come from one elegant solution. It comes from being dogmatically persistent on three or four practices that can have the greatest impact for you.”

Second, efficient collaborators are better at putting structure into their world. They block reflective time, strategically calendar every week, and plan with both a 1-2 week and a 3-month time horizon in mind.

Third, successful people are more efficient in the interactions themselves. They manage email, run meetings, and create team norms that promote efficient collaboration on a day-to-day basis.

In other words, success doesn’t come from one elegant solution. It comes from being dogmatically persistent on three or four practices that can have the greatest impact for you. It’s better seen as a brawl than a ballet.

The famous “Six Degrees of Kevin Bacon” game provides an example of the benefits of a structurally diverse network. Kevin Bacon is widely connected in the movie universe because he has starred in a broad range of genres: comedy, action, thrillers, drama, family films. In network terms, it is bridging ties across genres—not the raw number of films—that puts Kevin in a central position. In my research, successful people don’t have insular networks, but rather strive to collaborate with colleagues with complementary expertise.

But this insight raises pragmatic questions for busy people. Should you just be out meeting a lot of people from different areas? How much time should you be networking versus doing your work?

The successful men and women I interviewed were intentional about building these kinds of collaborations, and they made time for them by avoiding overload in other areas of their work. When you’re overcommitted and overloaded, exploring your broader network is one of the first things to go. But these are the collaborations that will make you more innovative and impactful.

“Successful people don’t have insular networks, but rather strive to collaborate with colleagues with complementary expertise.”

The very first study I did on high performers was with one of the world’s most respected consulting firms. The managing partner told me early on that she didn’t think high performers were distinguished by being slightly smarter than their peers or willing to work a little deeper into the night or weekend.

She told me: “What differentiates high performers is not a slight increment in IQ but rather that they generate energy and get greater engagement from the network around them. The partners proactively help them, their clients buy more, their peers bring opportunities to them, and their teams give greater effort and create more innovative solutions.”

And she was right! Our research shows that being an “energizer” can be as much as four times the predictor of a high performer as anything else. And this is not tied to personality, or whether you’re an extrovert or an introvert. Behaviors—not personality—are what matter. Energizers tend to do several things more systematically. For example:

Of course, being an energizer requires you to avoid becoming overcommitted. What do you think happens when you get overloaded? Do you come into interactions—with clients, colleagues, your team, or even your family—in ways that generate their energy? Or are you fire-fighting and interacting with too heavy a focus on your own goals?

“Being an energizer can be as much as four times the predictor of a high performer as anything else.”

4. Well-being is a team sport.

How do the relationships in your life, both professional and personal, impact your health and well-being? There is tremendous evidence showing that our sense of purpose and our healthy habits are shaped by our social networks. Lack of close, authentic connections can be as deadly as smoking a pack of cigarettes a day.

The problem is that we are often not taught to think about relational sources of well-being. Why do most people’s New Year’s resolutions fade by January 23rd? Not because they’re not good ideas, but often because we don’t use our social networks to support the behavior—or because we spend time with people who create stress or enable unhealthy behaviors.

Similarly, we are taught to see resilience or grit as an individual characteristic. But if you talk to people about how they weather challenging times, they say they fall back on the relationships they have invested in.

The happiest people in my research—those I call the “ten percenters”—maximized the impact of small moments and activities they were already doing to cultivate more fulfilling connections. They would choose, for example, to not pursue an individual 10k personal best time, but rather to run with their child, the child’s friend, and the friend’s parent. They weren’t seduced by society’s goals, but rather pulled themselves into more meaningful relationships by living more fully through connections in small, day-to-day moments.

5. Reducing micro-stresses in a hyper-connected world.

In the very first of my 100 well-being interviews, I heard a wonderful story about the role of connections in helping a life science executive shift to a healthier lifestyle after a stern warning from her doctor. She went from being sedentary and a self-described workaholic to selecting vacations with her spouse based on where they could run marathons. It was an amazing example of how success came from adapting her network in very specific ways.

“The volume, pace, and diversity of micro-stresses have exploded as our lives are more inter-connected and always ‘on’ through technology.”

On a whim I asked, “What got you in trouble to begin with? To a point that you had to take drastic action?” After a long pause, she said, “Just life, I guess.”

We spent the next hour exploring what this meant and how “life” was—in no small part—composed of an accumulation of small but stressful interactions that had built around her over time. None in isolation were major, but in aggregate they were mind-numbing. I asked other executives a similar question, and many of them reported the same kind of small daily problems that I came to call “micro-stresses.”

They take many forms: a misalignment with a colleague at work, an ambiguous text from a family member. They accumulate around us in ways that are invisible, and many come at us from people we love. But the volume, pace, and diversity of micro-stresses have exploded as our lives are more inter-connected and always “on” through technology.

We experience 15, 20, maybe 30 of these through a day, and are exhausted when we finally turn off the light to go to bed—but we usually can’t quite put a finger on what happened. This is a different kind of stress than one we can label like “nasty boss” or “demanding client.” Our minds are designed to remember the large items, but not the many smaller ones.

So reflect on the micro-stresses in your life, and then do three things: 1) isolate two or three that have become systemic enough that you should address them; 2) reflect on two or three you are causing others; and 3) identify two or three that you are magnifying and making worse simply because of your reaction to them. Happy people are proactive about both reducing the impact of negative interactions and leaning into the positive connections.

To listen to the audio version read by Rob Cross, download the Next Big Idea App today: