The Bezos Blueprint: The Communication Secrets of the World’s Greatest Salesman 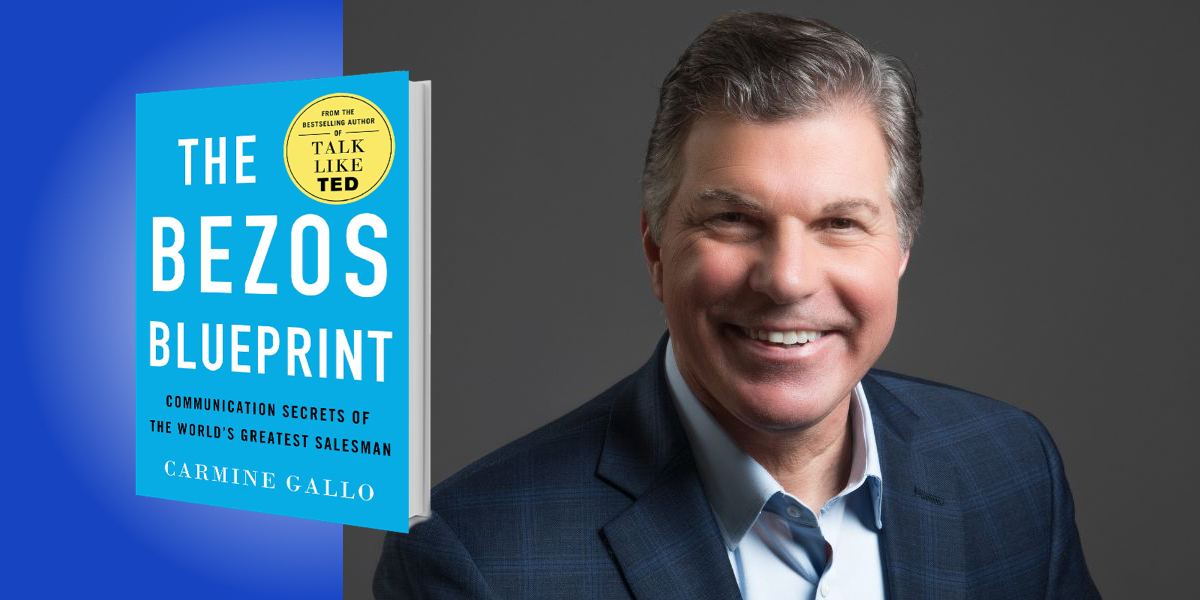 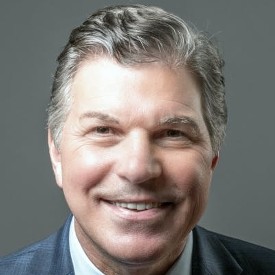 Carmine Gallo is a columnist, keynote speaker, Harvard instructor and CEO communication coach. Gallo is also a former anchor and correspondent for CNN and CBS.

Below, Carmine shares 5 key insights from his new book, The Bezos Blueprint: The Communication Secrets of the World’s Greatest Salesman. Listen to the audio version—read by Carmine himself—in the Next Big Idea App. 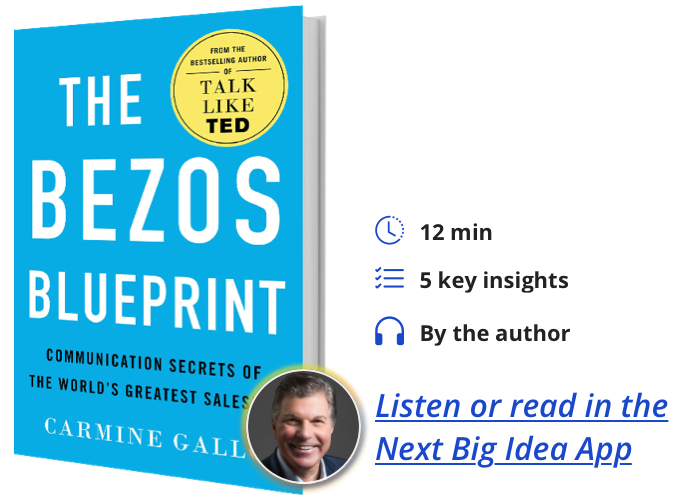 1. Use short words to talk about hard things.

In the summer of 2004, Bezos made a decision that shocked his leadership team. He banned PowerPoint. He replaced slides and bullet points with “narratively-written memos.” In an instant, Bezos had transformed Amazon into a writing culture, a strategy that current and former Amazon executives credit as a key driver behind the company’s success. Bezos encouraged everyone to improve their writing—including himself.

A full 70 percent of the Bezos letters are easy to read for most people with an eighth or ninth-grade education (13 to 15 year olds.) For example, in the 2007 letter, Bezos described the Kindle e-reader for the first time using almost entirely one and two-syllable words. Bezos wrote:

If you come across a word you don’t recognize, you can look it up easily. You can search your books…If your eyes are tired, you can change the font size. Our vision for Kindle is every book ever printed in any language, all available in less than 60 seconds.

Writing at an eighth-grade reading level does not mean you sound like an eighth-grader. You can still express complex ideas and sophisticated arguments, but your reader or listener will expend less brain energy to absorb what you’re saying. Daniel Kahneman, the Nobel Prize-winning economist once wrote, “If you care about being thought credible and intelligent, do not use complex language where simpler language will do.”

When you simplify complex topics, you’re not dumbing down the content. You’re outsmarting the competition.

For centuries, great writers and public speakers have relied on the power of metaphor to mesmerize their readers and listeners. When Shakespeare wrote that “Juliet is the sun,” he didn’t mean it literally, of course. It’s a metaphor, a figure of speech that makes the abstract, concrete. A metaphor compares two different things to show their similarities.

Neuroscientists have discovered that, when we come across a new or abstract concept, our brains kick into gear and begin searching for familiar comparisons. Good communicators do the work for their readers and listeners, using metaphors as instruments for education. For example, Jeff Bezos named his company Amazon after the Earth’s biggest river. Although his startup only sold books at the time, Bezos knew that if books took off, they could sell anything. Earth’s biggest river was a metaphor for Earth’s biggest selection of products.

The naming of his company was just the tip of the iceberg. Bezos also popularized the flywheel effect. Keeping expenses low would lead to lower prices, attracting more customers and third-party sellers, and the cycle would repeat itself. Like a mechanical flywheel, Amazon’s growth would continue to gain momentum as it spun faster and faster.

Bezos didn’t stop at flywheels. He also planted seeds. While some didn’t take root, others grew into massive businesses. He created two-pizza teams and hired missionaries over mercenaries. Aristotle once called metaphor a speaker’s “most formidable weapon.” Learning to wield the weapon skillfully will set you apart from others as you climb the ladder of success.

A company’s mission means very little without a repeater-in-chief who keeps the mission center stage. Bezos played that role at Amazon. In his first letter in 1997, he laid out the principles that would guide Amazon’s decisions then and now. Bezos wrote that “customer obsession” is core to everything Amazon did. Two years later, in 1999, Bezos formalized the company’s mission when he wrote Amazon was on a quest to build “Earth’s most customer-centric company.”

“Once you identify your company’s driving purpose or mission, don’t let anyone forget it.”

Bezos never let his teams forget it. He cited the “customer” 506 times across 24 letters, an average of four times per letter. Bezos repeated the mission word-for-word in nearly every public speech and interview. In 2018, he revealed to billionaire philanthropist David Rubenstein that obsessive focus on the customer was “the secret sauce, the number one thing that made Amazon successful.”

Once you identify your company’s driving purpose or mission, don’t let anyone forget it. Repeat it early and often. When you get tired of it, repeat it again.

When is a chair not a chair? When it’s sitting empty in an Amazon meeting. Jeff Bezos decided to have an empty chair in meetings to symbolize the one person not the room but the most important person to consider—the customer.

Bezos is big on small symbols. For example, visitors to Amazon in its early days found that employees, including Bezos, worked at desks made from wooden, unfinished doors purchased at a local hardware store. Doors were cheaper and symbolized one of the company’s core values: frugality, learning to do more with less.

Chairs and doors are small symbols that carry a lot of weight. “Symbols can be very powerful,” Bezos once said. Tap into the power of symbols to motivate your teams. Convincing people to do the impossible is possible, but it requires every device in your communication toolbelt. So keep symbols on the table, even if your table is really a door.

5. Read (or listen) to more books than your peers.

Three decades before launching Earth’s biggest bookstore, Bezos discovered a small selection of novels that inspired him to dream big. He spent the summers of his youth working his grandfather’s cattle ranch in Texas. The small library in town had acquired some science fiction novels that sparked the young man’s imagination.

“From books, Bezos and his team drew inspiration for many of Amazon’s products—from the Kindle to AWS, Amazon’s giant cloud computing.”

Bezos never lost his love for books. He remained a voracious reader, and even started a book club for senior leaders at Amazon. Like other innovators, Bezos applies much of what he learns to the projects he’s working on. For example, Bezos didn’t come up with the now famous Amazon flywheel effect. He read about the concept in Good to Great, the bestselling management book by Jim Collins. The innovation occurred when Bezos adapted the idea to fuel his company’s growth.

Bezos didn’t suddenly decide to ban PowerPoint. The idea struck after he read a lengthy essay by data visualization expert, Edward Tufte. From books, Bezos and his team drew inspiration for many of Amazon’s products—from the Kindle to AWS, Amazon’s giant cloud computing.

Even Amazon’s now famous Leadership Principles were inspired by a book—Sam Walton’s Made in America. One of those principles is Learn and Be Curious. Successful leaders are learn-it-alls, not know-it-alls. They’re insatiably curious and turn to books to unleash their best ideas.

Never in history has the average person had such easy access to the accumulated wisdom of those who came before us. In print, digital, or audio form, you can order books instantly, download them to your fingertips, or listen to them on your walks. Make books a part of your life’s journey. The authors often make great companions and might provide the spark you need to ignite your imagination.

To listen to the audio version read by author Carmine Gallo, download the Next Big Idea App today: