Black-and-White Thinking: The Burden of a Binary Brain in a Complex World 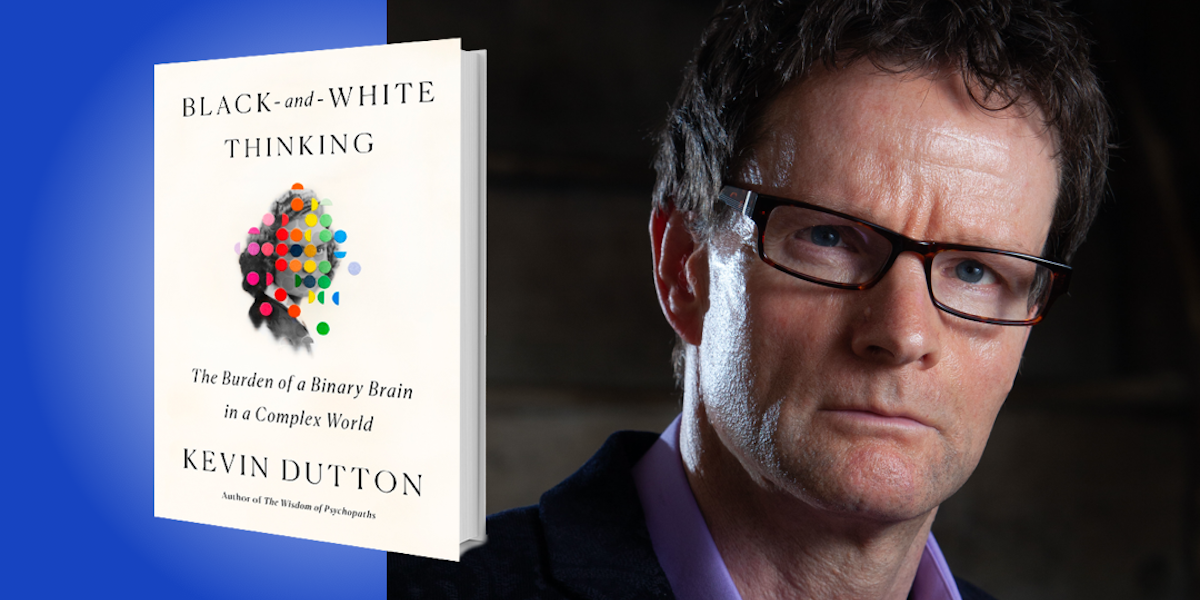 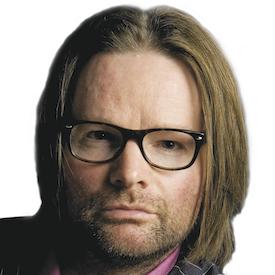 Kevin Dutton is a Fellow of the British Psychological Society and a research psychologist at the University of Oxford. He is the author of Flipnosis and The Wisdom of Psychopaths, for which he was awarded a Best American Science and Nature Writing prize. His writing and research have been featured in Scientific American, New Scientist, The Guardian, the New York Times, the Washington Post, and more.

Below, Kevin shares 5 key insights from his new book, Black-and-White Thinking: The Burden of a Binary Brain in a Complex World (available now on Amazon). Download the Next Big Idea App to enjoy more audio “Book Bites,” plus Ideas of the Day, ad-free podcast episodes, and more.

Next Big Idea Club · Black-and-White Thinking: The Burden of a Binary Brain in a Complex World

1. We’re born with a categorization instinct.

Imagine if you woke up one morning and your brain suddenly lacked the category for a toilet. You’d have a very stressful day, and heaven knows what you’d make of that mysterious seat that came with a full tank of water. If we didn’t have the ability to categorize and make distinctions between different objects—or if, once we’d made those distinctions, we lacked the capacity to store representations of those objects in our memory banks—we wouldn’t be able to do much of anything. We quite literally wouldn’t know our asses from our elbows. To illustrate this idea, imagine going to a library and discovering that the library didn’t have a classification system; books were shelved everywhere and anywhere, irrespective of genre or subject matter. Good luck finding the book you’re looking for!

2. Good psychopaths terrify us because we’ve only met the bad ones.

We like to keep our categories nice and neat and tidy. Preserving order in the library, so to speak, is our brain’s number one priority, because if the books aren’t where they’re supposed to be, then life loses its shape and regularity. Our once-familiar environment becomes alien and unpredictable, and navigating it with any degree of confidence becomes impossible.

“Reality is not black and white—everything from height to IQ comes in shades of gray.”

One experiment demonstrates how well-defined our brain’s categories are, and how resistant they are to change. People were instructed to drink water out of a toilet. Now, this was a brand new toilet—unused, pristine, and the water was completely fresh. But people still struggled to drink from it, because our brains have a category for drinking vessels, and toilets most certainly aren’t in it. Similarly, a book I wrote a number of years ago proved controversial. In The Wisdom of Psychopaths, I argued that certain psychopathic personality traits, such as ruthlessness and fearlessness, could actually be beneficial. Up until then, we’d seen psychopaths as bad and the rest of us as good, but I’d picked up psychopaths and put them on a different shelf—and all hell broke loose.

3. Lines are our drug—we can’t live without them.

We draw lines to form categorical boundaries between physical objects. The category “drinking vessels,” for example, does not include toilets, nor would it normally include objects like buckets and vases. We also draw lines between concepts—between left and right in the political sphere, for instance, or between pass and fail in exams. Unfortunately, however, reality is not black and white—everything from height to IQ comes in shades of gray. So although we draw lines between things to maintain order, manage expectations, and make decisions, sometimes drawing such lines can be flat-out wrong. Roping together all conservative Muslims within the category “extremists,” all Trump supporters within the category “ignorant misanthropic racists,” or all psychopaths within the category “criminals” may be the easiest option, but it’s also known as stereotyping, and can result in bigotry, discrimination, and deep societal divisions.

4. The world’s best persuaders think in black and white.

There are three binary super-categories that are the top dogs of the category world. The first is fight or flight—“am I going to eat it, or is it going to eat me?” Our ancient ancestors didn’t have time to wonder whether a rustle in the bushes was a bear or a bit of breeze, so all rustles were stereotyped as bears, and you got out of there pronto. The second super-category is us and them, and it emerged when our prehistoric forebears began living in small, tight-knit groups in East Africa around six million years ago. The third super-category, right and wrong, developed around 100,000 years ago as an instrument of social control. Once group size began to expand, it became important that self-interest be kept in check in order to resolve conflict and keep the group together.

These super-categories—fight/flight, us/them, right/wrong—are the three evolutionary godfathers of irresistible influence. And today, they’re used by skilled persuaders to get us to do their bidding. To become one of these “supersuaders,” frame your message such that: 1) it makes a person want to fight for a cause; 2) it appeals to a sense of group identity; and 3) it makes people feel that it’s morally right to support you.

“What makes the optimal number of categories for anything is usually a trade-off between practicality and precision.”

5. Our brain has a built-in category “viewfinder” that optimizes experience.

For anything in life, there exists an optimal number of categories, which varies depending on the situation. A good example is color: languages tend to have thousands of color words, but only a handful of basic color terms. English has 11: red, yellow, green, blue, black, white, gray, orange, brown, pink, and purple. Within a certain band of the electromagnetic spectrum, we call a range of colors “blue” because “blue” does the job. It makes life easier most of the time. But our brain has a built-in viewfinder, and it adjusts the settings automatically to suit what we’re looking at. So when we’re trying to find the right shade of blue for our bathroom tiles, that’s when we start splitting color hairs: “Aegean Odyssey,” “Lapis Rock Pool,” “Cerulean Rhapsody,” et cetera.

Indeed, what makes the optimal number of categories for anything is usually a trade-off between practicality and precision. “Look at that pretty flower,” says the little girl to her mother on a walk. “Look at that ranunculus glaberrimus,” says one botanist to another. (That’s a buttercup, by the way.)