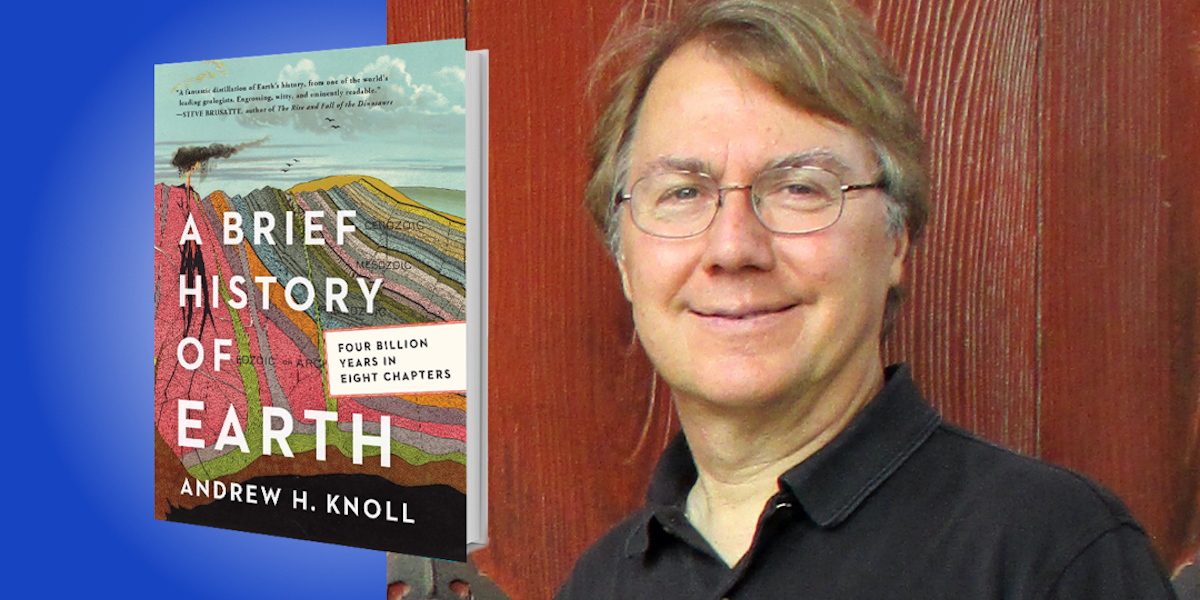 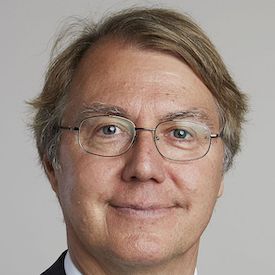 Andy Knoll is a professor of Biology and Earth Science at Harvard University. He has spent his career trying to understand the intertwined histories of our planet and the life it supports. Over the years he has conducted field research on five continents, examined some of our planet’s oldest (and youngest) rocks, and analyzed thousands of geological samples in the lab. His book aims to inspire love and care for Earth by educating us beyond acquaintanceship, and towards truly getting to know our planet.

Below, Andy shares 5 key insights from his new book, A Brief History of Earth: Four Billion Years in Eight Chapters (available now from Amazon). Listen to the audio version—read by Andy himself—in the Next Big Idea App.

1. Earth is a planet that records its own history.

I suspect that most of us have similar thoughts when we peer out over the edge of the Grand Canyon: thoughts of awe and majesty, of the vastness of Nature, and our own insignificance. I certainly feel that way, but, at the same time, I see something else—something inspiring, actually—a remarkable history book laid open for us to read.

Our planet’s history is written in stone, in the chemical, physical and, often, biological features of rocks deposited, injected, or precipitated through time. That history begins more than four and a half billion years ago, as small bits of the early Solar System (cousins of the meteorites that still fall to Earth) aggregated to form a rocky sphere 93,000,000 miles from the Sun. Our infant planet heated to the point of melting, resulting in a central core rich in iron, surrounded by a mantle that slowly convects through time, and is capped by the beginnings of our familiar land surface of continents. Water, nitrogen gas, and carbon dioxide escaped to the surface, initiating the oceans and atmosphere, until life took root. We know this because the story’s been written down in the rocks of Earth itself, of the moon, and of meteorites.

“It is absolutely imperative that we understand our past in order to reckon with the fragile state of modern Earth.”

And that’s just the opening chapter of our planet’s story. What follows is a tale of oxygen and Ice Ages, continents colliding and tearing apart, trilobites and dinosaurs, and, in the very last chapter, us. It’s instructive to understand this narrative for its own sake, but I think it is absolutely imperative that we understand our past in order to reckon with the fragile state of modern Earth. As in human history, Earth’s past provides a framework for thinking about the future—not the indefinite future, but the world our children and grandchildren will inherit.

Early geologists held that the physical Earth has always looked more or less like it does today—similar continents surrounded by similar oceans, shaped by processes that can be observed today. We still subscribe to the part about observable processes, but no longer accept that the modern Earth is representative of our planet as it has existed through time. Our modern planet differs markedly from Earth just 20,000 years ago, when Boston lay beneath two kilometers of glacial ice and mammoths grazed on tundra to the south, as well as from Earth of 200 million years ago, when the Atlantic Ocean was no more than a narrow canyon, just beginning to expand, and dinosaurs were newcomers to landscapes. Or try to envision two billion years ago, when small amounts of oxygen gas had just begun to accumulate in the atmosphere, opening up new possibilities for the bacterial life of the time.

Earth’s long history has fundamentally shaped everything we see and feel around us, from mountain ranges and trenches in the deep-sea floor, to the distributions of volcanoes and earthquakes, or even the salt in our oceans and the oxygen in air—not to mention the diversity of life surrounding us. That history accounts for the fossil fuels that powered the Industrial Revolution and, eventually, catapulted Earth to its current state of rapid change, but also for the lithium, cobalt, and other rare metals that are key to the expanding world of renewable energy. It explains the copper and iron mined since antiquity, and diamonds forged deep inside the Earth and long considered magical. It also illuminates our own biology: Our genes, our anatomy, and our physiology all reflect the long sweep of evolutionary history on an active planet. To really know who we are, and the world we inhabit, we need to understand how we got here.

“Our genes, our anatomy, and our physiology all reflect the long sweep of evolutionary history on an active planet.”

3. Earth and life have co-evolved through time.

For years, most biologists saw evolution as a dynamic process played out on a passive planet. Although, some have suggested the opposite, that our environment is by and large a biological construct, shaped through time by organisms. Not surprisingly, the truth lies somewhere in the middle: Earth and life talk continually, and each has influenced the other through time. To give just one example, for nearly the first half of Earth’s history, life persisted beneath an atmosphere devoid of oxygen—you wouldn’t have lasted five minutes on the young Earth. The transformation to a more familiar oxygen-rich surface required the biological innovation of photosynthesis, which generated oxygen as a by-product, in conjunction with pivotal changes in the Earth’s interior. In short, the birth of breathable air reflects the physical and biological Earth working in tandem.

Earth and life converse using an alphabet that is dominated by six letters: C, H, O, N, P, and S, chemical shorthand for the principal elements of life. Actually, the largest reservoirs of life’s elements lie in rocks, in the oceans, and in the atmosphere. Through time, a combination of biological and physical processes cycle them between organisms and the physical Earth.

That life not only emerged during our planet’s infancy, but has been sustained for some four billion years and owes much to this continual cycling. It shapes the air we breathe, the climate we experience, and the biological diversity around us. I can’t explain the history of life without embedding it in Earth’s dynamic physical story. I can’t explain environmental history without considering the impact of life. And, critically, we can’t understand 21st-century global change without understanding the cross-talk between Earth and life.

Most species that have ever existed are extinct. They are known to us, if at all, only as fossils preserved in ancient rocks. While extinction may be the expected result of evolution, the geologic record tells us something profound—and in some ways unnerving—about species loss through time. Over the past 500 million years, a large proportion of all extinctions have been concentrated in just five discrete events that caused mass extinctions, meaning a majority of all known species disappeared in that geologic moment.

“Each year humans inject 100 times as much carbon dioxide into the atmosphere as all of Earth’s volcanoes combined.”

Several types of physical perturbation have been connected to mass extinctions. 66 million years ago, a giant impact removed the dinosaurs and many other, less evocative species. More commonly, however, Earth’s catastrophes have been home-made. Notably, the largest known extinction, 252 million ago, resulted from volcanism a million times greater than anything ever witnessed by humans or our immediate ancestors. Life and environment seem robust, yet Earth history shows that when the balance between Earth and life gets out of kilter, our world can become fragile.

5. In the 21st century, humans have become a potent geologic force.

Earth’s past episodes of biological upheaval provide a distant mirror on our own era, which is a rare moment of geologically rapid environmental change. 252 million years ago, when giant volcanoes spewed gigatons of carbon dioxide into the atmosphere, the climate grew warmer, the pH of the oceans dropped (what we call “ocean acidification”), oxygen was depleted in many parts of the sea, and as a result an estimated 90 percent of all animal species disappeared. If you read the news, you’ll recognize that history is repeating itself. Global warming, ocean acidification, and oxygen loss from sea water are all accelerating. There is a difference, however, because this time the culprit is us.

On a number of occasions, I’ve talked to good people who simply can’t imagine that human activities can change the world—we are so small and the Earth is so large, or so the story goes. Yet, in the 21st century, each year humans inject 100 times as much carbon dioxide into the atmosphere as all of Earth’s volcanoes combined. Through fertilizers, we transform as much nitrogen as the rest of life put together. We’ve altered most of the land surface, whether for agriculture, grazing, or urban expansion. And, although less easily noticed, the oceans are changing, as well. As a result, predictions for life’s future based on the geologic past are beginning to play out globally.

Fortunately, since we are the cause of 21st-century global change, we can choose to be the solution as well. In his farewell speech to the American people, George Washington famously warned against “ungenerously throwing upon posterity the burden which we ourselves ought to bear.” Washington was speaking of taxes and the national debt, but his words apply equally well to modern climate change and its consequences. In our present moment of planetary fragility, our responsibilities to our children require a fresh view of the Earth and our place in it. The burden of history—of Earth’s history, and our history—is now on us.

To listen to the audio version read by Andy Knoll, download the Next Big Idea App today: