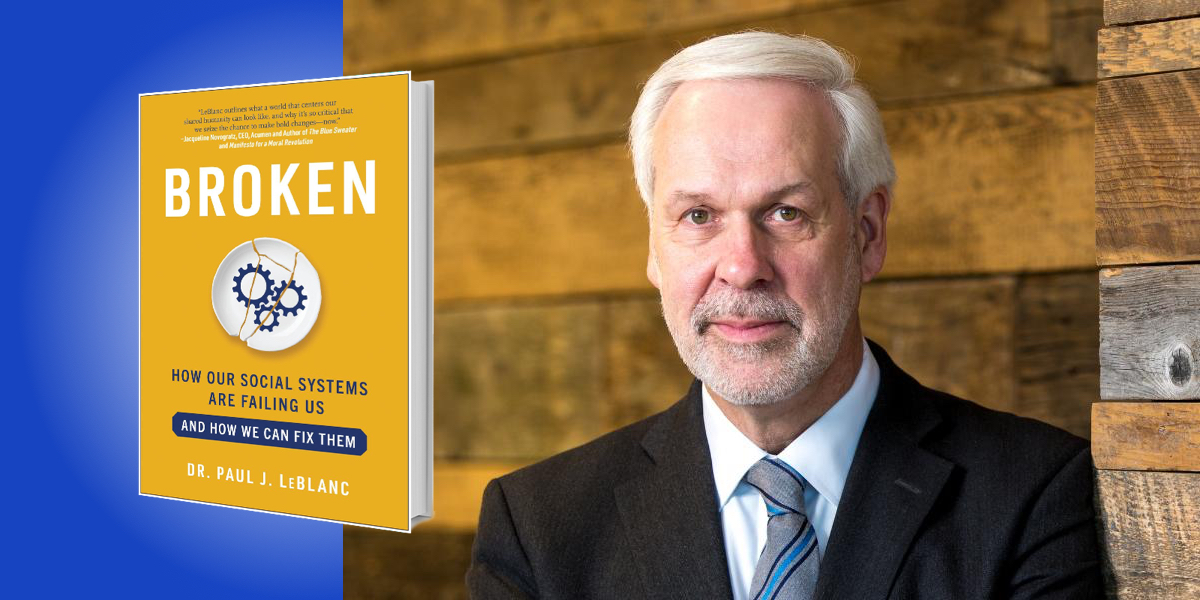 Paul LeBlanc is the President of Southern New Hampshire University, the largest university in the United States, with a mission to improve the lives of those increasingly left behind in an inequitable world.

Below, Paul shares 5 key insights from his new book, Broken: How Our Social Systems Are Failing Us and How We Can Fix Them. Listen to the audio version—read by Paul himself—in the Next Big Idea App. 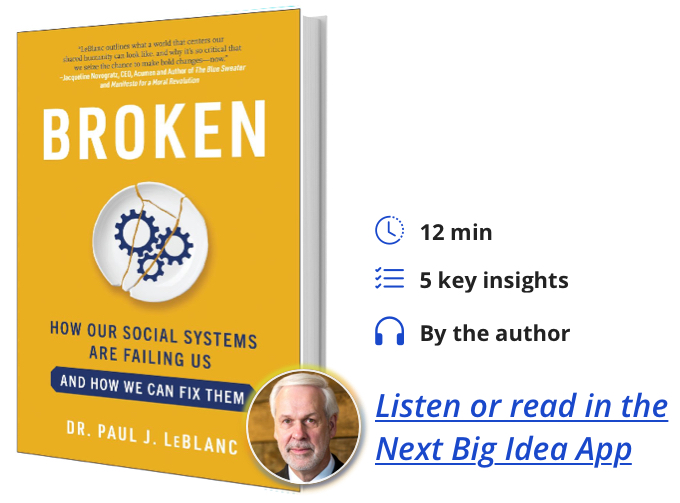 1. People are not systems.

Our scaled systems of care have been shaped by late-stage capitalism, industrial models, and a focus on efficiency, technology, and cost reduction. They have also been shaped by a conservative post-Reagan shift that sees social systems as a necessary evil yielding personal benefits, rather than public and communal good.

Our social systems now seek to remove as much of the human as possible from the work. Technological systems and efficiency crave clear-cut segmentation of people (sometimes called identity management), repeatable processes (called clean data), and as much automation as possible. The underlying business models of such systems reward throughput and scale, but not actual outcomes and success for those served.

When social systems adopt this approach and then segment the work, they lose a rich and holistic understanding of the people they serve. They become increasingly ill-suited to the messiness that is human life, making those served feel unseen and misunderstood.

2. Mattering and aspiration are key.

Broken systems of care lose the two foundational elements required to transform people’s lives, whether in health, education, mental health treatment, or crime: mattering and aspiration. It is nearly impossible for a system to successfully lift someone up if that person does not feel like they matter to the system in which they find themselves.

“While we often focus on poverty of finance, poverty of aspiration can be almost as insidious.”

This notion is rooted in the work of Brown University sociologist Greg Elliott, who studied gangs and why a young person would choose that life. Greg would argue that if an adolescent lives in a home without adequate heat, no one is putting food on the table, and a loving parent is absent, then he can only conclude that he does not matter to anyone there. If he then goes off to a school that has mold on the walls, overcrowded classrooms led by dispirited teachers, studies with out-of-date textbooks, and can’t safely walk down the halls, then he can only conclude he doesn’t matter. If his every encounter with the police is filled with suspicion and outright aggression, then he can only conclude that he does not matter. As Greg asked, is it any wonder that he joins a gang—the one entity that says he matters so much that they will kill to defend him?

The second foundational element in lifting lives is aspiration, meaning helping people dream bigger dreams for themselves. Once someone feels they matter, do we then help them imagine a better future, understand what is required to realize that vision, and then support them to get there? While we often focus on poverty of finance, poverty of aspiration can be almost as insidious. Successful systems of care see people in their wholeness and lift their sights.

Fully seeing someone as human and working with them to realize a better future—the purpose of all social systems—can only happen in human relationships, the very thing that our broken social systems seek to minimize. People whose lives were transformed never say it happened through a system, a technology platform, or a policy. They cite people: a teacher, a doctor, a coach, a supervisor, a counselor, or a peer. Yet in the drive for efficiency, cost savings, and system productivity, systems seek to minimize relationships—the very key to their success. Worse, they dehumanize the people they serve and the people they employ.

“People whose lives were transformed never say it happened through a system, a technology platform, or a policy.”

The current belief is that human interaction—time-consuming, harder to quantify and control, and difficult to measure in terms of productivity—needs to be minimized. Doctors get paid more for seeing more patients in less time. Schools are forced to put more students in each classroom. Counseling for addicts and the mentally ill is limited by insurance companies’ policies. As a result, we can move large numbers of people through social systems. But it is scale without success because it is scale without human relationships at its core.

Dehumanizing systems at scale are a design decision. There are innovators that are rethinking and redesigning systems of care that are built around human relationships, while still achieving scale and with markedly better results than current systems. These systems, almost always built around a personal coaching model, use technology and systems not to drive out human interaction, but to amplify and support it. They use platforms, data, and technology to standardize the non-relational and to support scale, while protecting the space for mattering, aspiration, and relationship.

At a macro-level, many of these innovators are rethinking the value systems that come with late-stage capitalism, with its focus on shareholder primacy, short-term quarterly performance, and maximized profit-making. Broken looks at alternative systems, such as public benefit corporations, platform cooperatives, and even the bold notion of guaranteed basic work.

5. System redesign does not happen organically or through inertia.

System redesign happens when leaders make conscious decisions to build systems based on mattering, aspiration, and embracing the messiness of human beings and relationships. Making people feel like they matter, helping them become a better version of themselves, being in a relationship with them, and taking the time to hear them, see them, and work with them is love.

“We cannot transform people’s lives—the end goal of all systems of care—if we do not love them.”

Rarely do leadership and management books talk about love, but it is required of leaders to rethink systems of care. We cannot transform people’s lives—the end goal of all systems of care—if we do not love them. That begins when people feel loved even when the leadership is not in the room. Then we know we have scaled a system that can humanize and elevate the people it serves.

Broken recognizes that the scaled systems of care upon which a healthy society requires—care for our children, the sick, or those whose lives have derailed—no longer work. But these systems can be fixed. There exist newly designed systems that challenge all of us who lead to mine that endlessly available resource, our most powerful tool for transforming lives and the organizations we lead: love.

To listen to the audio version read by author Paul LeBlanc, download the Next Big Idea App today: