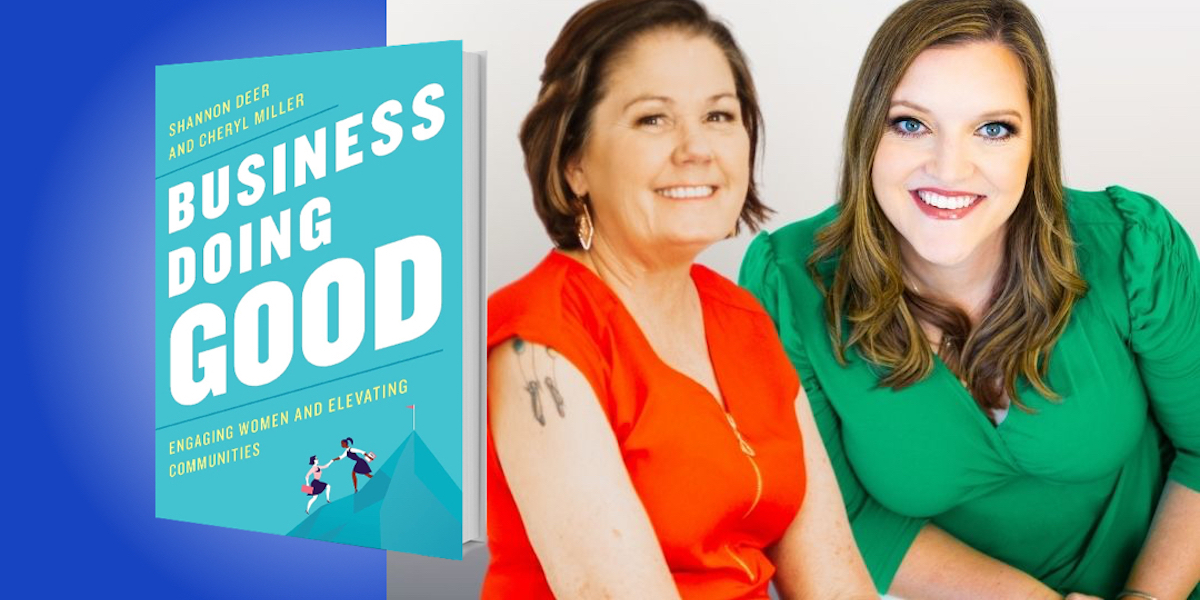 Shannon Deer is a professor at Mays Business School at Texas A&M University. Her research focuses on how business can help solve major social challenges, such as human trafficking. Cheryl Miller owns Quantum Circles Consulting and Training, to aid women in economic development and restorative justice. This comes after she spent 18 years running a housing program for disadvantaged women. Their book provides six principles for businesses hiring “overcomers”—women who have overcome challenging pasts of incarceration, addiction, poverty, or engagement in the sex trade.

Businesses often get a bad reputation for narrowly focusing on increasing profits at all costs, but businesses have a chance to be the solution instead. It is no longer enough to make a product; companies must also make a difference. Investors and consumers demand it as attention to corporate social responsibility increases.

It is businesses’ turn to solve a host of social problems by hiring women overcomers. Business is the answer because businesses have jobs, which are a major key in ending trafficking, lifting women out of poverty, and reducing recidivism. When a woman has a good job that pays well makes her feel respected, she changes her family’s lives for generations.

The best thing about companies hiring women overcomers is that this benefits the women, of course, but it can also positively impact a company’s bottom line. It’s a true win-win. Overcomers can enhance an organization’s diversity by bringing in new perspectives and experiences. Also, women overcomers are oftentimes loyal to their organization, which can reduce turnover. At a time when human capital shortages are plaguing companies, women who have overcome challenging pasts can expand a company’s hiring pool and add value to that organization.

“It is no longer enough to make a product; companies must also make a difference.”

The best way to support women overcoming challenging pasts is with a three-point partnership. Businesses must be one point of the partnership triangle. At the top of the triangle are the women themselves, and the last point are nonprofit organizations providing wraparound services to the women.

Having worked in the nonprofit sector, it became very clear that we cannot provide services “as usual.” The most important mold we broke was giving the women we served immediate leadership opportunities in the organization. We had a housing program and a social enterprise, and the women independently ran the social enterprise. They were the leaders and experts, and the experience rapidly prepared them for the job market in a safe place.

Resilience is underrated, or rarely pursued, because it is linked to failure or hardship, which most of us avoid like the plague. But failure and hardships are some of women overcomers’ greatest assets. They have mastered failing and getting back up again. It gives them grit, which is a commodity for any company.

“Having worked with formerly incarcerated individuals and those with long-term substance abuse disorders, I came to realize that they are incredible entrepreneurs.”

One of the women receiving support from Cheryl’s organization was developing a plan to start her own business. A businessman mentor asked, “Do you know what makes a great business owner?” She said she made up a smart answer about margins and he said, “No, what makes a great businessperson is being able to fall on your face and get back up again.” She said, “Oh, I’m good at that. I am soooo good at that.”

Another woman, who was the first to launch a business with support from our organization’s social enterprise and microlending program, found out after a year of operating her business that she needed FDA approval. When she looked into what that would require, she was overwhelmed—so much so that she decided it might be best to shut down her business. I asked her why this particular task was so significant, and she responded that she was afraid she would fail. I laughed and said, “Really, you are afraid of failing? You’ve been failing your whole life; you are an expert at failure. At least this time, if you fail it will be doing something productive. And if you do fail, you can pick it up and try again until you get it.” Several months later, her product was FDA approved.

4. Translation factor is a superpower.

The skills that women overcomers gained in prison, on the street, or working every day in poverty to feed their children can be valuable if translated into business. Anyone involved in the selling of drugs understands the principles of competition, supply and demand, and knowing your customer. When those traits are taken out of a destructive context and translated into lawful business, everyone wins.

Having worked with formerly incarcerated individuals and those with long-term substance abuse disorders, I came to realize that they are incredible entrepreneurs. The skills and work ethic they possess are amazing. The only problem is where those skills were focused. Can you imagine an employee riding a bicycle two miles in the south Texas August heat to get to work? Wouldn’t you love an employee with that kind of drive? I know a woman who did just that, only at that time she was in her addiction and was heading to a local mall to shoplift. Her drive and commitment to make things happen did not go away when the stealing and drugs stopped. She just needed help translating her skills.

“Economic opportunities provide not only income, but also self-esteem and self-worth.”

One former resident talked about how everyone in her family hated her manipulative behavior. She always saw it as a character flaw, until we pointed out that manipulation can be translated into the workplace. Manipulation is a close cousin to motivation, which is a skill all employers seek. She translated manipulation into motivation and used that to push herself and her employees to be their best.

Our society often views the incarcerated, addicted, and poor as disposable—or too far gone to help. But we know otherwise.

Most people who saw Helen walking the streets for over twenty years in our community thought she would become a statistic, either in prison or dying from her addiction. But she sobered up and became our first resident to launch a business through a microloan that was given to her after nine months of sobriety. Today, she is still in business, she also works for a local nonprofit, and she and her husband have bought their first home together.

After five trips to rehab and years of addiction to crack, Susan’s family walked away. As much as they wanted to hope she would change, they all gave up on that ever truly happening. But with the mentorship of Helen, Susan was the second woman to receive a microloan when she was only seven months sober. She launched a successful business, and eventually opened a restaurant. After about five years, when she sold that business, it was doing half a million in sales a year. Helen and Susan were never late on a payment, and both paid their loans off early.

Economic opportunities provide not only income, but also self-esteem and self-worth. A woman who can provide for herself and her family is a woman transformed. Women overcomers’ ability to survive on the streets is a credential. They are experts in skills like resilience, tenacity, problem-solving, and creativity—skills we all want to hire. Changing a life and changing the lives of generations to come is possible. No one is too far gone.

To listen to the audio version read by Shannon Deer and Cheryl Miller, download the Next Big Idea App today: