How Two Adventurers Make Life on the Road a Reality 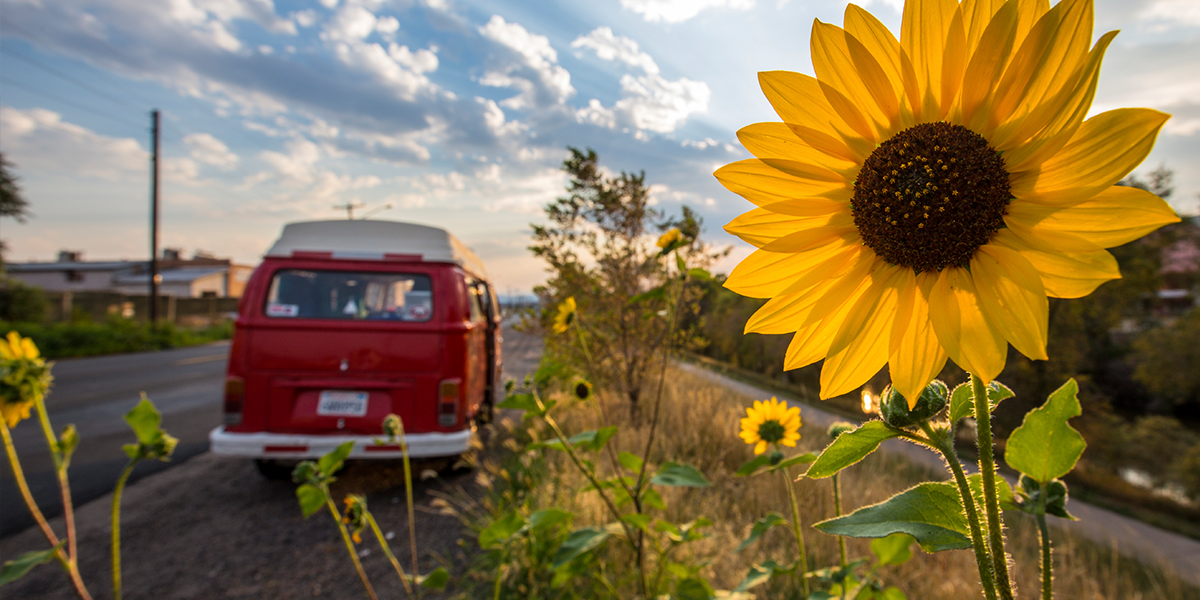 To some, the Dangers certainly live up to their name. They did, after all, quit their jobs to travel the Americas in a 1967 VW bus. But they did far more than travel: they discovered a lifestyle they could bring home with them. Here are some of their stories.

We are Bryan and Jen Danger (and Karma the Wonderdog). In 2012, we set out to drive our 1967 VW Bus through Mexico and Central America. Our mission: to free ourselves from the daily grind.

We planned to be away for just two years. Prepping for our trip and leaving completely changed our outlook and our lives. Now, we find ourselves continually reinventing our path in an attempt to live a life of freedom both physically and financially.

What inspired you to travel?

Jen tried getting me to quit my job and run away with her for years. I just couldn’t find the confidence to do it: it seemed irresponsible and shortsighted. I figured there had to be a reason people that don’t just quit their jobs at 35 and run away. What about our 401k? Our retirement? Our long-term plan?

I was coming around—slowly—until I went in for a routine physical. I felt myself go pale as the doctor suggested I might have high blood pressure. The moment I got home, I fully committed myself to Jen’s idea.

Tell us about an encounter fresh in your mind.

In the Mexican mountains of Michoacan, we were completely removed from anyone or anything but the road that took us there. Without internet access, GPS, or any plan, we had to figure out what to do for the evening. Though most of Mexico is not hostile, locals had warned us about unrest in this area.

We decided to search up a few side roads for a secluded place to sleep. A winding dirt road took us up, up, up, and then opened to a field with a small cabin sitting in the center.

Jen and I discussed the pros and cons of engaging with the owners—with a lot more cons on our list (were we trespassing? Who lived in a hidden shack in the mountains? What types of crops were there between us and them?). We decided to proceed onward in order to turn around.

As we began to rotate the van, we spied a startled woman behind a fence. I slid open a window to apologize in my best broken Spanish for disturbing her, but clearly she believed this sketchy bald man (me!) in a van was an issue.

Jen hopped out of the van and walked to the fence, asking if we could camp for the night. The woman traced her thumb across her throat. She’s going to kill us if we do? Yikes. As she continues talking it what she was really saying sunk in—she was terrified that we will kill HER in the middle of the night.

I let Jen do the talking, and tried to seem less intimidating by laughing at a kitten who was crawling around her neck. I then squatted to take photos of the puppies curled up in wool shavings at her feet. Meanwhile, Jen asked what we could do to prove that we weren’t a menace.

The ranchera explained she lived alone, and had no lights or phone. Then she began to ask questions. “Where are you from? Are you married? Do you have kids? Why did you drive down my road?”

Confused, the ranchera wanted to see this alibi we’d presented. I pulled open the cargo door.

“Que hermosa!” the ranchera screamed as Karma hopped out with her tail wagging vigorously. The woman inspected our bed, then checked our stove. Things shifted in our favor, and she turned to give Jen a giant hug. I was offered a polite handshake, but she was suddenly more worried about our comfort and if we needed anything than about our intent.

Her kitten also bravely left its nest of safety, making Karma a bit stressed about the possibility of losing what little living space she had to a feline companion.

“Would you like a poblano?” Jen offered our new hostess. In turn, the ranchera hurried away to grab a half dozen eggs from directly under her chickens.

“Too many!” We tell her, but she was sure we needed “three for tonight and three for the morning.”

A few hugs later, we thanked her profusely and spent the night at the edge of her road.

In the amount of time it took for sunset to fade from golden orange to black we went from crazy North American throat cutters to welcome guests.

How did you pay for your around the world trip?

Initially, we downsized and did the usual purging-our-belongings and cutting-costs most people employ. That process changed us and we became hooked on minimalism.

Then, we discovered something on the road: we could cut back even more. On the trip, we spent even less money than we did living at home. We could live for a fraction of the price and stare at the ocean all day while having the time of our lives.

We’ve decided to make Portland our home base now, but only pay as little as we did when living out of our van in Mexico.

How do you plan to live such a different lifestyle?

First, we converted our garage into our (small) home so that someone else pays our mortgage each month. We also rent our garage “loft” short-term when we travel to offset expenses. We are now working with neighbors to help them design their own small homes so that they too can adjust their lifestyles through a “creative home use” plan.

Now (while occasionally finding myself wishing for the ability to bypass security lines and relax in first class), we find ourselves with far fewer flights and far longer stays… a fair trade. We’re not travel hackers so much as lifehackers.

So far, our life-hack is working. We are traveling more than ever, are incredibly happy and are excited to see where this crazy path we found ourselves on leads.

Tell us about another memorable encounter you can’t get out of your head.

Standing on a beach in Mexico, a local asked me if I had met Karen.

She was, apparently, the woman I had seen walking her dogs earlier in the morning. The man proceeded to tell me all about her. How she retired from her job in the States and realized she only had enough money in her accounts to survive about nine years. Instead of looking for another job, she moved to this beach, bought a house on the water, and has lived here for 22 years.

My head spun and the lesson stuck with me immediately: There is certainly the option of working harder, longer and sticking with what you know and see around you. And there are plenty of people on that path. But there is also another option that we likely can’t yet see because we are so stuck in our current environment.

Jen’s and my vision (or lack there of) is like walking through a pitch dark forest with a poor flashlight. It seems terrifying because we can’t see the path in front of us, but each time we take a step, the flashlight brings to light a bit more than we saw before. The act of moving forward allows us to see more possibilities and paths than we could before, and somehow our confidence grows.

As we become aware of all the paths around us our pupils also begin adjust to the darkness. We continue making our way through what once seemed like a haunted forest, and it soon looks like a moonlit walk in the park.

What has surprised you while on the road?

Everything. We leapt into the unknown and the world (surprisingly enough) didn’t crash in around us.

I am still shocked that we didn’t have to give up much for everything we gained in our travels and our new lifestyle. It only took a willingness to see the world from a different perspective. To be flexible and to focus on what’s truly important to us.

For us that means collecting experiences rather than things. We aren’t living an impoverished lifestyle or struggling to make ends meet (at least not yet), we still allow ourselves to have fun and splurge when it’s important to us, yet we are living free of jobs and impossibly happy.

I’m constantly surprised at how possible the impossible suddenly seems.

The great debate: aisle or window?

For me, aisle: give someone else the view so I can have the freedom to “roam.”

Leave the charted path and seek your own way. Most of the adventure is in learning for yourself and seeing things that others haven’t.

Make life at home as much of an adventure as life on the road.

The real trick (it seems) is find a way to be just as excited to return home as you were to board the flight away.

We haven’t yet picked our next big destination abroad. We’ve been too busy setting up life at home and traveling locally around the Pacific Northwest. Backpacking, camping, the coast, the mountains—it’s been an awesome adventure simply taking advantage of the great wilderness around us that we never had time to see before.

Stay up to date with Bryan and Jen at The Dangerz.