Robert Barsky is a Guggenheim Fellow and professor at Vanderbilt University. His multidisciplinary research combines social justice, human rights, border and refugee studies with literary and artistic insights into the plight of vulnerable migrants.

Below, Robert shares 5 key insights from his new book, Clamouring for Legal Protection: What the Great Books Teach Us About People Fleeing from Persecution. Listen to the audio version—read by Robert himself—in the Next Big Idea App. 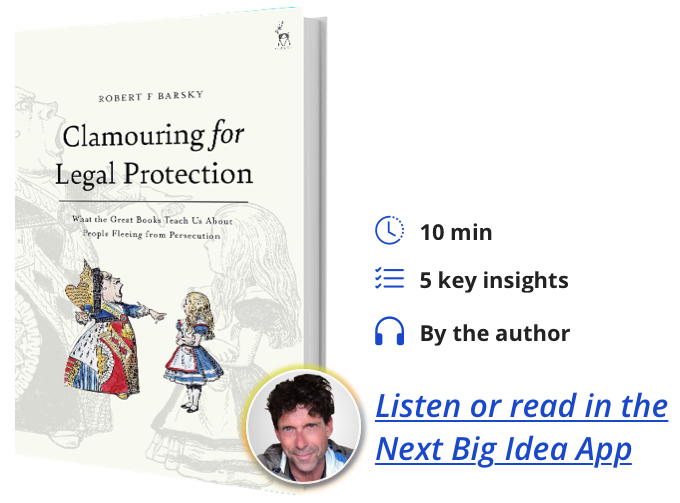 1. Even people who feel the most negatively about undocumented migration can have exceptions.

Generally, these are people that they know well—their roofer, for example, or the people who take care of their lawns, or babysit their children. If we get to know somebody who falls into a category about which we feel negatively, such as the category of undocumented migrants, we’re maybe willing to make an exception for them.

Similarly, we already know Dracula. We already know Dante and Alice in Wonderland. What happens if we imagine that they are living lives that resemble the lives of contemporary refugees? If we empathize with a character like Alice, we say, “Wow! What an amazing adventure,” and then think, “That’s not unlike an adventure that an undocumented migrant or a refugee might face. Maybe these refugees aren’t just here to steal the great resources of our country. Maybe they are not dissimilar from these characters I like.”

2. We have a special feeling in our hearts for canonical literary characters.

We love Alice. We admire Dracula. Well, maybe “admire” is a heavy word for somebody like Dracula, but we certainly think of him as a kind of gentleman with some terribly odd habits. What if we think about him as someone who is especially fascinating? When he gets placed into a coffin and floats across the channel to England, he’s a migrant, migrating from France to England—but he’s actually doing so in Transylvanian soil. He’s only able to travel when he’s sleeping on his own soil. What does that say? What does that mean? If we imagine him as a migrant, there’s something fascinating there.

“He’s only able to travel when he’s sleeping on his own soil. What does that say?”

Let’s also think about Milton’s Paradise Lost. At the outset of the story, Satan is a friend to God, but he’s kicked out of Heaven after a war caused by his uprising against God’s rule. Heaven is a kind of perfect place, so we can think about him as leaving a perfect place, and now having to find his way in a very imperfect place known as Hell. Will that jar us into thinking differently about people who come to our country, whatever our country is? They wake up in an entirely new setting, look around, and say, “Oh my goodness, this is unfamiliar. This is a place without my language, without my culture, without my friends.” Is this really that dissimilar from somebody who has been, say, forced out of the Ukraine by Russian soldiers?

3. The canon has a continuing and continued role in our world.

Sure, we are inundated by TikTok and Facebook and Instagram. Yes, people are more likely to see snippets of stories in YouTube videos than they are to plunge into hundreds of verses of rhyme in Virgil’s writings. And yet those texts, I think, maintain their value and importance. They keep a kind of credibility awake in our imaginations. Don’t we all remember when we read canonical works? Of course, canonical works can include Peter Pan, Hansel and Gretel, and much more recent texts, like Beloved by Toni Morrison. Those texts maintain their importance because they’re a currency that’s known.

Even if we haven’t read all of Dante—say we’ve only read Inferno, or we’ve only heard of Inferno—we know that this Dante the Pilgrim goes down into the underworld, where he encounters characters who are being punished. And maybe we’ve never read the Odyssey, but we know about this ancient Greek story of this heroic warrior who is returning home after seven years of battle in Troy. And from that, maybe we have a degree of sympathy. Maybe we’re interested. We’re thinking about what it means to leave a war-torn zone in order to return home. Well, that’s often the story of a contemporary refugee. So maybe we’re learning something, even if we haven’t read the book itself, about contemporary refugees.

4. The idea that “we’re all migrants” hasn’t really shifted the landscape of political thought.

We always hear that line: “We’re all migrants, so we should be sympathetic toward migrants.” Well, that doesn’t seem to go very far. Nor does it go very far to hear that single story of that person you’ve never heard of in a discussion about somebody fleeing from, say, Yemen. It requires so much engagement, so much effort to get to know that person.

“[Canonical works] keep a kind of credibility awake in our imaginations.”

Whereas in fact, we already know many migrants. In fact, we might know these fictional characters better than we know ourselves. We not only know their challenges and the obstacles they face as they travel from place to place—we also know what they’re thinking.

Imagine Frankenstein’s monster, for example, from the work by Mary Shelley that is considered the greatest-selling novel in the history of the world (or certainly among them). We know about the unbelievable challenges that the monster faces on account of his creation, on account of his well-known and well-described ugliness, having been sewed together by Dr. Frankenstein out of many different body parts. But he is also a refugee; he flees after committing murder. He flees Geneva and goes up into the Alps in France. There he is a refugee himself, but he also takes care of a refugee family. And he has to do so secretly because he’s so terrifying-looking that he will frighten the people he’s trying to help.

5. Many of the authors who write about the challenges faced by vulnerable migrants, like refugees or undocumented persons, have been refugees themselves.

Let’s take, for example, Lord Byron. Lord Byron fled England because of his precocious habits, because he was condemned for his homosexuality. So he flees. As he crosses Europe, he writes Childe Harold’s Pilgrimage, and then he writes the great masterwork Don Juan. And Don Juan is very similar to Byron, fleeing because of his precociousness, because of his wanton disregard for authority. Lord Byron travels as he describes his traveler, and his traveler keeps getting into trouble because he doesn’t respect local customs. (And because he’s extraordinarily good-looking—people can’t seem to resist him, which, of course, leads him into more trouble.)

“How do we get into the minds of people who are suffering the pain of displacement? Maybe it’s by going back to the great books.”

In 1816, Lord Byron met with Percy Shelley, and then with Mary Shelley in the summer of that same year. Both Percy and Mary had fled England, as they couldn’t stand the customs, morals, and laws. And 1816 was an interesting year; it was abnormally cold in Europe because of a massive eruption that had happened the year before near Java. Dust was sent spewing into the atmosphere, which lowered temperatures all the way to Europe. So this was not just a story about migration as we think about Frankenstein or Don Juan. It’s also a story of authors who are, themselves, migrants. Mary Shelley, Percy Shelley, and Lord Byron were moving around Europe during an exceptionally cold summer. In other words, climate change pushed them to move around.

How do we better understand the crises we’re hearing about today in Afghanistan, Yemen, and the Ukraine? How do we get into the minds of people who are suffering the pain of displacement? Maybe it’s by going back to the great books, which are filled with characters who, although not always amiable—as in the case of, say, Dracula—are nevertheless endearing and endeared to us. Maybe by thinking about these great characters, we’ll think differently about the real people who have been displaced by violence, suffering, want, need, or even wanderlust, and who are now in our midst.

To listen to the audio version read by author Robert Barsky, download the Next Big Idea App today: