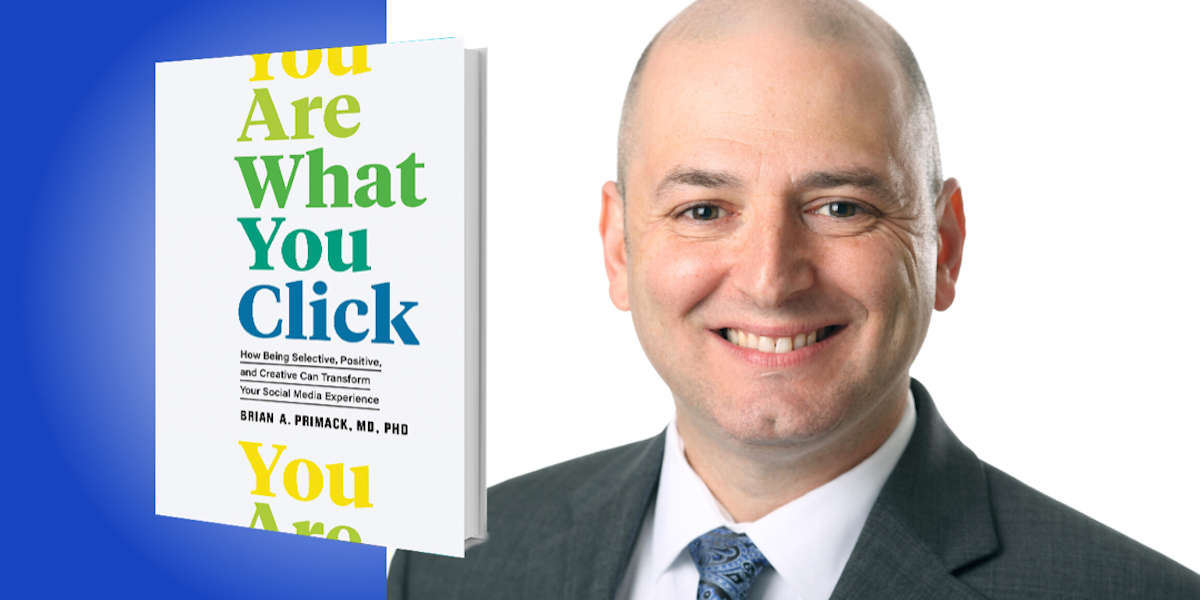 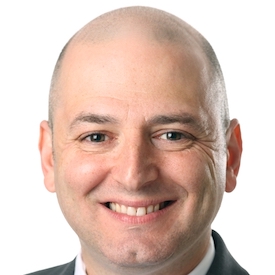 Brian Primack is a social scientist who studies the relationship between media and health. His research team has been exploring this relationship for a couple of decades, but a personal and community tragedy convinced Primack that social media may be the sharpest double-edged sword of our era. His book builds a “social media pyramid” that demonstrates a fruitful, balanced relationship with social media.

Below, Brian shares 5 key insights from his new book, You Are What You Click: How Being Selective, Positive, and Creative Can Transform Your Social Media Experience. Listen to the audio version—read by Brian himself—in the Next Big Idea App.

1. On social media, two does not equal two.

One of the most common questions I’m asked is the recommended maximum amount of time people should spend on social media. When I respond by asking them the number of platforms they use, they usually look at me like I have three heads. Why should the number of platforms matter? Two hours is two hours, right? Well, on social media, two does not equal two.

Let’s say you and I both use social media about two hours a day, we do the same kinds of things on social media, and we’re matched in every other way. In fact, the only thing different between us is that you divide your two hours among two different platforms, but I divide mine among seven different platforms. Will this one difference be related to the risk of feeling depressed, anxious, or lonely?

My research team did a national sample of almost 2,000 people to figure this out. We found that, even when you control for the total time on social media, compared with someone using two platforms, a person dividing time into seven different platforms was about three times as likely to be depressed, anxious, and lonely.

“Compared with someone using two platforms, a person dividing time into seven different platforms was about three times as likely to be depressed, anxious, and lonely.”

This surprised people who thought that more platforms might present more opportunities to find support and camaraderie, or to feel more “with it” regarding all the stuff happening in the world. But you can also see why focusing on fewer platforms might be healthier. After all, each platform represents its own idiosyncratic world. If you’re focusing your attention on just two, maybe you can get to know them better. You’re more comfortable and less likely to make some sort of a gaffe. As it is in real life, trying to be really good friends with seven different groups of people might ultimately leave you dizzy and less satisfied.

You’ve probably heard that research shows that people who use more social media are also more likely to feel depressed and lonely. However, you may be appropriately quick to respond that this doesn’t help solve the chicken-and-egg question: Does using social media lead to depression, or does getting depression make people retreat into social media?

There certainly could be some truth to both directions. Some people who get depressed might “self-medicate” emotional health concerns with social media. On the other hand, healthy people who start to use more social media might get more anxiety and depression for various reasons, like replacing valuable in-person interaction with less intimate electronic relationships.

If only there was a major study that looks at these relationships over time… Oh wait, there is! It was published in December 2020 in the American Journal of Preventive Medicine. The study followed a national sample of about a thousand young adults, and looked at both depression and social media use over 6 months. It showed that the amount of social media you used at the beginning of the study was dramatically related to whether you would become depressed over the next 6 months. But people who were depressed at the beginning of the study were no more likely than non-depressed people to start using any more social media.

“Social media use led to depression, but not the other way around.”

In complex areas of social science like this, no one study can prove beyond doubt. However, these results were pretty dramatic, especially because this was a nationally representative study. It seemed to be the chicken and not the egg: Social media use led to depression, but not the other way around. This doesn’t necessarily mean that we can or should eliminate social media, but it does give us reasons to think very carefully about our social media diet.

You might not think of social media as being intimately related to death. But consider that, by about 2065, there are expected to be more Facebook accounts of dead users than living ones.

One of my students wrote a paper called “Their Page Is Still Up: Social Media and Coping with the Loss of a Loved One.” She found that 37% of young adults recently experienced the death of a social media contact who was also a loved one. For some of these people, social media complicated the grieving process. For example, they may have become upset when a social media platform announced—with balloons, confetti, and streamers—that today is the dead person’s birthday.

Conversely, many people also found that social media helped them cope with a death. Sometimes it helped disseminate information about a funeral or service. Other times, old images of the deceased brought comfort. And, still other times, the presence of that page helped friends and family members continue to connect and share memories.

It will be interesting to see how social media platforms change how people deal with death. In the meantime, we should be aware of the presence of this social media cemetery. Many people do seem to appreciate the usefulness of social media as they deal with the death of a loved one. But for others, the cemetery is awkwardly placed among all the pictures of people’s gourmet lunches and cute puppies.

“By about 2065, there are expected to be more Facebook accounts of dead users than living ones.”

Personalized medicine is a big deal these days. I can do a genetic test and use the results to figure out which anti-depressant or blood pressure pill might work best. If someone has a cancer, we can test its genetics and figure out exactly the right cocktail of medications that’s most likely to kill the cancer without hurting the patient.

Through social media, there may be a surprisingly easy way to know about your personal risks from using social media: personality testing.

For example, the “big five” personality test tells you things like whether you’re more extroverted or introverted. We used this test to look at the relationship between social media use and mental health issues in people with different personalities, and the results were useful. Take, for example, the personality trait of “conscientiousness,” which is usually defined as being more organized and reliable. People who are not conscientious aren’t bad people, they just might be a bit more disorganized or lax.

One reason might be related to social media “fails,” as they are called. When businesses make mistakes on Twitter, they can lose millions, and individual users’ fails can lead to losing their jobs, friends, romantic relationships, and dignity. So, we could all use a little extra conscientiousness before we hit the “post” button.

“By making your questions and anxieties conscious, you may be less controlled by them.”

After all, every corner of the display is packed with things designed to whisk your attention from one place to the next. There are screaming colorful icons, heartfelt fundraisers, compelling events, lists of groups, opportunities to immediately chat, copious advertisements, videos popping up—oh yeah, and all the actual posts.

So, is it crazy to even think that we could be mindful on social media? I don’t think so. People use social media between two and four hours per day, so if there is any way we can creatively leverage this time for mindfulness, I think it’s worth it.

Try this: The next time you are on social media, pick one post and just focus on it. Explore it completely. Truly focus on the person’s message and how they worded it. Notice the way you yourself are feeling about it. Then notice when your attention is being pulled away, and gently bring back your attention to whatever you were focusing on.

This kind of process can transform a social media experience. It might help you truly experience what someone has shared, instead of giving everything a cursory glance and moving on. It might make you more likely to develop compassion and empathy, which may even deepen a relationship. Something that could have been very superficial can become meaningful.

Another benefit is that you’re less likely to fall into traps that might make you envious or depressed. Instead of reacting to what you see subconsciously, you’ll be able to laugh at yourself and notice, “There I go again, feeling envious because everyone seems to be posting about nice vacations.” You’ll remind yourself that of course it seems like everyone is posting about vacations, because that’s when you post as well. By making your questions and anxieties conscious, you may be less controlled by them.

To listen to the audio version read by Brian Primack, download the Next Big Idea App today: