Competing in the New World of Work: How Radical Adaptability Separates the Best from the Rest 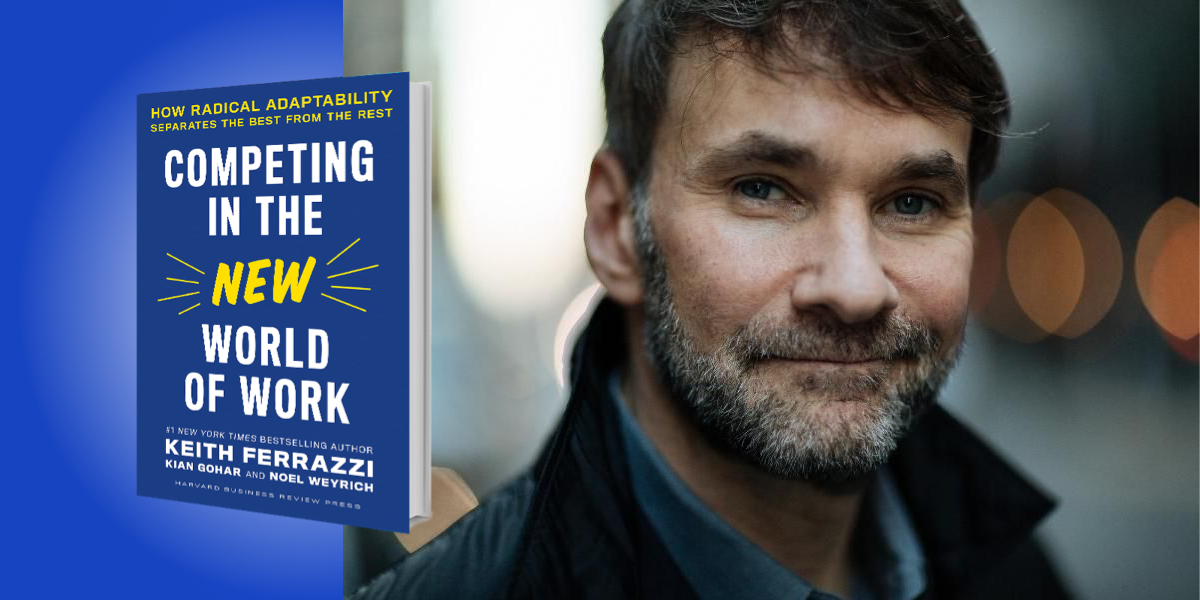 Keith Ferrazzi is the founder and chairman of Ferrazzi Greenlight, a management consulting and coaching company that works to transform many of the largest organizations and governments in the world. A #1 New York Times bestselling author, he is a frequent contributor to Harvard Business Review, Forbes, Fortune, Fast Company, and the Wall Street Journal. Kian Gohar is a former executive director of the XPRIZE Foundation and Singularity University who has coached the leadership teams of dozens of Fortune 500 companies. Noel Weyrich has coauthored and edited more than twenty business leadership books and personal memoirs.

Below, Keith shares 5 key insights from their new book, Competing in the New World of Work: How Radical Adaptability Separates the Best from the Rest. Listen to the audio version—read by Keith himself—in the Next Big Idea App.

1. Never go “back” to work—only go forward to work.

At the peak of the pandemic, we saw this as a huge inflection point, a great opportunity for individuals to redefine strategies, workplaces, teams, and social contracts. But what we are afraid of is that, after this great opportunity, people will crawl out of the rubble and go back to old ways of working that frankly, hadn’t been working for us for decades.

As a result, we convened over 2,000 entrepreneurs, business leaders, and thought leaders, and we asked them about the best practices they were choosing to use—to assure that they reinvented themselves during this critical period of time. From thousands of those best practices, we massaged them and measured their effectiveness, and we came up with hundreds of high-return practices that were measurably successful in transforming workplaces, teams, and organizations.

It’s these high-return practices bundled together that created what we call “radical adaptability,” how to lead in a world that is significantly more volatile than ever before. The most important lesson of all is that this is your opportunity to learn from your peers. This is your opportunity to open up your curiosity, and make sure that you, your team, and your organization never goes back to work, but only goes forward.

2. Collaboration starts before the meeting.

There were two myths of collaboration prior to the pandemic. One myth was that all collaboration starts with a meeting. And the other was that the more people you get involved in collaboration, the slower the decision-making. But that is just not true.

“Instead of sticking to our old ways of synchronous meeting and collaboration, we can use a valuable new set of underutilized tools.”

In fact, we can utilize simple, high-return practices of asynchronous collaboration. There’s a wonderful tool called a “decision board.” Instead of having a meeting, just say, “Here’s the issue we’re struggling with” and then put it in a shared document. “Here’s some possible creative solutions,” and put it on the document. “Here’s some risks and challenges with these solutions,” and put it on the document. And “here are the people I think should be involved today,” and send that out to those individuals. But then let those individuals send it out to who they think should be involved, while at the same time they’re debating ideas in the cloud.

That’s the most powerful takeaway from hybrid work: instead of sticking to our old ways of synchronous meeting and collaboration, we can use a valuable new set of underutilized tools.

3. Resilience is a team sport.

In the olden days, mental and physical well-being were dealt with as individuals, sometimes shamefully in the shadows. But at the peak of the pandemic, we saw more vulnerability. We saw more openness. And with that, we saw more bonding and team cohesiveness. We came up with a word for it that we express in the book called “co-elevation.”

When a team shares openly, the team makes a commitment for shared energy and relationships—they commit to co-elevate, to go higher together. A wonderful high-return practice that we saw is called an “energy check-in.” At the beginning of your meeting, everybody is asked to diagnose for themselves where they are from an energy perspective on a scale of zero to five. Zero means “I’m lying face down in a puddle today, I just have no energy” and five is “I am skipping on rainbows with unicorns.”

“People might otherwise hold those feelings back for weeks, but now they’re willing to share them because of a very simple invitation for shared resilience.”

Everybody enters their number, and then the leader says, “Dave, I saw you put a two. Is everything okay?” And Dave might respond, “Everything’s fine, but the twins were teething last night and I was up late, so boy am I tired today.”

If somebody put a one or a zero, they might say “Well, my spouse just had a diagnosis that our family is struggling with.” People might otherwise hold those feelings back for weeks, but now they’re willing to share them because of a very simple invitation for shared resilience.

Most companies were caught on their heels at the beginning of the pandemic. But not Lockheed Martin, where risk assessment was crowdsourced by everyone. We suggest something that you follow in their footsteps by adding a five-minute agenda item on your team meeting. We call it the “foresight five minutes.” Before a meeting, everybody has been designated to come to that five minutes with a distinct way of looking at the world.

One individual or group is looking at the world relative to competitive threats. Another one is looking at the world relative to technological changes and customer changes and macroeconomic policies And then the question is asked, “What risks and opportunities do we need to potentially move into an analysis meeting?” You can either go around and hear the answer verbally, or you can put it into a shared document.

“There’s great opportunity in inviting foresight from all parts of an organization.”

At Lockheed Martin, prior to the March shutdown in the United States, somebody said “I’ve been reading some blogs about some virus in China. It’s a risk that we might want to move into assessment.” They discussed it in a separate assessment meeting, they moved it into a planning meeting, and they were fully virtual—they had moved out of their headquarters and offices by February. That was unheard of in organizations of their size. In short, there’s great opportunity in inviting foresight from all parts of an organization.

5. We need to move from “crisis agile” to agile as our primary operating system.

At the peak of the pandemic, organizations moved into almost daily agile operating systems. They would identify where they were successful the day before, and what needed to change for today. They would sprint to do that work, and they would assess where they struggled and what they needed to do for the next day. That kind of a crisis agile system was very powerful, and it allowed many of us to survive during the volatility of the pandemic.

Today, we have to negotiate very clear outcomes-based weekly sprints of our work. What are each of us and each of our teams going to do this week? And then you allow empowerment during that week to achieve as much as they can achieve. And then a standup at the end of the week determines, what did we do? Where did we struggle, and where are we going for the next week? There’s a negotiation among the team to make sure that everyone is aligned, and off we go.

We have now moved into an era of volatility, where “agile” is the operating system up and down the organization. Each of our teams need to adopt a simple agile operating practice, weekly sprints, clear outcomes negotiated within those sprints, and empowerment and autonomy during the negotiation of that work for those particular teams.

To listen to the audio version read by co-author Keith Ferrazzi, download the Next Big Idea App today: