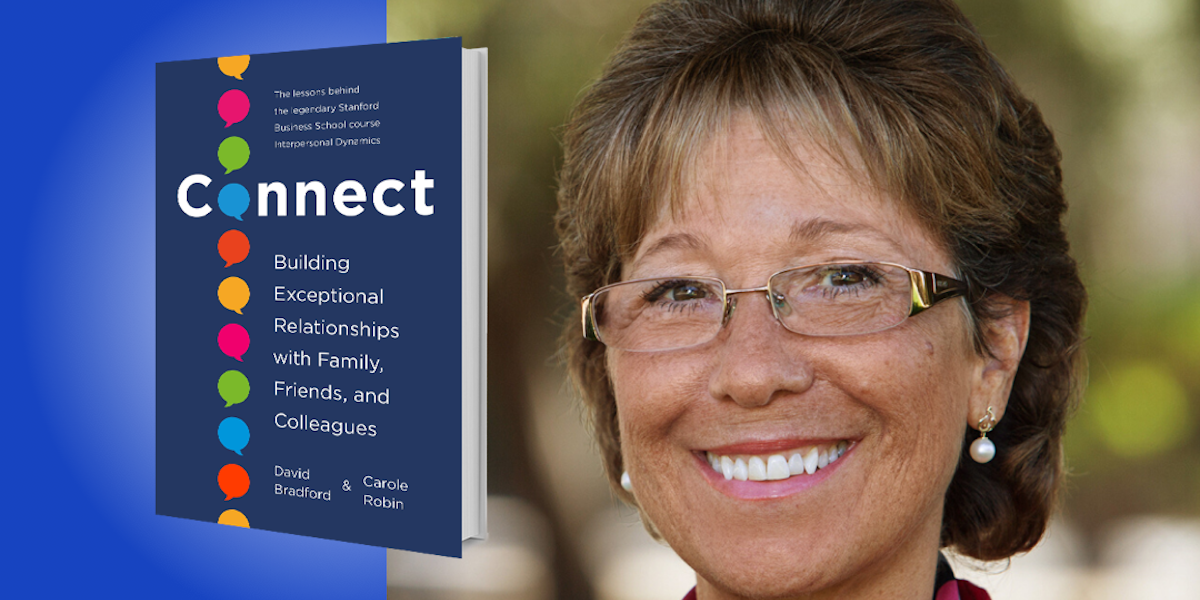 Carole Robin coauthored Connect with her colleague at Stanford University, David Bradford. The book is essentially an expansion off of the legendary course they teach at Stanford Graduate School of Business titled “Interpersonal Dynamics,” but is affectionately known by students as the “Touchy-Feely” course.

1. Moving relationships from superficial contact to real connection is a learnable skill.

Our choices and reactions to a person progress us along a continuum from superficial to real connection, through which we come to feel known, supported, affirmed, and fully accepted. My coauthor has a history of climbing Mount Washington, but due to its difficulty, made sure to never climb alone. He draws from his many partnered journeys up this mountain to parallel what determines a successful progression along the relationship continuum:

Relationships begin on a well-worn trail of light conversation. Soon, the climb becomes more challenging. The trail splits, and you disagree about which fork to take. Then you’re at the difficult steep headwall, and the choices multiply. The climb over the headwall is invigorating, and a beautiful meadow lies before you, filled with summer flowers. You lay your knapsacks down, so you can rest and take in what you’ve accomplished. That’s the equivalent of having moved along the continuum to the point where your relationship feels functional and robust.

Now, you can decide to just stay here—the relationship is already much stronger than it was when you started out. Just getting to the meadow is a challenge that strengthens bonds. All relationships have the potential to reach the meadow, and you have to get here before having any hope of reaching the summit of an exceptional relationship. Exceptional relationships are characterized by those in which we can both be fully ourselves and are willing to be vulnerable, where conflict is dealt with productively, and we are both invested in each other’s learning and growth. Some of this happens on the way to the meadow, but reaching the summit requires even deeper commitment and skill.

2. Disclose 15% of your true self to deepen a relationship.

In order to deepen a relationship, you have to be open to being more fully known. This requires self-disclosure, which creates more opportunities to connect and increases trust. After all, the less you allow yourself to be known, the more opportunity you give me to make up stories about you. And the closer you hold your cards to your chest, the closer I’ll hold mine. But disclosure is not risk-free, and it makes us feel vulnerable. So, how much should you disclose? We suggest the 15% rule.

“In order to deepen a relationship, you have to be open to being more fully known.”

Think of three concentric circles. The innermost circle is your safety zone, where you don’t give what you say a second thought. The outermost circle is the danger zone, which is what you’d never consider sharing in a million years. The circle in the middle is the zone of learning. If you’re worried about venturing into the learning zone with a disclosure, try stepping just 15% outside your comfort zone. You’re less likely to freak yourself, or the other person, out—and you can more easily recover if things go sideways. Once you’ve had a good outcome after stepping 15% outside your comfort zone, your comfort zone will get a bit larger, and you can experiment stepping 15% beyond that. That is how we learn and grow.

A CEO I know has incorporated this lesson into his biweekly executive team meetings. At the start of each meeting, each of the members checks in by taking 90 seconds on a Zoom call to complete the prompt, “If you really knew me right now…” This exercise continuously expands the teams’ comfort zone with each other.

3. Reciprocal curiosity is fundamental to connection.

Curiosity is fundamental to connection. In order to move along the continuum and deepen a relationship, the other person also has to allow you to know them. Since self-disclosure tends to be reciprocal, your own willingness is a place to start, but while reciprocity is a crucial element of self-disclosure, whose job is it to disclose first?

When issues of status are at play, the answer to this question is complicated. Expecting someone who might already be feeling one-down to initiate self-disclosure is a lot to ask. Those in higher-power and status positions need to not only be aware of this dynamic, but also disclose first and to a greater degree than they would with someone of equal status.

For someone else to tell you more about themselves, they also have to know you’re genuinely interested in them. The best way to make sure you’re conveying authentic curiosity is to allow for the possibility that no matter how perceptive you are, you don’t actually know what’s going on for someone else, unless they’ve told you. Inquiry and curiosity require suspending judgment, at least temporarily. Genuine, naive curiosity is likely to encourage the most disclosure.

“For someone to tell you more about themselves, they have to know you’re genuinely interested in them.”

It’s important to note that not all questions are created equal. Open-ended questions widen the scope of a conversation, and typically start with how, when, where, or what. For example, “When was the last time you felt that way? How did you come to see it that way? What is going on for you?”

Closed-ended questions, on the other hand, can usually be answered with a yes or no, and they narrow the conversation. They can also be experienced as intrusive and judgmental. For example, “Don’t you think you’re overreacting?” Or, “Didn’t you already try that twice?”

In general, when inviting someone else to be more known, it’s a good idea to stay away from why questions. When a question begins with the word why, it carries an implicit request for justification. For example, “Why did you do that?” or “Why do you think that?” For this reason, “What is upsetting you?” works better than “Why are you so upset?”

4. Feelings play a critical role in building relationships because feelings give meaning to facts.

Take what happened to me. In 1975, I was hired as the first woman in a non-clerical job by a large industrial automation company, and I learned very quickly there was no place for emotions in the workplace. 10 years and several promotion later, I was running a $50 million business when I got a tad choked up as I passionately spoke to my team about what we could achieve if we all pulled together. After stunned silence, one of the managers said, “Wow, it looks like you’re human after all.” And then I really did burst out crying. “You don’t think I’m human?” What followed was one of the most genuine, rewarding business conversations of my career, in which a lot of feelings were expressed. We realized we’d been leaving half of ourselves, perhaps the most important half, in the parking lot. Had this happened earlier on the job when I had less credibility, confidence, or power, the outcome would probably have not been as good. However, I shed an internalized message that had long ceased to serve me, and that was the moment we became an unstoppable team—and I became a leader.

“A feedback exchange is always two-for-the-price-of-one, an opportunity for both people to learn and grow.”

Emotions aren’t only de-legitimized in business. From a young age we’re bombarded with “shouldn’t” feelings, where we are told we shouldn’t feel certain ways rather than acknowledge and address those emotions. After a while, we have trouble identifying feelings at all, which is why there is a vocabulary of feelings included in our book.

5. Constructive feedback is a gift that is difficult to deliver and receive, but builds stronger relationships.

Admittedly, when it comes to constructive feedback, sometimes the wrapping is so ugly it’s hard to know there’s a gift in there. But ultimately, not calling attention to behaviors that are problematic or detrimental to a relationship can inadvertently perpetuate them. To enrich the relationship, we have to believe that we are both better off if I know when I’m doing something that’s upsetting you.

Giving feedback is a skill that few people know how to do well because most people don’t understand that in any interaction between two people, there are three realities. The first includes your motives and intent. The second is your behavior—what you say and do—and the third is the impact of your behavior on me.

Now imagine a net between your first reality (motives and intent) and your second reality (behavior). Anything over the net is outside the bounds of your three realities. Telling your partner, “You’re not listening,” is over the net because you’re not in their head. Focusing on motives and intent is unproductive, whereas sticking to the two realities of behavior and the impact of the behavior on me is constructive.

Here’s how this works. If I tell my husband he’s not listening to me, followed by saying “I feel you don’t care” (which attributes a motive and is not a feeling at all), then that incites defensiveness that goes nowhere. Instead, I learned to say, “Honey, when I’m speaking and you respond with a grunt and no eye contact, I don’t feel heard. And when I don’t feel heard, I feel sad and distanced.” This enabled us to move into problem-solving. Notice how I stuck to my second and third reality, his behavior and its impact on me, instead of going over the net between my first and second reality. Such an exchange leads to compromise and deepened understanding of one another, both of which form a stronger relationship.

Feedback often says as much about the giver as the receiver. A feedback exchange is always two-for-the-price-of-one, an opportunity for both people to learn and grow.