The Courage Playbook: Five Steps to Overcome Your Fears and Become Your Best Self 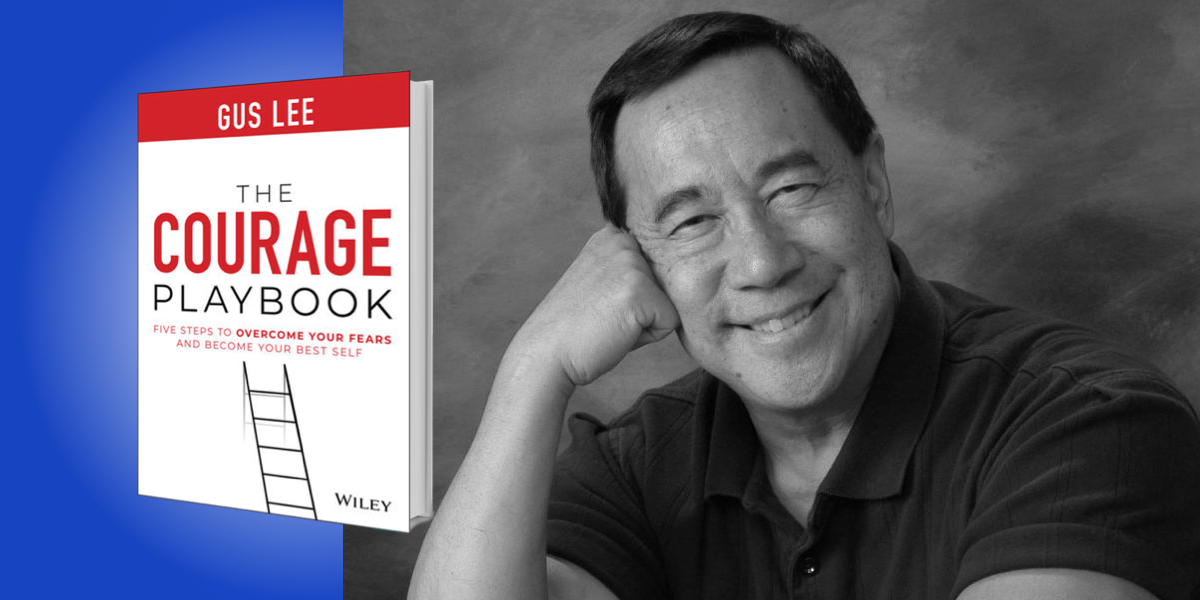 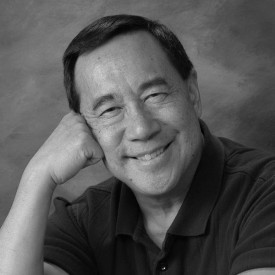 Gus Lee is an ethicist, leadership trainer, executive coach, and author of both fiction and nonfiction. He has consulted for government agencies, Fortune 500 companies, schools, nonprofits, and the military. He has also been a guest speaker on networks such as CBS, PBS, and CNN.

Below, Gus shares 5 key insights from his new book, The Courage Playbook: Five Steps to Overcome Your Fears and Become Your Best Self. Listen to the audio version—read by Gus himself—in the Next Big Idea App. 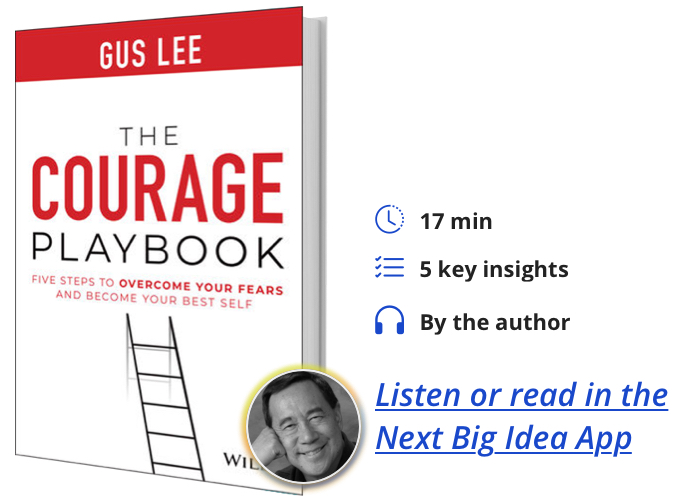 1. Courage makes the biggest difference in the quality of our lives.

I know a lot about this Big Idea because I used to run from it. I was clever but not smart, canny but not wise. I was in denial of my weaknesses, and posed as someone that I wasn’t. Like Wile E. Coyote, I kept defeating myself. I suffered from our epidemic American misunderstanding about how we should treat people, who we should be, what happiness is, and how to achieve it. I was a victim of many fears, and despite my early development of a moral backbone, I slipped into a negative and cowardly posture in life.

Without courage, fears get bigger, life gets harder, and contentment becomes elusive. Even the wealthy can be so fearful of losing status and riches that they can no longer enjoy freedom from material want. No one gets a hall pass away from courage.

Aristotle, who did pathfinding research about how we’re wired, found that courage was our number one human ability. As a recovering coward, I took that as bad news. But I learned that with courage comes kindness, compassion, forgiveness, justice, respect, peacefulness, honesty, and integrity. Famous author J.M. Barrie told college graduates that if courage goes, it all goes. Even love, without courage, becomes resentment, hurt, and anger.

Courage doesn’t mean getting into the grill of a bad boss or kung fu-kicking Thanos in his shins. It is not anger or physical bravery. Courage is a set of behaviors which start in overcoming your fears to make room for courageous habits.

“We need courage because our anxieties want to control us.”

Take, for instance, my first friend in life, Toussaint Streat. We were skinny and poor, but he was wealthy in courage and character. We’d meet a challenge and he’d use courage, respect, and relationalism while I was wracked in fear and flight. He’s a family practice physician who demonstrates courage at home, in his relationships, and at a COVID-stressed, understaffed and under-resourced hospital. He might be the most fatigued person on earth, but he’s courageously calm on gridlocked freeways or out with friends when situations call for courage to guide what we say, how we say it, and what we do. Toussaint has long set the example.

Early on, I often looked the other way, fearing discomfort. A hundred times a day, I lost amazing chances to improve my humanity. We need courage because our anxieties want to control us. Too many of us bend down to honor the major league fears of failure, rejection, or judgement.

2. With the courage to respect all persons, you can snap out of all of your fears.

My client Gary is one of the smartest scientists on the planet and a top exec with a good compensation package and power. But he blamed his woes on the burdens of management, was increasingly unhappy, and felt it was all ganging up on him.

Courage Coaching showed him that he didn’t feel bad because of unions, budgets, and law suits. He was suffering because he was constantly judgmental, disrespectful, and quick to anger. Fear motivated him to deny his weaknesses, make puny excuses, blame others, and chronically lose control over his emotional impulses. I summed up these primary negative behaviors as “the three NOs” of disrespect, anger, and moral hideouts. I challenged Gary to admit and quit them in his personal and public lives. He said, “You’ve got to be kidding.” Gary (like me) resisted making changes that would reduce his unhappiness, improve his relationships, and bring him more peace, love, and joy. The sad part of fear is that we get used to dysfunction.

With encouragement from his family, Gary bravely said NO to his habits of shutting people out, rejecting others’ opinions, and surrendering to impatience and complaining. Try as he did, his willpower slowly slid into wish power, and he found himself going back to his old ways. I asked him to find himself a priceless Battle Buddy—someone who tells you the truth about yourself because they want you to be your best self.

Gary asked a peer to give him a sign (scratch an ear; pretend to cough), if Gary messed up. Soon, the Buddy sent the signal. In private, she gave him a Buddy Check—a tip to repair an observed negative behavior. She did this even when Gary rolled his eyes. Reliable Buddy Checks helped Gary at work, but they made the biggest difference at home. There, his sarcasm and caustic indifference had broken hearts, dispirited children, and ruined meals, sleep, trust, and love itself.

By stopping the three NOs of disrespect, anger, and hideouts we finally have room for courage. But how do we get it? Aristotle observed that we get courage the same way an out-of-shape person becomes athletic: we practice. But today, few learn the required behaviors, and even fewer remember them. This has allowed fear and anxiety to grow like waistlines and credit card debts.

Courage is neutral to race and gender, honors all faiths, and favors no party. It requires neither unique power, specific intelligence, or unusual gifts. To get courage, practice its three forgotten behaviors: “the three GOs.” They aren’t easy, but they’re clear and best taken on one at a time.

“It takes courage to honor people who aren’t the same as us.”

The first behavior of courage is Unconditional Positive Respect (UPR). This means treating all people with equal regard, regardless of feelings. Without UPR, we invite racism and bias. Discussions become conflict; work devolves into struggle; relationships turn into arguments; parenting escalates into a war zone. UPR means empathy for humans who think and act differently, and (like you) can make mistakes. It takes courage to honor people who aren’t the same as us.

As a kid, I feared non-Chinese people and had zero UPR. I couldn’t play sports, tussle, or rap in my African American neighborhood. I boxed with lads of every skin shade except mine. My deep terror of fighting, of other boys, the ring, the conditioning, and the bouts, exceeded my limited English curses and grumblings. But the more I practiced respecting kids who were different, the less I feared them. I got friends, I could box despite my old fears and physical limitations. Toussaint Streat, my first best friend, taught me how to laugh when very little seemed funny. I practiced being okay with kids I didn’t like and who disliked me. I became a peacemaker without racial bias or favoritism.

This is the second behavior of courage—the second GO—and means being considerate and stifling our natural impulse to be self-absorbed. Self-governance is better than self-control or self-discipline, which smack of punishment and prohibitions.

Self-governance starts by recognizing that we universally admire people who remain calm and coherent under pressure.

This is the final GO behavior of courage. It’s easier for us to do the right thing when we remember that we don’t want to be that person who disgusts others by being disrespectful, thoughtless, or self-absorbed. I have a friend who instantly improves how she treats others when she’s told that she’s acting like her ex-husband.

“The risks in life lie not on the journey to your courage, but in avoiding it.”

Whether it’s tennis, piano, or courage, practicing eventually makes doing the right thing easier to execute than doing the wrong thing. My friend Dr. James P. Sullivan says, “A professional is someone who completely quits doing things the wrong way.”

A mentor, the courageous H. Norman Schwarzkopf, taught me that “Knowing the right action is easy. Doing it is hard.” He had me practice doing the right thing, and I missed the ball, hit the wrong notes, and my inner voice whispered, “This is too hard; quit now.” But each time I tried doing the right thing, I began to strike the right keys, and I told my negative self-talk to go away.

Practice giving Unconditional Respect to every person; captain your emotions and impulses; and do the right thing in the face of pressure. Stopping your three NOs and practicing the three GOs makes you more courageous and strengthens your identity.

The risks in life lie not on the journey to your courage, but in avoiding it. For who among us has already conquered fear, mastered courage, perfected one’s true core identity, and achieved complete firmness of character? Who doesn’t want better plays on the great and exciting field of life? I wish you good courage in all that you do from this day forward.

To listen to the audio version read by author Gus Lee, download the Next Big Idea App today: