The Cult of We: WeWork, Adam Neumann, and the Great Startup Delusion 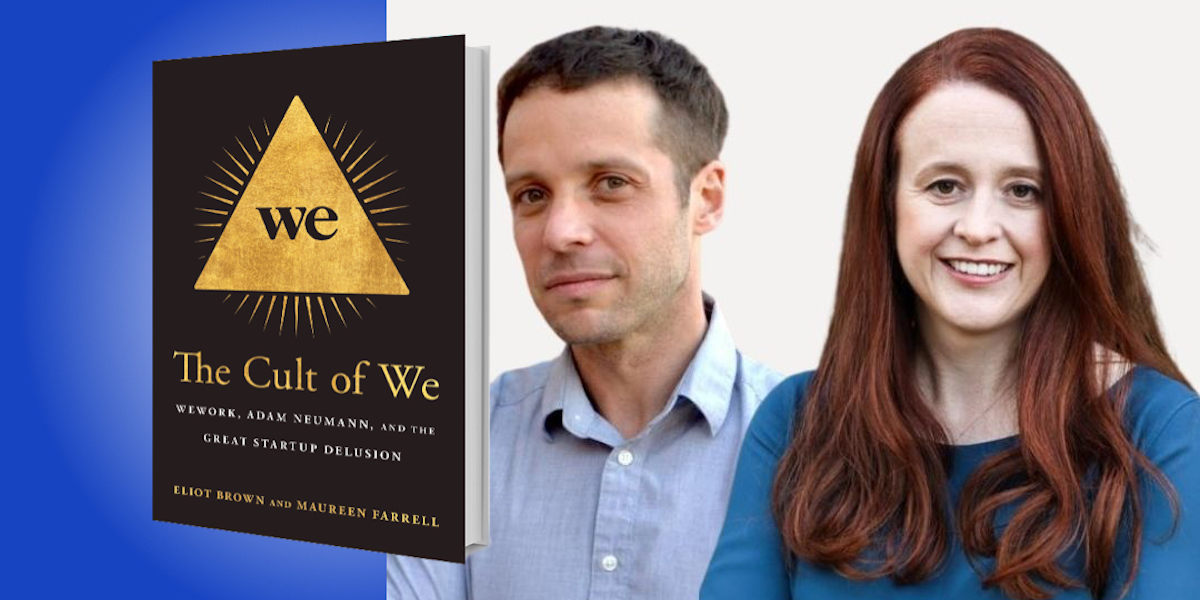 Below, Eliot and Maureen share 5 key insights from their new book, The Cult of We: WeWork, Adam Neumann, and the Great Startup Delusion (available now from Amazon). Listen to the audio version—read by Eliot and Maureen themselves—in the Next Big Idea App.

Adam Neumann raised billions of dollars and recruited some of the world’s top executives, bankers, and investors to aid him in his quest to build an office space leasing company by convincing them all that his company—WeWork—was about something much bigger than real estate.

Adam’s contagious vision was his crucial tool throughout his 10 years running the company—he sold one investor after another on the idea that his office space leasing company wasn’t a real estate company at all, but something far more significant: something that was going to change the world. He not only got these investors to believe him, but they, too, saw the picture he painted for them of the future; the dream came alive in their minds.

The ultimate problem: He couldn’t fulfill the vision in a profitable way.

“We can be convinced of things that aren’t true if the dream is appealing and delivered by a charismatic leader.”

One might assume that the world’s most successful investors make their decisions based on deep dives into a company’s numbers and projections, that they’d base their investment on thorough analysis of an industry.

WeWork captured some of the world’s top investors—Fidelity, T. Rowe Price, Harvard’s endowment, SoftBank—but the main driving force wasn’t WeWork’s underlying numbers, which showed enormous losses. Instead, they were largely following the herd, following the lead of other well-known investors.

What ensued was a collective delusion. When we looked at the 10-year lifespan of WeWork under Adam Neumann, we found that investors often simply ignored the reality of the company, and instead were driven by their own fear of missing out on a potentially amazing investment that their peers seemed to believe in.

The Cult of We is very much a cautionary tale, one that explores how human minds are vulnerable to delusion. We can be convinced of things that aren’t true if the dream is appealing and delivered by a charismatic leader.

“That’s one of the lessons you can take away from WeWork’s cautionary tale: Think smaller.”

Adam Neumann raised over $10 billion this way, turning WeWork into the country’s most valuable startup with his vision. The problem is that in the end, the vision needs to be realized. He sold the idea to investors that WeWork was a tech company, implying that it was going to be extraordinarily profitable. And the reason that investors gave him so much money was because tech companies can be magical businesses. Once they make a piece of software—say, Microsoft Word—then they can just sell it at very little additional cost for every new user, and pocket profit every time somebody else buys the product.

WeWork, though, wasn’t a tech company—it was a real estate company. And that meant that every time they added a new user, they needed to build a new desk; they needed to renovate a building. That’s an extremely expensive endeavor.

The underlying reality was that WeWork required enormous costs to grow and operate, causing the company to lose more and more money as it went on.

4. You can do well without being enormous.

The story of WeWork is a tale of overreach. The company didn’t want to be a small office leasing company. It tried to be the biggest real estate company on the planet—to expand not just in New York, but throughout the U.S. and, eventually, the entire world. And that’s not all—WeWork wanted to dominate the education industry, so it started its own elementary school. It bought a company that makes wave pools for people who want to surf far from the ocean.

All of this led to enormous losses. By 2019, when everything imploded, WeWork was losing billions of dollars.

But if you look back in time to when WeWork was tiny, you find the company actually turned a profit. That’s one of the lessons you can take away from WeWork’s cautionary tale: Think smaller. Their product was cool and hip, and it struck a chord in New York in the early 2010s. If they’d thought smaller, stayed in New York, and grown modestly, they could have made a profitable business—one that stayed true to the values its founders espoused. Instead, it became so big that it crumbled under its own weight.

Then, when WeWork tried to list publicly in late 2019, he was ridiculed for running the company like a king, and his greed became his undoing.

It didn’t have to end that way. Midway through WeWork’s rise, he tried to engineer a plan where he would get more control of the company and take it away from new investors. An early adviser sat him down and warned: “Absolute power corrupts absolutely.” Adam ignored him—and, in the end, he paid the price.

To listen to the audio version read by Eliot Brown and Maureen Farrell, download the Next Big Idea App today: