The Culture Code: The Secrets of Highly Successful Groups 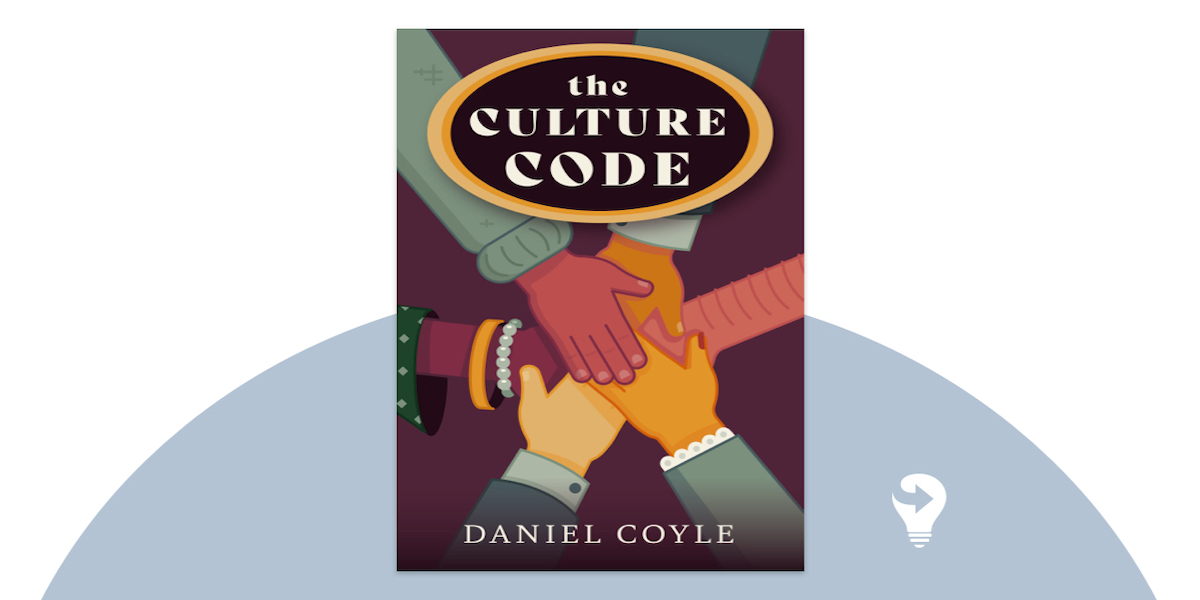 What do the best teams in sports, culture, and business have in common? Talent is certainly part of it, and that was the subject of Daniel Coyle’s 2008 bestseller, The Talent Code. But Coyle realized that individual ability was only part of the story—and that to truly excel, groups need to have a culture that fosters success. In his 2019 follow-up, The Culture Code: The Secrets of Highly Successful Groups, Coyle goes inside some of the world’s most high-performing organizations—like Pixar Animation, the Navy SEALs, and Google—to try to figure out the recipe for a creating a successful, collaborative, and productive culture.

Read on for five key insights from The Culture Code. To listen to the audio version of this Book Bite, download the Next Big Idea App today.

1. Successful groups come in all shapes and sizes.

The Culture Code’s entire thesis can be explained with 20 dried spaghetti strands, a yard each of Scotch tape and string, and one marshmallow. Those are the components of “The Spaghetti Challenge,” an activity designed to test groups’ ability to build the tallest-possible freestanding structure out of that odd conglomeration of ingredients.

Peter Skillman, a designer and engineer, ran an experiment in which he assembled numerous teams of four people to build these spaghetti-marshmallow structures. The hands-down winners, time and time again? Kindergartners. Groups of kindergartners beat out countless teams of adults, including ones made up of CEOs, lawyers, and business school students.

“Overly concerned with who’s in charge and how to respectfully critique each other’s ideas, the MBA students were hindered from getting to work.”

Business school students, in particular, tended to fare terribly. Groups of MBA students consistently appeared to be doing a great job: They’d examine their materials, they’d talk strategy, they’d respectfully and politely work through ideas. But when it came down to it, they were wasting far too much time sussing out group dynamics in a process psychologists call status management. Overly concerned with who’s in charge and how to respectfully critique each other’s ideas, the MBA students were hindered from getting to work.

Kindergartners, on the other hand, have none of these concerns. They immediately jump into the task, heads together, working side-by-side and speaking in short, hard-to-follow bursts. Observing them, you’d probably just see chaos, but the final product speaks for itself: The kindergartners wipe the floor with the grown-ups.

Neither Skillman nor Coyle claim that kindergartners are smarter than CEOs, attorneys, or MBAs—clearly, they’re not (not yet, anyway). But somehow, when they work together, they punch well above their weight. In essence, this is the story of The Culture Code: Some groups work so well together that they can perform far beyond what seems possible on the individual level. The Culture Code is concerned with uncovering why that is.

During his observations of, conversations with, and research into members of successful groups, Daniel Coyle began to notice a pattern. Members of these organizations didn’t call themselves a group, a company, or even a team; they consistently used the word “family.” The sense of belonging and closeness in these groups runs deep—so deep that the members consider each other kin.

“The sense of belonging and closeness in these groups runs deep—so deep that the members consider each other kin.”

The Culture Code posits that this intense closeness hinges not on hours spent in the office, nor on team-building retreats, nor on an open floorplan office, but on a strong feeling of safety. According to Coyle, human connection fosters safety, which in turn fosters even stronger connections, giving way to the intensely close, highly successful teams with which The Culture Code is concerned. But why is safety so important?

The MIT Human Dynamics Lab may have unearthed the answer to this big question. Their analyses of highly effective groups have revealed an abundance of what they call “belonging cues,” subtle behaviors that put group members at ease and create a sense of collective safety.

These cues include things like proximity, eye contact, mimicry, vocal pitch, and turn-taking. These cues also possess three key qualities. The first is energy: People displaying these behaviors are genuinely invested in what’s happening. The second, individualization: These cues indicate that the members of the group value each other as unique individuals. Finally, there’s future orientation: These behaviors demonstrate that group members expect their relationships with on another to persist into the future.

All in all, these belonging cues tell group members that they’re in a safe place—a place where they can feel free to speak up, make mistakes, give honest feedback, and share their crazy ideas, all without negative repercussions. That’s step one of how the world’s most tight-knit groups become the world’s most successful.

“Belonging cues tell group members that they’re in a safe place—a place where they can feel free to speak up, make mistakes, give honest feedback, and share their crazy ideas, all without negative repercussions.”

According to Dr. Jeff Polzer, a Harvard professor who’s spent a large portion of his career studying how small social exchanges can have outsized impacts on group dynamics, vulnerability is the most fundamental ingredient in building cooperation and trust. Dr. Polzer describes the process of sharing vulnerability as a loop, with the following steps: Person A signals vulnerability, person B signals their own vulnerability in return, and closeness and trust both increase as a result.

Coyle observes that high-functioning teams tend to intentionally engage in vulnerability-increasing exercises, and often uncomfortable ones. Take the Navy SEALs, for example: One of the most notorious Navy SEAL exercises is a particularly sadistic drill called Log PT. Log PT involves small teams of SEALs performing a series of exercise moves—while collectively holding a 200-pound log.

Even within the highly competitive world of Navy SEALs, Log PT is considered the worst, most difficult, and most painful training exercise. So immediately, Log PT creates a state of intense vulnerability: These trainees are nervous—they can’t do this alone—and they’re going to need each other’s help.

Log PT demands that the SEAL trainees are in tune with one another’s strengths and weaknesses, since they have to make countless tiny maneuvers to ensure the success of the group as a whole. If one group member starts to slip, the others have to immediately notice and shift slightly to carry the extra weight.

“Person A signals vulnerability, person B signals their own vulnerability in return, and closeness and trust both increase as a result.”

When Log PT is done well, the SEAL trainees are in near-silent communication, smoothly and elegantly moving through the prescribed exercises. When it’s done poorly—when the group members aren’t sufficiently in sync—the log bucks, rolls, and threatens to fall.

The drill closely mimics the high level of teamwork and trust that Navy SEALs have to exhibit in combat to execute the incredibly dangerous, complex missions for which they’re known. Intentionally building vulnerability, trust, and interconnectedness with planned exercises ensures that SEALs will have the bonds they’ll need to perform successfully when training gives way to real life.

Successful teams practice, practice, and practice again, breaking down each component of what they’re doing to make it better and stronger. While repetitive practice may not seem closely linked to safety, vulnerability, and interconnectedness, Coyle makes the argument that these four elements are actually tightly linked. When team members know they can trust their leaders and their teammates, they don’t shut down in the face of criticism, roadblocks, or rote repetition.

It’s in this step that the power of the group really becomes clear: With safety and vulnerability in place, and with practice under their belts, teams can operate at levels that even their coaches or bosses couldn’t predict.

“With safety and vulnerability in place, and with practice under their belts, teams can operate at levels that even their coaches or bosses couldn’t predict.”

Navy SEAL commanders rarely give commands during actual missions, trusting that their teams will make the right decision in the moment. In the same vein, coaches for the San Antonio Spurs sometimes call a time out… and then leave the team to huddle on their own, confident that the players themselves know better than anyone else what their next move should be.

So-called “BrainTrust meetings” at the animation studio Pixar are another great example of the importance of frequent, uncomfortable practice. A BrainTrust meeting is held at the beginning, middle, and end of a film project, and during the meeting the company’s leadership watches the work-in-progress and then critiques it mercilessly, without offering any suggestions for improving.

Why no suggestions? Because Pixar believes the core team working on a project will be able to come up with an amazing solution on their own. The outside leaders are just there to poke holes, not to plug them up. Exercises like this allow teams to access the brainpower of the entire group while maintaining the core team’s autonomy over a project. According to Coyle, that’s critical to creating highly successful teams: With all the key elements in place, they just need to be allowed to perform as a unit.

Once safety, vulnerability, and practice are in place, the final ingredient of any great team is a collective vision. Often, this vision is shockingly simple. One great example is Union Square Hospitality Group, the restaurant business founded by Danny Meyer. Worth over a billion dollars, Meyer’s restaurants are known for a level of exceptional food, service, and atmosphere that few competitors touch, and never at the scale Meyer has achieved.

“A straightforward but meaningful ethos not only informs group action, but also offers group motivation and cohesion.”

Meyer invests heavily in hiring and training, but he credits much of his success to his group’s simple motto: “We take care of people.” Researchers who studied the business found that this uncomplicated mission statement led to countless complex, intricate behaviors that benefit customers.

Another great example is pharmaceutical giant Johnson & Johnson, whose handling of the infamous 1982 Tylenol poisonings is considered history’s leading example of corporate crisis management. In the fall of that year, someone laced Extra-Strength Tylenol capsules with cyanide, leading to the deaths of seven people in the Chicago area. At the time, the FBI and FDA advised Johnson & Johnson to recall Tylenol bottles in and around Chicago.

But the company’s then-president James Burke went much further, issuing a national recall which cost the company an estimated one hundred million dollars and speaking openly to the media about his grief and the company’s new safety measures. As a result, Tylenol and Johnson & Johnson made a comeback no one could have predicted. Today, Tylenol is still one of the most trusted name brands in the world.

According to Burke, what guided his decisions during that crisis was Johnson & Johnson’s 311-word mission statement. The statement begins with, “We believe our first responsibility is to the patients, doctors and nurses, to mothers and fathers and all others who use our products and services.” That simple but powerful guiding statement told Burke all he needed to know as he made the decisions that defined his career.

According to Coyle, a straightforward but meaningful ethos not only informs group action, but also offers group motivation and cohesion, building a more successful team in every way.