How to Eat Just Half a Donut 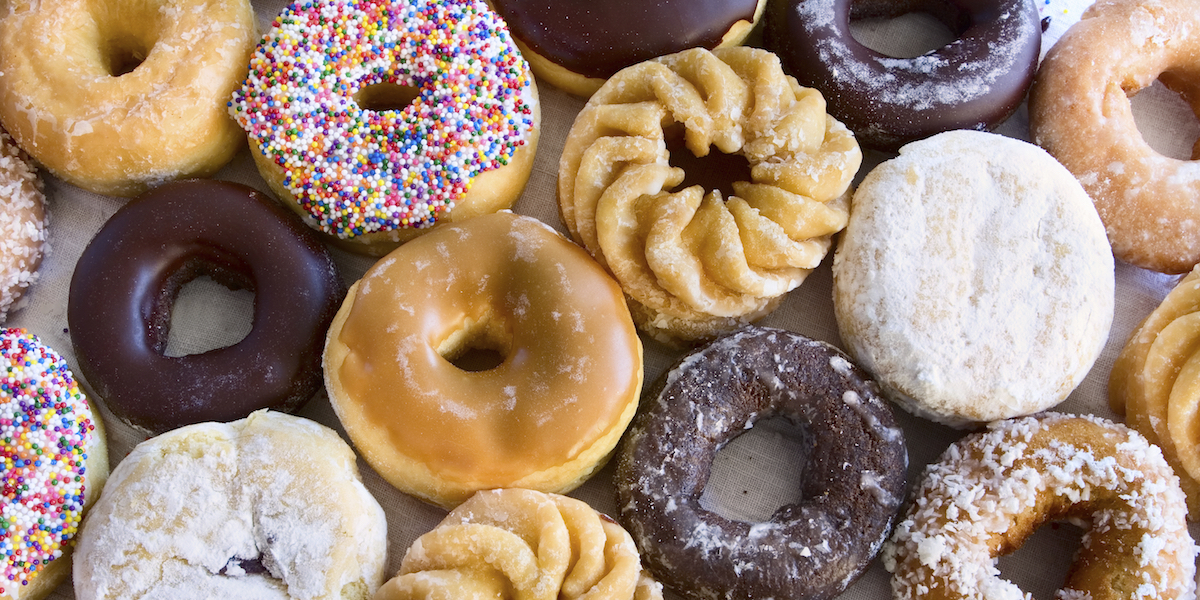 Donuts are tasty, and foodists eat things that are tasty. I, therefore, eat donuts.

Although I’ve explained extensively what it means to be a foodist, people are often surprised to learn that I really do eat donuts and other indulgent foods. And I eat them whenever I feel like it.

But I’m so thin, how is this possible? If I can eat something so good at any time, why am I not currently lying in a pile of donuts and stuffing my face with glee?

This is an important question, because one of the most common concerns I hear from readers is that they feel out of control around snacks and other indulgent foods, and don’t know how to reign in their habit of overeating.

If you often feel helpless and out of control around certain foods and wish you could change your behavior but don’t know how, put away your phone and close your email. This one will require your full attention.

The first thing it’s important to realize is that the assumption you’re making is that more control over your impulses is what’s necessary for you to stop overindulging and finally get healthy. In other words, you believe you need more willpower to succeed.

Of course, this isn’t true. Willpower isn’t the answer. In fact, if you’re afraid to stop dieting because you’re afraid of losing control, it will be almost impossible for you to embrace real food and form the habits necessary to get healthy forever.

But if it isn’t willpower that’s holding me back from a donut free-for-all, then what is it? What is keeping my behavior in check?

To understand the mental process that keeps me from gorging on donuts 24/7 it’s essential to realize that liking a food is only one of several factors that go into my food choices.

I like donuts, but I also really like my cauliflower that tastes like french fries and hundreds of other delicious foods, both healthy and not. I don’t stuff myself with any of them, because taste is not the only thing that matters about the foods I eat. I also consider my mood, how I’ll feel after eating it, what else I’ve eaten that day/week, and what my goals are.

In a dieter’s mind taste is pitted against goals, and an epic battle ensues for the rest of eternity. For a foodist like me, these are two of the least important factors in deciding what to eat.

Not because they aren’t important, but because I’ve already accounted for both in my healthstyle.

I eat amazing food daily. I’ve worked hard to assemble an arsenal of Home Court Recipes that are delicious and healthy. These are easily as appealing to me (taste-wise) as donuts.

In fact, the foods I buy from the farmers market and cook at home, as well as those I find in Real Food-centric restaurants here in SF, are so delicious that most donuts can’t compare. Thanks to experience stretching I’m not even interested in donuts unless they’re truly spectacular, like the ones I’ve had at Blue Star donuts in Portland, OR*.

For me, delicious food is a given. So when I encounter yet another tasty food, it has less pull over me. Especially if I know it will make me feel like crap.

Even when I find a truly spectacular donut it doesn’t take much willpower to stop myself from overdoing it. I know from experience how much flour and sugar my body can tolerate before feeling sick.

Large servings of breads or sweets make me feel foggy and lethargic. My fingers swell up, my stomach expands, and I feel like there isn’t enough water on earth to rehydrate me. It’s a several hour commitment, and it sucks.

Why would I subject myself to multiple hours of discomfort when I get most of the pleasure from the first few bites anyway?

Besides, cauliflower has never treated me this way.

The end result is that since I stopped dieting and started allowing myself to eat donuts whenever I want, I rarely finish a whole one.

Yes, there’s still a small part of me that considers the extra calories and sugar and consciously tries to keep them in check (i.e. I still consider my goal of maintaining my current weight). But at this point for me, this is hardly a significant motivator.

If I’m reluctant to over-indulge on one kind of food it’s usually because I’d rather save those calories for something else that’s yummy, not because it’s “I shouldn’t.” I know my habits keep my weight and health in check without much effort, and I’ve made room for indulgences in my healthstyle.

It also helps to know that if I am eating something delicious but less healthy, I’m not “sinning” and that this won’t be the last donut I ever eat. If I want another one, I can have it later. It’s not a big deal.

In other words, limiting myself to half a donut hardly takes any willpower at all. And instead of feeling out of control, I feel like I have supreme control.

Back when I was a dieter I couldn’t have fathomed such “restraint,” and usually ate two or three donuts when my willpower finally broke down. Who could blame me when I believed it was the last time I was ever going to eat anything delicious for the rest of my life?

It’s okay to eat foods you love. In fact, you have to embrace and expand this feeling in order for this technique to work for you. I know it’s scary, but it’s the only way. And as you’ve probably noticed, trying to manifest more willpower to gain control over your eating doesn’t work.