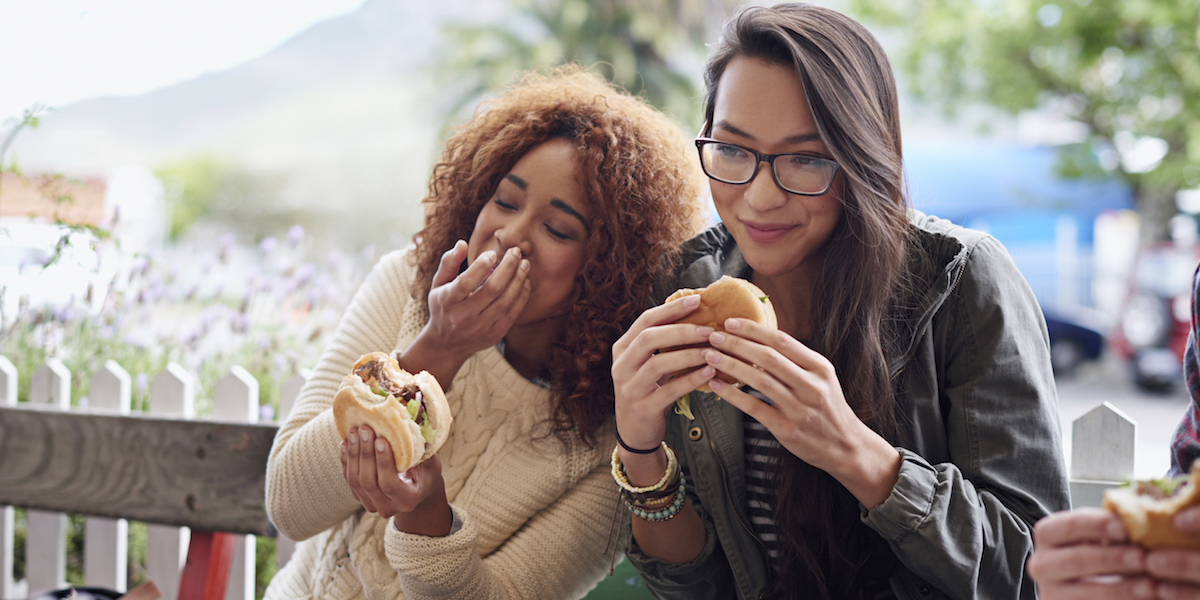 One of my favorite things to do as a kid was sit in bed with my parents and read books. On one particular afternoon I was getting ready to read with my mom, resting my back against the headboard with my knees bent to prop my book.

While waiting for her to join me, I noticed with curiosity that when my knees were together the rest of my legs didn’t touch at all. I thought that was biologically interesting and pointed it out to my mom.

“That gap better stay there,” she retorted unsympathetically.

I was shocked. I simultaneously felt chastised, judged and confused. I was only 8 years old, and obviously had never heard of “thigh gap.” It was also the first time in my life I felt self-conscious about my body.

I didn’t say a word, and we never discussed it again. But for the following days, weeks and years the message sank in: being thin was incredibly important and my mom would be disappointed if I let my appearance slip.

I’ve thought about this incident many times during my long, convoluted path to becoming a foodist. Mostly I’ve considered it with resentment.

I mean seriously, who says shit like that to an eight year old?

Even then I knew there was something wrong about what my mother said, but that didn’t stop me from pursuing this “ideal” into my twenties and beyond.

In retrospect this was a pivotal moment in my life.

There was certainly no lack of harm done. I suffered through years of body image issues and near constant feelings of failure. I endured countless awkward social interactions, especially around meals and bathing suits. At one time in college I told an entire classroom that I hated food.

It’s difficult not to be resentful of my mother for instilling such a damaging value system. On the other hand, I wouldn’t be me without having gone through this.

For one thing, I never became overweight or obese in an era when such outcomes are normal. My dedication to staying thin helped me cultivate strong self-discipline, which has served me well in many ways (e.g. getting through school, learning new skills, etc.). I also developed the basic habits of health, including regular exercise and paying close attention to my food choices.

Most important, without having suffered through 15 years of chronic dieting I would have never known how important it is to approach food and health as a foodist. I would never have worked so hard to get to the bottom of the food-health problem so many people struggle with. And I would never have started Summer Tomato or written Foodist, and helped thousands of others solve these same problems.

My mother’s unintentionally damaging comment is an example of what I call a transformative gift. A transformative gift is any circumstance or event that feels negative in the present moment, but ultimately reveals itself as a gift that benefits your life tremendously.

You can probably think of a few transformative gifts that have occurred in your life. Something that at the time seemed terrible––like a bad breakup or the loss of a job––that ended up being one of the best things that could have happened to you at the time.

What’s interesting about transformative gifts is that nothing changes about the incident itself as time moves on. What changes is your perspective. Something that at first feels like a verdict is shown to be an opportunity, and suddenly our feelings about it change.

What do transformative gifts have to do with your health?

If you’re struggling with getting healthy or losing weight, there’s a reasonable chance that there’s a transformative gift in your past that you haven’t uncovered yet. Maybe you still see it as something terrible, and have yet to see the benefit.

In my case I struggled for 15 years before what felt like a life sentence of permadiets was transformed not only into a better body and a better life, but a new career. I can think of a handful of other transformative gifts in various parts of my life that pushed me in a negative direction at first, but ultimately led me to a better place.

Identifying your own transformative gifts is important, because discovering the hidden benefit can be the deciding factor in changing your habits and behaviors.

When you experience something that stirs a strongly negative emotion, your natural tendency is to react defensively to protect yourself. This can manifest in several ways, most of which are not productive.

For example, as I internalized how important physical appearance was in my family it became a core value in shaping my identity. I didn’t want to be someone who was mocked and ridiculed (aka felt unloved) because of how I looked, so I went out of my way to make sure that didn’t happen. I viewed myself as someone who always wanted to be thin, therefore I was a dieter.

I could have had the opposite reaction, which would have been just as destructive. I could have rejected the value system of my mother, accepted her ridicule as a badge of honor, and doubled down on fast food and video games. I wouldn’t have had the same dieting issues, but I would have embraced a life of poor health.

It is completely natural to react strongly to an emotionally traumatic experience, but it doesn’t usually bode well for your long-term happiness.

Reframing the most impactful negative events in your life as gifts forces your mind out of unconscious, reaction mode and into thoughtful, conscious mode.

This is a very powerful thing.

When you are consciously thinking instead of unconsciously reacting you learn that you have a choice of how to respond. You have the option of stepping away from your limiting beliefs and assessing the actual pros and cons of different courses of action (or inaction).

I was 26 years old when I finally stopped dieting forever and realized I could help other people do the same. The previous decade and a half of weight struggles suddenly had meaning, and I was able to take a step back and accept the good parts of my mom’s philosophy and reject the destructive parts.

As an adult I’ve discovered that it doesn’t have to take 15 years to realize that something difficult is actually a gift. Getting married was particularly tough for me, as I’m a fiercely independent person and have trouble depending on other people (I get to thank my mom for this gift as well).

Fortunately by then I already knew that growth and happiness are the children of discomfort, and so I leaned into it. It took a few months (and a bit of therapy), but I came out the other side with a much stronger relationship and the deepest love I’ve ever experienced.

Like it or not, the toughest things in your life are what shape your character and are the best opportunities you have to create your own happiness and make life awesome.

The world is full of stories of people who have endured the worst catastrophes and come out prevailing, as well as people born with everything who end up miserable.

The difference is how they treat their transformative gifts.