Decoding Greatness: How the Best in the World Reverse Engineer Success 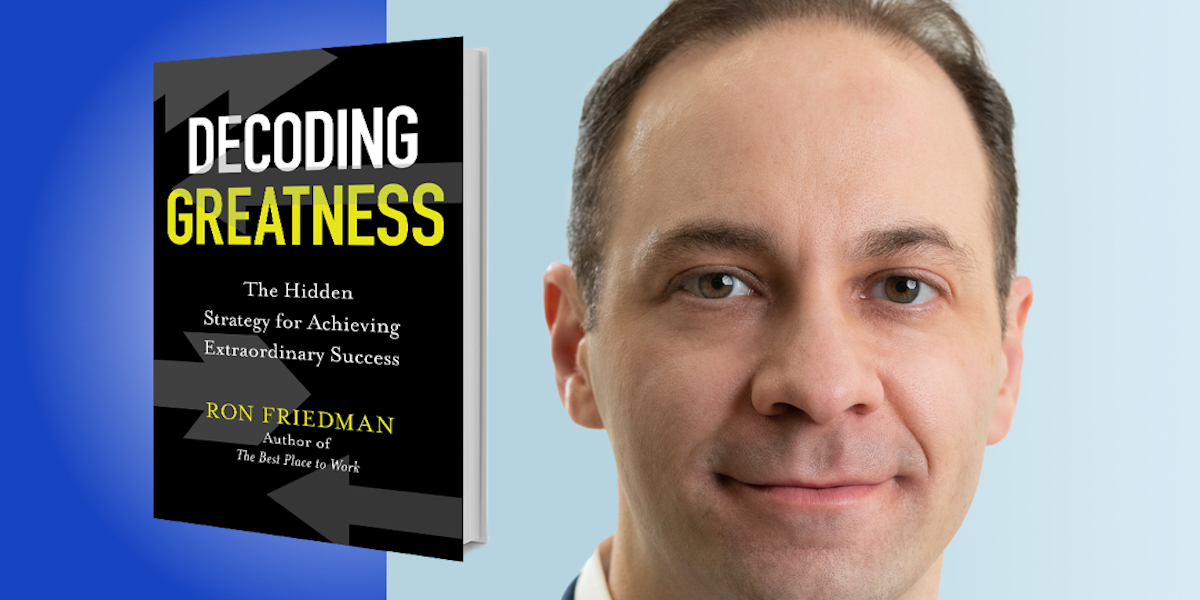 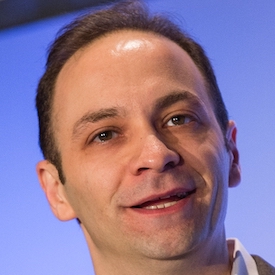 Ron Friedman is an award-winning psychologist who has served on the faculty of the several prestigious colleges in the United States and has consulted for political leaders, nonprofits, and many of the world’s most recognized brands. Popular accounts of his research have appeared in the New York Times, the Washington Post, Harvard Business Review, and more. Ron is also the founder of ignite80, which translates scientific and economic research into practical strategies that help working professionals become healthier, happier, and more productive.

Below, Ron shares 5 key insights from his new book, Decoding Greatness: How the Best in the World Reverse Engineer Success (available now from Amazon). Listen to the audio version—read by Ron himself—in the Next Big Idea App.

Most of us grew up with two basic stories about how top performers like Simone Biles, Jerry Seinfeld, and Steve Jobs achieve at the highest levels. The first story is that greatness comes from talent—from this perspective, we’re all born with certain innate strengths, and the key to achieving greatness is finding a field that allows those strengths to shine. The second story is that greatness comes from practice—according to this perspective, getting to the top requires the right practice regimen and an appetite for hard work.

But there’s also a third story, a path that an astonishing number of top performers have used for generations. And it involves mastering a skill called reverse engineering. Reverse engineering simply means studying the best in a field, and working backward to figure out how they did it.

“To know what we find impactful, we first need examples to study, so we can identify what they have in common.”

In Silicon Valley, there’s a long history of coders deconstructing winning products to learn how they’re made; it’s how we got the personal computer and laptops and the iPhone. But reverse engineering also explains how writers like Stephen King and Malcolm Gladwell learned their craft, how Claude Monet became a groundbreaking artist, and how Judd Apatow became one of the most successful comedy minds of our generation.

2. Before you can master, you must first collect.

If you’ve ever used Tinder, then you know that it will present you with potential partners and invite you to indicate whether you want to be paired with them by swiping left or right. The more you swipe, the better Tinder gets at predicting whom you’ll find attractive. It does this by looking closely at the partners you liked, and determining what they have in common. But without having a group of examples to look at, Tinder’s algorithm is fairly useless.

The same is true for all of us—to know what we find impactful, we first need examples to study, so we can identify what they have in common. And if you look at the biographies of creative luminaries, what you find is that a striking number of them collected works they admired long before entering and later dominating their field. Andy Warhol collected artwork; David Bowie collected records; Julia Child collected cookbooks; Quentin Tarantino spent so much time watching movies that his local video store hired him as its resident film expert to advise other customers. And before his passing, Ernest Hemingway’s library exceeded nine thousand books and was growing by nearly two hundred new titles per year.

Immersing yourself in examples leads to skill-building in ways that most people don’t anticipate. For one thing, it prompts you to absorb best practices without even trying; studies show that just consuming examples with an underlying structure leads you to detect their patterns, even when you’re not consciously trying to learn a thing. It’s a process called implicit learning.

“Consuming examples with an underlying structure leads you to detect their patterns, even when you’re not consciously trying to learn a thing.”

When we think of collections, we tend to think of physical objects, like artworks, wine, or stamps. But that definition is too limited—copywriters collect headlines, designers collect logos, and consultants collect presentation decks. So whatever your field, you can start a collection by taking photos and screenshots, bookmarking, or creating a directory of works you admire.

Once you’ve gathered all those great examples, the next step is to figure out what makes them compelling. There are a number of strategies you can use to analyze the works you’ve collected, and one is to play Spot the Difference. You might recall playing Spot the Difference as a kid, which involved looking at two similar pictures, side by side, and finding the discrepancies. That same approach applies to uncovering hidden patterns inside the examples we admire.

Suppose you’ve come across a website from a health guru you vaguely recognize. The landing page is fresh and charming and instantly draws you in. You’re about to register to receive a free giveaway when you pause for a moment. “I don’t usually sign up for newsletters like this,” you think to yourself. “Why exactly am I drawn to this one?” This is where the average website visitor shrugs and goes about their day. But by using Spot the Difference, you know to ask yourself: “What’s different about this example? What can I learn from this? And how can I apply this to my next project?”

Another method you can use to discover what makes exceptional works unique is to craft a reverse outline. Reverse outlining is traditional outlining’s sneakier, more provocative cousin. It doesn’t involve listing the important arguments you intend to include in the future. Rather, it entails working backward and outlining the major points contained within a completed piece. College students are taught to reverse outline as a means of reviewing the flow and logical consistency of their essays. It’s easier to evaluate the contributions of each paragraph when its main point is distilled down to a single sentence.

But there’s another use for reverse outlining, and it’s considerably more valuable for aspiring writers: using reverse outlining to uncover the hidden structure inside works by published authors. And you can use it on any text—from a viral blog post to a Facebook ad to an Academy Award-winning film. By compressing staggered events into a single document, we effectively collapse time, freeing us to broaden our perspective and see a piece anew.

As an example of this approach, when you first read Harry Potter, it’s easy to fall in love with the magical setting, endearing characters, and engrossing plot. It’s only later that it dawns on you: This isn’t the first time you’ve come across an orphan living with his aunt and uncle who is whisked away on an exciting adventure that involves discovering hidden abilities and fighting an evil villain. There’s another story just like it called Star Wars.

Reverse engineering can help uncover a proven formula, but copying that formula wholesale rarely works. In fact, it’s one of the most reliable ways of ensuring that your work isn’t taken seriously.

In 2005, a stay-at-home mother in Arizona published a novel about a high school student who falls in love with a vampire. It took the literary world by storm—the astronomical popularity of Twilight launched hundreds of vampire-based young-adult titles, few of which garnered even a fraction of the fanfare lavished upon Stephenie Meyer’s original series. The reason is simple: The more often a formula is used, the more predictable and less appealing it becomes.

“It’s in those moments of enjoying unique, uncommon experiences that you’re collecting the ammunition you need to fuel your creativity.”

Moreover, exceptional work depends on much more than a proven recipe; there’s also the matter of execution. Present two people with the same formula, and their results will likely differ. Why? Because they each possess distinct strengths, personalities, and biographical histories that contribute to their unique execution. Theoretically, anyone could copy the template for the world’s most popular TED Talk, the one delivered by Sir Ken Robinson. But what if, unlike Robinson, you’re not very good at telling jokes? What if your topic demands a somber tone, and humor is entirely inappropriate? The truth is, you need more than the right formula. You need the right formula for the right person within the right context.

That last factor, context, can be especially tricky. All those Twilight clones failed to catch on because readers’ expectations had shifted. The moment an audience is exposed to a particular experience, it evolves. No longer are fans riveted by a once-novel premise, charmed by formerly irresistible characters, or blindsided by what are now conventional plot twists. The audience has adapted, and the formula it found gripping just days earlier now feels insipid and stale. So what you need is a formula that complements your unique abilities and feels original at the same time.

So how do you find your unique twist? I’ll share one of six strategies here: blending influences. Many of the technological innovations we take for granted today, ones that have fundamentally transformed our world, are simply mash-ups of concepts harvested from different domains. Steve Jobs didn’t invent the MP3 player or the cell phone, but he led a team that found a way of combining the two, leading to the iPhone. Back in 1995, two Stanford University students took the way academics cite research articles and applied it to organizing information on the World Wide Web, resulting in Google.

What I love about this formula for evolving ideas is that it gives you the license to spend time consuming works in a wide variety of unrelated genres and fields, and not feel guilty about it. If you enjoy Japanese cinema or beat poetry or Middle Eastern architecture, there’s value in that. Because it’s in those moments of enjoying unique, uncommon experiences that you’re collecting the ammunition you need to fuel your creativity.

To listen to the audio version read by Ron Friedman, download the Next Big Idea App today: