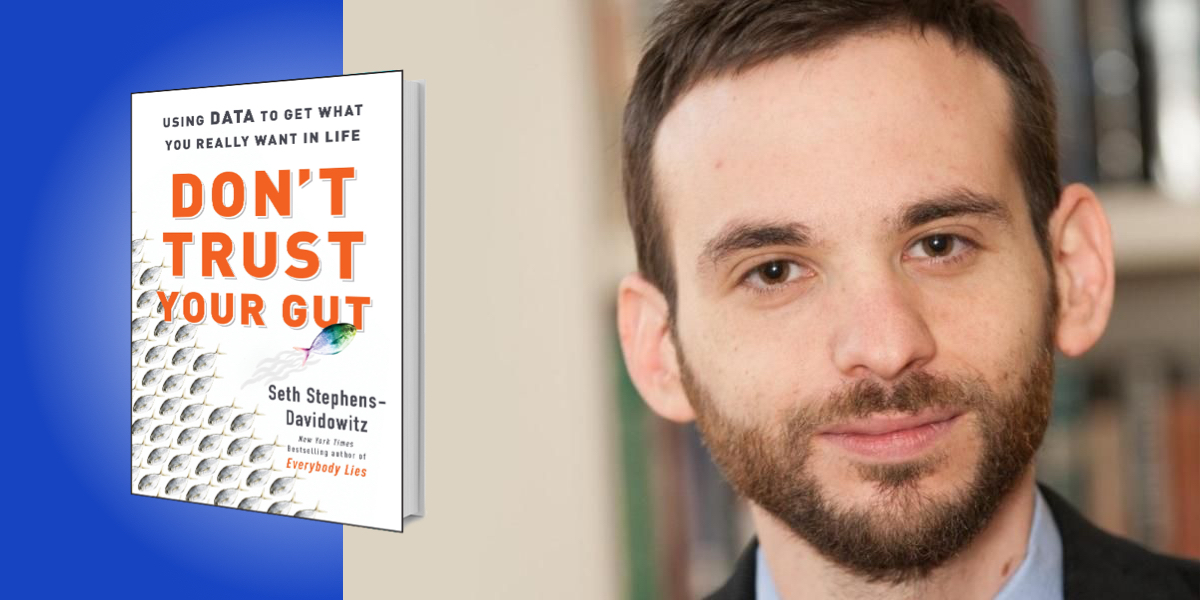 Seth Stephens-Davidowitz is an op-ed contributor for the New York Times and visiting lecturer at the Wharton School. He is formerly a Google data scientist, and he specializes in using big data to research topics in the realms of economics and philosophy.

Below, Seth shares 5 key insights from his new book, Don’t Trust Your Gut: Using Data to Get What You Really Want in Life. Listen to the audio version—read by Seth himself—in the Next Big Idea App.

1. Focus on psychological traits when dating.

Most people are dating all wrong—the data proves that we try dating people with traits that are unlikely to make us happy. For instance, people try dating someone beautiful. The conventional attractiveness of a mate is the top predictor (for both men and women) of how many messages someone can expect from online dating. For instance, people prefer tall men; some estimates show that each additional inch of height in males is worth about $40,000 of income on the dating market. There’s also the appeal of sexy occupations, such as being a lawyer, firefighter, or in the military. Others try to date people of certain races—disturbingly, there is large prejudice against African-American women and Asian males in dating. People are more likely to date someone who shares their religion, occupation, or went to the same college. They are even more likely to try to dating someone who shares their initials.

Some of this behavior is clearly silly and irrational, but what about other traits? Do lawyers or firefighters make for better mates? Are people happier with a beautiful or tall partner? The largest study of romantic relationships in history analyzed the happiness of 11,000 couples. They studied hundreds of variables and examined which correlated with how happy people were in their romantic lives. The researchers found that most variables had little to no predictive power. Occupation of a partner? Doesn’t matter. Race of a partner? Doesn’t matter. Conventional attractiveness? Doesn’t matter. Height? Nope.

The variables that do have predictive power are psychological traits, such as a partner being conscientious, happy, having a growth mindset, or a secure attachment style. So, based on data, pay less attention to the traits that are highly competed over in the dating market. Instead, focus on people who lack these overrated traits, and look harder at psychological traits. This leads to long-term happiness.

2. Think more about the adult role models you expose your kids to.

Parenting is scary—parents face thousands of difficult decisions, with little guidance. But the first thing data tells us is that parents can (mostly) relax. The best data suggests that many of the most-debated parenting questions don’t matter much. Breastfeeding? Doesn’t matter. Allow your kids to use modern technology? Doesn’t matter.

“Think hard about the adults you are exposing your kids to, because they are surprisingly likely to follow in those footsteps.”

That said, there is one parenting decision that matters a lot: where you raise your kids. Researchers have studied the long-term outcomes of families that moved when their kids were at different ages, and they found that certain neighborhoods lead to better outcomes. The biggest predictors of what makes a neighborhood great are the adults in that neighborhood. Growing up around adults that are responsible and successful lead to more successful kids. Little girls who grow up near adult female scientists are much more likely to become scientists themselves. Black boys who grow up near successful Black men—who are not even their own father—have much better life outcomes.

So based on data, parents can relax about most decisions, but should think hard about the adults you are exposing your kids to, because they are surprisingly likely to follow in those footsteps.

3. If you want to get rich, own a local monopoly.

I don’t recommend trying to get rich, because the studies say that money doesn’t lead to much happiness. But if you do want to get rich, we have more knowledge than ever about what it takes. A recent study of the entire universe of American taxpayers analyzed all of the members at the top 1 percent. Such individuals are making $1.58 million per year—quite a lot. The study concluded that the typical rich American is “the owner of a midsized regional business, such as an auto dealership or beverage distribution company.”

This shocked me. I didn’t think an auto dealership was a classic path to wealth, nor did I know what a beverage distribution company was. What we can make of this, first off, is that rich people own. Among the richest Americans, the ratio of owners to wage-earners is about 3:1. Salaries don’t make people rich—equity does. Second, rich business owners have to escape ruthless price competition. Auto dealerships, for example, have legal protections that allow them to service a local market and car company. Now, if you try to buy someone’s auto dealership, they may not want to sell it because they are so profitable.

However, there are some other businesses that allow people to escape price competition, one of the best being market research. You can learn a great deal about a niche topic, and then sell your insights widely to your contacts in that field; it will be hard for someone else to compete. The data suggests a surprisingly large number of people are getting rich doing this.

“I don’t recommend trying to get rich, because the studies say that money doesn’t lead to much happiness.”

Data suggests that success depends less on getting lucky and more on using your luck well. One way to hack luck in your favor is to increase your luck surface area. For instance, travel widely to let luck find you. Studies of painters have found that the biggest predictor of painters’ success is presenting to a wide range of galleries, because this allows them to stumble on a big break. Painters who don’t succeed tend to present their work at the same place over and over again.

Another way to hack luck is to put more work out in the world. Studies of artists have found that one of the biggest predictors of success is releasing more work. More quantity allows more chances for the world to give you a lucky break.

To get luckier, be willing to get rejected more. You may wonder how some people date out of their proverbial league. Frequently, these people just asked more people out and were rejected more often. Eventually, they got lucky. The more shots you take, the more chances you get.

5. Do the obvious things that bring happiness.

The best studies on happiness are experience-sampling projects. In these, people are pinged on their iPhones and are asked simple questions: who are you with? What are you doing? How happy are you? The largest of these happiness-studying apps, Mappiness, has created a dataset with 3 million points. Researchers have found, for example, that the same person, doing the same activity, at the same time, with the same people, is happier if they are in nature—particularly near a lake. They have found that people are happiest hiking, attending shows, or having sex. Also, people are happiest with romantic partners or friends, but not particularly happy with work colleagues.

I described these studies to my friends, and every one of them told me the same thing: “did we need scientists to tell us this?” The findings may be obvious, but there is profundity in their obviousness. How many of us don’t do these obvious things that make people happy? We work too hard, at jobs we don’t like, with people we don’t like. We whittle away hours on social media, which studies suggest makes people miserable. We spend little time in nature.

So the secret to happiness is keeping in mind how simple the things that bring happiness are—and not getting tricked by the noise of modern life. The data-driven answer to life is to be with your love, on an 80-degree and sunny day, overlooking a beautiful body of water, having sex.

To listen to the audio version read by author Seth Stephens-Davidowitz, download the Next Big Idea App today: