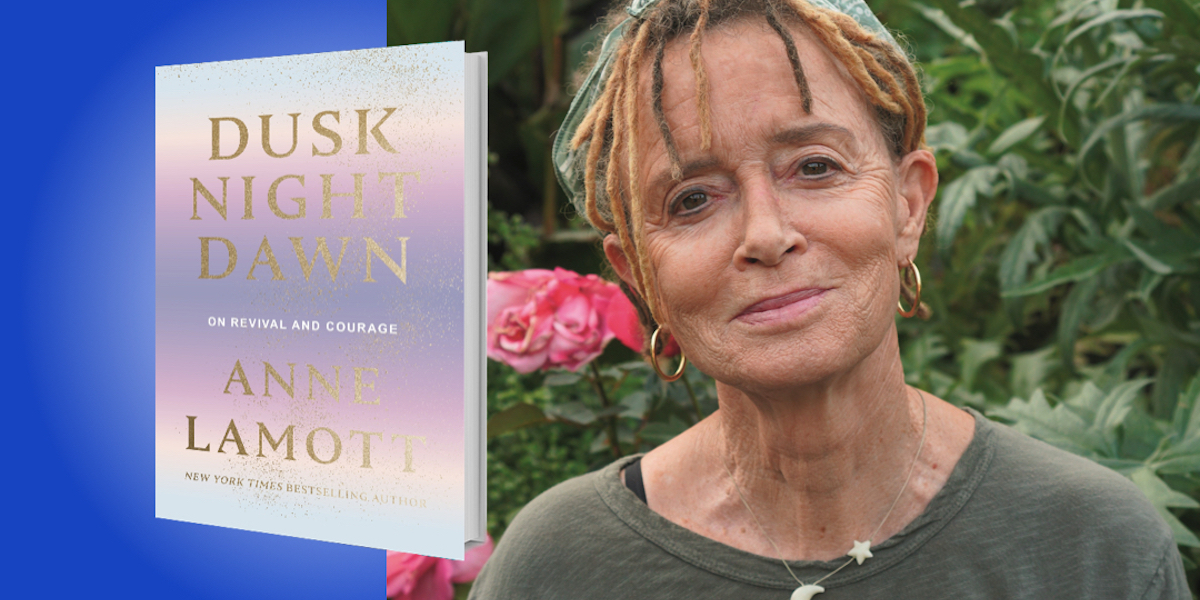 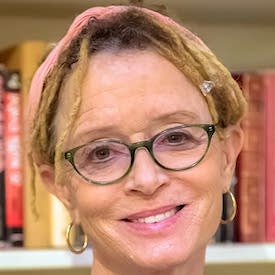 Anne Lamott is the author of New York Times bestsellers Almost Everything; Hallelujah Anyway; Small Victories; Stitches; Help, Thanks, Wow; Some Assembly Required; Grace (Eventually); Plan B; and Traveling Mercies, as well as several novels. A past recipient of a Guggenheim Fellowship and an inductee to the California Hall of Fame, she lives in Northern California.

Below, Anne shares 5 key insights from her new book, Dusk, Night, Dawn: On Revival and Courage (available now from Amazon). Listen to the audio version—read by Anne herself—in the Next Big Idea App.

1. We start where our butts are.

To restore our confidence and our faith in life, both nationally and around the dining room table, we start where our butts are. And we breathe—when we remember to breathe, we are connected umbilically to everything beautiful and true. There’s a quote from the great novelist E.L. Doctorow that’s about writing, but it applies to everything you may ever try to do: “Writing is like driving at night with the headlights on. You can only see a few feet in front of you, but you can make the whole journey that way.” In other words, you take the action, and the insight will follow. Whether it’s to begin a book, begin a new relationship, or begin turning climate change around, it’s all the same. It’s like what Mother Teresa said: “None of us can do great things, but all of us can do small things with great love.”

“Writing is like driving at night with the headlights on. You can only see a few feet in front of you, but you can make the whole journey that way.”

For example, if you don’t know how to save the poor in America, start by sending off whatever you can—fifty bucks, ten bucks, three bucks to the food pantries. During the pandemic, we all saw the three- and four-mile-long lines of people in their cars waiting to get one box of food for their kids. So send them some money, or fill a bag at Safeway with canned or powdered goods, and drive it to where all the service people live in your community.

It’s hard turning around. Climate change is going to be the challenge of our lifetime. But you know what? We’re good at hard. We stopped fascism a couple times now. We stopped smallpox. My son Sam was a father at nineteen and a meth head—and for him to turn his life around was devastatingly hard. But he has a tattoo on his forearm that says, “We never give up.” Both he and I use that as our family mantra, which we’re teaching his little boy, who’s now eleven.

When I was first sober, I was in Florida in an airport hotel, twenty stories up at midnight. And I was thinking about jumping off the balcony because I was so exhausted by staying sober. I was exhausted because there were twenty-plus bottles of alcohol in my little refrigerator, and it was so hard. Now, asking for help is not my strong suit—my strong suit is helping everybody else. I was raised to be the flight attendant in my family; I even had a little clipboard by the age of six so that I could help my parents get along better, and I could help my dad not drink as much and my mom not eat as much.

But on that night in Miami, I asked for help. I picked up that 200-pound phone, I called the hotline for newly sober addicts and alcoholics, and I said, “I need help.” They sent over a Texan woman, who came over in a pink Cadillac at midnight, and she taught me how to do the smallest possible things, like get myself a glass of water and turn back the sheets of my bed. I’ll also confess that we got out all the candy bars from the mini refrigerator; she’d had the front desk come up and take away all the bottles, so we ate chocolate instead. Together, we shared strength and hope, and I got through the night without drinking—and I woke up in a really wonderful mood.

“When you’re sitting with someone who feels stricken and full of self-loathing and grief, if you get them laughing, they are halfway home.”

3. Laughter will save us.

I was 35 years old by the time I discovered that a B+ was a good grade. As a child, if I brought home a B+, my parents would say, “How much harder would it have been to get an A-?” But if I brought home an A-, they would say, “Is there still time in the quarter to get an A?” So I learned that you’re probably never going to do well enough to feel the kind of achievement and perfection that your parents raised you to aim for.

Nine and a half years ago, my son dug around inside himself and found something that wanted to live and be a good parent. He was surrounded by clean and sober men in San Francisco, and one day at a time, they helped him not pick up a drink or a drug. And you know what they had to offer? They gave him the gift of laughing at his mistakes, at his past, at his crazy thoughts. And now he’s the one helping newcomers, brand new clean and sober alcoholics and addicts, begin to laugh at themselves—all we have to do is share that with someone else. I’ve always said that laughter is carbonated holiness. So when you’re sitting with someone who feels stricken and full of self-loathing and grief, if you get them laughing, they are halfway home. If we can just share and listen to one another and get our senses of humor back, we’re going to be okay.

4. Some of life’s most important lessons come during the “third third.”

I’m going to be 67 next month, and in the last third of your life, you learn about the grace of myopia, and not being able to see with such precision and judgment. To me, grace is spiritual WD-40; when you’re knotted up and you’re not getting anywhere, if you can summon the willingness to have life put that long, red straw into the nozzle of your being and give you a spritz, it sort of awakens you again. You get to start a new 24 hours whenever you want.

“Start thinking about the person who keeps everybody from knowing the real you, and ask yourself if you need to have him around all the time.”

In my third third, I realized that I was lugging around so much old stuff, mostly resentments—people I refused to forgive, including myself. And that was keeping me flying so low in my psychic airplane that I was just barely grazing the treetops on some days. By your late 50s, you’ve lost people of your own age, and you start to wonder, “How much longer do I have? And why am I lugging around all this stupid, heavy stuff?” And you start to let go of the resentments, and the lack of forgiveness—especially with a little help from others.

5. You are not your act, your persona, or your achievement.

So how do you connect with the real person inside you, besides your grades, your finances, your nice car, your whatever? You just… stop. You do what I call the “sacrament of ploppage”—you sit down, and you start to realize that everything electronic will usually work again if you just unplug it. And that includes you, too. So you get off the exercise wheel you’ve been on, and you start to think about the Russian nesting dolls of your being. See if you can unscrew the first one—that’s who you pretend to be in the big community. And then you think about your persona, the performance art of yourself, and maybe you can let that go from time to time.

My brilliant comedian friend Duncan Trussell says that when you first meet him, you’re meeting his bodyguard. So start thinking about the person who keeps everybody from knowing the real you, and ask yourself if you need to have him around all the time. And then you go one more nesting doll deeper, to who you were born to be, who you always were all along. And you remember something I tell my Sunday school kids: You are loved and chosen. This is a come-as-you-are party, and you are safe in the truth with us.

To listen to the audio version read by Anne Lamott, download the Next Big Idea App today: