Emotion by Design: Creative Leadership Lessons from a Life at Nike 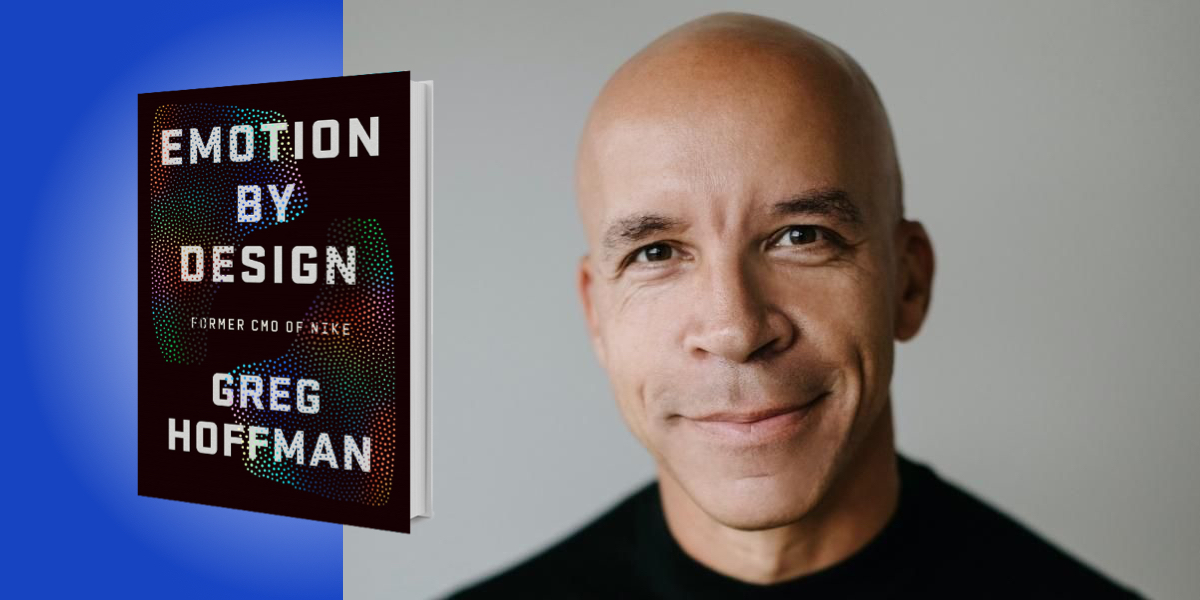 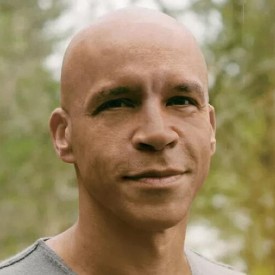 Greg Hoffman spent 27 years working at Nike, starting as a design intern and rising up to Chief Marketing Officer. His final role with the company was as Vice President of Global Brand Innovation. Now, Hoffman is the founder and principal of a brand advisory group, Modern Arena. He also teaches brand development at University of Oregon’s Lundquist College of Business.

Below, Greg shares 5 key insights from his new book, Emotion by Design: Creative Leadership Lessons from a Life at Nike. Listen to the audio version—read by Greg himself—in the Next Big Idea App. 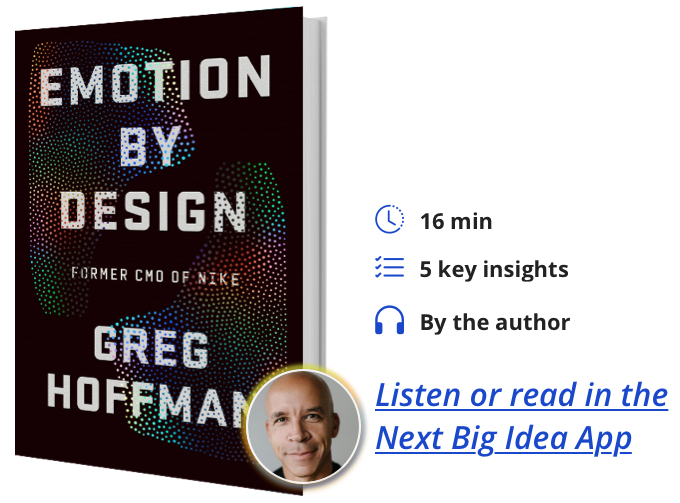 As Nike expanded into new markets, their culture of risk-taking grew with it. A lot of established brands start out bold and experimental, but once they reach a certain pinnacle, their mission shifts from attainment to protection. Risk-taking suddenly becomes, well, too risky.

At Nike, we created an entire campaign called “Risk Everything,” which launched during the World Cup of soccer in Brazil, 2014. The centerpiece of the campaign was an epic, five-minute, animated commercial called “The Last Game.” In it, a mad scientist stands on stage as if giving a TED Talk, the screen behind him flashes images of the greatest soccer players and he says, “Even the greatest players of our time make mistakes. They take too many risks! After all, they’re only…human.” After a pause, he adds, “But what if they weren’t?” From there the scene transforms into a mission for the world’s greatest footballers to use their creativity to save soccer from the hands of the villainous Scientist, and his army of Clones. He programmed his clones to remove all risk-taking from soccer and replace it with ruthless efficiency and flawless decision making. It was a risky film given that it had the longest running time of any commercial in our history, but ultimately it became part of the most viewed campaign in Nike’s history.

“History has shown that innovation breakthroughs are rarely created with caution.”

The story is a metaphor for what can happen when a brand, a leader, or a team isn’t incentivized to take the type of creative risks that lead to game-changing ideas. History has shown that innovation breakthroughs are rarely created with caution. The challenge, whether a brand is old or new, is how to establish a culture of creative risk-taking, then protect it from the natural forces that try to crush it. Does a team need to ask permission to use their imagination? Does an organization actively reward bold ideas that fall outside of the normal workload? If an unconventional idea doesn’t work, are the creators encouraged to try again? Brands that incentivize creative risk-taking within their organizations are brands that inspire their audiences.

A business culture that doesn’t play it safe, and instead plays to win, creates room to daydream and protects the time to do so. It’s a culture that makes space for the two essential questions of innovation: What if? And why not?

Leaving inspiration to chance, where it just hits you in a random moment, is not a recipe for sustained success in the creative world. You have to go out and find it. While some may be born with a seeker’s mentality, others can learn to be more curious. Curiosity is a muscle that needs training.

Knowing this allowed Nike to build a culture of creative curiosity. We allowed curiosity to take us way outside of ourselves, and our sector, in the pursuit of inspiration. We even looked all the way out into the world of space exploration—though this foray is not uncommon. Everything from memory foam and CAT scans to wireless headsets and the computer mouse were inspired by innovations for the final frontier. Nike’s own Nike Air technology was inspired by NASA-designed astronaut helmets. The blow molded rubber technique, used in the helmets, inspired Nike to create hollow shoe soles that could be filled with air, thus improving the sneaker’s shock absorption. The Nike Air innovation set off a revolution in running shoes and beyond.

Curiosity is rocket fuel for creativity. It reveals opportunities and motivates seizing those possibilities. Finding inspiration can be difficult, despite how infinite it is. Create a plan that allows it to flow naturally through you and into your work. Bring the outside world into yours through habits and rituals to empower yourself and your team to achieve greater creative results.

3. Dare to be remembered.

We are engaged in building a life for our brand, one story at a time. We want our stories to be thoughtful, funny, and revealing of something deeper within us and the world. These stories should connect with audiences in a way that compels them to feel something. In short, we want them to be stories that are remembered. To achieve this, you need to pull back the curtain of your brand to offer a clear view of its values and characteristics. If you allow your audience to see your personality, then they will respond to your humanity.

“Unlike a book, your brand’s story never ends.”

At Nike, we often used our storytelling as a way to open up the world of sports to new audiences and broaden the definition of athletic achievement to include everyone. That is the essence of Just Do It. In 2012, this insight and mission were brought to life through the Nike “Find Your Greatness” campaign that ran during the London Summer Olympics. Within the promotional film, it’s revealed that there are 29 towns in the world named London. While the greatest athletes in the world were competing at the Olympics in London, England, there were also athletes achieving greatness in Londons all over the world: from London, Jamaica, to London, India. Our message was that greatness is everywhere, for everyone. Greatness is in all of us.

Your brand is your story. It’s how you express your product, ideas, and services. Your story is comprised of multiple elements and subplots, tangents, and twists. Unlike a book, your brand’s story never ends. You are always telling it. And by expressing different human traits, your relatability becomes the ultimate invitation into your brand.

Each brand dreams about creating a product that becomes a cultural icon. Every brand wants its own Levi’s 501 or Ford Mustang. It is one of the highest points a product can reach, yet if that is the goal from the start, you will probably fail. Recognize, instead, that becoming “cool” means embracing authenticity, individuality, and a strong sense of self. There are cool trends, but you won’t create an icon by following a trend. You create an icon by starting a trend. If you chase one instead of innovate, then you’re probably trying to be something you’re not—and consumers expertly expose inauthenticity. Brands don’t decide what becomes an icon; consumers do.

The Nike Air Force 1 sneaker has had many editions over the years, but it fulfills the same purpose as the very first Air Force 1 shoe that took the Philadelphia 76ers Moses Malone to the NBA Championships in 1983—and led me to believe in my teen years that I could be a professional basketball player. Today, the Nike Air Force 1 is not only the biggest selling sneaker in the world, but it is also the most influential sneaker in culture. This shoe has that rare combination of accessibility and aspiration. Forty years later, it continues to stay true to itself and understands that its authenticity is its cultural currency.

More often than not, brands find it challenging to stay relevant and remain part of the cultural conversation. Too many latch on to what everyone else is doing, but the results are often inauthentic and lacking emotional power. By chasing cool, you won’t catch it. Cultural icons form when a brand is authentic to its identity and purpose. Do that, and cool will chase you.

We often find the most impactful insights when we expand our field of vision to see what was formerly out of sight. The essence of this is empathy: our willingness to listen to and understand those whose experiences differ from our own. Insights through empathy can lead to transformational change. When we go beyond simple observations and assumptions, we are able to tap into our creative energies in ways that might otherwise have remained hidden. As leaders, our role is to find those connective threads between what we sell and what the world needs. To use our talents and empathy to see the world that others experience.

“Indifference isn’t an option if we are to push society forward.”

At the start of the 2016 NFL season, Colin Kaepernick took a stand against racial injustice and police brutality by kneeling during the national anthem. A year later, he was without a football team to play for. As I sat next to him at a lunch meeting on the Nike Campus that summer, I was moved by both his unwavering commitment to the cause and our similar backgrounds. Like Colin, I am biracial and adopted by white parents. I looked through that lens, as the Nike Chief Marketing Officer, that day and in seeing Colin’s sacrifice felt the need to amplify his voice through stories that inspire action. A year later, to commemorate the 30th anniversary of Just Do It, we launched the “Dream Crazy” campaign, featuring Colin Kaepernick. The campaign celebrates athletes who “Dream Crazy,” emphasizing that dreams that ignite our spirits are worth sacrifice. The film was profound and inspiring to some, and polarizing to others. As we look back four years later, we know that what was considered crazy was only the beginning.

Indifference isn’t an option if we are to push society forward. With our insights, and through our stories—told in images, film, architecture, and products—we are closing the gap between disparities and an equitable future, thus ensuring that the ball bounces the same for all. When we tie this insight to our brand purpose, we create business growth, brand strength, and ignite conversations that lead to collective action and positive change. We leave a legacy, not just a memory.

To listen to the audio version read by author Greg Hoffman, download the Next Big Idea App today: