The Expectation Effect: How Your Mindset Can Change Your World 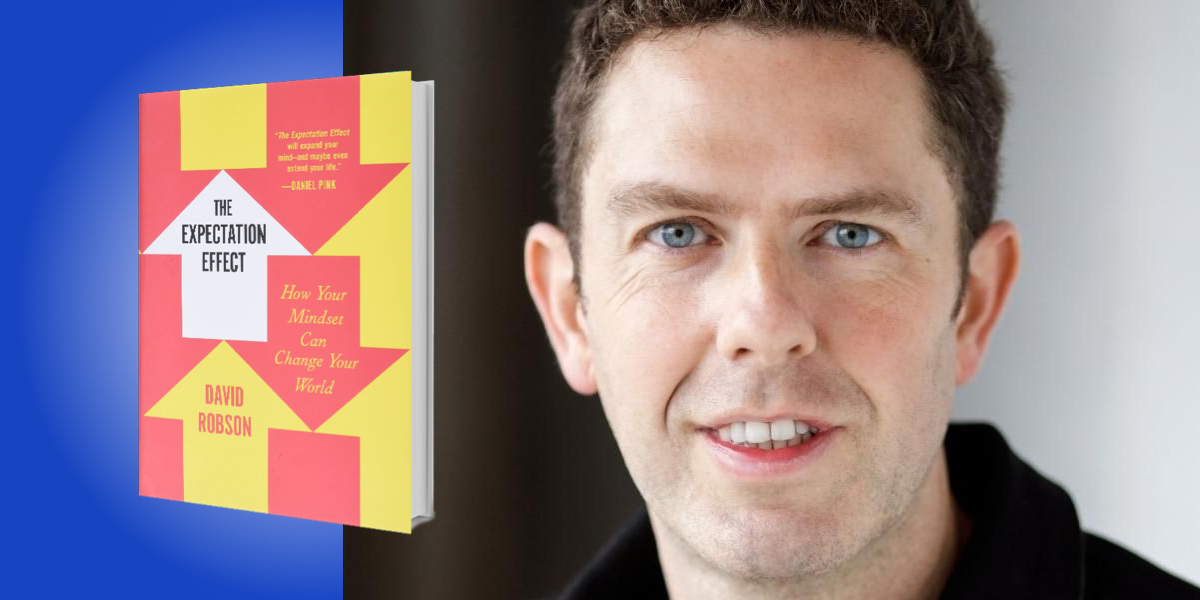 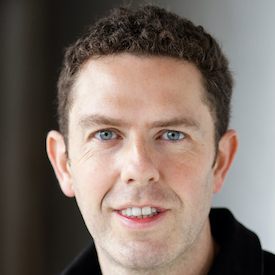 David Robson is a science writer, specializing in the extremes of the human brain. He has worked as an editor at New Scientist and BBC Future.

Below, David shares 5 key insights from his new book, The Expectation Effect: How Your Mindset Can Change Your World. Listen to the audio version—read by David himself—in the Next Big Idea App.

1. You don’t need to be deceived to benefit from placebos.

Our brains are “prediction machines,” constantly simulating the world around us and what may happen next. These predictions shape our sensory perception: in some ways, we really do see, hear, and feel what we believe. And they can also alter our physiology—including our hormonal balance, the workings of the heart and lungs, and the activity of the immune system—as we prepare to deal with life’s challenges.

Through this predictive processing, our underlying beliefs about ourselves and our situations can often create potent self-fulfilling prophecies. I call this phenomenon the “expectation effect.”

Perhaps the most famous expectation effect is the placebo response, in which positive beliefs about a treatment can relieve patients’ symptoms and accelerate recovery. As Thomas Jefferson noted in 1807: “One of the most successful physicians I have ever known has assured me that he used more bread pills, drops of colored water, and powders of hickory ashes, than of all other medicines put together.” Jefferson called this a “pious fraud.”

The benefits of placebos are not just subjective. The brain can release endogenous opioids when we believe that we are receiving an analgesic, resulting in real pain relief. In the past, however, doctors had assumed that some kind of deception was necessary for placebos to work, but recent research is turning this assumption on its head.

Patients with chronic back pain were first offered a presentation on the power of expectation to reduce their symptoms, before being given a jar of clearly labeled placebo pills, to be taken twice a day. Over a few days, their symptoms improved by 30 percent (the threshold for clinical significance). Even more amazingly, they still reported benefits five years later, compared to a group who had continued with the standard treatment. It seemed that the mere knowledge of the expectation effect had continued to help them manage their pain. Given these promising results, many doctors are seriously considering the use of “open-label placebos” as a potential means to stem opioid addiction.

2. Turn unpleasant experiences to your advantage.

We can’t simply ignore the feelings we get from unpleasant experiences, but we can reframe our interpretations of the sensations to create powerful expectation effects.

“The mere knowledge of the expectation effect had continued to help them manage their pain.”

Consider a study looking at a new treatment for peanut allergy, which involved daily exposure to increasing doses of the relevant protein. The idea was to train the body to deal with the protein without launching a full allergic response. Previously, participants had reported uncomfortable (but non-life-threatening) side effects that often resulted in their discontinuing treatment. In 2019, researchers from Stanford University started encouraging patients to reframe these symptoms as signs that their immune system was strengthening. This altered mindset not only reduced the children’s discomfort—it also boosted levels of a protective antibody that helps prevent serious allergic reactions if they accidentally ingest a peanut.

A very similar process can help us perform our best during a difficult exam or public speaking. Many of us assume that anxiety is inherently debilitating. This means that, when we experience a racing heart and sweating palms, we see the feelings as signs of imminent failure—which can, of course, generate even more anxiety. In reality, the stress response is adaptive. The racing heart pumps more oxygen and glucose to the brain, which helps us think better, and hormones like cortisol, at moderate levels, ensure that we remain alert and on the ball. Teaching people about these potential benefits of anxiety enhances their performance in the challenge they face. Even more importantly, it helps the body recover more quickly afterward, so that they are less likely to experience the lingering effects of stress.

Many of us have the intention to get fitter, while simultaneously nurturing the belief that we simply aren’t cut out for exercise. This assumption may be shaping our physiological responses to workouts so that we fail to enjoy the benefits of all that hard work.

Consider a study from Stanford University’s Mind and Body Lab. The participants were first given a genetic test that identified different versions of the gene CREB1. The gene is known to influence people’s aerobic capacity and body temperature during exercise. If you have the “high risk” version, you may find your workouts quite a bit harder. The test was genuine, but the researchers didn’t reveal the true results immediately. Instead, participants received random feedback, which created the belief that they were or were not “naturally” good at exercise.

The effects of these expectations were striking. Participants who had been told they have the “negative” version of the gene found a later workout to be more painful, and showed lower stamina than those who had been told they have the “good” gene. Indeed, when it came to measurements of the transfer of carbon dioxide and oxygen in their lungs, the expectations proved to be more influential than the gene itself in shaping physiological responses.

“The expectations proved to be more influential than the gene itself in shaping physiological responses.”

Other experiments have shown that people with positive beliefs about their fitness move their muscles more efficiently, and they are more likely to feel that pleasant lift in mood after the workout. The “runner’s high” seems to be a product of our expectations.

If we want to make the most of workouts, we need to build new mental habits by questioning negative assumptions of what we can achieve. We can do this by recognizing that everyone has the potential to improve their fitness. We can then actively test our pessimistic beliefs, gently pushing ourselves out of our comfort zone and celebrating small successes. We can learn to reframe the usual aches and pains of exercise as a sign of progress.

4. Worry about sleep loss is fueling the insomnia epidemic.

According to the Centers for Disease Control, around 8 percent of the population reports such serious insomnia that they regularly take sleeping pills—roughly 17 million people. Yet multiple studies show that our estimations of how much sleep we get, relative to what we need, are often highly inaccurate. Many people achieve the necessary seven to eight hours a night, but believe that they are constantly lacking. These “complaining good sleepers” are much more likely to suffer from poor concentration, fatigue, depression, and anxiety than another group: people who sleep less, but have a more positive opinion of their night’s rest—the so-called “non-complaining bad sleepers.” Even the physical effects of insomnia (such as high blood pressure) seem to be as much a consequence of expectations as actual time in bed. As one sleep scientist told me: “worry about sleep is a stronger pathogen than poor sleep.”

Analyses suggest that around 40 percent of the people who currently suffer from insomnia may be “complaining good sleepers.” Rather than relying on soporific drugs, they would benefit from cognitive behavioral therapy that helps them to reappraise their inaccurate beliefs.

5. Your beliefs about aging can determine how long you live.

It sounds astonishing, but multiple studies point to the same conclusion: your beliefs can influence how quickly you age. The first signs of this expectation effect came from the Ohio Longitudinal Study of Aging and Retirement, which examined more than 1,000 participants since 1975.

“People with more positive views of aging are about half as likely to develop Alzheimer’s.”

The participants’ average age at the start of the survey was 63 years old, and soon after joining, they were asked to give their views on aging. For example, they were asked to rate their agreement with the statement: “As you get older, you are less useful.” Remarkably, the researchers found that the average person with a more positive attitude lived on for 22.6 years after the study commenced, while the average person with poorer interpretations of aging survived for just 15 years (roughly a 7.5-year difference). That link remained even after the researchers had controlled for their actual health status at the start of the survey, as well as other risk factors, such as socioeconomic status or feelings of loneliness, which could influence longevity.

Later studies have shown that the effects of our age beliefs can start in midlife, and they are linked to our risks of numerous diseases. People with more positive views of aging are about half as likely to develop Alzheimer’s, for example.

How could this be? One pathway could be differences in behavior. If you associate age with frailty and disability, you may be less likely to exercise and take care of your body. But age beliefs will also have a direct effect on physiology through an increased stress response. If you feel vulnerable, small difficulties will start to seem more threatening. Over the long term, this could lead to chronically high levels of the hormone cortisol and bodily inflammation, both of which can raise the risk of ill health.

The consequences can even be seen within the nuclei of individual cells. Scientists have tracked patterns of gene expression that become more common as we get older (sometimes referred to as our “epigenetic clock”). For people who see old age as a potential for greater wisdom, improved decision-making, and personal growth, that clock seems to tick at a slower pace. For those who associate old age with vulnerability, it ticks much faster.

Our society is full of ageist stereotypes that reinforce the idea that aging is inevitably accompanied by decline. If you want to fight against it, you might look for positive role models who actively rejected these assumptions. I was lucky enough to interview Paddy Jones, the world’s oldest acrobatic salsa dancer, who only began dancing professionally in her sixties, and has now toured the world with her energetic routines. “I don’t plead my age because I don’t feel 80 or act it,” she has said.

To listen to the audio version read by author David Robson, download the Next Big Idea App today: