The Exquisite Machine: The New Science of the Heart 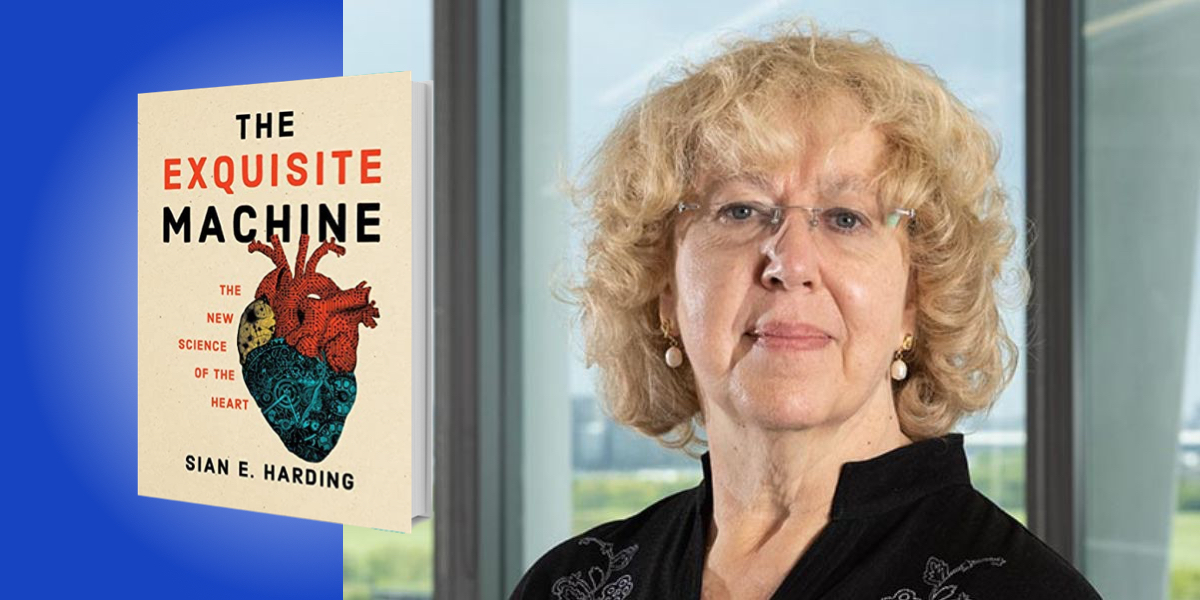 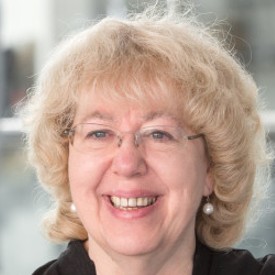 Sian E. Harding is professor of cardiac pharmacology at the National Heart and Lung Institute, Emeritus Professor at Imperial College London and the Director of the Imperial Cardiac Regenerative Medicine Centre in London.

Below, Sian shares 5 key insights from her new book, The Exquisite Machine: The New Science of the Heart. Listen to the audio version—read by Sian herself—in the Next Big Idea App. 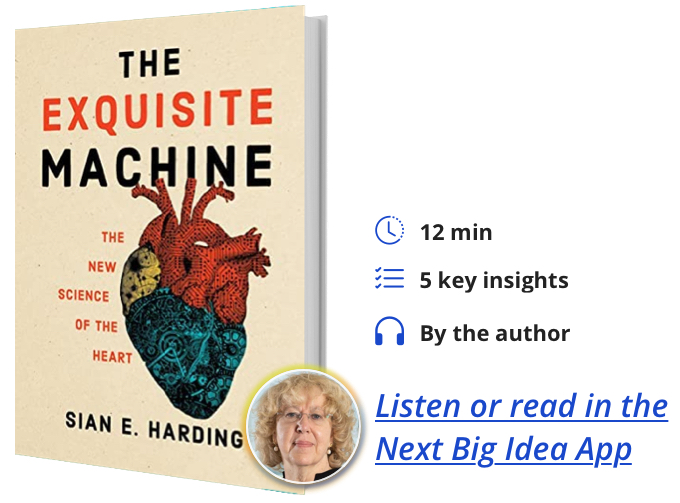 1. We only talk about the heart when it goes wrong.

The heart is an amazing feat of engineering. It’s resilient, reliable, and tough. Since heart disease is the biggest killer globally, this organ is frequently discussed in the context of disease. For many, however, it works perfectly for most of our lives. The number of stresses and insults endured by the heart is remarkable. Things like smoking, cholesterol, diabetes, and high blood pressure are well-known stressors, but newly-recognized stressors like chemotherapy drugs, pollution, and even social stress have recently come to light.

Your heart will beat 100,000 times a day for 80 years or more. Just losing even four minutes—240 beats together—can kill you. This is an amazing level of efficiency, equivalent to your washing machine performing 10 wash and spin cycles a day for 1,000 years. In fact, it’s the very perfection of the heart, honed by 500 million years of evolution, that makes it so hard to fix when it does go wrong, and nearly impossible to copy with our own engineering.

The search for an artificial heart began at the same time as the plans started for the first moonshot, more than 60 years ago. Since that time, we have successfully built rockets to the moon, Mars, and the outer solar system, but we still don’t have a complete off-the-shelf replacement heart. Not even the huge advances in electronics, stem cell biology, or genetically modified animal hearts have been enough to match the perfection of the human heart.

2. The heart cannot stop to mend itself.

We now know that half of the muscle cells which make up the heart are with you from birth to death. The heart mainly adapts by increasing or decreasing the size of each muscle cell, and the rate of cell replacement is very low. It took the carbon dating of hearts, a technique normally used to date fossils, to definitively show that there was any replacement at all. People who lived through the bomb test era, when there was a spike in radioactive carbon 14 in the atmosphere, had their cardiac muscle cells tested to show whether they had been created at the time of birth or after. Findings showed a cell turnover rate of just one percent a year or less. The heart has to make new cells at a very slow rate to preserve its structure.

“The heart mainly adapts by increasing or decreasing the size of each muscle cell, and the rate of cell replacement is very low.”

The cardiac muscle cells are packed with muscle fibers, which give them a strong structure for contracting and relaxing. When we look at individual cells, they look like tiny stripey bricks. To divide and make new cells, they have to break down this robust structure and split apart to allow new cells to grow and generate the fibers again. If too many cells are breaking down at once, the heart becomes unstable, and potentially fatal disturbances in its rhythm can occur.

Scientists tried to stimulate this cell division and replacement, using gene therapy to speed it up. When they tried this in pigs, it was very effective in repairing damage from a heart attack. Later though, the hearts began to show dangerous changes in rhythm as the number of dividing cells continued to increase. We are trying new technologies to adjust the rate of cell replacement, but it’s a fine line between repair of the heart and triggering a fatal arrhythmia.

In the time when evolution was having most of its effects on the heart, the major dangers to humans were severe injury from external threats such as predators and accidents. The body responds to low output from the heart, as you might get after a heart attack, as if it is experiencing a physical threat or blood loss after a hemorrhage. It activates the fight-or-flight response by increasing adrenaline, which increases the force and rate of the heart, to enable a quick escape.

The body also tries to retain water to preserve blood volume by shutting down the kidneys, as if reacting to a hemorrhage. These are emergency measures meant to last for only a few minutes or hours. They have an immediate benefit but are harmful if maintained. This is a balance favored by evolution, since it preserves your life in an emergency, so minor harm is worth the risk. However, when these hormonal changes are sustained over weeks or months, they really start to do damage.

“The body responds to low output from the heart, as you might get after a heart attack, as if it is experiencing a physical threat or blood loss after a hemorrhage.”

People can recover from the initial damage of the heart attack and seem fine. Weeks or months later though, a second wave of damage, caused by the body itself, drives the heart into failure. Heart failure is a disease where the body is flooded with water, causing extreme fatigue, breathlessness, and swelling of the ankles and legs. The increase in adrenaline produces damaging rhythm disturbances in the heart and brings further cell death through inflammation. Most of the drugs for heart failure are not designed to stimulate or repair the heart, but to block the body’s responses to its own hormones, to prevent ongoing damage.

4. The heart not only senses our emotions but can also drive them.

There is a kind of mini-brain within the heart tissue, a collection of nerves and synapses. While the heart can receive signals from the body, this heart tissue gives back information to the brain which can influence how we feel. The process of sensing signals from one’s internal organs is called interoception. Some people are better at this than others. If you sense that your heart is speeding up, then this amplifies the feeling of fear. It can tip into a vicious cycle where a racing heart triggers yet more anxiety, bringing on a full-blown panic attack. Remedies for panic attacks often center on reducing the heart rate, breathing slowly in and out deeply for example, because this breaks the cycle.

A very clever experiment showed that a change in sensitivity to fearful stimuli can even be seen within an individual heartbeat. Your blood pressure is highest as the heart expels blood and lowest as it relaxes to fill with blood again. That’s why it’s described with two numbers, for example, 120 over 80. This is the pressure measurement in millimeters of mercury.

Showing people a picture of frightened faces triggers a fear response. We are very social animals, so reacting when people around you are sensing some danger is evolutionarily a good thing. This also explains emotional contagion in crowds. If the subject of an experiment is shown these pictures at the height of the blood pressure, there is more of a fear reaction than at the low point. Even that very mild change in heart output is enough to sensitize you to an alarm. Beta-blockers, now a standard treatment for heart failure and hypertension, calm the heart rate and reduce high blood pressure. These drugs can help in anxiety syndromes, such as PTSD, and have even been reported to make some people completely fearless.

5. Extreme emotions can be as dangerous to the heart as severe physical stress.

We have all heard of cases where jogging or playing squash can cause a sudden disruption of heart rhythm, causing unconsciousness and even death. Football teams are routinely screened for cardiac defects which can make their hearts sensitive to these arrhythmias. Sudden death can be prevented only when the heart is shocked back into its normal rhythm with a defibrillator. We also now know that intense emotional stress can have exactly the same effect as physical stress, and both are triggered by massive floods of adrenaline. These adrenaline floods can be caused by things like violent arguments, experiencing an earthquake, or even something as simple as watching a thrilling sports event.

“Broken Heart Syndrome is most often observed in men, with an 80 to 90 percent male bias for sudden cardiac death.”

Can you die of a broken heart? It is possible. Bereavement is a very strong trigger, especially sudden bereavement. This has led to the catastrophic heart event being labeled Broken Heart Syndrome. Broken Heart Syndrome is most often observed in men, with an 80 to 90 percent male bias for sudden cardiac death. However, there is another disease which is also called broken heart syndrome or Takotsubo syndrome, which has an 80 to 90 percent bias for post-menopausal women. Takotsubo syndrome presents in women who have experienced the same intense, emotional triggers and are hospitalized with signs of a heart attack. When they are investigated, however, there is no blockage in the blood vessels. Instead, there is a paralysis of part of the heart, often the lower part, or apex.

There is no standard treatment for this syndrome, so hospitalized patients are simply supported as best as possible. About five percent die, but for many patients, their hearts recover in a few days or weeks, after which they are well enough to go home. These patients are thought to have different responses to adrenaline, responses that activate a protective pathway to head off the risk of arrhythmia.

A fascinating report documents a Brazilian married couple and their family watching a football penalty shootout for a cup final. Their favorite team lost, and a huge argument erupted among the family. The husband collapsed and was taken to the emergency room, where his heart was found to be in a dangerous rhythm. Defibrillation did not work and he sadly died. About an hour later, his wife was brought in with Takotsubo syndrome, from which she survived and recovered. This is a textbook example of the differences between these adrenaline syndromes and how they affect the heart.

To listen to the audio version read by author Sian E. Harding, download the Next Big Idea App today: