The Extended Mind: The Power of Thinking Outside the Brain 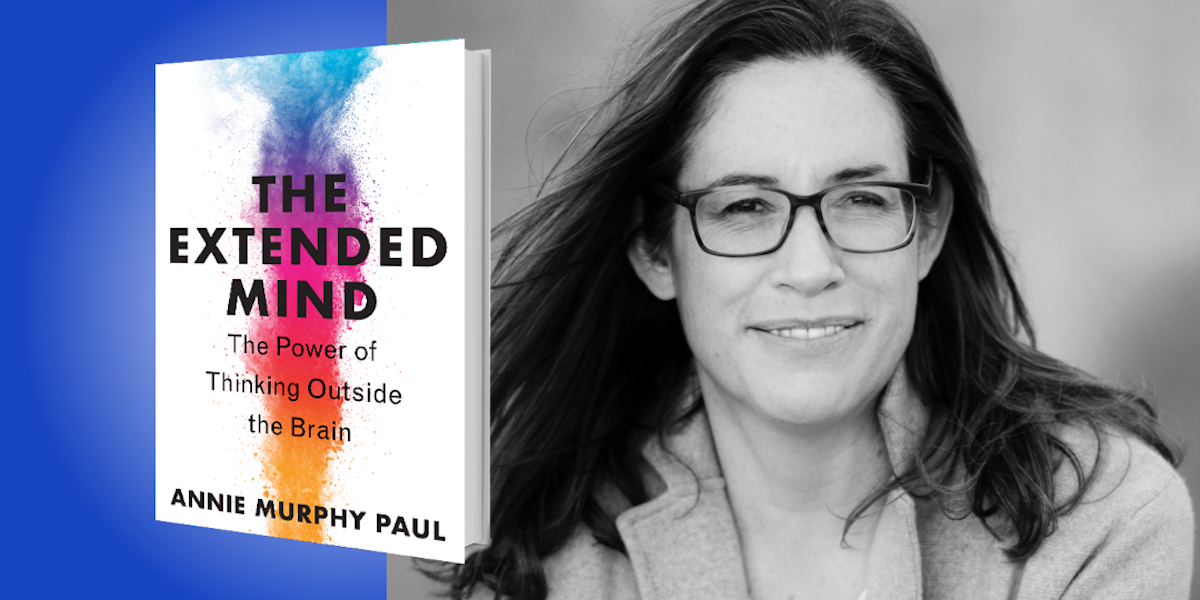 Annie Murphy Paul is an acclaimed science writer whose work has appeared in the New York Times, the Boston Globe, Scientific American, TIME magazine, and the Best American Science Writing. She is currently a fellow in New America’s Learning Sciences Exchange.

Below, Annie shares 5 key insights from her new book, The Extended Mind: The Power of Thinking Outside the Brain (available now from Amazon). Listen to the audio version—read by Annie herself—in the Next Big Idea App.

1. Thinking doesn’t happen only in the brain.

More than 20 years ago, two philosophers, Andy Clark and David Chalmers, wrote a journal article that opened with a question: “Where does the mind stop and the rest of the world begin?” Now, that question would seem to have an obvious answer, right? The mind stops at the head. It’s contained within the skull. But Clark and Chalmers maintained that this assumption—as common as it is—is wrong. The mind, they said, takes elements from outside the head and draws them into the thinking process. These mental “extensions” allow us to think in ways our brains couldn’t manage on their own. They called this phenomenon “the extended mind.”

2. We extend the mind with the body.

We in the West are used to thinking of the mind and the body as separate. But a burgeoning field called “embodied cognition” is demonstrating that thinking is actually a full-body experience. This is true in a few different ways.

“It’s common in our culture to compare the brain to a computer, but this is a deeply flawed analogy.”

First, the internal sensations of the body—our “gut feelings”—guide our perceptions and our reactions. When we learn to tune in to these inner signals, we can use them to make sounder decisions, and even to connect more effectively with other people.

Second, the movements our bodies make affect the way we think. We’ve come to believe that serious thinking entails sitting still, but research shows that moving—walking, exercising, acting things out—enhances our mental processes in ways that don’t happen when we’re sitting down.

Third, a specific kind of movement—the gestures we make with our hands—extend our thinking by capturing and expressing concepts that we can’t yet put into words. Research shows that our most advanced, most cutting-edge ideas often show up first in the motions of our hands—motions that we then use to inform and construct a verbal account of what we’re thinking.

3. We can also extend our minds with physical space.

It’s common in our culture to compare the brain to a computer, but this is a deeply flawed analogy. A laptop operates the same whether it is open on a desk in an office or on a bench in a park. But human brains aren’t like that—they are exquisitely sensitive to context. One of the most fertile and fruitful places to “think with” is nature. That’s because, over eons of evolution, our brains were tuned to the kind of sensory information available in the natural world. Spending time in a hard-edged, highly designed, built environment drains our mental resources, while spending time in nature actually replenishes them. We can also deliberately arrange the interior spaces we occupy in ways that extend our thinking. Research shows that it’s especially important that we feel a sense of control and ownership over the space in which we do our learning or working. It’s also important to incorporate into these spaces cues of identity—that is, objects or symbols of who you are, what you’re doing in that space—and also cues of belonging—objects or symbols that represent your membership in a group that’s meaningful to you.

“In order to think the intelligent, informed, original thoughts we’re capable of, we can’t rely on the brain alone. We have to think outside the brain.”

4. We can extend our minds with the social interactions we have with other people.

So often, we assume that real thinking—serious thinking—is done alone, bent over a book or a notepad. But in fact, humans think best when they are interacting with others. Social activities like debating, storytelling, and teaching activate mental processes that remain dormant when we’re by ourselves. In fact, when we structure our interactions with others in the right way, we can actually engage a kind of group mind—a collective entity that is more intelligent than any one of its members.

5. The “naked” brain, the un-extended brain, is not that powerful.

We hear a lot about how amazing the brain is, but the lesser-known scientific story from the past 20 years is how much researchers have learned about the brain’s limits. These limits are not a matter of individual differences in intelligence; they are common to all our brains. They’re a product of the brain’s status as a biological organ, one that evolved to do things that are very different from what we ask of it in our complex, knowledge-centric modern world.

Drawing on the resources of the extended mind allows the brain to “overachieve,” to do more than would be possible on its own. In fact, we can think of experts among us as those people who have mastered the art of thinking outside the brain. Research shows that top performers don’t do it all in their heads; they achieve their superior results by integrating internal and external resources.

To listen to the audio version read by Annie Murphy Paul, download the Next Big Idea App today: