Fantastic Numbers and Where to Find Them: A Cosmic Quest from Zero to Infinity 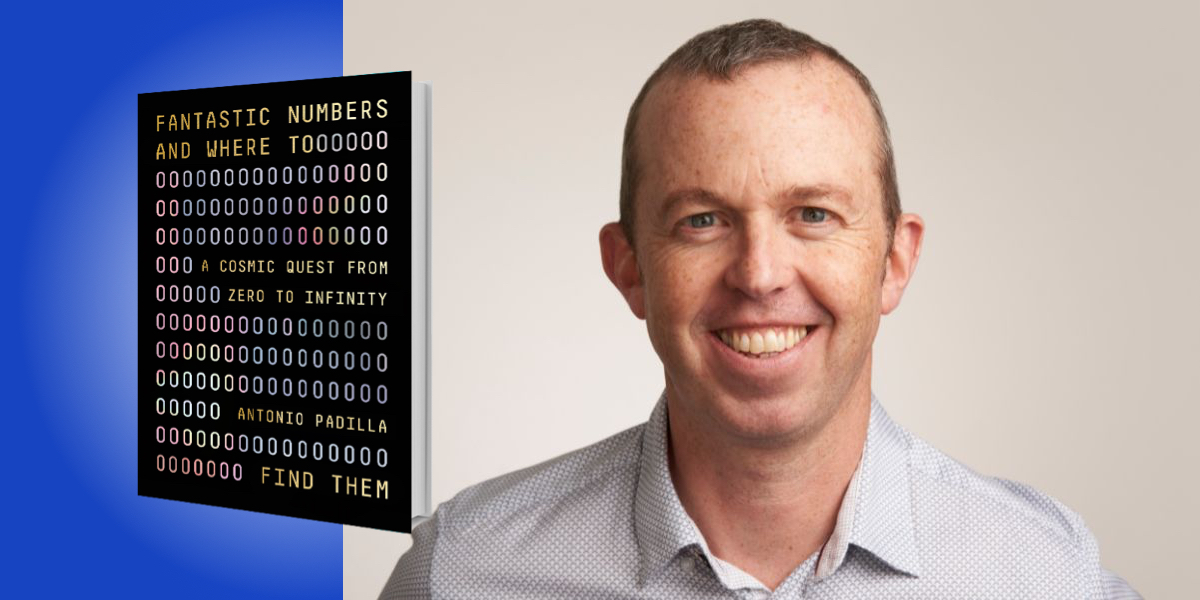 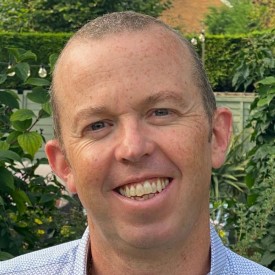 Antonio Padilla is a theoretical physicist and cosmologist at the University of Nottingham. He has served as the chair of U.K. Cosmology for over a decade and is known for his frequent guest appearances on popular YouTube channel, Numberphile.

Below, Antonio shares 5 key insights from his new book, Fantastic Numbers and Where to Find Them: A Cosmic Quest from Zero to Infinity. Listen to the audio version—read by Antonio himself—in the Next Big Idea App. 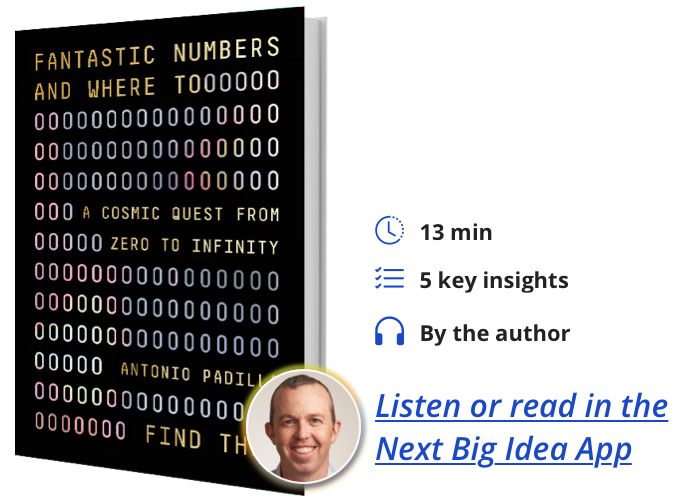 This is a little number, and little numbers betray something unexpected. For example, I’m a really bad singer. I’m definitely not expected to win The X Factor or American Idol. You might say that the probability of me winning is a really small number.

The Higgs boson is also unexpected, so it too has a small number. You may have heard of the Higgs boson. It made the news after it was discovered at the particle physics laboratory CERN in 2012. Particle physicists were running around excitedly at the time. The Higgs was said to be the last piece of the particle jigsaw, helping to explain the origin of mass in our universe.

What no one ever tells you is that we particle physicists were also feeling a bit ashamed. Our best microscopic theories told us that the Higgs boson was able to shape shift into other fundamental particles. All of that shapeshifting should weigh the Higgs down so much so that it weighs as much as a few micrograms—about the same as a fairyfly, a tiny wasp that happens to be the smallest insect in world.

“The Higgs was said to be the last piece of the particle jigsaw, helping to explain the origin of mass in our universe.”

The thing is, fundamental particles don’t tend to weigh as much as insects. Though the Higgs theoretically should weigh as much as fairyfly, it doesn’t. Its 0.0000000000000001 times lighter and nobody understands why. We’ve tried to explain what’s going on in numerous ways: considering extra dimensions, fancy super symmetries where we double the number of particles in nature, and we even tried breaking the Higgs into tiny little bits. To no avail, because the experiments at CERN have yet to see any evidence to explain the Higgs boson. The mystery remains.

The Higgs was unexpected, but it’s not as unexpected as our universe. Our universe is described by a really small number: 10(-120). That’s less than one part in a googol.

The universe is expanding, which means that the space between galaxies is getting bigger, not because the galaxies are racing away from each other, but because space itself is growing. This expansion is accelerating. Something is pushing on the universe, making it grow at an ever-increasing rate.

Most physicists think it is being pushed by the energy of empty space. This is the so-called vacuum energy—the energy left behind when you empty the universe of all the stars, planets, humans, and little green men, so that only the vacuum is left behind. You might think that something this empty could carry no energy, but that is not true. Quantum mechanics tells us the vacuum is a vibrant place, a bubbling broth of virtual particles popping in and out of existence. These particles weigh the vacuum down much in the same way they weighed the Higgs down. They give the vacuum an energy that can push the universe.

The problem is that it wants to push it too hard. When you do the calculation, you realize that the vacuum should have a hell of a lot of energy. In fact, the energy is so great, it should have pushed the universe into oblivion the moment it was born—but that didn’t happen. The universe grew large and old. That’s because the true energy of the vacuum is far less than we expected. To recover the amount of cosmic acceleration we see through our telescopes, we need the vacuum energy to be 10(-120) times smaller than our theoretical prediction.

It’s rubbish, isn’t it? I’ve spent most of my career thinking about this problem. The universe had to have known from the beginning that it would grow large and old. It had to have a degree of precognition.

Perhaps you’ve heard of a googol? It’s a 1 followed by a hundred zeroes. Well, a googolplex is bigger: It’s a one followed by a googol zeroes! To properly appreciate how big this is, consider a googolplician universe. That’s a universe that is a googolplex across in meters, inches, or some other earth-like unit.

“In a googolplician universe, your doppelgänger is out there, probably reading Book Bites.”

In a googolplician universe, you will find something remarkable: doppelgängers. Exact copies of me, you, and everyone you know. I don’t just mean lookalikes, but replicas, right down to the quantum DNA: same nose, same hair, even the same thoughts.

This all has to do with how many different ways you can assemble a human-sized volume of space. There are far less than a googolplex ways to do it. The reason has something to do with the physics of black holes. Anyway, one of these assemblies corresponds to me, one to you, one to empty space, etc. As you move throughout the googoplician universe, seeing repetitions is inevitable. There just aren’t enough arrangements available to keep it different every time.

In a googolplician universe, your doppelgänger is out there, probably reading Book Bites.

Think of a really big number and try to picture it. Are you still here? If you are, I’m pretty sure you didn’t think about Graham’s Number, because if you had, you’d be dead.

Graham’s Number is big. In fact, for a long time it was said to be the largest number ever to appear in a mathematical proof. Graham’s Number isn’t just big like a trillion, or even a googolplex. It’s a true leviathan. If you tried to picture its decimal representation written out in full, digit by digit, then your head would collapse into a black hole. It’s a condition known as black hole head death and there is no known cure.

It happens because there is crazy amount of information in Graham’s Number, and information weighs. What if we tricked Justin Bieber into thinking about Graham’s Number? As the digits of Graham’s Number entered his brain, he’d take on mass. Eventually, there is so much of this his brain starts to heat up and wants to explode. Assuming he can avoid this, what next? More digits, more information, more weight. Eventually he reaches a point where the only object capable of storing that much weight in a space the size of his head is a black hole.

“The hope is that one day we will be able to figure out what is really going on at the center of a black hole, and maybe, just maybe, at the moment of creation.”

Head-sized black holes are super dangerous. The problem is the surface of the black hole is very close to the dreaded singularity that lurks within. This is where space and time become infinitely torn and twisted and the gravitational field becomes infinitely strong. If a Black Hole Bieber were accosted by a fan, the tides of gravity on his black hole head would tear the fan to shreds. Graham’s Number would be bad news for anyone obsessed with Justin Bieber.

Black Hole Biebers may sound fanciful, but black holes are unmistakably real, and within them all lies the singularity—the place where spacetime touches infinity, where the gravitational field goes wildly out of control. This is where the physical world seems to break and our equations no longer make any sense. You don’t just find singularities inside black holes. You also find them at the Big Bang, when you trace the universe back to the beginning of time.

To conquer these infinities, we need a quantum theory of gravity—a way to think about the strongest gravitational fields and how they interact with all of the material world on the smallest of scales. We need a theory of everything.

Meaning a theory where the building blocks of nature are not particles, but strings. Tiny little strings, wriggling and vibrating, making up each and every one of us, and spacetime itself. These strings are expected to eliminate the infinities of gravity, and the hope is that one day we will be able to use them to figure out what is really going on at the center of a black hole, and maybe, just maybe, at the moment of creation. At genesis.

Through the symphony of strings, we may one day know the mind of God.

To listen to the audio version read by author Antonio Padilla, download the Next Big Idea App today: