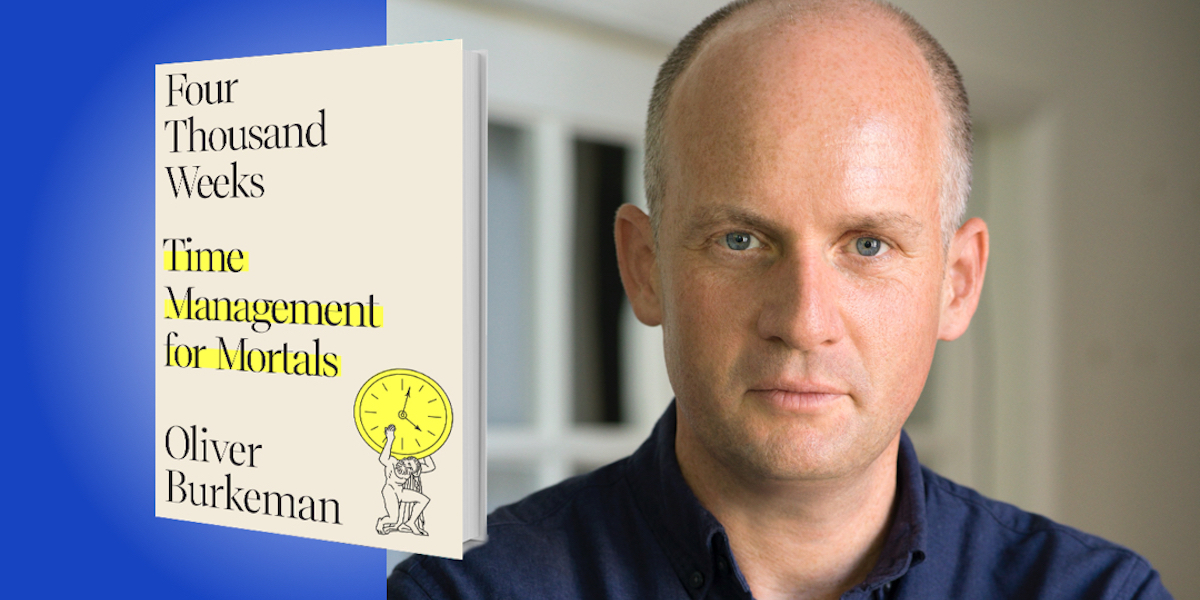 Oliver Burkeman is an author and journalist. For many years, he wrote a weekly psychology column for The Guardian called “This Column Will Change Your Life.” His latest book is an attempt to rethink how to make the best use of your time. Burkeman presents an alternative path to the obsessive, endless quest of checklist completion and schedule optimization: a path that’s much more meaningful in the end.

Below, Oliver shares 5 key insights from his new book, Four Thousand Weeks: Time Management for Mortals. Listen to the audio version—read by Oliver himself—in the Next Big Idea App.

1. There will always be too much to do.

This idea sounds like a recipe for despair, right? But I think it’s incredibly empowering. We live in a world of infinite inputs, so there’s no limit to the number of emails you could receive or demands your boss could make. By the same token, there’s no limit to the number of exotic travel destinations you wish to visit, or business ideas you might launch. And yet, if you live to be 80, you’ll have had about 4,000 weeks on the planet. So there’s a mismatch between the infinite inputs and our very finite capacities.

Indeed, it’s even worse than that, because of something I call the efficiency trap. When you get more efficient at processing things, working, and answering emails, you actually end up generating more things to do. And yet, most of our ideas about time management are premised on this notion that one day, if we try hard enough, if we find the right techniques and apply sufficient self-discipline, we might one day become the masters of our time, able to handle whatever might be thrown at us.

“When you get more efficient at processing things, working, and answering emails, you actually end up generating more things to do.”

One winter morning several years ago, I was sitting on a park bench in Brooklyn, feeling anxious about having more things to get done that day than usual, and trying to figure out an ingenious schedule for getting them all done. It suddenly hit me that none of these productivity techniques were ever going to work, in the sense of giving me unlimited capacities. Finite creatures can’t do an infinite number of things—that’s just math. Once you let this truth settle in, that’s when you get to drop this impossible quest, and direct your focus and time and energy toward a handful of things that really matter.

2. Distraction is an inside job.

We like to criticize Silicon Valley for creating diabolical social media platforms and devices that steal our attention from what we really care about and ought to focus on. And we’re right to criticize Silicon Valley for that—but there’s another side to this story. It’s what poet Mary Oliver once called the “intimate interrupter.” The call to distraction is coming from inside the house. We feel an inner urge to distract ourselves from whatever we really care about. Maybe it’s a challenging creative project, or a difficult but important conversation with a spouse. We actually want to distract ourselves and do something less important instead.

At first glance, this seems like a weird phenomenon. Why would it feel better to waste an hour doing something we don’t care about, instead of using it for something that’s close to our heart? This is a case of how uncomfortable it makes us to face up to our built-in human limitations. When you focus on something that matters, you’re forced to accept your finitude. You have to accept that you might not have the talent to write the novel you’re working on, that you can’t control how it will be received, that the conversation with your spouse might leave you feeling emotionally vulnerable. So, doing stuff that matters entails discomfort and confronting your limited control—and that’s scary. Of course, you’d rather hurry off into cyberspace, where you feel like a little god, the master of your domain.

That’s what I mean when I say that distraction is an inside job—we collaborate willingly with this disruption to our focus. But the good news is that once you see what’s going on, you can feel that discomfort of doing what matters, and realize that it won’t destroy you. You can take a more mindful approach, not trying to stamp out discomfort, but not letting it dictate your behavior either.

3. Patience is a superpower.

I think I can guess what you’re thinking when you hear the word “patience.” It’s basically the most boring virtue in the world. It feels passive and unexciting, and if someone tells you that some activity is going to require you to be patient, your first reaction might be that you want absolutely nothing to do with it.

However, Harvard art historian Jennifer Roberts makes a powerful argument that in a world that’s getting faster and faster by the month, the ability to let things take the time they take is actually an incredibly powerful way to exert influence over the world. She has her students choose a painting or a sculpture, and she tells them to spend three full hours looking at it.

I tried it, and it’s kind of magical. After an hour or so of immense discomfort, you start to see things in the painting that you never would have seen otherwise. This can be generalized to many aspects of life: making progress on creative projects, parenting, relationships, and (strikingly) to reading. If you can resist the urge to hurry, if you can slow down to the speed that the activity demands—even though it feels uncomfortable at first, even though it challenges that desire to dictate how fast reality goes—that’s when you get to grips with the thing you’re doing. That’s when you can really engage and make solid progress.

“It’s about moving through the world with curiosity about what will happen next, instead of a demand that it turn out according to your plans.”

We struggle to feel in control over our time because we try to find a feeling of certainty about the future, when (by definition) we are never going to attain that certainty. I’m not suggesting that we give up planning completely—but we go wrong, psychologically speaking, when we treat that plan as an attempt to feel certain about the future from the vantage point of the present. We forget, to quote the meditation teacher Joseph Goldstein, that a plan is just a thought. It’s a present statement of intent. It’s useful for choosing how to act in the moment, but it’s a recipe for permanent anxiety if you’re constantly moving into the future, wondering if things will conform to your plans or not.

Full disclosure: I come from a family of compulsive planners—people who like to build in seven extra hours to get to the airport, just to be sure that nothing will go wrong. Of course, if you leave seven hours to get to the airport, chances are good that you won’t miss your plane. You’ll just waste a few hours of your life that you could’ve used more meaningfully. But time is a strange thing—you can never be certain that something won’t cause you to miss your plane, because that’s all in the future. The anxiety is never fully allayed. The truth is that we never really have time at all, at least not in the sense that we have money or physical possessions. We don’t get to control what’s coming next. No one does.

The spiritual teacher Jiddu Krishnamurti used to say that the whole secret to his incredible peace of mind was, “I don’t mind what happens.” I don’t think that means we shouldn’t fight for a better and more just world, and I don’t think most of us are ever going to reach his level of pure serenity. But for me, that idea of not minding what happens embodies a deep truth: that planning is something to be held lightly. To be used to make decisions about what you want to do right now, but without this constant tension of needing the world to turn out the way you want it to. It’s about moving through the world with curiosity about what will happen next, instead of a demand that it turn out according to your plans.

“Making some tiny contribution to the betterment of the environment or your neighborhood or the political culture—that matters.”

There’s a great thought experiment by the late philosopher Brian McGee. He said, “Imagine someone who’s turning 100 today, and imagine that there was someone else who turned 100 the day that person was born, and so on, back through history.” So, you can imagine all these 100-year lifespans in a chain, end-to-end. Well, when you look at things like that, the Renaissance was just six lifetimes ago. Jesus was around 20 lifetimes ago. The Golden Age of the Pharaohs was about 35 lifetimes ago. That’s nothing. Human civilization has not been around very long at all. And an individual life is incredibly tiny.

This is the kind of talk that’s liable to provoke an existential crisis, but in fact, I think there’s an uplifting message. First, many of us go through life agonizing about the various decisions we have to make, and it can be a huge relief to realize that on a cosmic level, the stakes aren’t that high. If you’re scared about launching a creative project or reaching out to someone, you might as well do it, because it doesn’t matter much, on a cosmic level, if it goes wrong.

Additionally, another philosopher, Iddo Landau, has pointed out that when we think of ourselves as grandiose or important in the scheme of things, it leads to problems in creating a meaningful life because we set the bar too high. It’s as if you can only count your life as meaningful if you changed the course of world events or became incredibly famous.

If we cut everything down to size and drop back into the reality of our situation, you’ll see that far more things than you’d thought count as meaningful ways to spend your time on Earth—even ordinary things. Cooking a meal for your family—that’s meaningful. Creating things that help or entertain even a small number of people is meaningful. International fame isn’t required. Making some tiny contribution to the betterment of the environment or your neighborhood or the political culture—that matters.

All sorts of things that you’re doing right now might count as more meaningful than you realize. So, breathe a sigh of relief. Your shoulders can drop. Be happy in the knowledge that you really are using your limited time in a way that matters.

To listen to the audio version read by Oliver Burkeman, download the Next Big Idea App today: