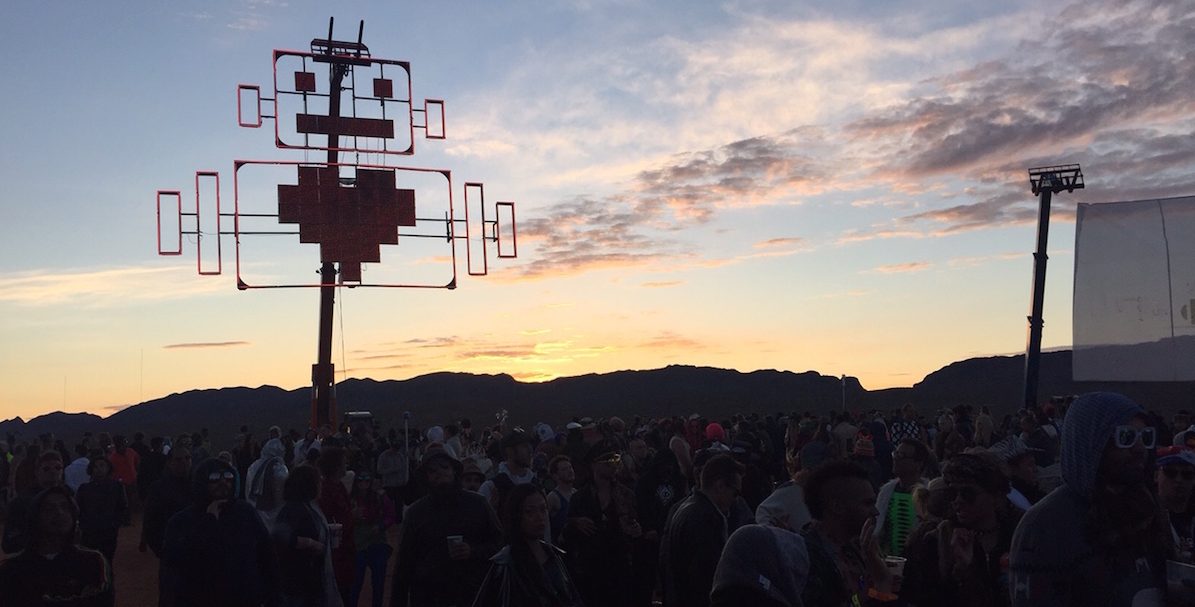 The weather forecast was thunderstorms and hail, but that didn’t stop me and five thousand other sequin-clad guests from making our way to the Moapa River Indian Reservation on the outskirts of Vegas to experience the second installment of Further Future Festival earlier this month. I attended last year on a whim, and was excited to return to the weekend-long retreat that combines inspirational TED talk style forums, world-class DJs, gourmet pop-up dinners, a wellness “spa” and customized schwag bearing the festival’s adorable alien emblem.

Further Future is like a mini Burning Man for busy, career-minded “doers”, who see the weekend not as a break from reality, but as an opportunity to feel more connected to it. It’s a symposium of spiritual awakening and philosophical discussions about the future of humanity, scored to the beats of a Robot Heart set. Plus, who could resist the chance to dress like Daft Punk and sip a twelve dollar coconut turmeric latte, while watching the sunrise over the desert?

The overarching theme of this year’s festival was optimism, and the positive vibes that emanated from festival-goers as they danced through the rain were echoed in the visionary words of the speakers.

Have You Ever Been Experienced?

Joann McPike, the director of the THINK Global School, opened her talk about the future of education by asking, “How many of you enjoyed high school, or found what you learned there to be relevant to your adult life?” The deafening silence that followed proved her point. An experiential learner herself, McPike started THINK Global School as a way to teach her son about the world, by allowing him to explore it. Today, the traveling boarding school boasts students of over twenty different nationalities and moves to a different country every semester, with a curriculum tailored to each specific culture. McPike stressed the importance of global perspective as a means of understanding the other sides of history, and encourages her students to pose the questions, “Why am I learning this, and why should I care?” McPike’s next project is an upcoming think tank where educators from around the globe will gather to discuss what students need to learn in the 21st century.

Education was also touched upon by premier neuroscientist Adam Gazzaley, who spoke about the inevitable shift from information transfer (i.e. teacher to student) to helping people build tools to better process information (i.e. improving our brains). The solution? Video games. Gazzaley’s company Akili Interactive is building customized games from scratch to help improve mental health and intelligence. Project Evo, a game designed to help kids with ADHD, is currently undergoing an FDA trial to evaluate the game as a therapeutic modality. If successful, it will be the first “prescribed” video game, and will usher in an age of personalized digital medicine.

Geneticist Riccardo Sabatini concurred with Gazzaley in his discussion about the future of the human genome. Through machine-learning software and GPO hard drives (the same ones used for gaming), it will soon be possible to read the three billion letters of genetic code that make up each human being, and really figure out what it is that makes us unique. As a result, we’ll be able to create medicine that is highly personalized, and track illnesses long before their onset. When the question of eugenics was raised, Sabatini defended this kind of genetic testing as a highly ethical and regulated means to an end (improving our health) and will unlikely lead to the legalization of the kind of germinal genetic engineering, used to create “designer babies.”

It’s Getting Better All The Time

Former Google CEO Eric Schmidt (and current Chairman of Alphabet, Inc.) also stressed the need to embrace technology, rather than fear it. He shared his personal stance that things have actually been getting better in every facet of human experience, and will continue to do so. In the past twenty years, over two billion people have been lifted out of poverty. We have access to more information than ever before, and while we’re addicted to technology (most of us would deny ourselves sex and alcohol long before losing our beloved smartphones), we are also becoming smarter and more conscious because of it. He went on to predict that in the not too distant future, the advent of self-driving cars will save hundreds of thousands of lives, and A.I. will become a normal part of our daily routine. Stan Chudnovsky of Facebook, discussed the advent of “M”, the new bot on Facebook Messenger, which will act as a personal concierge, carrying out the work of a virtual personal assistant. Think of it as a more sophisticated Siri.

The Cost of Progress

But in all this talk of progress, the inevitable concerns arose. What about the downsides of technology? The fact that it’s making us more isolated and more self-absorbed? That our data are more easily collected and monitored than ever before? CEO of 6sense, Amanda Kahlow, spoke about the future of data and A.I. and her view that while data monitoring is disconcerting, most of it will be used for good rather than bad. She brought up the example of her elderly mother, who has a tracking device on the floor of her home so that her family can make sure she’s still walking around. That kind of monitoring can be used to save lives, rather than destroy them.

One word that came up, again and again, was kindness. In all aspects of human experience, from food, to fashion, to technology and education, there seems to be a desire for more compassion, more transparency, more accountability, and more democratization. Radha Agrawal, co-founder of the Daybreaker parties, emphasized that it’s really all about human connection, and offered a prediction shared by Thich Nhat Hanh: “The next Buddha may be a Sangha.” In other words, it’s about building a community of leaders, and allowing the hope that prevailed at Further Future to resonate on a global scale.

Darcy currently resides in Los Angeles where she mostly writes screenplays about historical figures. She received the 2016 Sundance Sloan Commissioning Grant for a script she is co-writing about Alexander Graham Bell, and is developing a slew of other film and television projects.