Getting Along: How to Work with Anyone (Even Difficult People) 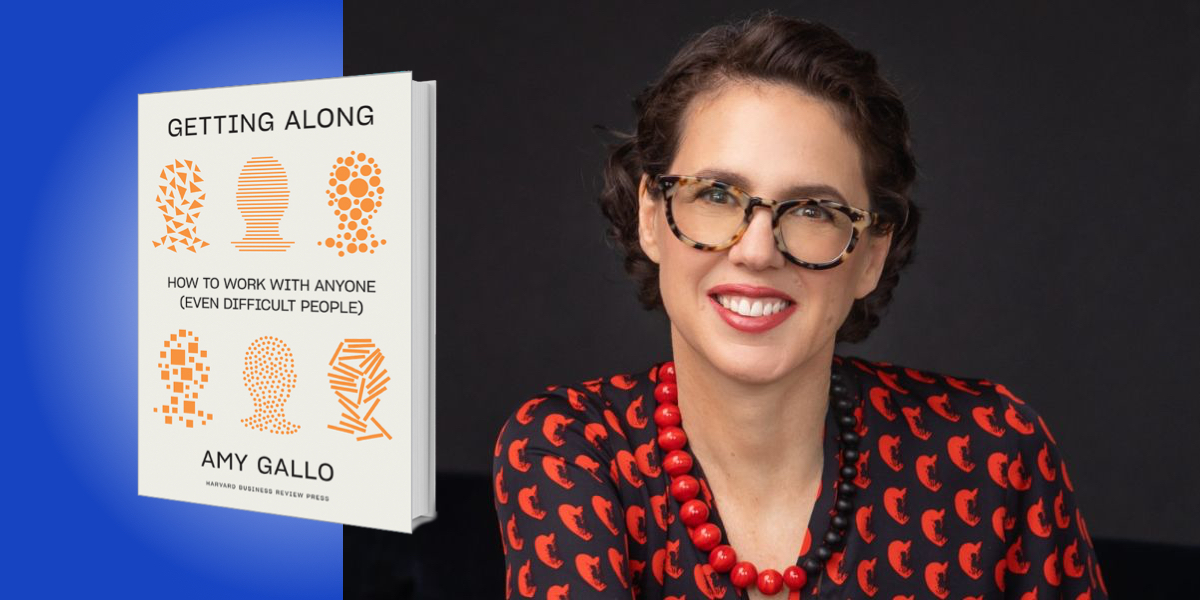 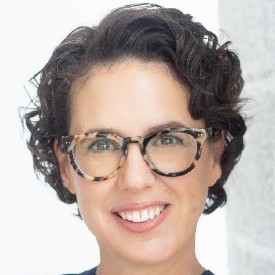 Below, Amy shares 5 key insights from her new book, Getting Along: How to Work with Anyone (Even Difficult People). Listen to the audio version—read by Amy herself—in the Next Big Idea App. 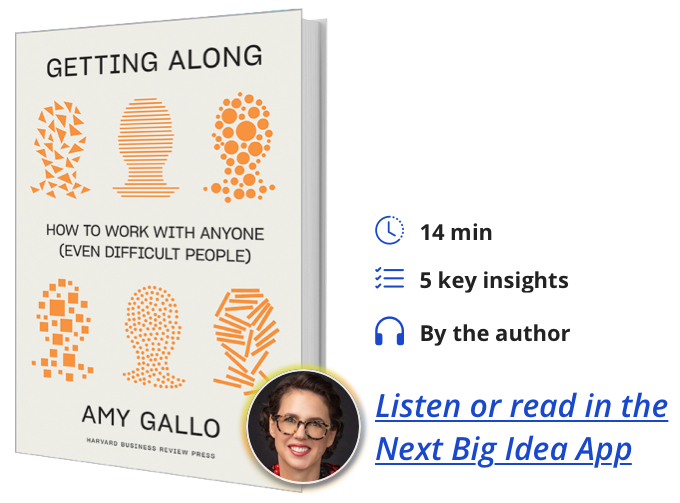 1. The definition of a “difficult person” is often informed by bias.

You can’t talk about navigating tricky relationships at work without paying close attention to issues of bias, prejudice, microaggressions, social-identity threat, gaslighting, power, coalition building, and allyship. It’s important we examine the role bias plays, especially in what and who we define as “difficult.” It is tempting to use that label or even the word “toxic” when talking about someone who pushes our buttons, but we need to remember our interpretation is informed by our own biases and prejudices.

One particular example is from when I was working as a consultant. I had a client, a Black woman, who I was hesitant to push back on because I worried she would get angry. One of her direct-reports—a white woman—stopped me in the hallway of their offices one day and mentioned that I seemed to be holding back with her boss. When I said something about wanting to keep the client happy, she responded: “She’s not going to bite your head off.”

Forced to reflect, I realized I was allowing unfair stereotypes to influence my view of her. In fact, I’d seen my client’s direct reports challenge her multiple times and she took it well. I’d never seen her irate. Not only was I doing her a disservice by typecasting her, I was also failing to do my job, which included challenging the status quo.

Our brains are wired to conserve resources. They take shortcuts, put people and things into categories, and assign attributes to those categories informed by societal, sociological, and historical constructs of race, gender, sexual orientation or class. Certain groups are labeled as easy-going, others as smart, others as threatening.

Before deciding that someone in your life is “difficult,” play devil’s advocate with yourself. Explore whether you are seeing the situation impartially by asking yourself the following: If your colleague was a different gender, race, sexual orientation, would you make the same assumptions? Would you be willing to say the same things or treat them the same way?

“Before deciding that someone in your life is “difficult,” play devil’s advocate with yourself.”

I used this tactic when I examined my reaction to my client. Would I assume she was going to be “angry” if she was a white woman, a white man, or a Black man? The answer was clear: no. If the client were a man, the same behavior may have been interpreted as “passionate” or “committed,” perhaps “curt” at worst. Anger wouldn’t have come to mind. This was an important exercise for me to recognize my own questionable logic, and start to move beyond it.

When one tries to sort out a contentious situation with a colleague, there’s rarely an objective truth. We all come to the workplace with different perspectives and sets of values. We disagree on everything, from whether it’s OK to be five minutes late to a meeting or if it’s justifiable to interrupt someone who’s going on and on. It’s not realistic to work with people who see eye-to-eye with you all the time.

There’s a concept from social psychology called naive realism that explains just how different our perspectives can be. Naive realism is the tendency to believe that we’re seeing the world around us objectively. If someone doesn’t see it the same way, they’re uninformed, irrational, or biased. One study in this area looked at what happened when participants were asked to tap out the rhythm of a well-known song, such as “Happy Birthday,” and listeners tried to guess the song. Those doing the tapping thought that the listeners would guess the tune around 50 percent of the time, a huge overestimation given that they only guessed right two and half percent of the time. Once we know something, like the tune of a song, or the perfect solution to this quarter’s budget shortfall, we find it hard to imagine that others won’t also recognize it.

Naive realism is connected to another relevant cognitive bias: fundamental attribution error. This is the inclination to assume another person’s behavior has more to do with their personality than it does with the context or situation. If a colleague is late to a meeting, one might presume they’re disorganized or disrespectful, without acknowledging that perhaps they were caught in traffic or in another meeting that ran late. We do the opposite when it comes to ourselves. When you’re running behind, you probably focus on all the circumstances that led to you being late, not the idea that you are a flawed human.

Remember these two concepts when you’re dealing with a coworker you find difficult. You can spend hours debating whose interpretation of the situation is correct, but reaching agreement on the “facts” is very unlikely. You don’t have to agree to get along. You need a path forward, not a shared worldview. That often starts by challenging your own perspective. Ask questions like: What if I’m wrong? How would I act differently? How do I know that what I believe is true? What assumptions have I made? How would someone with different values and experiences see things differently?

The answers to the questions matter less than the exercise of asking them. They are an important way of reminding yourself that your view is just that: your view. Others see things differently and that’s okay.

3. It’s not just negative relationships that need attending to.

“Ambivalent relationships are often just as problematic as the unambiguously negative ones.”

However, a relationship doesn’t have to be “toxic” or even mostly negative to have these effects. When I think about the “difficult” people I’ve worked with, many of the ones that stand out in my mind are those who weren’t challenging all the time. An example would be a former colleague who I’ll call Tara. We were never friends exactly but we enjoyed chatting at the beginning of meetings and, at social gatherings, she and I often talked about our young families. I found her funny, personable, and good at her job — most of the time. When I got up the nerve to ask another coworker whether he also found her difficult to read at times, he perfectly articulated what I was experiencing: “You just never know which Tara you’re going to get. ‘Good Tara’ is really nice and seems to have your back. ‘Bad Tara’ is grumpy and focused on her career and has no qualms about throwing you under the bus.”

None of our relationships are fixed. We might assume that the positive ones will always stay that way and the negative ones are doomed to be torturous forever. That mindset can lead us to neglect our work friendships, and completely dismiss the more complicated ones. If you think about the people you’ve had connections with over your career, they likely didn’t remain the same over time; they may have been malleable. After all, good relationships can sour, and some of the toughest ones can be transformed, as long as you put in the time and effort.

4. Escalating is an option that has to be done carefully.

When your good-faith efforts at improving your dynamic with a coworker don’t work, there’s always the option of going to your boss or higher-up in the hopes that they will handle the situation. This is tricky though, so you need to weigh the tradeoffs carefully. Will escalating the issue make you look bad? Do you risk further damaging your relationship with your colleague if they discover you went behind their back or brought in reinforcements? Will the person you appeal to believe you?

Escalation only works if the person has the power, motivation, and skills to do something about it. That may not always be the case. Ask yourself: Who is the right person or department to turn to? Will they be open to helping you? Will they be discreet? Do they have the skills or authority to give your difficult colleague feedback? Are they sufficiently motivated to take action?

Turning to other people doesn’t always work, especially if they are ill-equipped (or unwilling) to address a colleague’s behavior. Plus, if they solve the problem for you—perhaps behind closed doors—you won’t develop the skills you need to deal with similar issues in the future.

“Escalation only works if the person has the power, motivation, and skills to do something about it.”

Before approaching a potential ally, whether they’re your boss, your boss’s boss, an HR representative, or someone else, think about how they’ve responded to comparable situations in the past. Did they give good advice? Did they follow through if they offered assistance? Did they make things better, or worse? The answers to these questions will help you decide whether it’s actually a good idea to escalate or not.

5. Sometimes we have to be the adult in the room.

One of the things I hate most about dealing with difficult relationships is that it feels like I have to do all the work while the other person gets to continue misbehaving or mistreating others.

Why do all the work when the other person is at least partly to blame? There are two reasons. First, in any tense exchange, regardless of who’s at fault, you can only truly control your thoughts, actions, and reactions. Second, even if you’re absolutely certain that you’re right and they’re wrong, it (almost always) takes two to tango. Maybe your optimism and tendency to downplay risks spurs your pessimistic colleague to point out more of them. Perhaps you’ve inadvertently signaled to your coworker that you don’t like direct confrontation, so they’ve resorted to passive-aggressive tactics to get their point across. The clearer you can be about your role in the conflict (even if it’s minor), the clearer a resolution will become.

It’s not about beating them at their own game or even out-strategizing them. Resolutions come about when we experiment with different tactics and find solutions for each particular situation that also feel right for both parties. In fact, sometimes trying something new, even something small, can shift the dynamic entirely. The key is to recognize that any colleague is unlikely to transform into a different person. Ultimately, little can be said about whether and how much someone else is willing to change.

Your relationship with your coworker isn’t something that’s happening to you. It’s a dynamic that you likely participate in and therefore have the ability to do something about. Although we can’t control how our brain instinctively reacts to a stressful situation, we can reappraise and alter our perception and response. Similarly, you may not be able to change how a colleague behaves, but you can change the way you interpret and respond to their behavior. Keeping that in mind will improve your chances of building stronger, more fulfilling relationships at work.

To listen to the audio version read by author Amy Gallo, download the Next Big Idea App today: