Getting to Diversity: What Works and What Doesn’t 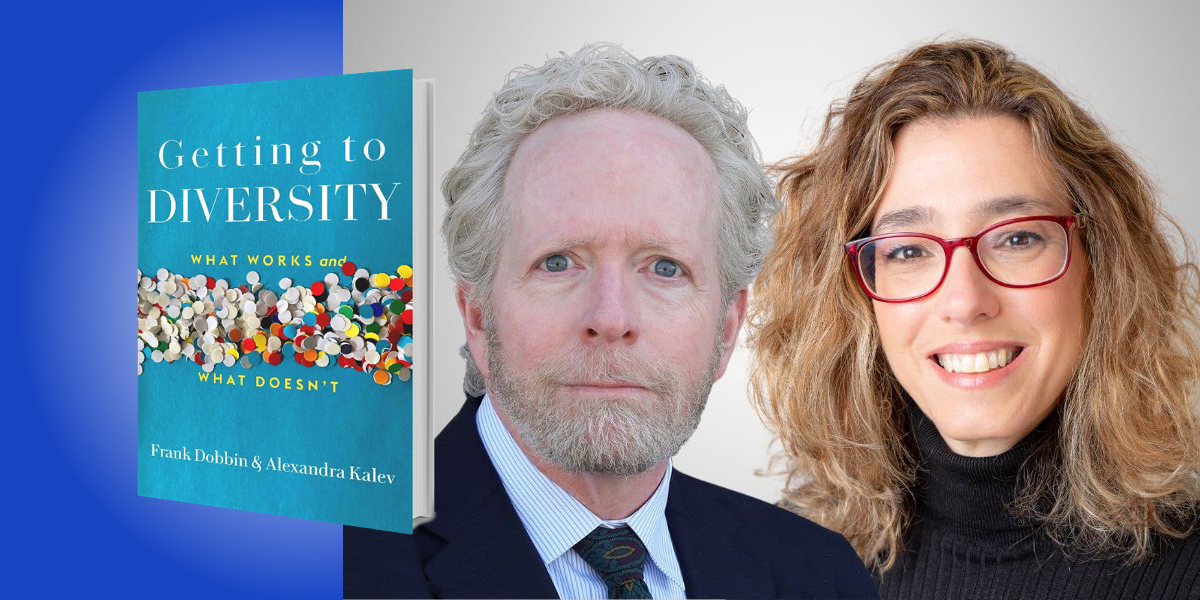 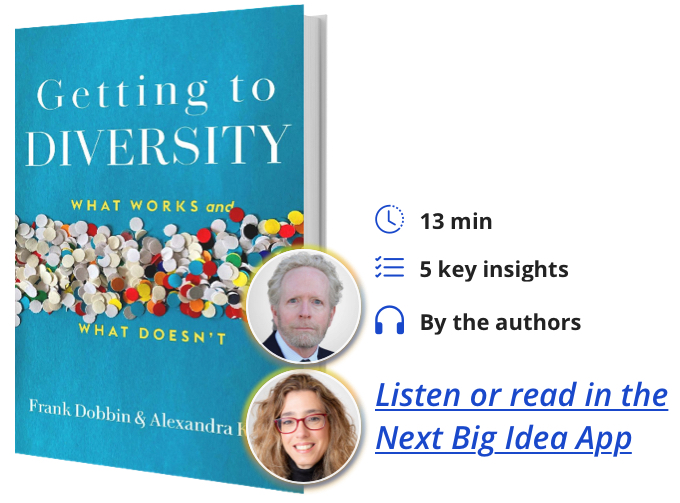 1. The proof is in the numbers.

Businesses set numerical targets for everything, but when it comes to diversity, they look at everything but the numbers that really matter. They look at exit surveys after diversity training, climate surveys, or their own Best Diversity Company ranking from Forbes or Fortune magazine. These are supposed to capture whether a firm is inclusive. However, if diversity programs are working, that should show up in the headcount. There should be more Black managers than there used to be.

That’s what we measure, whether the workforce is changing. We look how different programs affect white, Black, Latinx, and Asian-American women, and men, in management. With this data, we are able to spot the programs that lead to increases in diversity. Most popular programs make things worse. If you’ve ever been forced to go through a lame online diversity training, maybe that won’t surprise you.

Companies have been using programs that backfire, and they didn’t know it because they don’t track the numbers. Therefore, it is no wonder that the odds of a Black or Hispanic worker in corporate America making it into management are about the same as they were 40 years ago.

Deloitte spotted problems in their own career systems in the early 1990s. Women were 50 percent of new consultants and accountant hires, but they were shut out of mentoring, training, and the teams with the biggest accounts. Six years after getting hired, almost no women were being promoted to partner. Deloitte opened all of these things up to women, and soon the firm was at the top of the industry for women partners—and it still is.

“Mentors more often choose protégés who look like them, and managers are mostly white men.”

By opening up recruitment, mentoring, and management training systems to all, companies can expand diversity quickly and avoid backsliding. The new systems lock in the change. For recruitment, companies often visit the Big 10 schools their managers graduated from, but not historically Black colleges and Hispanic-serving universities, where they would find many more people of color. Cracking the recruitment system wide open means sending managers to recruit at those schools, too.

Mentoring is often informal because people think mentors and protégés will find each other. However, mentors more often choose protégés who look like them, and managers are mostly white men. McKinsey found that in big finance firms, 75 percent of Black employees have no other Black person on their team, meaning no one from their group to mentor them.

Cracking open mentoring means creating a formal system and making sure every single employee gets offered a mentor—and matching is based on interests not on race or gender. Management training itself is often informal. For example, a store manager may use a slow day to show a cashier how to do scheduling or payroll. Cracking training open means creating a formal program and inviting everyone to sign up. The data are in—companies that crack career systems wide open in these ways see large, and sustained, increases in the diversity of workers—even managers.

That may seem obvious, as leaders should be leading. In diversity efforts though, firms often put the entire job on diversity and inclusion departments, or on consultants. This leaves managers out of the picture. To change anything in a firm, managers need to see the problem, help devise solutions, and put them in place.

Getting leaders to be change-agents doesn’t happen by training but by doing. It can happen, for example, when managers join a recruitment visit to a historically Black college. After such visits, they realize the problem right away; their firm has been neglecting an obvious talent pool. When a manager mentors the only Black person on the floor, they get to know them and the barriers they face. When a leader joins a management training team, they meet aspiring managers from different groups and backgrounds. By helping to recruit, mentor, and train people from other groups, leaders become part of the solution. That is why all three of these solutions work so well. What works best is getting managers, including white men, to join a diversity task force.

“By helping to recruit, mentor, and train people from other groups, leaders become part of the solution.”

Taskforces look first at the firm’s data on hiring, retention, promotion, and layoffs by race, ethnicity, and gender. That usually serves as a wake-up call when they see that some groups have it tougher than others. Managers on the task force then brainstorm for solutions. These solutions might be making sure Latinx first-line managers get mentoring, or re-training workers from downsized jobs, who tend to be women and people of color. A solution might also be giving new parents more latitude in building their work schedule.

Task force members bring the solutions they devised back to their departments and make sure they get implemented. Managers on task forces tell us this experience really woke them up and got them to see that there was a real problem. It also helped them realize that the career barriers they discovered were not hard to fix. Most solutions are just a matter of using management ingenuity to open up those bottlenecks. Deloitte put a task force in every office and asked them to look at the data and figure out solutions. Every office has different bottlenecks, and therefore needs different solutions.

4. Work-life supports are a secret weapon for achieving diversity.

It’s no secret that everybody needs work-life balance, but women and people of color need these supports most. Opening up work-life supports is a very effective all-around diversity engine.

Most women still do more than their share of caregiving at home. Parents of color—women and men—often do more caregiving: they typically don’t have the income to allow one parent to take a break from working full time, or to hire help at home. Without help, women and people of color may quit to take a job that gives them more work life support. That sets back their career progress, and the employer loses recruitment and training costs.

This can be easily avoided. The problem is that most companies, even those that have formal policies, still treat work-life supports as perks for valued employees. This means that the CEO’s right-hand woman gets the flexibility she needs, but not a rookie in the mailroom. This also means that many workers who need work-life supports don’t ask for them. They know their bosses will not approve.

Many managers are still afraid that flexibility and remote work will reduce productivity. But getting work life supports to work for everyone isn’t rocket science. One can simply look at what happened during Covid when workers transitioned to remote work and flexible schedules overnight. Productivity even increased in many cases. That’s a proof of concept for anyone who is still on the fence.

“Without help, women and people of color may quit to take a job that gives them more work life support.”

When work cannot be done at home, like in retail jobs, firms can easily offer flexible, and predictable, schedules. The Gap experimented with planning shift schedules two weeks in advance and allowing workers to swap shifts. After nine months, supervisors reported that managing the change was a snap, and in stores that made the change, sales increased by seven percent and productivity rose by five percent.

The most popular diversity programs blame managers for slow progress. These include diversity and harassment training, discrimination and harassment grievance procedures, and HR rules to quash bias. They don’t just fail; they reduce workforce diversity by alienating managers.

Training programs begin by trying to convince people that they are biased, and then list everything they’ve probably been doing that is against the law. Harassment training shows employees that they can’t even recognize harassment, and spells out what the law supposedly prohibits. Our interviews show that this approach makes white men feel guilty and defensive, which is a poor strategy for winning people over. Our statistical analyses also shows that it leads to decreases in women and people of color in management.

Grievance procedures pose a similar problem. They focus blame on individuals, rather than on systems. It is true that individuals may harass or discriminate, but these solutions lead to defensiveness and retaliation against people who file complaints. That often leads those people to quit. The ultimate irony is when word gets out that the grievance system backfires on those who complain, it stops anyone from complaining, and the top brass concludes that no complaints means there are no problems. The company then becomes complacent.

To listen to the audio version read by authors Frank Dobbin and Alexandra Kalev, download the Next Big Idea App today: