Ideaflow: The Only Business Metric That Matters 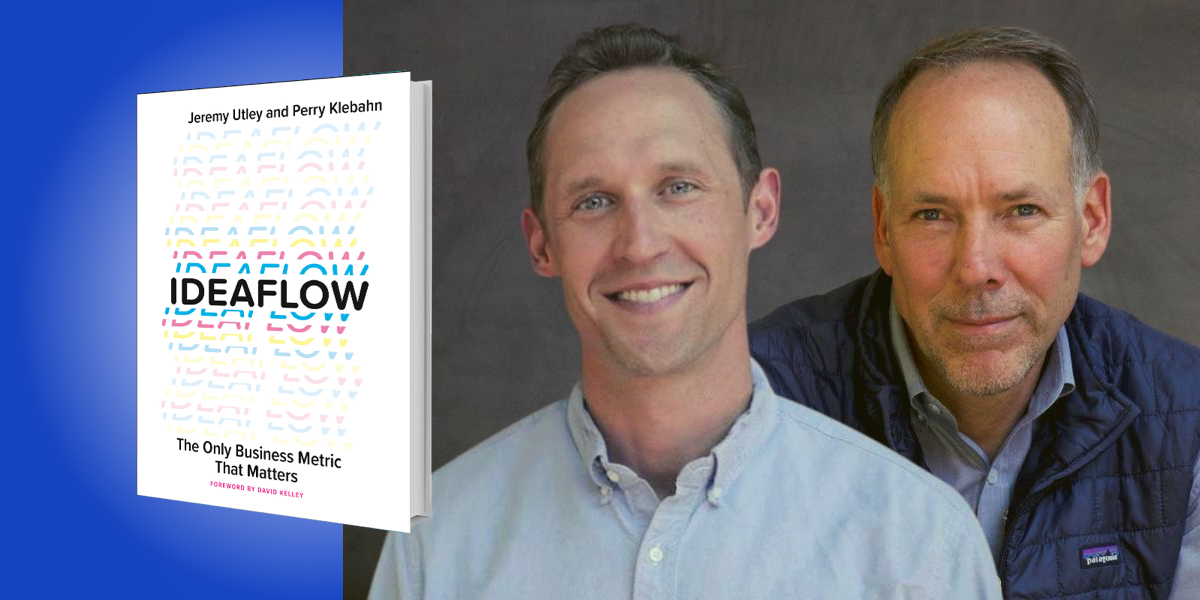 Jeremy Utley is the Director of Executive Education at Stanford’s Hasso Plattner Institute of Design (aka “the d.school,”) and an Adjunct Professor at Stanford’s School of Engineering. His courses have been experienced by nearly a million students of innovation worldwide.

Below, Jeremy and Perry share 5 key insights from their new book, Ideaflow: The Only Business Metric That Matters. Listen to the audio version—read by Jeremy and Perry—in the Next Big Idea App.

1. Innovation is not an event; it’s a practice.

In far too many organizations, the word “innovation” conjures images of a hackathon or a workshop. Few people treat it like what it actually is: a capability, a craft that can be honed through practice. No one asks to be dropped off in the ocean after their first swim lesson, or books Carnegie Hall after their first piano lesson, but we effectively do just that when it comes to innovation. We expect everybody to be able to “sprint” at a moment’s notice, with no training and no preparation.

Like every other capability, flexing the innovation muscle takes discipline. Want to be a pianist? Do your scales. Want to be a swimmer? Put in your laps. Want to innovate? Master Ideaflow, a proven technique for generating a volume of solutions to a problem and discovering which is best via rapid, scrappy experimentation. For all the hype that innovation gets, the secrets of breaking through remain shrouded in mystery. Methods beat muses, and methods can be learned.

The mantra of “zero to one” is near-gospel in Silicon Valley, but here’s the problem: it’s just not correct. Never mind the fact that the human brain is incapable of creating from nothing—ideas are really just connections between two or more things we already know—the truth is that the right ratio is the exact opposite! Research conducted by Stanford professor Bob Sutton found that on average, it takes 2,000 ideas to get to one commercial success. Our own experience—corroborated by stories from innovators as varied as Dyson Vacuums, Saturday Night Live, pharmaceutical discovery, and the Taco Bell Food Lab—confirms Pauling’s adage: “The best way to have a good idea is to have a lot of ideas.”

“Research conducted by Stanford professor Bob Sutton found that on average, it takes 2,000 ideas to get to one commercial success.”

That’s not to say that we need to have a lot of good ideas. Steve Jobs is often hailed as the quintessential innovator, yet when he met with Sir Jony Ive, he’d regularly say, “Hey Johnny, wanna hear a dopey idea?” In his memorial address, Ive remembers how “most of the time they really were dopey. Sometimes they were truly terrible. But every once in a while, they’d take the air out of the room and leave us both breathless.”

When thinking of Steve Jobs, nobody thinks “what a dope!” We think of disruption, redefining categories, and customer delight. Yet Jobs understood what few do: to get to delightful ideas, you’ve got to be willing to have, and share, dopey ones too.

One of the oldest assignments at Stanford is to keep a “bug list,” assigned decades before computer programming co-opted the verbiage. Simply, it means to impart the discipline of attending to annoyances, and writing down the things that bug you. It turns out that little irritations are the seeds of innovation. Here’s the thing though: we keep looking for what’s wrong even when being critical won’t help us achieve our objective. A prime example is when a team is looking to generate possibilities. Everybody’s been in a brainstorm with “negative Nathan,” that’s why so many of us dread them. Put rough ideas in front of that guy? No way!

Innovation is certainly about looking for what’s wrong—cultivating a sensitivity to problems to be solved—but it’s also about being able to shut that instinct off from time to time. In idea generation mode, the smartest person on the team isn’t the person who can find the logical flaws, but rather, it’s the person who can see the most possibilities. Successful idea generation is about looking for what’s right, with a group of people willing and open to someone else’s ideas, to spark something new. This is called being “sparkable.” Instead of asking, “What do I think of this idea” when generating, ask, “What does this idea make me think of?” That’s a far more useful question.

4. Ignore the experts, listen to novices.

“There is nothing new to be discovered in physics now,” the revered Lord Kelvin reportedly told the British Association for the Advancement of Science in 1900. “All that remains is more and more precise measurement.” This was, of course, merely five years before Einstein’s “year of miracles.” Over the course of a few months, Einstein wrote a series of papers that would transform the way we see the universe.

“It’s often the novices who make bold leaps, simply because they don’t know the rules of the game.”

Kelvin can hardly be blamed for being so wrong: radical leaps of invention rarely come from insiders. It’s often the novices who make bold leaps, simply because they don’t know the rules of the game. When a young Denys Overhauser unveiled the mathematically-informed designs of the stealth bomber (which registered a radar signal 1/1000th the size of the next best design, ever) as a part of Lockheed Martin’s legendary Skunk Works, the head of the aerodynamics division supposedly suggested he be burnt at the stake. Lockheed said, “I’ve got a slide rule older than this kid.”

When a representative of Mike Winklemann (aka Beeple) reached out to Christie’s auction house to explore the radical idea of including a piece of digital art in an auction, it only worked because Megan Doyle, a junior cataloguer, “didn’t have high value clients to keep her from trying something new.” After “Everydays” sold for a record-breaking $69 million, the experts started to see the light.

“Should I spend my precious time or money on this idea?” Every entrepreneur has asked themself this question. With surveys being cheaper and easier to create than ever, the draw of big data is almost irresistible. So when our founders hear us advocate for little data, they do a double-take. Little data though, the kind of data that a couple of founders can create through a series of cleverly devised, scrappy experiments, is proprietary data. It’s high-signal, low cost data that helps founders cross the chasm from inspiration to conviction.

As David Ogilvy once quipped, “Consumers don’t think how they feel. They don’t say what they think and they don’t do what they say.” So why survey, creating big but unreliable data sets when you can create little data, and craft decision moments that reveal actual human behavior, rather than hypotheticals?

Your goal should be to create highly believable moments in as little time and expense as possible—this is maximizing experimental efficiency. If there’s one focus area for an early-stage concept, start with desirability. Certainly, viability and feasibility are important considerations as well, but desirability is the easiest risk to address quickly. Most teams go into prototyping mode asking, “Could we do this?” when really, they should be asking, “Should we do this?” Low resolution, scrappy experiments can provide valuable insight and the confidence needed to move on to the harder-to answer questions like, “How do we do this?”

To listen to the audio version read by authors Jeremy Utley and Perry Klebahn, download the Next Big Idea App today: