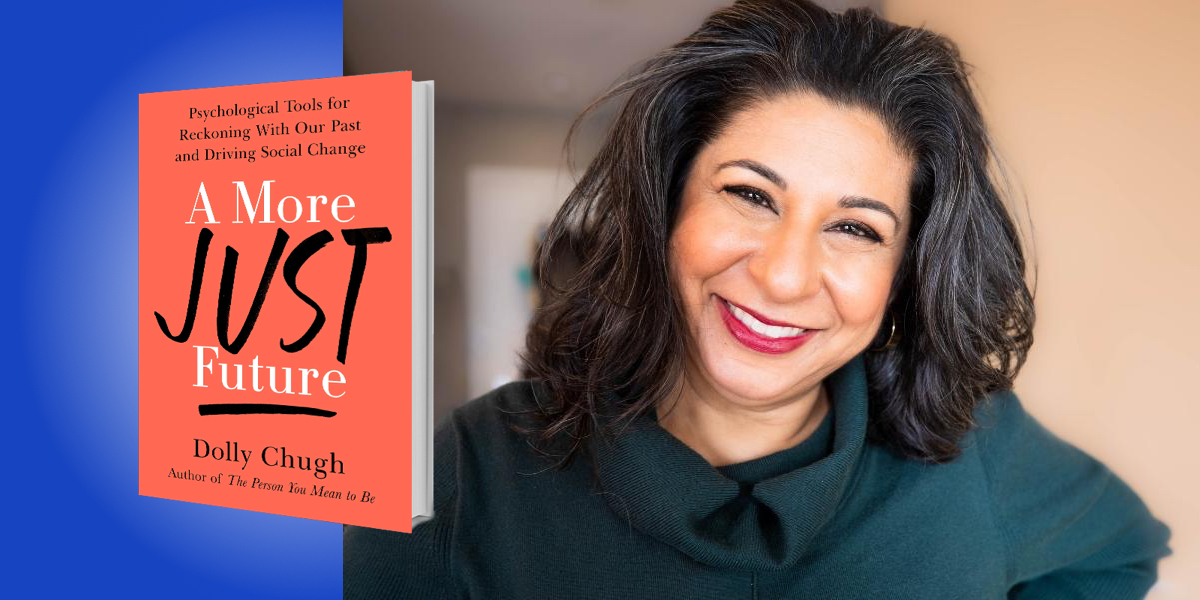 Dolly Chugh is a Harvard educated, award-winning social psychologist at the NYU Stern School of Business, where she is an expert researcher in the psychology of good people. In 2018, she delivered the popular TED Talk “How to let go of being a ‘good’ person and become a better person.” She is the author of A More Just Future and The Person You Mean to Be.

Below, Dolly shares 5 key insights from her new book, A More Just Future: Psychological Tools for Reckoning with Our Past and Driving Social Change. Listen to the audio version—read by Dolly herself—in the Next Big Idea App.

Like millions of others growing up, I was a big fan of The Little House on the Prairie books. Once I had my own kids, I couldn’t wait to share the books with them. In fact, I spent a whole year reading all eight books, hundreds and hundreds of pages, to my kids every night. They loved hearing about growing up on a prairie as part of a hardworking American family that dealt with difficult circumstances while overcoming obstacles together. My husband and I even took our kids on a family vacation driving through South Dakota and Minnesota, going to the places where the Ingalls family lived at the time.

Over time though, as the little, nudgy questions in my brain began, I looked at the prairie wondering what happened to the indigenous people who lived on that land. I remember not knowing how to think about it and feeling emotionally thrown off by it. At the time, I chose not to bring it up with my kids.

Looking back ten years later, I realize that I didn’t share the full story of that family. While initially it seemed like my kids were learning a lot, this learning was setting them up to have to unlearn so much down the road. Many of the historical narratives we have about the United States have the element of being a partial or whitewashed history, requiring the need to unlearn in order to learn moving forward.

The hard part of unlearning is not the intellectual work, as there are great resources available to parents now that aid in that aspect of unlearning. The emotional work, however, deals with feelings like shame, disbelief, anger or guilt, which require more psychological tools than are readily available.

The Patriot’s Dilemma captures a phenomenon that the more we love our country, the less motivated we are to do the necessary work to improve it. The dilemma sits in the fact that the deep love we have for our country makes it tougher for us to push aside our rose-colored lenses to see the country more fully.

“The more we identify with heroes from the past, either our forefathers or the Ingalls family, the more threatened we feel by behavior that’s sub-heroic.”

The more pride we take in our ancestors, the harder it is for us to tell their full stories, both their successes and their shortcomings. The more we identify with heroes from the past, either our forefathers or the Ingalls family, the more threatened we feel by behavior that’s sub-heroic.

A personal story of the Patriot’s Dilemma comes from Megan Layton, a personal trainer. Megan came from a family that made a habit of sitting around the kitchen table after school and talking about what they learned in history class. Her family shared a deep patriotism and love-of-country.

Upon graduating from high school, however, her sources of learning U.S. history broadened. Over the years, through college courses, social media accounts, and her own active reading, she started to realize there were ways in which she wasn’t seeing all aspects of American history. She realized that perhaps she missed the connection of slavery and segregation to today’s racial disparities. She found that those connections had been more difficult to see because of the love-of-country that she felt so dearly. She captured this by saying “It’s like all we know is America’s greatest hits.” Her goal since then has been to push past the Patriot’s Dilemma, to retain that love of country, without falling into the trap of not seeing the country’s full history.

Many of us are wired for consistency. Our brains really like to put things together, to straighten that crooked picture on the wall, to see the clean narrative between A to B to C. In general, human beings don’t like to sit with contradiction. We want to resolve contradiction like a puzzle. A paradox of conflicting, true statements challenges us to be intentional in how we mentally process that contradiction.

There is a lot of paradox in our country’s past. For example, our forefathers had extraordinary vision, wrote extraordinary documents, defied extraordinary odds to build this democracy founded on principles of liberty, justice, and equality. Many of those forefathers, while also doing those extraordinary things, were enslaving human beings, separating children from their parents, and torturing and violently pursuing people who tried to free themselves. Both of those things are true. While saying it out loud can be uncomfortable, that exemplifies the paradox of well-documented, conflicting true statements.

“The key is to stop looking for the missing puzzle piece and accept that the puzzle is unsolvable.”

Wendy Smith, Marianne Lewis, and other paradox scholars have done research that shows that embracing a paradox mindset opens up tremendous possibilities for us. It makes us more resilient. It makes us more creative. The key is to stop looking for the missing puzzle piece and accept that the puzzle is unsolvable.

A great example of this comes from Mayor Mitch Landrieu, former mayor of New Orleans just after Hurricane Katrina. During an interview, I wanted to talk to him about bringing down the confederate monuments that sat on public spaces in New Orleans. When I spoke with him by phone, though, I was surprised at how the conversation just kept circling back to building the city up again. At one point, I expressed my confusion, “I thought we were going to talk about tearing down the monuments and you keep talking about building things. Help me understand how you’re thinking about this.” Without missing a beat, he said, “Most of life, we live inside a contradiction.” His answer demonstrated that he was already embracing the paradox mindset.

When we’re able to embrace the paradox mindset, we are able to reckon with the whitewashed history and emotions that arise when we come across those paradoxes. We are able to push past it and stay with the unlearning-and-learning process, rather than abandoning what seems like an unsolvable puzzle.

Fact: Anne Frank, Dr. Martin Luther King Jr., and Barbara Walters would all be the same age right now if Anne Frank and Dr. King were still alive. All three people were born in 1929. It seems, in our heads, that the Holocaust was a long time ago. It may also seem like the Civil Rights Movement was a long time ago. Yet, chronologically, we can see that both of those things occurred within Barbara Walter’s lifetime. Barbara Walters is still alive, of course, and only until recently a host of The View.

When we look at these historic events as “a long time ago,” it makes it harder for us to connect the dots between what happened in the past and what happens in the present. In fact, psychology research suggests that we tend to look at things in the past almost blurrier than we look at things in the future. That can be the case even if the length of time from the present is the same. We tend to blame victims of things that happened in the past more than we blame a victim of the same thing potentially happening in the future. In other words, our brain has what Eugene Caruso and colleagues call wrinkles in time. We view the past and the future differently, so things that happened in the past really seem like a long time ago. Why does this matter? It makes it tougher for us to connect the dots between things that already happened and how they show up in our lives today.

“Knowing a little bit about what happened yesterday makes it easier to understand what’s happening today.”

How can we get better at connecting those dots? What can we look for? How can we recognize the patterns in which speech replicates, thought replicates, systems replicate, trauma replicates from the past into the present? How can we making “a long time ago” feel like a current, relevant thing in our daily lives today?

Psychologists Phia Salter and her colleagues have done work that shows that giving people a small amount of historical knowledge increases their ability to recognize systemic racism in the present. In other words, knowing a little bit about what happened yesterday makes it easier to understand what’s happening today. Therefore, it is important to connect the dots and not let that long-time-ago illusion overtake us.

The idea of gritty patriots comes from an interview with George Takei, from the original cast of Star Trek. He currently boasts massive social media presence and millions of followers, all while remaining relevant as a celebrity five decades after first becoming famous. George and his family were incarcerated in Japanese American internment camps during World War II. They were American citizens, but like 120,000 other Japanese Americans, they were taken from their homes, forced to leave their jobs and their roots, while Japan and the U.S. were at war. They were taken many States away, kept behind barbed wires guarded by men holding guns. They were imprisoned for crimes they had yet to commit or that they might someday commit.

George still has vivid memories 80 years later of living in those internment camps. As an adult, he speaks with love of the United States, despite his government-sanctioned imprisonment as a child. He also speaks with disappointment in how unfairly his own country treated him and his family.

He has since made it his mission to educate Americans about the reality of those internment camps. In doing this, he’s exemplified the idea of being a gritty patriot, someone who loves their country but does so with grit. Angela Duckworth, psychologist at the University of Pennsylvania defines grit as, “passion and perseverance in pursuit of a meaningful long-term goal.” In this case, it is our love-of-country, it’s making our country better. Our grit is the agentic intentional actions we take to pursue that goal, as opposed to the entitlement of easily loving our country regardless of its past. George shows us what it means to be a gritty patriot, loving our country while having the grit to make it better, even when it lets us down.

To listen to the audio version read by author Dolly Chugh, download the Next Big Idea App today: