Did That Just Happen?!: Beyond “Diversity”—Creating Sustainable and Inclusive Organizations 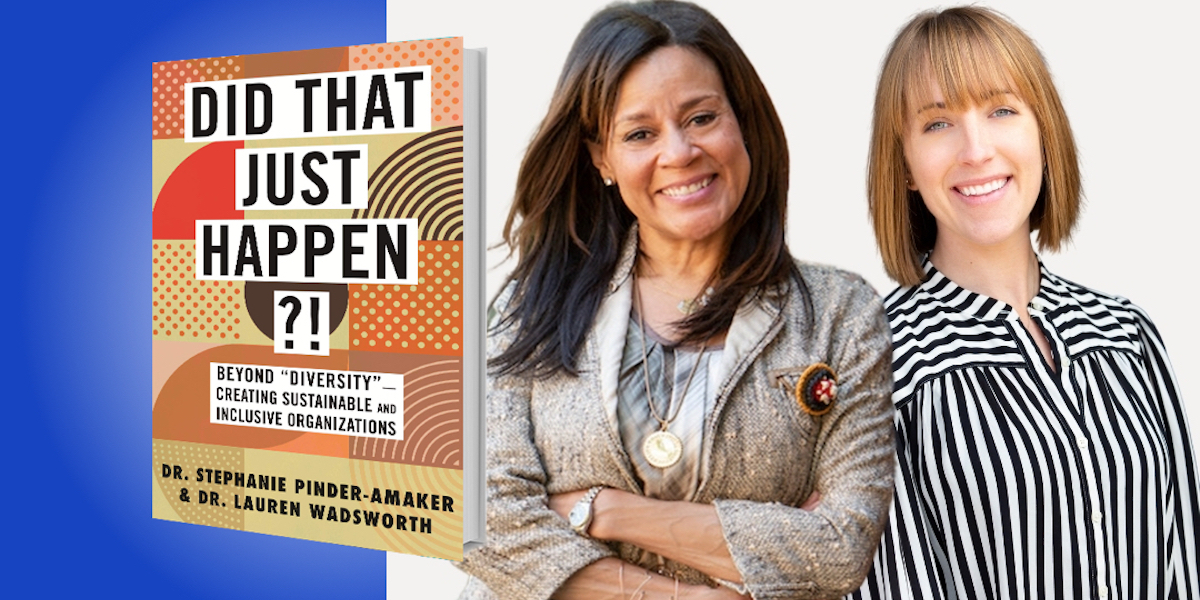 Below, Stephanie and Lauren share 5 key insights from their new book, Did That Just Happen?!: Beyond “Diversity”―Creating Sustainable and Inclusive Organizations (available now from Amazon). Listen to the audio version—read by Stephanie and Lauren themselves—in the Next Big Idea App.

You may be familiar with the term “microaggressions,” which refers to indirect, subtle, or unintended everyday slights, insults, and discrimination against members of a marginalized group. Perhaps you’ve been on the receiving end of statements like, “You’re so pretty for a dark-skinned girl,” or “You’re really articulate for an immigrant,” or “I wouldn’t have ever guessed you were trans.” There is nothing “micro” about the impact of these statements—they hurt.

So we propose a shift from the term “microaggressions” to “identity-related aggressions.” We’ve eliminated the “micro” to emphasize impact versus intent. We’ve included “identity” to underscore that these insults occur across all rising identities, including race, ethnicity, national origin, gender identity, sexual orientation, and so on. And lastly, we like that the acronym for identity-related aggressions is IRA. Just like the finance term “IRA,” this reminds us of the cumulative impact and compounding effect that these everyday insults have on an individual over time.

“Companies must improve the education and ability of your current staff to grapple with identity-related issues before welcoming in new folks.”

Listening in an empowering way in situations related to identity, while suppressing oppressive listening behaviors, is critical for fostering a culture of inclusivity. Ironically, oppressive listening behaviors are what many of us are rewarded for in the workplace. See if they sound familiar: Do you appear authoritative and confident—like you know how to fix any problem? Do you have a commanding presence such that you take up all or most of the space in meetings, and do most of the talking when trouble-shooting? These can be effective leadership skills, but context matters. Therefore, when colleagues come forward to report experiences of bias, marginalization, or racism, these listening behaviors can have a harmful effect on the speaker. These behaviors shut down conversation, and every time that happens, we’ve lost an opportunity to promote inclusivity.

On the other hand, empowering listening looks like this: We validate. We seek to understand and learn more. We name racism, bias, and marginalization. We clearly acknowledge that these things aren’t acceptable in our organizations. We commit to change, and if we are in leadership roles, we take responsibility for making that change. Notably, the empowering listener doesn’t ask the speaker to solve the problem, put them in charge of the effort, or assume they have the expertise or desire to take up the fight. And the empowering listener doesn’t shift the focus to themselves by sharing how they “get it” because of their personal experiences.

When we’ve messed up, we must be sure to apologize in a way that does not cause further harm. Imagine you’ve just used the wrong pronouns when referring to a colleague that uses they/them pronouns. You might feel horrible about it, embarrassed, and desperate for reassurance that your colleague doesn’t think you’re a terrible person. You may have the urge to burst into a soliloquy about how you are “so so so sorry,” that it’s so hard to use the pronoun “they” since you don’t think it’s grammatically correct. You might look at your colleague with big puppy dog eyes, saying “I hope you can forgive me—I’m really just so sorry.” Over the course of those cringeworthy minutes, you’ve misgendered someone, taken the emotional stage, made yourself the focus, and enlisted your colleague to take care of your emotions. Instead, apologize quickly, and move on quickly. For example, “Oops, I meant ‘they,’ sorry Blake. So, Blake had a great idea for the new ad we’re developing…” Quickly identifying your mistake, saying you’re sorry, and moving on is a non-oppressive way to apologize.

“We’re not able to simply label ourselves as “anti-racist”—in each moment, we must ask ourselves how we could act anti-racist.”

4. Don’t Put the Cart Before the Horse

The world is teeming with organizations that want to have a more diverse staff, but we often see companies try to put the cart before the horse. For example, they might create a website that presents their organization as more diverse than it is using stock photos, hoping to attract new BIPOC employees. They might rush into hiring new BIPOC employees, or put out advertisements and statements expressing their commitment to justice. These efforts, while well intentioned, can have a Venus flytrap effect, welcoming folks with historically marginalized identities into a space that is largely white, cisgender, straight, able-bodied, and unpracticed at considering identities in the workplace. The organization could then cause harm to new employees, tokenizing them while they endure countless identity-related aggressions, asking them to teach white employees how to be better. Instead, companies must improve the education and ability of your current staff to grapple with identity-related issues before welcoming in new folks.

We love Dr. Ibram X. Kendi’s description of being “anti-racist” as an action, as opposed to an identity. We’re not able to simply label ourselves as “anti-racist”—in each moment, we must ask ourselves how we could act anti-racist. And we seek to take these theories beyond the scope of race, to include other identities like gender and sexual orientation. We encourage folks to think about how they can act anti-“ist” in service of trans people, women, folks with disabilities, those struggling financially, those who are BIPOC, immigrants, refugees, those who are experiencing ageism or struggling with mental health, those who are marginalized due to religious affiliation, sexual orientation, indigenous heritage, and so on. It might feel overwhelming, but remember: We just have to engage in mindful awareness, and take it moment by moment.

To listen to the audio version read by Stephanie Pinder-Amaker and Lauren Wadsworth, download the Next Big Idea App today: