Language vs. Reality: Why Language Is Good for Lawyers and Bad for Scientists 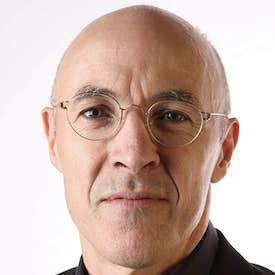 Nick Enfield is a professor and the chair of linguistics at the University of Sydney. He is also a research associate in the Language and Cognition Group at the Max Planck Institute.

Below, Nick shares 5 key insights from his new book, Language vs. Reality: Why Language Is Good for Lawyers and Bad for Scientists. Listen to the audio version—read by Nick himself—in the Next Big Idea App.

1. Your words can overwrite your own experiences.

Imagine you’re in a convenience store with a friend, and you witness a robbery. The police ask you to describe the perpetrator’s face as carefully as you can, but they don’t interview your friend. The next day, the police show both of you photographs of faces and ask you to identify the one you saw. Well, it turns out that because you described the face in words, you will be less accurate than your friend at correctly identifying the face. This is because you effectively rewrote the original experience in your own mind, but because your friend didn’t talk about the experience, their visual impression was left intact.

This is called the overshadowing effect, and experiments show that it not only affects our memories for faces, but also for accidents, colors, images, household objects, and even the tastes of different wines. This feature of language has the advantage of economy—it’s easier to remember a simplified version of an experience. Most of the time, we aren’t trying to capture or communicate very fine details in our words. A simplified rendition of reality is easier to convey, just as it’s easier to reproduce an image from someone’s line drawing than from a photograph.

But a downside is that we’re hardly aware of these effects. Language for humans is like water for fish—it’s everywhere, but we hardly see it, and that creates an exploitable vulnerability.

2. Language is a stealth technology for influencing people.

Every time you hear or read a description, you are allowing someone else to dictate your perspective on a scene. Their words direct your attention to certain aspects, and away from others. You are allowing them to frame how you understand it, and to affect how you reason about it. Language can be used to weaponize the overshadowing effect.

“People’s beliefs about reality were overshadowed by the words used to describe it.”

In a psychology study from the early 1930s, people were shown simple line drawings, and their task was to remember what they saw. Later, they were asked to draw the images from memory. The trick was that these drawings were ambiguous, and the experimenters put different labels on the drawings for different people. For example, one image was a hybrid between a crescent moon and the letter C. When the people who saw the label “crescent moon” were later asked to draw the image as accurately as they could from memory, they would draw something more like a crescent moon than the original. Those who saw the exact same image but with the label “letter C” would later draw it more like a C, even though their task was to reproduce the visual image exactly. People’s beliefs about reality were overshadowed by the words used to describe it.

This is happening every time you hear, see, or read something described in words. The reality being described is reshaped by language, and your mind now holds the reshaped version, not the reality. Because language is a constant presence, we take it for granted, and don’t realize the degree to which language shapes the world we believe we’re living in. And most of the time, that shaping is done by words that other people choose for us.

3. Language is a gift for lawyers.

When I use the term “lawyers,” it is shorthand for anybody in the business of persuasion: actual lawyers, politicians, advertisers, social media influencers. The phenomenon of strategic wording is second nature to all of us when it comes to defending a position—even young kids are masters at this.

For example, two young kids are playing with blocks, and the structure they’re building crashes down. When an adult admonishes them, one kid says, “She poked it!” The other says, “I tapped it!” We could argue as to whether poke or tap was a more accurate description of the event, but the issue is accountability. Who was at fault? The answer depends on which verbal description is accepted.

“We tend to gravitate toward the description that supports the version of reality that we wish to defend.”

This effect has been demonstrated in experiments where people will assign different degrees of blame depending on differences in wording. Imagine an insurance case about a fire in a restaurant, which was caused by someone bumping a table and a candle toppled over. If you use more agentive language, as in “She toppled the candle,” people will assign greater blame to the person than if you use less agentive language, as in “She bumped the table, and the candle toppled.”

This principle of strategic wording fuels news and media commentary, where the same situation is described in radically different ways by different media outlets. We are all familiar with rioting versus protesting or terrorists versus freedom fighters, but the truth is that every statement takes one stance over all possible others, whether or not it’s intended to. And there’s often no way to settle which description is more accurate. We tend to gravitate toward the description that supports the version of reality that we wish to defend.

4. Language is bad for scientists.

Language makes truth-seeking hard. Physicists have argued for more than a century as to whether it is possible to know reality, or whether we only ever deal with our descriptions of it—where these descriptions are necessarily framed in words. The physicist David Deutsch said that languages are theories which are “invented and selected for their ability to solve problems.” As the physicist Sean Carroll says, our ways of talking are “an absolutely crucial part of how we apprehend reality.”

To build new knowledge about reality, and share that knowledge, we need words. But words are anything but objective. Different ways of framing a situation can nudge our thought processes in very different directions. Suppose I tell you that 600 people are hospitalized with a mysterious illness; your task is to decide between treatment options, but the trick is that I can describe the same option using different words. If I describe an option by saying “200 out of the 600 people will be saved,” you are far more likely to select that option than if I say “400 out of the 600 people will die”—even though these two wordings describe the exact same thing. Effects like these are a goldmine for lawyers, but they are a minefield for judges, scientists, and anyone else who just wants to know what is true. The problem is that language never presents things as they really are.

“Physicists have argued for more than a century as to whether it is possible to know reality, or whether we only ever deal with our descriptions of it.”

This can have ethical implications. When the animal scientist John Gluck began his career, his experiments caused the animals great pain and suffering. At the time, he used language that avoided any possibility of empathizing with the animals: the monkeys were said to be avoidant rather than frightened. They were not not hungry, but had a latency to consumption. In the middle of his career, Gluck abandoned his research because he no longer wanted to harm the animals, and he explained that the language he had learned as a scientist made it easier for him to commit the wrongs. He offered a warning: if you have to sanitize the language to describe what you are doing, in any aspect of life, “you have entered morally perilous territory.” This is why we need to handle language with a big dose of respect and humility, given the power it has to shape our world and our values.

5. Language can control us, but only if we let it.

Language has immense power. It directs our attention, it engages our emotions, and it messes with our memory and reasoning. In short, we’re putty in the hands of language.

Like all things of power, language can used for good or ill. The ill in language is destructive, or even exploitative: language can create all manner of deception, with much of it under the radar. But the good in language is very, very good: language is our social glue, it creates our worlds, and it is our most powerful tool for collective sense-making.

The more we learn about the power of human language—the degree to which it shapes our world and our thoughts with us hardly being aware—the more language demands respect and humility. A single language gives almost endless options for describing a situation in words. But each language is just one of 7,000 unique language systems spoken in the world today, and each of those languages provides its speaker with a unique library of ideas.

Indeed, there would be no big ideas without language.

To listen to the audio version read by author Nick Enfield, download the Next Big Idea App today: