Why Doing The Dishes Feels Like It Takes Forever 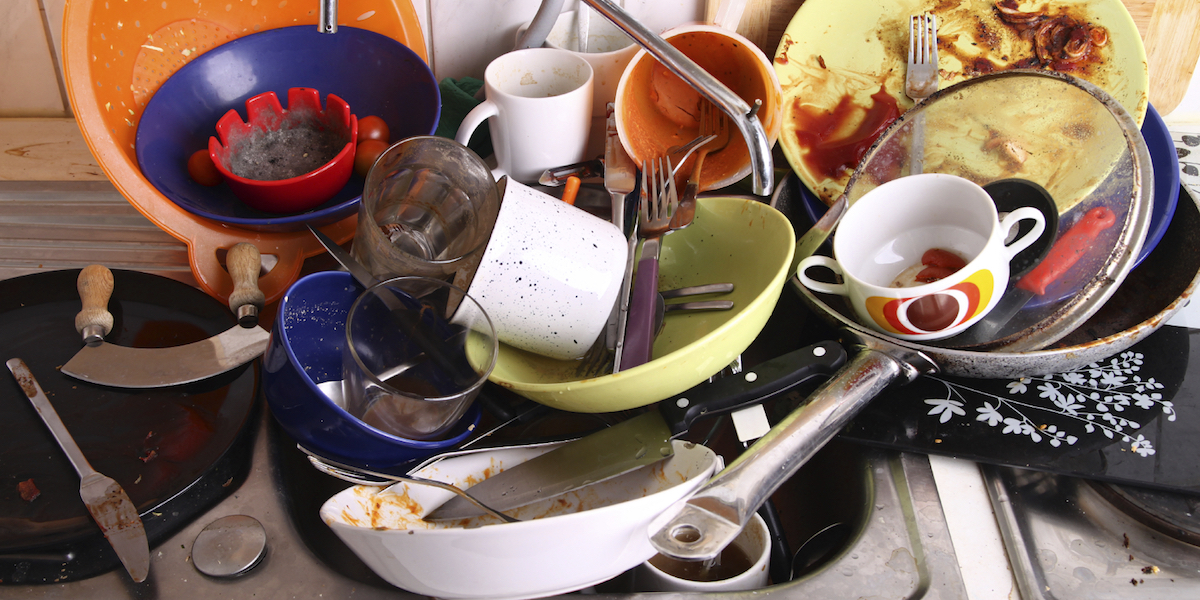 We all have some chore we profoundly dislike. For me, it’s all things related to dishes. I don’t like scrubbing them, and I don’t like emptying the dishwasher either. Oh, I know life is better than the days when, in one of my old magazines, an ad showed a woman with a stack of roughly 1000 dishes, and reported that this is how many she had to wash by hand each month.

Still, whenever we dislike something, we have a tendency to massively overestimate how much time it takes. I have timed myself, and I know I spend far less than an hour each week on dish-related chores (unless I’ve had a huge dinner party or something that involves fondue caked on to multiple pans). But because it happens in small spurts often, it feels like it takes more time than it does. I suspect this is why, in one 1998-1999 study, women estimated they spent 5.5 hours per week doing dishes, when their time diaries showed they spent 1.1.

So let’s say we hate doing dishes. What can be done about it? The usual 3-part rubric is to ignore, minimize or outsource it.

Ignore. An underutilized option, but you can always just let them pile up. Either they’ll stay piled up, or some other family member or household visitor will lose the game of kitchen chicken and do them.

Minimize. Another option is to use fewer dishes. Make one-pot meals. Don’t use serving dishes. Cook stuff that comes off easily. Use paper plates on occasion (and write a check to your favorite environmental charity as atonement). Or you could make it feel like the time is going faster by using some high-end Caldrea-type dish soap that smells so nice it’s like aromatherapy instead of a chore.

Outsource. This is harder to pull off in the usual sense of outsourcing, unless you have a housekeeper who’s there every day, which is far outside the realm of most of our experience. But I’m already working on making dish chores something my kids can do. This morning I decided to teach Jasper (who will be 4 in May) how to empty the silverware from the dishwasher. He was so excited to be a helper, and managed to do a reasonable job (the concept of turning all the forks the same way in the drawer will be taught another day, as will the difference between a soup spoon and a teaspoon, which I’m not sure I entirely grasp either). He also handed me the plates and bowls so I could put them in the cupboard, which meant I didn’t have to keep bending over. We’re still a few years from this being his chore, but hey, it’s a start!