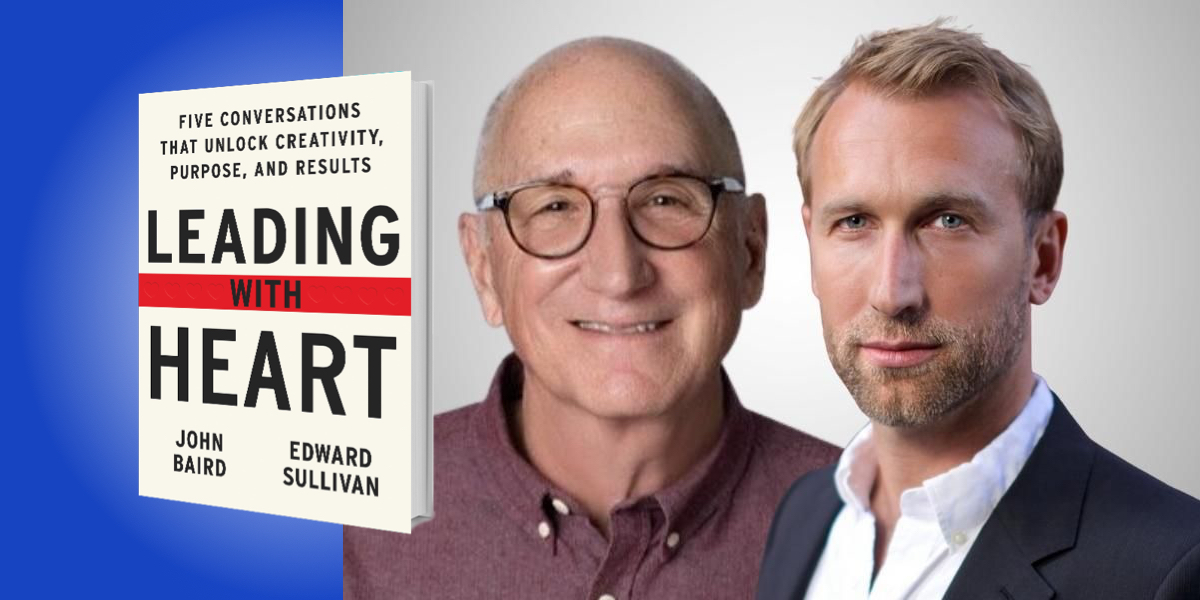 John Baird is an executive coach and the founder of several companies, including ExecutivEdge, Edgeman Coaching, and the Velocity Group, where he is currently chairman. He holds a PhD in organizational communication and has coached leaders of many Silicon Valley start-ups and Fortune 500 firms like Apple, Nike, and Twitter. Edward Sullivan is the CEO and managing partner at Velocity Group and has worked as both an executive coach and a global political consultant. He holds an MBA from the Wharton School and an MPA from the Harvard Kennedy School.

Below, John and Edward share 5 key insights from their new book, Leading with Heart: Five Conversations That Unlock Creativity, Purpose, and Results. Listen to the audio version—read by John and Edward themselves—in the Next Big Idea App.

1. Get curious about what people need.

Everyone wants to feel like they are doing the best work of their lives. But we all need different things to feel that way. And getting curious about what different people in your organization need is one of the primary focus areas of open-hearted leaders.

Now, you might say, “I have 150 employees, I can’t possibly do that for everyone in the company,” and you’d be right. Your job isn’t to do it for everyone—just for your team. And the leaders who work for you will do it for their direct reports, and so on. In that way, curiosity around what people really need to feel creative, resourceful, and empowered will cascade down through the organization.

When faced with economically challenging times, it’s easy to think throwing more money at people will make them feel safe and committed to the company. While more money is always nice, it’s normally not the core driver of loyalty and retention. Being treated and appreciated as a human being is. And you don’t need any extra budget to do that. Just the willingness to lead with heart, which begins with showing genuine curiosity about what your people need to do the best work of their careers.

People who lead with heart are able to be transparent about their fears, which allows them to be curious and not reactive. Once, while coaching a CEO, I sat in on some of his team meetings. They went poorly—with little actual engagement or listening. The CEO was judgmental, shutting down ideas that his team expressed.

“People who lead with heart are able to be transparent about their fears, which allows them to be curious and not reactive.”

I then had a difficult conversation with the CEO, trying to get to the bottom of his behavior. Was there some fear underlying his tendency to talk over and dominate the members of his team? He eventually opened up to me, talking about his family, and an underlying fear of being judged incompetent by his father. This fear, he admitted, made him always want to be seen as the smartest person in the room.

By naming this fear he was able to start working on it, and practice being more curious and validating with his team members. The dynamic of his meetings changed completely, with people opening up, sharing ideas, and admitting their own fears. His staff, which suffered from low morale and high turnover, became much more engaged and the business thrived as a result.

With the stock market in turmoil and economists using the dreaded “r-word,” fear is starting to creep into the American workplace again. And once again, managers are striving to keep their teams intact and high-performing in spite of all the uncertainty.

Some leaders will say you should “never let them see you sweat.” They will put on a smile and tell everyone that everything is going to be OK, that there’s nothing to fear. But according to the research, those leaders are likely to lose the trust of their teams and unknowingly encourage unhealthy or toxic behaviors. These unhealthy behaviors can spiral out of control and impact bottom-line results.

In contrast, leaders who normalize fear in the workplace by encouraging their employees to talk about what emotions are coming up for them are much more likely to move their employees out of the paralysis that fear can create and get them mobilized around a common goal.

“As the leader, you must own the fact that uncertainty in the markets creates a tinge of fear inside you, and that it is normal for anyone to feel a little fear right now.”

The conversation about fear starts at the top. As the leader, you must own the fact that uncertainty in the markets creates a tinge of fear inside you, and that it is normal for anyone to feel a little fear right now. Telling your teams what keeps you up at night humanizes you and normalizes their experiences. When leaders share their fears, it gives permission to others to share their fears. Knowing that what they are feeling is OK to share openly without fear of being judged will make your team feel safe. In that way, just talking about fear makes it go away.

When fear is bottled up, however, it builds. When people feel alone in their fear they are likely to get triggered into one of the common fear responses: fight, flight, or freeze. They might isolate, remain quiet in meetings, or stop sharing creative ideas. Or, they could start getting political and territorial, picking fights with colleagues or hoarding resources and information.

These sorts of unhealthy behaviors are important signals that leaders must be on the lookout for. Unhealthy or toxic employee behavior is a reliable sign that people are starting to act out of fear. That’s when you know you should have circled the wagons and began the process of normalizing fear a few weeks before, but it’s never too late to start.

When faced with uncertainty, our first instinct is often to hide our fears. But our instincts can be wrong. Leaders who embrace their fears and talk with their teams about them are more likely to make their employees feel safe, creative, and committed to solving whatever problems the company may face. As counterintuitive as it may seem, it is only by having courageous conversations about our fears that we overcome them.

4. Create a climate of safety and trust.

Jon Rubinstein is an engineer who was a top executive at Apple, leading teams responsible for the original iPod, among other products. But his team was not really working as a team. Jon was frustrated because everybody was coming to him, rather than one another. It was not a climate where people felt like they could actually have real conversations with each other.

“They talked about what was working in their relationship, what was not working, and how they could support each other better.”

As executive coaches working with Jon, we designed an exercise we called “speed dating.” We brought team members together and over a two-hour period we had them have quick, one-on-one conversations with one another. The conversations were brief but critical. They talked about what was working in their relationship, what was not working, and how they could support each other better.

Once the conversations were finished, we brought them all back together to discuss how it went. What did they talk about? How could the team work better? What could they do as individual leaders to be more effective in team-building and collaboration?

Jon Rubinstein credits this exercise as a pivotal moment for him, his team, and for Apple more broadly. By creating a climate of trust and safety, co-workers were able to work as a true team.

Manny had a problem. He was the CEO of a high-flying startup that was doing very well, but he noticed problems with how his team was working. Outside of meetings, they were not speaking well about each other. They were pointing fingers; they were not getting along. Decision-making had slowed to a crawl. Something needed to change.

Manny came up with the idea of starting meetings with “gratitude moments,” in which team members were asked to express appreciation for one another. These were moments of positive, constructive feedback, and Manny found that they had an enormous impact on the way his team collaborated. This simple act helped end finger-pointing, speed decision-making, and vastly improved morale.

To listen to the audio version read by co-authors John Baird and Edward Sullivan, download the Next Big Idea App today: