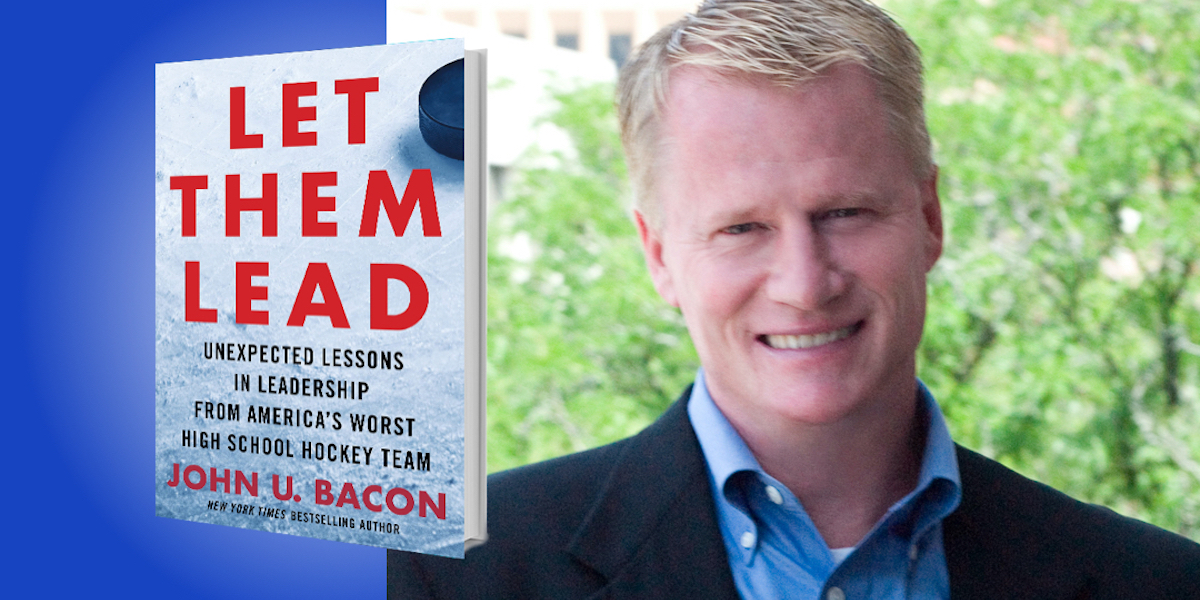 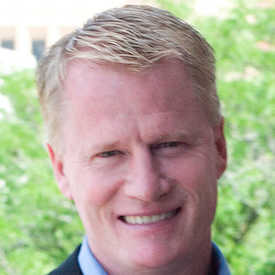 John U. Bacon has written for the Wall Street Journal, the New York Times, the Washington Post, Sports Illustrated, ESPN, and NPR, among others. He has authored seven national bestsellers on sports, business, health, and history. A popular corporate speaker, executive coach, and leadership consultant, Bacon lives in Ann Arbor with his wife and son.

Below, John shares 5 key insights from his new book, Let Them Lead: Unexpected Lessons in Leadership from America’s Worst High School Hockey Team. Listen to the audio version—read by John himself—in the Next Big Idea App.

1. Make sure you’re the dumbest guy in the room.

In 2000, the ice hockey team at my alma mater in Ann Arbor, Michigan, the Huron High School River Rats, finished with a 0-22-3 record. The guy they then picked to lead them, yours truly, had never been a head hockey coach before, and I also happened to hold the record for the most games in a Huron uniform, 86, with the fewest goals: zero. So, we had a team with zero wins, led by a coach who scored zero goals.

But it worked! I ignored conventional wisdom every chance I had, and we proved the critics wrong on a daily basis. So how did we do it, and what did I learn in the process?

Well, the first thing you need to do is get help. Many leaders think they have to be invincible know-it-alls, but those leaders often don’t make it. Nobody can lead by themselves, and the more help you get, the better off you and your team will be.

On our staff, we had guys who had played college hockey, pro hockey, and even hockey in Sweden. At our first team meeting, I told the parents, “My goal was to be the dumbest guy in the coaches’ room—and I greatly exceeded my expectations.” I didn’t do it by interviews and résumés; I did it by trying them out. And you can too! Hire slower, and fire faster, if you have to.

“If two leaders always agree, one of them is unnecessary.”

I also hired people who were loyal, but strong enough to disagree. As gum magnate William Wrigley Jr. said, “If two leaders always agree, one of them is unnecessary.” Too often leaders confuse loyalty with blind obedience, and they value it so highly because they don’t want to be challenged. Sign that pact and you may get peace, but you’ll never get real success.

So remember, don’t be afraid to be the dumbest person in the room. In fact, make it your goal.

2. Make it special to join your team.

When I got the job, the first thing I did was call my mentor, Culver Academy’s Al Clark, who retired in 2015 with the most wins of any high school coach in the country. He told me, “You need to make it special to play for Huron. And the best way to make it special is to make it hard.”

Clark had a point. The Peace Corps takes about one in six applicants, and the Navy SEALS accept a mere 6 percent. Those jobs don’t pay much, either, but the people who apply are attracted to the difficulty of those jobs. That’s the point. So you need to make the people on your team feel like they had to do something hard just to make the team, something that not everybody would be willing to do. That way, just making the team means they’ve accomplished something. And once that culture is established, it’s easy to maintain because your people, with a little guidance, will do it for you.

At our very first summer workout, I told our players, “We are going to be the hardest-working high school hockey team in the state. Our goal is nothing less than winning the state title. It won’t be this year, but the team that does it will invite you back to their banquet, and give you a standing ovation.” They thought I was crazy, but they kept coming. That’s how starved they were for a sense of purpose.

So one week after school got out, we were in the weight room and the track three days a week, every week, for four months—before our season even started. And get this: Not one player quit. In fact, people from other sports started coming down to see if they could survive our grueling workouts—and our guys smoked them.

“You need to make the people on your team feel like they had to do something hard just to make the team, something that not everybody would be willing to do.”

They were pumped up, except for one freshman, who groaned. Our captain, Mike Henry, turned to him and said, “Hey, you play for Huron, and it’s harder over here.” That was exactly what I’d been waiting to hear. I liked it so much that we put Mike’s phrase on a sign in our locker room. That’s what it looks like when your people begin to lead themselves—and that’s when things start getting fun.

We were still the worst team in America, so we couldn’t control the results of our games. But we could control our behaviors that went into those games. So we had only two rules: Work hard, and support your teammates.

We won our first three games, the most we had the previous two years combined. But then we played Trenton, who had 14 state titles. They crushed us 13-2. When we got to the locker room, our guys were throwing their sticks and gloves around—angry, hurt, embarrassed. As soon as I walked in, I said, “Hey, I saw the game. 13-2. Can’t spin it. But that doesn’t matter. What matters are the two rules of Huron hockey.” They yelled back, “Work hard and support your teammates!”

“That’s right,” I said. “And you did both. We keep that up, and we’ll turn this around. We’re going to play Trenton again, and it ain’t gonna be 13 to 2.” They walked out with their heads held high. Following our two principles allowed us to define ourselves, instead of letting the world do it for us.

“By emphasizing our internal behavior, and not the external results, we could focus on what we sent out into the world, and not on what came back.”

We finished that first season with 7 wins, the most-improved team in school history. But that’s not the point—by emphasizing our internal behavior, and not the external results, we could focus on what we sent out into the world, and not on what came back.

4. Water all your plants, then watch who grows.

Leaders too often think their people are robots: They can do what they can do, they can’t do what they can’t do, and none of that will ever change. But the truth is that people can grow dramatically, and that includes leaders. Talent is not fixed, nor is maturity, grit, or leadership ability. So don’t try to predict who’s going to succeed, and who isn’t. Treat them all fairly, including the quiet ones. Water all your plants. Some will shoot right up, and others will lie dormant for years before sprouting—but they can all help your team.

And that brings us to Nate Reichwage, our third-string goalie, far behind our top two. Our second year, we had a good team, but our top two goalies were struggling. Even worse, we were about to play Grosse Pointe South, who in our last three meetings had beaten us 5-0, 7-2, and 7-0. As Nate recalls, he was “clearly the least-skilled goaltender on the team.” But he worked so hard that I was willing to give him a chance.

I still expected to get blown out that night—but Nate made save after save after save, looking like he’d been doing it his whole life. I have no idea what happened that night, but he then became our starting goalie. He earned the team’s Most Improved Player award, and the nickname Darth Nater.

At the end of our second year we played Trenton again—the same team that had crushed us 13-2 the year before. But this time it was a battle. Nate played great, and it came right down to the wire. We lost 3-2, but their fans gave our players a standing ovation.

We finished our second season with 16 wins, the second-best in school history. But we never would have gotten there without Nate Reichwage. Your people will do amazing things, too, if you just water all your plants, and watch who grows.

“Talent is not fixed, nor is maturity, grit, or leadership ability. So don’t try to predict who’s going to succeed, and who isn’t. ”

You can’t be the only leader on your team. Jon Cooper, coach of the two-time Stanley Cup Champion Tampa Bay Lightning said, “On bad teams, nobody leads. On good teams, leaders lead. On great teams, everybody leads.”

So how do you do it? Leading by example is clearly important. If you don’t, you’re a hypocrite, and they won’t follow you. But it’s not nearly enough—and that is why we created layers of leadership. The point is that everyone on your team can lead, whether they have a title or not.

Our ultimate objective was to get the players to run the team—and they did. They picked our team goals, not me, and for that reason, they were more inspired to achieve them. They even had a say in disciplinary issues, which made all of them accountable to each other, not just to me.

By our third season, we even let them coach an entire game by themselves. We had had a 14-game unbeaten streak, then suffered two tough losses. So I called up our captain, and told him that the seniors were going to coach the next game, start to finish, from picking the starting lineup to delivering the pregame speech to talking to the Ann Arbor News after the game.

Have no fear: The seniors coached a great game, beating a very good team 6-0. We finished our third season 17-4-5, the best in school history, with the same players who had not won a game three years earlier. We were ranked 53rd in the country, passing 95 percent of the nation’s teams. But at our senior banquet, the players didn’t talk about the victories. They talked about the values we stood for from the start.

This is why I don’t believe that people today are lazy, or sloppy, or selfish. They want discipline. They want direction. They want to be challenged. They want a sense of mission, purpose, and belonging. And they want to lead—so let them. If you give them these things, they will give you everything.

To listen to the audio version read by John U. Bacon, download the Next Big Idea App today: