Making Numbers Count: The Art and Science of Communicating Numbers 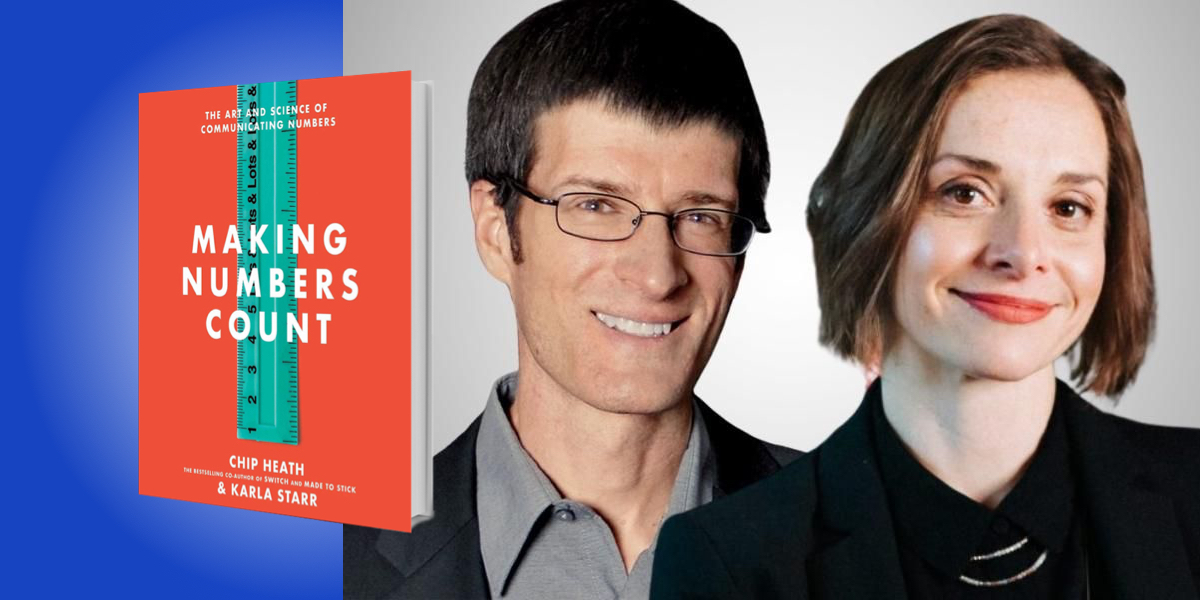 Chip Heath is a professor at Stanford Graduate School of Business. Chip and his brother Dan have written four New York Times bestselling books that have sold over three million copies worldwide, and have been translated into 33 languages. Karla Starr has written for O, The Oprah Magazine, The Atlantic, Slate, and Popular Science, and has appeared on CBS Sunday Morning. Her first book, Can You Learn to Be Lucky?, was named a Fast Company Best Book of the Year.

Below, Chip and Karla share 5 key insights from their new book, Making Numbers Count: The Art and Science of Communicating Numbers. Listen to the audio version—read by Karla herself—in the Next Big Idea App.

1. Numbers are a foreign language.

In fact, numbers are everyone’s second language, at best. We don’t always think of them as a foreign language because they’re served up right next to our own, native language. But they’re what’s known as “cognitive tools:” an abstract idea that helps us measure the world around us.

The problem? While our brain evolved to deal with concrete items right in front of our faces, numbers are a relatively recent invention. That’s why most cultures, throughout history, have only had words for 1, 2, 3, and “many.” No one thinks they’re a numbers person—and that’s because no one truly is a numbers person.

If your doctor started throwing around medical jargon you didn’t understand, you’d probably ask for clarification. But when a financial planner starts throwing around interest rates, we usually just shrug, feel embarrassed, and assume we’re bad at math. But it has nothing to do with how smart we are—just the fact that someone is discussing concepts in a second language. Understanding how our brain works, and that it’s fundamentally an issue of communication, can empower us to ask others to explain their points more clearly, and help us explain them better to others.

You’ve often seen this in documentaries—a unit of measurement like, “if you took that price, converted it to pennies, and then put all of the pennies into the Empire State Building, you could fill it up to the top floor!” Or, “this weighs as much as five and a half African elephants!” These are attempts to explain something that’s too big for us to wrap our heads around by discussing something even more abstract and mind-boggling.

“When was the last time you checked your bank balance and thought, ‘I can’t believe I spent that eight-inch stack of one-dollar bills’?”

When Ronald Reagan tried to explain the national debt in 1981, he said that “a trillion dollars would be a stack of thousand-dollar bills 67 miles high.” But when was the last time you checked your bank balance and thought, “I can’t believe I spent that eight-inch stack of one-dollar bills”? That’s just not how we think about money. Reagan could have explained that the national debt was $4,000 per person, but that doesn’t sound as impressive or scary.

“Wow-ism,” or “big-ism,” is the mistaken belief that when communicating numbers, bigger is better—and that making up an arbitrary metric is going to help our case. It’s a veiled attempt to relay a single message, one that makes it difficult to grasp the specifics: “Wow, that’s… big.”

So if you have a large number and need to clarify its size, what can you do? Counterintuitively, shrinking everything down can help.

For example, let’s start with a boring statistic: 97.5 percent of the world’s water is salinated. Of the 2.5 percent that’s fresh, over 99 percent is trapped in glaciers and snowfields. In total, only 0.25 percent of the water on the globe is actually drinkable by humans and animals.

By the end, your eyes have glazed over, right? So now let’s look at it another way: If you put all of the Earth’s water into a gallon jug, humans would only be able to drink the last few drops. Now that’s pretty startling. I saw that on TV for an Earth Day special when I was a kid, and I still remember it clearly.

Small sizes allow us to grasp an entire picture at once, clarifying ratios and comparisons. Presenting data so that it’s clear is often disregarded as being “dumbed down.” But when you see such a direct, straightforward example that stays with you while getting the point across, you realize: That’s not dumbed-down—that’s genius.

“Small sizes allow us to grasp an entire picture at once, clarifying ratios and comparisons.”

If I came up to you and gave you $20, you’d probably feel pretty happy. But how would you feel if you knew that I gave everyone else in the room $100?

Behavioral economists have spent decades exploring the impact of framing. What we ultimately think of a number is massively influenced by the way that it’s presented. Another way to use the concept of framing is with an idea called “construal level theory.” This concept explains the way our thoughts are affected by our mental distance from something. The closer something is to us—right here, right now—the sharper the picture becomes.

Even in the world of numbers, there are always two sides to every story: did you get 25 percent off, or did you pay 75 percent for something you don’t need? Is the infection rate going down, or is it still higher than anywhere else? So don’t be afraid to ask: what’s the other side of the story? What would this look like up close?

Bad statistics and numbers that try to fool people don’t pass the Instagram test. Anyone can look good from the right angle, with lots of filters. But if you want to know what someone really looks like—or what a number really means—look at lots of angles.

Using reference points that your audience will understand is a no-brainer for any message. But we often forget to do this when it comes to math and numbers.

“The first thing we want to do is employ the ‘MacGyver Principle’—to find reference points that your audience would understand. Look around you. Think locally.”

For example, how could you explain the size of Olympus Mons on Mars, the largest volcano in the Solar System? It’s about 300,000 square kilometers in area—but no one really knows what that means. Our brains evolved to deal with concrete objects, so when we’re translating numbers, the first thing we want to do is employ the “MacGyver Principle”—to find reference points that your audience would understand. Look around you. Think locally.

So how big is Olympus Mons? It’s the size of Arizona or Italy. How tall is it? It’s so tall that if you were on a cross-country flight, you’d crash into its halfway point.

Another quirky but effective example of this MacGyver Principle is social distancing guidelines from around the world: in France, it was two baguettes; in Canada, one hockey stick; in Australia, four koalas; in grocery stores, you had to stay two shopping carts away. Numbers are just ways of measuring and discussing the world, so don’t be afraid to have fun with them—make your numbers count.

To listen to the audio version read by co-author Karla Starr, download the Next Big Idea App today: