Masters of Scale: Surprising Truths from the World’s Most Successful Entrepreneurs 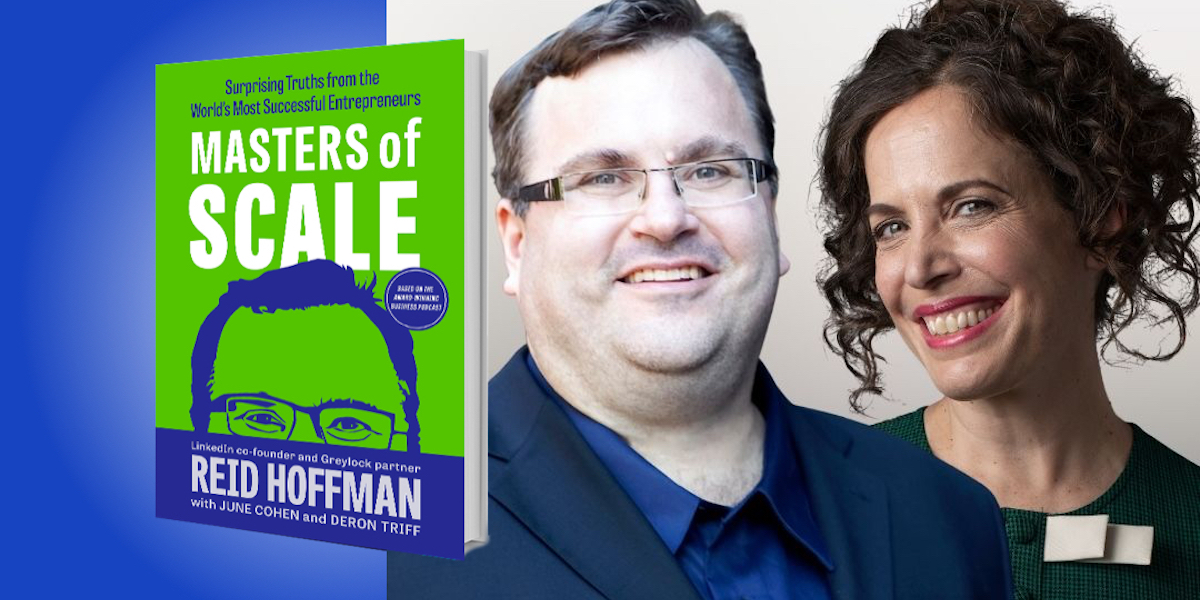 5Reid Hoffman is the co-founder of LinkedIn, a leading Silicon Valley investor, and the host of the award-winning podcast Masters of Scale, which is executive produced by June Cohen and Deron Triff.

Below, Reid and June share 5 key insights from their new book written with Deron, Masters of Scale: Surprising Truths from the World’s Most Successful Entrepreneurs. Listen to the audio version—read by Reid and June themselves—in the Next Big Idea App.

1. Don’t take no for an answer. Take it as an opening.

Every truly big idea, whether it’s in business, science, or the arts, has one thing in common. When it first reaches the world, it is universally met with a common reaction: No, I can’t see that … No, it will never work … Just no. The bigger the idea, the harder it is for people to see it. And the more you’ll hear the word no.

So when you’re hearing a lot of no’s, it may be a sign that you’re onto something big. Conventional wisdom will tell you not to take no for an answer. And we agree with that, but we’d urge you to take it one step farther and accept each no as a gift. If you listen closely to each no, you’ll learn how to make your idea stronger.

“If you’re not embarrassed by your first product, then you’ve released too late.”

Many of the habits that allowed you to achieve success in school won’t help you build a company. In fact, they get in the way. In school, we were taught to be careful, obedient, and perfect. But to launch a new product or idea, you must be willing to be imperfect.

In fact, imperfect is perfect—so long as you learn quickly from what works and what doesn’t.

If you’re not embarrassed by your first product, then you’ve released too late. You spent way too long getting the thing perfect in your own eyes, and you’ve missed out on getting feedback and making it better. This rings true for more than just product releases—it applies to companies and ideas, too. Sometimes you just need to make a move before you have everything figured out.

3. To bring a big idea to life, you must learn to unlearn.

“Every successful company, and most successful ideas in science and culture, change direction at least once along the way.”

Industries change, beliefs change, technologies change, you change. So to launch a big new idea in the white space where you can really make your mark, you have to not just learn, but unlearn. You need to actively set aside what you thought you knew, what made you successful last time, so you can see what you don’t know and go there.

In the world of Silicon Valley startups, we talk a lot about the pivot. It’s sometimes misunderstood as a last-ditch attempt to save a company that’s failing, but in truth, every successful company, and most successful ideas in science and culture, change direction at least once along the way. It’s just that these pivots are often left out of the heroic story we tell later. That’s why you have to plan to pivot—go into every project with not just a plan B, but multiple plans.

5. The culture of your company is a living thing.

Anyone building a company today knows that they’re not just building a product or a service, but also a culture that will support it over time. Whether it’s in an office, a classroom, or even a family, your culture is the context that lets every collaborator work at their best.

But culture isn’t static. It’s not written on stone tablets, and it’s not a box to check. Culture is a living, breathing thing. Culture is built by everyone over time. When you’re building a new world inside a company, what matters most early on is who you build it with—your first 50 hires. They are your cultural co-founders, so choose them wisely.

To listen to the audio version read by Reid Hoffman and June Cohen, download the Next Big Idea App today: