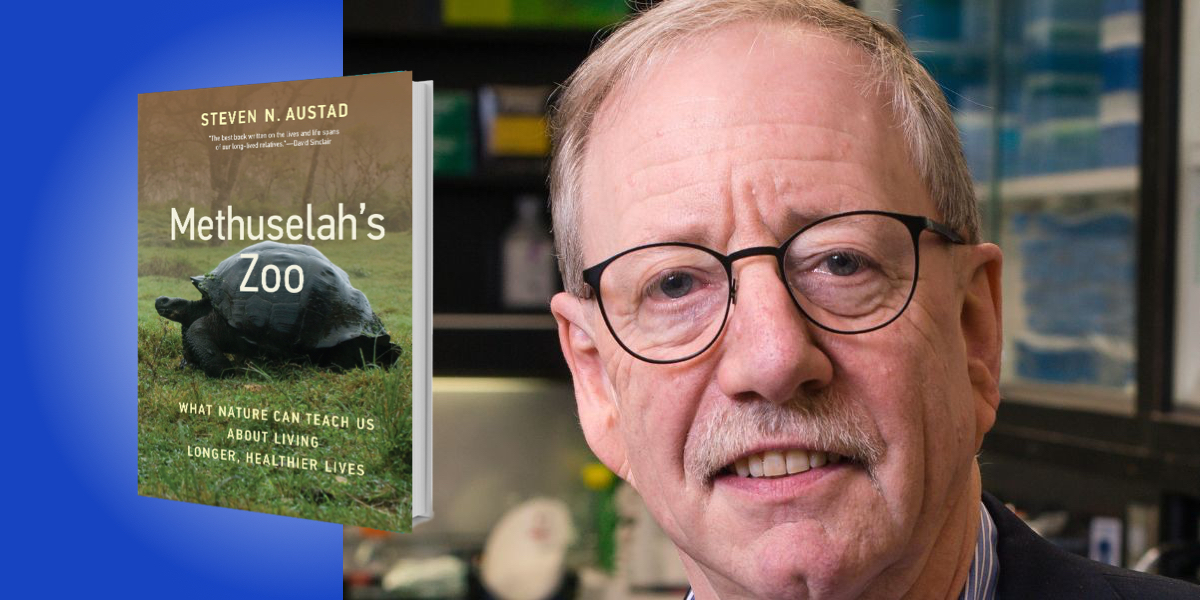 Steven Austad is a Distinguished Professor of Biology at University of Alabama at Birmingham. His background involves close interactions with many animal species both in captivity and natural environments. Before becoming a scientist, he trained wild animals for the movie industry.

Below, Steven shares 5 key insights from his new book, Methuselah’s Zoo: What Nature Can Teach Us about Living Longer, Healthier Lives. Listen to the audio version—read by Steven himself—in the Next Big Idea App. 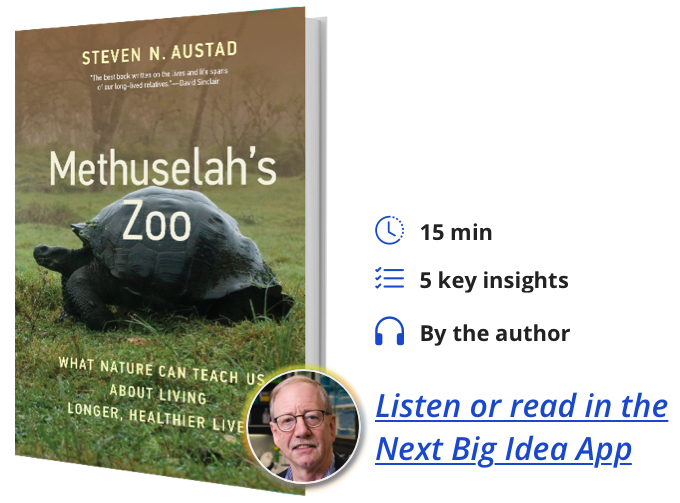 Just as fire produces side effects—sparks, soot, smoke—our cellular energy factories also do, by way of chemical by-products. Some of these by-products are oxygen radicals, which are destructive to the cellular energy factories themselves. To give an idea of the scale of damage, the DNA in each of our cells is estimated to be damaged by internal fire at least ten thousand times per day. Ten thousand bits of DNA damage per day times forty trillion cells and we are talking about numbers more familiar to astronomers than biologists. How do we survive for months, much less decades, in the face of such destruction?

2. Longevity is about replacement and repair.

Living things can almost be defined by their ability to self-repair. Wounds heal, breaks mend, and parts that can’t be repaired must be replaced. Longevity is about our success in repairing or replacing damaged cells.

“The DNA in each of our cells is estimated to be damaged by internal fire at least ten thousand times per day.”

Almost all daily DNA damage is repaired by the hundred or so genes that are devoted solely to that single task. Of course, terminally damaged cells have to be replaced. We replace about one percent of our cells per day—so roughly 400 billion cells, which corresponds to about two thousand miles of new DNA produced per second.

The fact that humans can successfully repair or replace damaged DNA (not to mention repairing or replacing other cell components) at that scale for decade after decade is remarkable.

3. Other species do longevity better.

For example, virtually any of our cells could suffer enough random DNA damage to turn cancerous. Cancer originates as the result of multiple mutations (mutations are unrepaired DNA damage) within a single cell. Human repair and replacement processes are successful enough for us to survive decades without one or more of our cells growing into a serious cancer. In light of our prevalent DNA damage, we are pretty remarkable. But consider that an elephant has more than sixty times as many cells as a human, and each of those cells also has the potential to become cancerous, yet elephants live almost as long as we do. That means elephants must have around sixty times better cancer resistance, meaning better repair or replacement processes. What’s more, whales can have as many cells as thirty elephants, or eighteen hundred times as many as a human, yet some whales live twice as long as humans. What might we learn about cancer prevention from understanding whale cells?

“Consider that an elephant has more than sixty times as many cells as a human, and each of those cells also has the potential to become cancerous, yet elephants live almost as long as we do.”

Take the heart, as another example. The human heart beats about 70-80 times per minute, or roughly one hundred thousand times per day. The heart is a muscle and muscles wear out with age. Since people are living longer than ever before, deaths and disabilities from heart failure are increasing. Let’s say that a human heart can continue beating for about one hundred years, with diminishing quality. A hummingbird, by comparison, has a machine gun of a heart. It beats more than a thousand times per minute. Over the course of a twelve-year life (the longest on record), a hummingbird’s heart will beat about twice as many times as a hundred-year-old human heart. Not only that, but the hummingbird heart can’t afford to have its heart function deteriorate because any drop in the heart’s ability to deliver fuel and oxygen to flight muscles would compromise its ability to forage and flee danger. To add to the mystery, hummingbirds do this with blood glucose concentrations that would be diabetic in a human. Few things are more damaging to the human heart than uncontrolled diabetes. What might we learn about maintaining heart health if we understood hummingbird hearts?

4. Size counts in the longevity game.

Large species typically live longer than small species. We know this intuitively. No one is surprised that a dog lives longer than a mouse, a horse longer than a dog, an elephant longer than a horse. This is a very general pattern in nature. Size and longevity are linked not only in mammals but the same pattern is found in birds, reptiles, salamanders, clams, and oysters—in just about everything. The reason is simple: the fire of life burns hotter and faster in smaller animals. A mouse’s cells burn energy fifteen times faster than a horse’s cells.

“The fire of life burns hotter and faster in smaller animals.”

Given this general pattern, there are striking exceptions to the size-longevity rule. Humans are one exception because we live about four-and-a-half times longer than other mammals of our size. We must have considerably better mammalian repair and replacement processes, but still, other species do it better. When factoring in size, the longest-lived mammals are bats. One bat species lives ten times as long in the wild as a mammal its size should live even in the well-fed comfort of a lab or zoo.

Brandt’s bat is tiny, weighing as much as a 25-cent coin, yet can live more than forty years in the wild. For comparison, a four-times bigger mouse lives only up to one year in the wild, or three years in the safety of a laboratory. A bat small enough to be mistaken for a large butterfly manages to avoid predators, survive famine, flood, disease, heat waves, and cold snaps decade after decade. To survive nature’s challenges, Brandt’s bats need to maintain stamina. Human athletes requiring strength, agility, or endurance never maintain their highest performance level for forty years. We may have a lot to learn about preserving strength and agility from this bat. Plus, to navigate they echolocate, and therefore loss of high-frequency hearing would be a death blow to a bat. Human high-frequency hearing deteriorates significantly by our twenties and is practically gone by our forties. How do bats maintain that hearing?

5. Nature is full of surprises.

You can stumble on animals with remarkable repair abilities which are relevant to human health in the most unexpected of places. For instance, I stumbled on an animal that may hold a clue to Alzheimer’s disease prevention—even though it doesn’t have a brain! Oh, and it can live more than 500 years so it may have more than one thing to teach us about longevity and health. This animal, a clam called an ocean quahog, appears to contain chemicals that may be able to prevent Alzheimer’s plaques from forming.

Nature is smarter than we are and by paying attention to the ways in which evolution has produced healthy aging across the animal kingdom, we might discover new ways to enhance and extend our own health.

To listen to the audio version read by author Steven Austad, download the Next Big Idea App today: