Mindreader: The New Science of Deciphering What People Really Think, What They Really Want, and Who They Really Are 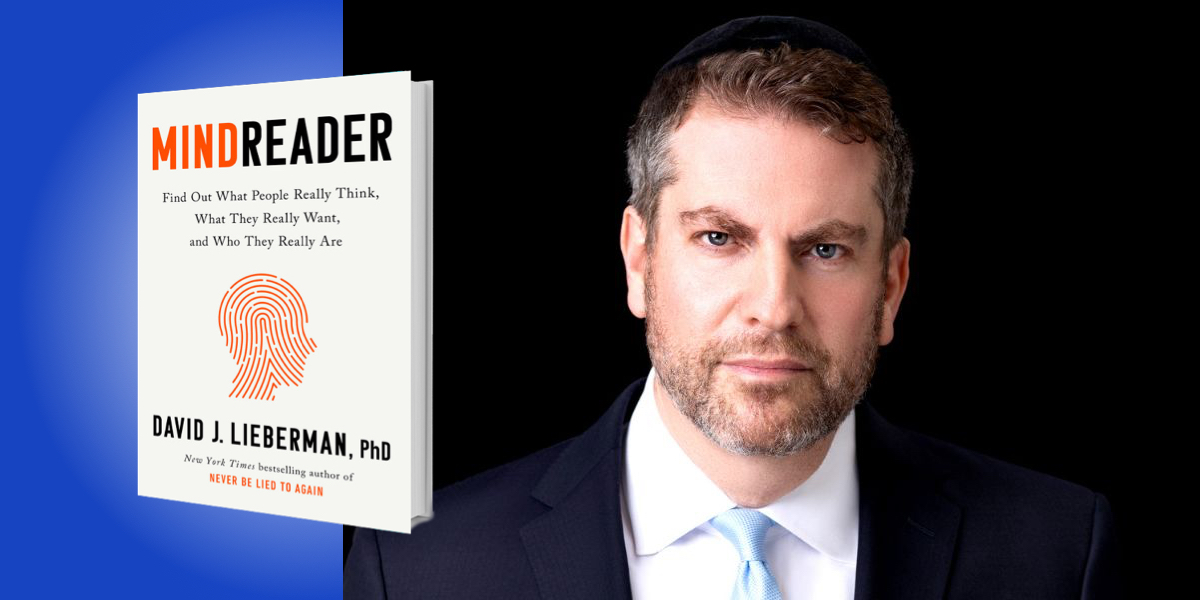 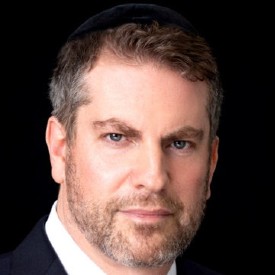 David Lieberman is a specialist in the field of human behavior and interpersonal relationships. He is a renowned psychotherapist and author of eleven books. He has trained personnel in the U.S. military, the FBI, the CIA, and the NSA, and his instructional video is mandatory for psychological operations graduates. He teaches government negotiators, mental health professionals, and Fortune 100 executives.

Below, David shares 5 key insights from his new book, Mindreader: The New Science of Deciphering What People Really Think, What They Really Want, and Who They Really Are. Listen to the audio version—read by David himself—in the Next Big Idea App. 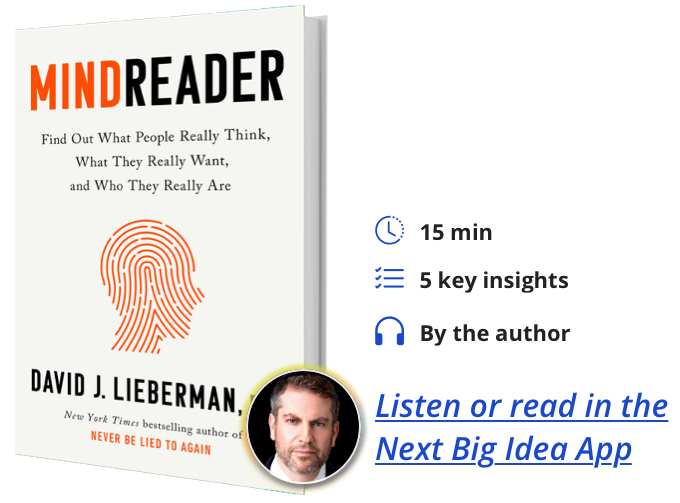 1. What they really think.

Paying close attention to both what people say and how they say it—language pattern and sentence structure—reveals what’s actually going on inside their heads. There are seven or eight different markers to consider.

One such marker is pronoun usage. From a psycholinguistic standpoint, pronouns can reveal whether someone is trying to separate themself from their words. In much the same way that an unsophisticated liar might look away because they are feeling guilt and eye contact increases intimacy, a person making an untrue statement often subconsciously distances from their own words. The personal pronouns (e.g., I, me, mine, and my) indicate that a person is committed to and confident about their statement. Omitting personal pronouns may signal someone’s reluctance to accept ownership of their words.

Let’s take the example of giving a compliment. A woman who believes what she’s saying is more likely to use a personal pronoun. For instance, “I really liked your presentation.” However, a person offering insincere flattery might say, “Nice presentation,” or “Looks like you did a lot of research.” In the second case, she has removed herself from the equation. Those in law enforcement are well acquainted with this principle and recognize when people are filing a false report about their car being stolen because they typically refer to it as “the car” or “that car” and not “my car” or “our car.” Of course, you can’t gauge honesty by a single sentence, and pronoun usage is only one of a dozen of different markers available to us.

Those in law enforcement know that victims of violent crimes, such as abduction or assault, rarely use the word we. Instead, they’ll relate the events in a way that separates them from the aggressor, referring to the attacker as “he” or “she” and themselves as “I.” Rather than saying, “We got into the car,” they are inclined to phrase it as, “He put me in the car.” Recounting a story that is peppered with we, us, and our may indicate psychological closeness and implies an association, a relationship, and perhaps even cooperation.

We can observe benign applications of this in everyday life. At the end of a date, Jack and Jill walk out of a restaurant, and Jill inquires, “Where did we park the car?” An innocent question, but using we, instead of you, indicates that she has begun to identify with Jack and sees them as a couple. Asking “Where is your car parked?” hardly implies disinterest, but turning your into our does expose a subtext of interest.

“The pronoun we is typically reserved for positive associations.”

Whenever I speak to couples, I’m always on the lookout when the word we is conspicuously absent from conversation. Research finds that married couples who use cooperative language (e.g., we, our, and us), more often than individualized language (e.g., I, me, and you) have lower divorce rates and report greater marital satisfaction. Studies also demonstrate a powerful correlation between such pronoun use and how couples respond to disagreements and crises, predicting whether they will team up and cooperate or become polarized and divided. The use of you-words (e.g., you, your, and yourself) may suggest unexpressed frustration or outright aggression. A person who says, “You need to figure this out,” conveys enmity and a me-versus-you mindset. However, “We need to figure this out,” indicates us-versus-the-problem, a presumption of shared responsibility and cooperation.

Again, a single, casual reference does not mean anything (and any of these statements might signal anger or frustration in the moment, not about the marriage itself), but a consistent pattern of syntax reveals everything.

The implications of syntax extend to the corporate arena. Research finds that firms where workers typically refer to their workplace as “the company” or “that company,” rather than “my company” or “our company,” and to coworkers mostly as “they” rather than “my coworkers,” are likely to have low morale and a high rate of turnover. Similarly, in sports a fair-weather fan can be spotted through language: When the fan’s team wins, they characteristically declare, “We won.” But when the team loses, it becomes, “They lost.” The pronoun we is typically reserved for positive associations.

3. The art of reading the bluff.

Sun Tzu, in The Art of War, neatly distills the bluff: “If able, appear unable; if active, appear inactive; if near, appear far; if far, appear near.”

When a person is bluffing, they are managing others’ impressions to convey the “right” effect and serve a personal agenda. Conversely, the authentic person is not interested in how they come across because they are unconcerned with their image. A deceptive counterpart focuses solely on others’ impressions and puts a great deal of effort into presenting a certain image. The latter person almost always goes too far.

A bluff occurs when someone is really against something but pretends to be for it—or vice versa. The person is trying to create a false impression to disguise their true intentions. Therein lies the key: People who bluff habitually overcompensate, so you can uncover a bluff instantly by noticing how someone tries to appear. Let’s take an example from the world of poker.

A card player bets heavily and raises the pot. Does he have the cards or simply guts? When a person is bluffing in a poker hand, he wants to show he is not timid. He might put his money in quickly. But if he does have a good hand, he may deliberate a bit, showing that he is not really sure about his hand. Poker professionals know that a bluffing person will give the impression of having a strong hand, while a person with a strong hand will imply that their hand is weak.

“People who bluff habitually overcompensate, so you can uncover a bluff instantly by noticing how someone tries to appear.”

When people feign confidence they manipulate how self-assured they appear because we equate confidence with calm. For instance, law enforcement professionals know that a suspect may yawn as if to show he is relaxed or even bored. If the person is sitting, they may slouch or stretch, covering more territory as if to demonstrate a feeling of ease. Or the suspect may busily pick lint off his slacks, trying to show he is preoccupied with something trivial and is clearly not worried about the charges. The only problem (for the guilty person) is that a wrongly accused person will be indignant and won’t try promoting the right image. Remember, people who bluff habitually overcompensate.

Imagine that a man woke up one morning insisting he was a zombie. His wife tried shaking him into reality, to no avail. She reached out to his mother, who also tried to snap him out of this delusion. Not knowing what else to do, they finally took him to a psychiatrist but the guy insisted to the doctor, as he had to both his wife and mother, that he does not have a problem. The psychiatrist said, “But I hear that you think that you’re a zombie.” The man said, “Doc I know I’m a zombie.” The psychiatrist asked if zombies bleed and the man said they don’t. So, the psychiatrist pricked the man’s finger and it bled. The man stared in amazement at his finger, blood trickling down, and looked up to say, “Well what do you know, zombies do bleed.”

The moral of the story is that people see themselves, others, and their world the way that they need to, in order to reconcile with their personal narrative—to make sense of themselves, their choices, and their lives.

The greater our ego, the more vulnerable we feel, and the greater our drive to predict and control our world. We then interpret the world to fit our narrative, rather than adjusting our worldview to fit reality. Essentially, we color the world so that we are untainted.

Building a psychological assessment begins with asking, Why do they need to see that which they are looking for in the first place?

5. Mirror, mirror on the wall.

Ralph Waldo Emerson wrote: “People do not seem to realize that their opinion of the world is also a confession of character.” This is a piercing insight into human nature. A person looks at the world as a reflection of themselves. If they see the world as corrupt, they feel on some level that they are corrupt. If they see honest working people, that is frequently how they see themselves. That’s why con artists are the first to accuse others of cheating.

“How someone treats you is a reflection of their own emotional health and says everything about them and nothing about you.”

The old saying, “What Susie says about Sally says more of Susie than of Sally,” has a strong psychological basis. Research finds that when you ask someone to rate the personality of another person—a close colleague, an acquaintance, or a friend—their response provides direct insight into their personality traits and emotional health. Indeed, findings show “a huge suite of negative personality traits are associated with viewing others negatively.” Specifically, the level of negativity the rater uses in describing the other person and “the simple tendency to see people negatively indicates a greater likelihood of depression and various personality disorders,” including narcissism and antisocial behavior. Similarly, seeing others in a positive light correlates with how happy, kindhearted, and emotionally stable a person is.

The less emotionally healthy a person is, the more they denigrate the world to accommodate their own insecurities. Hence, how someone treats you is a reflection of their own emotional health and says everything about them and nothing about you. We give love. We give respect. If someone doesn’t love themselves, what do you expect them to give back? The emotionally healthy person is true to themselves, nonjudgmental, and accepting of others.

Knowledge is not power. Knowledge is a tool. How it is wielded makes all of the difference. Real power is the responsible application of knowledge. Knowing what people really think and feel saves time, money, energy, and heartache. But it also positions you to better understand, help, and heal those who are in pain. The techniques in my book are to be used responsibly, to enlighten, empower, and inspire. They are designed to educate so that you can become more effective in your life and interactions and more optimistic about your abilities and possibilities.

To listen to the audio version read by author David Lieberman, download the Next Big Idea App today: