The Neuroscience of You: How Every Brain Is Different and How to Understand Yours 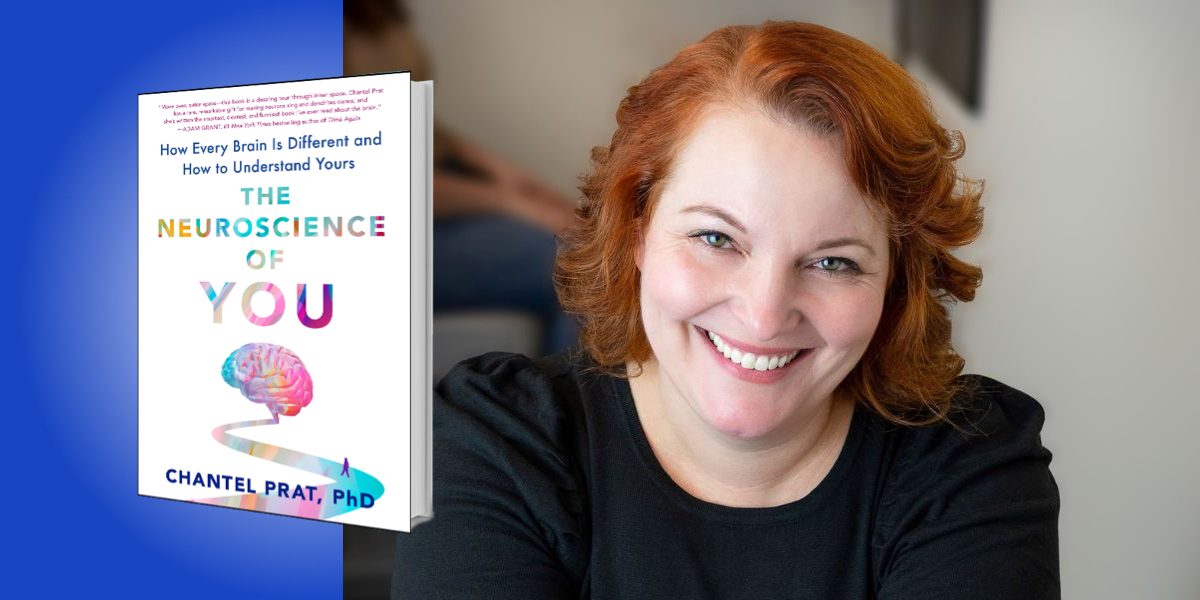 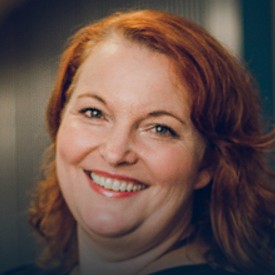 Chantel Prat is a professor at the University of Washington with appointments in the departments of Psychology, Neuroscience, and Linguistics. Her studies have been profiled in media ranging from Scientific American, Psychology Today, and Science Daily to Rolling Stone, Popular Mechanics, and National Public Radio.

Below, Chantel shares 5 key insights from her new book, The Neuroscience of You: How Every Brain Is Different and How to Understand Yours. Listen to the audio version—read by Chantel herself—in the Next Big Idea App. 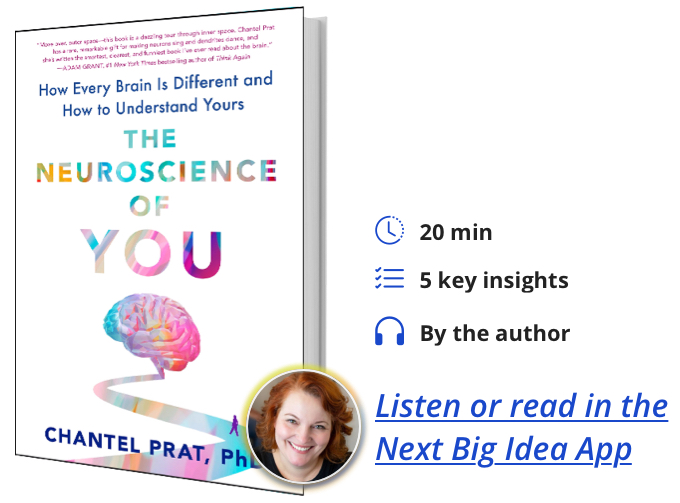 1. Brains of a feather flock together.

Social neuroscience experiments have shown that the more similarly two peoples’ brains work, the more likely they are to be friends. This is probably because our brain’s most instinctive approach to understanding another person is through mirroring. For instance, when we observe someone else’s actions, our brains activate the motor programming regions that would be involved if we were to take that same action.

Some have argued that this is where empathy comes from. But what happens when the mind you’re trying to understand is the product of a brain that doesn’t work like yours? This can create misalignment, because your assumptions about the engine that is driving a person to behave the way they’re behaving are based on the way you work.

Fortunately, there is another way to understand others—one that takes more effort and involves conscious, explicit reasoning about what drives someone else. Much like we can understand other things we can’t directly observe—like quantum physics—we can build mental models of the invisible minds of others by reverse engineering them based on observable behaviors. This skill develops later in life and is called creating a Theory of Mind.

Remarkably, behavioral genetics research has shown that this way of understanding others is entirely learned. Parents and caregivers who are mind minded (using language that shows that a person’s behavior is driven by their unique mental states) are more likely to raise children who learn to reverse engineer the minds of others.

2. Be more curious than judgmental.

Even if you have the tools to understand why someone behaves differently than you would, it doesn’t mean that you will put in the effort to do so. Our brains have a clever way of enhancing our motivation for this kind of work when we’re forming our most evolutionarily important relationships: committed romantic relationships or parent-child bonding. This bond formation releases oxytocin, a neurochemical that emotionally rewards those socially-relevant signals.

” Different brains build different realities and that is surely something to be curious about, without feeling threatened about the righteousness of your own reality.”

Unfortunately, a strong sniff of oxytocin won’t motivate us to understand others that are different, especially if they are not family or love interests. Research suggests that oxytocin actually increases our awareness of in-group and out-group differences, encouraging us to feel positively about people like us and negatively about those we perceive as “other.”

In the field of curiosity research, a recent theory developed by Gruber and Ranganath claims that when faced with uncertainty, our brains first go through an appraisal phase in which they figure out whether seeking new information is safe or dangerous. Curiosity arises because your brain determines that it is probably safe to explore this unknown space, and learn something new. On the other hand, if you feel threatened—physically or psychologically—your brain will shut down and try moving you away from the danger.

So how might we nudge our brains toward feelings of safety when trying to understand the unexplored space of the mind of another? One possibility is developing appreciation for the gap between our subjective realities and the objective, knowable world. Different brains build different realities and that is surely something to be curious about, without feeling threatened about the righteousness of your own reality.

Remember The Dress that took the internet by storm in 2015 because people couldn’t agree whether it was blue and black, or white and gold? Using this trivial pop phenomenon, we can learn something important about different perspectives.

First, The Dress demonstrates what can happen in the gap between subjective realities and the objectively knowable world. Your senses process information in discrete, bite-sized chunks, and then your brain fills in the blanks to make you feel like you have an uninterrupted understanding of the infinite, dynamic universe. To do this, it creates shortcuts based on previous experiences. For example, our experience of different colors is directly related to the wavelength of the light bouncing off of an object.

However, if color perception were that simple, then we would all see a green apple turn red in the sunset, or blue in a shadow. Instead, our brains learn that the properties of light bouncing off of an object are more likely to change than the color of the object itself. To adjust for that, they use context. A survey of the light waves in an environment allows your brain to decide automatically what color something is by comparing it to the things around it.

“If something as elementary as the color of an object can be interpreted differently based on our previous experiences, then imagine how different ways of understanding the world scale up.”

If something as elementary as the color of an object can be interpreted differently based on our previous experiences, then imagine how different ways of understanding the world scale up when it comes to more complex and abstract beliefs.

4. People learn by carrot or stick.

If I asked you what type of learner you are, you would probably say visual, verbal, or experiential. But these labels refer to how we prefer to learn by instructions, while the majority of daily learning relies on trial and error. To understand how your brain uses life experiences to shape your approach, we’re going to need to talk about reinforcement learning.

In a nutshell, your brain associates any space you’re in (mentally or physically) with actions you might take. For sports aficionados, you might think of this as a complicated playbook for living. As you move through life, your brain keeps a record of how different actions work out, and will continue updating the expected value of different choices. Your brain might also teach you to pay attention to certain features of the environment that are critical for understanding which decision is best.

People who learn by carrot easily find the good things in life. When faced with two good options, a carrot learner will be incredibly good at deciding which is likely to be the most rewarding. However, if faced with no good options, they have a really hard time choosing the least bad amongst them. Stick learners learn the most from their disappointments. The decisions of stick learners are more for avoiding things that suck, than for chasing great things. A stick learner is excellent at picking the least bad thing when every option is suboptimal. Our research has shown that stick learners also have an advantage when problem-solving because they are more likely to notice if their strategy isn’t working. They know when their train of thought is on the wrong track.

5. Different does not mean better or worse.

Vertebrate brains have been evolving for hundreds of millions of years—hundreds of thousands of those as Homo sapiens. The ways we define success today are narrow given the broad range of problems our brains solved to ensure our survival.

Take reading, for example. Reading is central to functioning in modern society and is a cornerstone of the educational system. For the estimated 15 percent of children who struggle to read, it becomes a barrier to all information delivered through texts. But most estimates suggest that humans only started using written languages about 5500 years ago—that’s pretty recent in evolutionary terms. According to a theory by Marian Annett, the shift in human brain structure that led to increased verbal abilities was, in part, the shrinking or impairment of our right hemisphere, rather than the strengthening our left. She argues that while people with left-dominant brain asymmetries might be at a lower risk for reading difficulties, they have a correspondingly higher risk of struggling with the spatial and navigational skills crucial for survival.

“You can’t objectively decide which type of brain is better or worse without considering what it is you’re trying to do with it.”

Another example of differences that don’t equate to better or worse is that of the brains of London’s taxi drivers. These minds became famous when neuroscientist Eleanor Maguire discovered that the area of the brain commonly associated with forming new spatial memories (the tail end of the hippocampus) was bigger in these drivers than in controls matched for age and general intelligence. This might make more sense if I explain that to get a taxi license in London you must pass a test that involves memorizing the layout of more than 20,000 streets. People study for years and fewer than 50 percent of test-takers pass.

Were these taxi drivers born with bigger brain regions that allowed them to commit all of that spatial information to memory? A follow-up study provided a resounding no. Neuroscientists scanned the brains of a new group of people who had just started studying for the test to see if they could predict who would pass or fail based on the size and shapes of their brain regions. They couldn’t and, in fact, one of the only things that predicted who would pass was the amount of time they studied. After more than a year of studying, their hippocampi became larger. You can change your brain in some circumstances if you work hard enough.

Later, Maguire and her team compared the memories of taxi drivers to another group with similar day jobs: London’s bus drivers. They found a profile of relative strengths and weaknesses associated with the demands of their specific jobs. Having memorized thousands of maps, taxi drivers were better than bus drivers at estimating distances between familiar places, or recognizing landmarks. However, when it came to taking in new information, like remembering lists of words, the bus drivers outperformed the taxi drivers. The moral here is that when the brains of taxi drivers adapted to storing the knowledge they needed for functioning, there was an observable cost to other memory systems. You can’t objectively decide which type of brain is better or worse without considering what it is you’re trying to do with it.

Figuring out how your brain works is more like finding your own lane than winning a race. At the end of the day, there are different types of normal and differences aren’t necessarily better or worse—they’re just different.

To listen to the audio version read by author Chantel Prat, download the Next Big Idea App today: