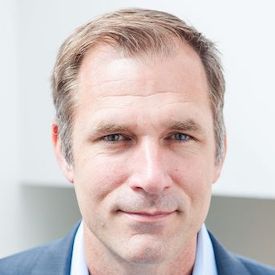 Mike Hayes is the former Commanding Officer of SEAL Team TWO, leading a two thousand-person Special Operations Task Force in Southeastern Afghanistan. In addition to a twenty-year career as a SEAL, Mike was a White House Fellow, served two years as Director of Defense Policy and Strategy at the National Security Council, and has worked directly with both Presidents George W. Bush and Barack Obama. Beyond his military and governmental service, Mike is currently the Chief Digital Transformation Officer at VMware.

Below, Mike shares 5 key insights from his new book, Never Enough: A Navy SEAL Commander on Living a Life of Excellence, Agility, and Meaning (available now on Amazon). Download the Next Big Idea App to enjoy more audio “Book Bites,” plus Ideas of the Day, ad-free podcast episodes, and more.

Next Big Idea Club · Never Enough: A Navy SEAL Commander on Living a Life of Excellence, Agility, and Meaning

1. Above all, meaning matters the most.

In my time as a SEAL commander, in over a thousand decisions about whether to launch an air-to-ground engagement with the enemy, my team never harmed anyone we shouldn’t have. Part of that was good fortune, but much of it was letting the overall mission drive everything we did. In other words, meaning matters most, so everything we did had to be driven by a desire to not harm civilians.

We can never stop pushing to create meaning and impact in our lives and in the world, whether you’re trying to move your business to the next level, or you’re a stay-at-home mom or dad trying to shape your kids into the people you hope they’ll become. And the way to do it is by starting every decision by asking what you’re trying to achieve, and whether that’s really the right goal. Too often in life, we talk about tactics—the what—but thinking about why you’re doing something, the values you want to push forward in the world, and the impact you want to create is going to get you closer to success every time.

As a new SEAL, I was part of an exercise to test some new equipment. Four of us were dropped from a boat just a few miles from shore, and were told to swim to the beach and then back to the boat. The weather was terrible—40-knot winds, eight-foot-high waves, freezing cold water. When I got to the beach, there was no sign of my teammates or the boat. I didn’t know what happened, but in my mind, finishing the practice mission was above everything. I got back in the water and started swimming toward the boat, hoping I’d find my way, but I couldn’t. I was basically lost at sea.

“the real test of who you are comes not when you’re comfortable, but when you’re deep in a stressful situation.”

Fortunately, the boat did finally find me, but was I a hero for swimming through impossible conditions? Of course not; it was stupid. It’s good to push yourself to do hard things, but do them when they’re the right things to do. In business, there’s often a big difference between the hardest choice and the right choice. In other words, take only the most necessary risks.

In 1996, I was held at gunpoint by five armed assailants in Peru, where I had been helping run a training program. My SEAL teammate and I were held captive in a vehicle with these terrorists, absolutely unarmed, being questioned in rapid-fire Spanish. At one point, they let their guard down enough that I could have grabbed a weapon, bailed out of the vehicle, and survived. But in response, they almost surely would have killed my teammate. I didn’t think I would ever leave a teammate behind to save my own life, but that principle hadn’t been tested until that night.

We eventually escaped together, but had I turned on him, my true character would have been revealed. After all, the real test of who you are comes not when you’re comfortable, but when you’re deep in a stressful situation. To succeed in life, you can’t use those hard moments as an excuse to deviate from your moral and ethical standards. When things get difficult, those are the moments when your moral and ethical standards count the most.

4. The more I hurt, the less my teammates hurt.

During President Obama’s administration, I worked as Director of Defense Policy and Strategy at the National Security Council. There once was a situation, later made famous in a movie, where pirates had captured an American ship at sea. I could have let the situation rise up the chain of command and become someone else’s problem, but instead, I got on the phone with the people on the ground. In this way, when the president was faced with a decision about whether to engage, it was made easier by the groundwork that I had already laid.

“If you take on a burden or responsibility, you relieve others who may not have the capability or the capacity at that moment to manage it.”

Victory isn’t a zero-sum game, but pain can be. If you take on a burden or responsibility, you relieve others who may not have the capability or the capacity at that moment to manage it. When you lean into problems instead of running away from them, and look at what you can bring to the table instead of waiting to be asked, that’s how you show value—and that’s how others end up relying on you.

5. One of the best things you can be is intrusive.

One Friday afternoon, I thought about calling a friend of mine. He was in Afghanistan, and I’d been meaning to check in with him. But as I picked up the phone, I remembered there was a new policy requiring a four-digit PIN to use the secure military line, and I didn’t have one. So I decided to call on Monday instead—but I never got the chance. My friend killed himself that weekend. And I still regret missing what might have been an opportunity to save him.

We tend to think of intrusion as a negative trait, but I think there’s another way to see it. Being intrusive means that you’re invested in someone else’s life; you’re connected to them, and able to make an impact. In today’s world, however, we are often too shy or uncomfortable to ask questions of others, or get too close. We think people will judge us if they disagree with us, or that we’re risking friction or conflict by putting ourselves out there. But we have to look for opportunities to invest in others and lift them up. We can all make such amazing contributions to the world and to each other—if we only give ourselves a chance.