I Never Thought of It That Way: How to Have Fearlessly Curious Conversations in Dangerously Divided Times 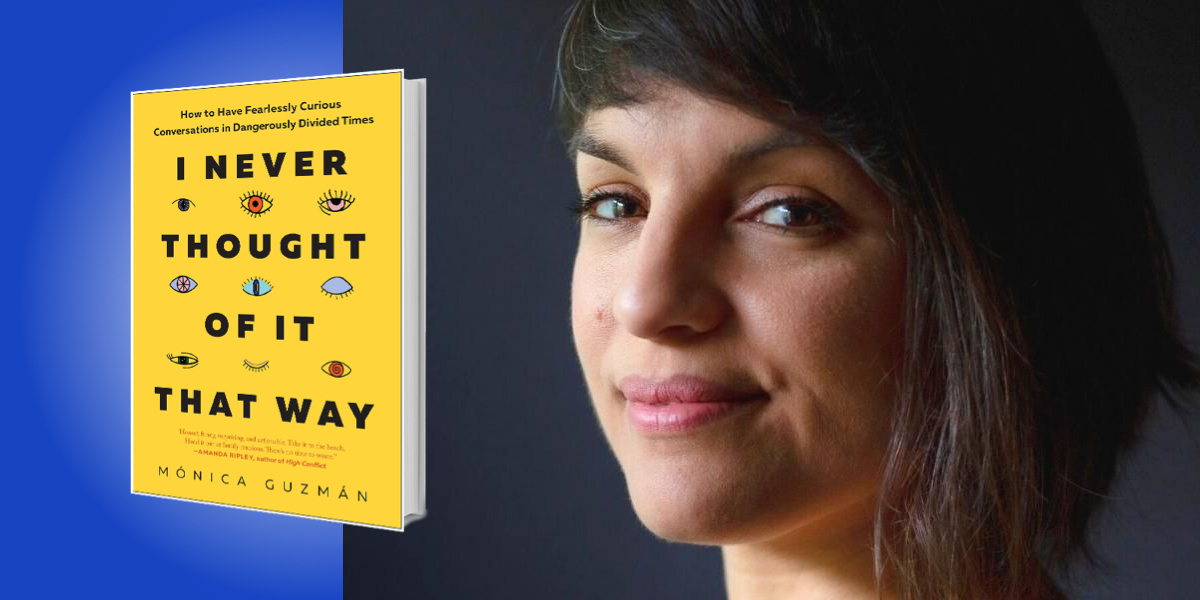 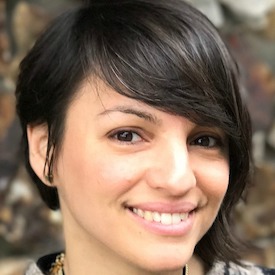 Mónica Guzmán is the Director of Digital Storytelling at Braver Angels, a nonprofit committed to depolarizing America. She is also host of the Crosscut interview series Northwest Newsmakers. Previously she led a network or newsletters as Vice President of WhereBuy.Us, and founded the award-winning newsletter The Evergrey.

Below, Mónica shares 5 key insights from her new book, I Never Thought of It That Way: How to Have Fearlessly Curious Conversations in Dangerously Divided Times. Listen to the audio version—read by Mónica herself—in the Next Big Idea App.

If you can’t get curious across divides in a polarized world, then you can’t see the world at all. The social science research shows us over and over again that when someone is asked to guess the views on the other side of the political divide, they assume that those views are more extreme. We’re looking at a projection instead of reality. I call this S.O.S., the call for help: sorting, othering, and siloing.

Sorting is the natural tendency to want to be around people who are like us—a tendency that grows stronger in times of anxiety and stress. Othering is the tendency to push off from people who are different from us. Finally, siloing is the stories we tell ourselves as a result of sorting and othering. This includes how we can sculpt our digital universes, friends, and feeds so that we do tend to be surrounded by voices who agree with us, or at least share a lot of our experiences and perspectives.

Now, judgment is important. We need to be able to judge our world to know how to negotiate it and make it better. But judgment is reckless when we don’t understand what we are judging. Whoever is underrepresented in our lives will be overrepresented in our imaginations. Instead of people, we’ll see monsters. Instead of possibilities, we’ll see disasters. That’s the challenge of this polarized world, but there is a way we can meet it.

2. We need to get curious about each other, with each other.

Curiosity is our hunger for knowledge—an extraordinary superpower. We are all capable of practicing it, but to use it we have to overcome two big barriers. The first is fear. You can’t wonder about something you think is out to get you. The more threatening we find other people (and the research is showing that we find people who disagree with us to be very threatening) the less likely that we can approach them with curiosity. The second barrier to curiosity is certainty, because if you think you know, you’ll never think to ask.

“When we are aware of a gap in our knowledge, that sparks our hunger to learn.”

But we are wired to understand each other, and to learn. There are four steps to curiosity that we can follow to allow our minds to open up, even when they may not want to:

3. We don’t see with our eyes, but with our whole lives.

To stay curious, we need to learn how to resist the unreasonable ways that we reason. For example, if you catch yourself, in a disagreement, saying the reasons why you believe what you believe, and then the other person says the reasons why they believe the opposite, and then you find yourself repeating those reasons, except with each iteration you’re more angry, then you begin to see how unproductive it is to insist our reasons at each other. Instead, we must let our reasons enrich and inform each other.

Or, oftentimes we begin to see scripts. If someone says A, we understand them to really believe Z. For example, someone who laments looting in a city during a protest must not support the cause behind those protests. We don’t know that to be true, but very often we stomp out the complexity and believe that we already know everything we need to about the motives and perspective of people who disagree with us.

“Often we stomp out the complexity and believe that we already know everything we need to about the motives and perspective of people who disagree with us.”

To stay curious, we have to resist the twin temptation of wanting to win, or change another person. We get excited to share the reason that convinced us on an issue. We hold it in our hand, and it’s glittering and beautiful, and we believe that all we need to do is hand that reason to someone else. If that person is reasonable, well, this reason will have the same impact on their thinking that it did on ours.

But it won’t, because we don’t just see with our eyes. We see with our whole lives. The only way that something we tell someone else is going to change their minds in an instant is if their mind and heart are fertile ground for that idea to take root. The paths we walk to our views are rich and long, and it is not very likely that one meme or mic drop point is going to change someone else’s mind.

Why is a naturally curious question. But in times of deep suspicion and fear, asking someone why they believe what they believe feels like they’re being put on the stand. It gets them to want to justify not only what they believe, but who they are. Asking why is not the best strategy. They’ll be tempted to give you the talking points, the echoes, the things they feel they can take shelter under.

So instead, ask how. How did you come to believe that? This way, you invite them to share their story rather than put them on trial. You ask them to take you on a tour, and as you walk alongside them, you’ll find that even if you completely disagree with their conclusions and find their perspective to be beyond the pale, you might find something in the path they took that you can relate to.

Every time you find a point of connection in the journey they took, it’s like building a base camp up a mountain. You see their struggle. You acclimate, and so you can climb higher in your understanding. For example, if you ask someone who disagrees with you about vaccines, you can ask them, “Where are you on vaccines? Tell me how you got there. What matters to you on this?” If you keep asking those questions and getting curious, you’ll be pretty surprised what you can discover.

5. The most important thing to do with a bridge is to keep it.

I’ve heard from lots of people who say, “Look, I’ve tried. I sat down with my uncle, my brother, my friend, and tried to have a curious conversation across our disagreement, but they just kept talking at me. They never asked me any questions.” Or, “Man, they were so angry the whole time. It felt like they weren’t taking any steps toward me. I burned the bridge. I decided I can’t talk to them anymore. There can’t be a relationship here.”

This is a natural reaction when our conversations aren’t as productive as we expect. But if you can have a conversation with the same person on the same topic later, you never really burned the bridge. If there’s a deep divide, it’s going to take a long time before someone feels heard, and people need to feel heard in order to hear. It may take a while, but in some ways, the most curious thing you can do is not burn the bridge.

I also hear people say, “I’m not ready to talk to somebody who disagrees with me. It’s too painful for who I am.” We all have our own formulas and calculations that are extremely personal. But even then, everyone can take a small step. The next time you see a headline that seems extremely provocative to you, but you know that it is reflecting something a lot of people believe, and it comes from a reputable enough source, ask yourself two questions as you read the article:

Even if you are not crossing a bridge toward someone, you are doing it in your mind every time you allow yourself to not be locked into certainty about someone else’s perspective. Instead, you’re open to the possibility that there is something you’re missing. That question of “What am I missing?” is the most important one we’re not asking in these dangerously divided times.

To listen to the audio version read by author Mónica Guzmán, download the Next Big Idea App today: