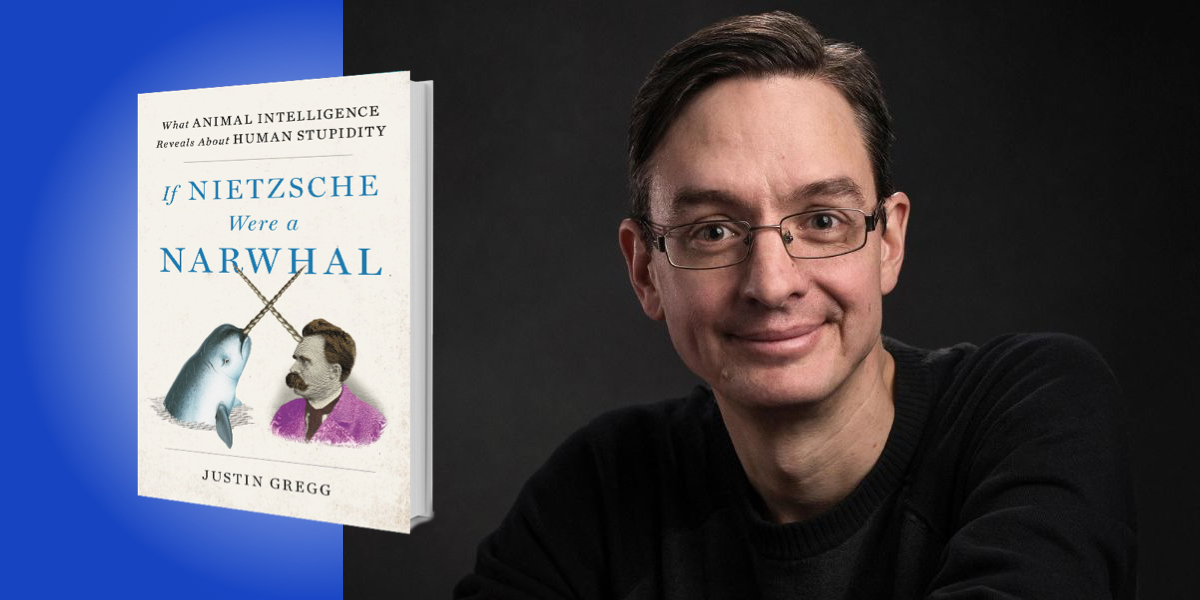 Justin Gregg is an animal cognition researcher. He is an Adjunct Professor at St. Francis Xavier University and a Senior Research Associate with the Dolphin Communication Project. His writing can be found in The Wall Street Journal, Scientific American, BBC Focus, and Slate, among others.

Below, Justin shares 5 key insights from his new book, If Nietzsche Were a Narwhal: What Animal Intelligence Reveals About Human Stupidity. Listen to the audio version—read by Justin himself—in the Next Big Idea App. 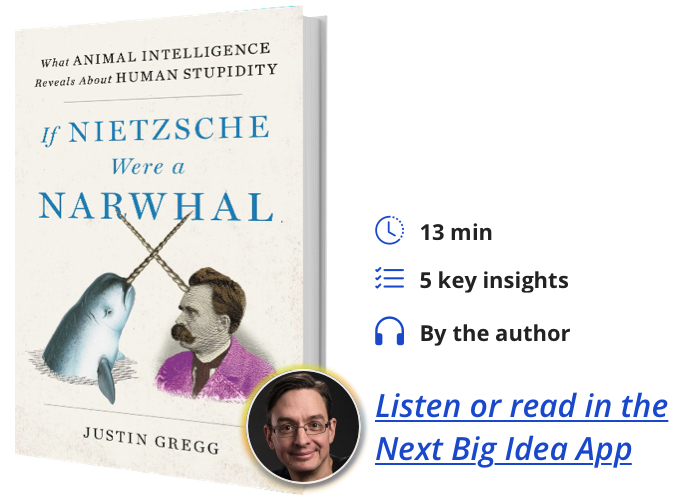 1. Knowing you are going to die isn’t that much fun.

Humans are likely the only species on the planet that truly understands our own mortality. Other animals do understand something about death—like a cat or a dog can learn the difference between a living creature and a formerly living creature that will never function again. But the human mind is unique in that we understand that there is a future in which our body and mind no longer exist. We have the ability to imagine this scenario, and we understand that this scenario is inevitable. We know that we will surely die someday.

On one hand, awareness of mortality is useful information. It helps us plan our behavior to both avoid dying and provide for those that are still around after we die—like life insurance, for example. But knowing that we are mortal generates a lot of misery. The only way we can function without dwelling on our own mortality is through the ability to ignore this fact most of the time, to live in a kind of denial. Humans’ constant battle against these thoughts is a major contributor to anxiety, depression, and suicide.

“Nietzsche is the poster child for how thinking too hard about existential questions leads to a life of misery.”

This death wisdom is unique to our species, and it isn’t really all that much fun. There’s a good argument to be made that humans are not better off with death wisdom—it’s an argument that made Nietzsche jealous of nonhuman animals. Nietzsche is the poster child for how thinking too hard about existential questions leads to a life of misery. A kind of misery that nonhuman animals don’t have to deal with.

Animals live by a set of unspoken guidelines for how to behave—also known as norms. Humans have them too. There’s a human norm, for example, that you can’t go up to a stranger in public and run your fingers through their hair. That would be weird. Yet, it’s a rule that parents don’t explicitly teach their children. It just automatically crops up in most cultures. This is similar to how norms work for animals. Chickens, for example, develop a pecking order that dictates who gets to eat first.

However, humans have the intellectual capacity to think deeply about norms and codify them in such a way that they become explicit. They are rules that we consider and evaluate. That’s how we end up with laws or religious and philosophical doctrines explaining what is allowed from an ethical perspective. We call these things morals, and they are unique to humans.

The problem with morals is that we can use complicated reasoning to arrive at a moral position that is reprehensible. A government or a church can justify genocide on moral grounds. It has happened countless times in history. Animals don’t have the ability to transform their norms into explicit moral codes, which is exactly why animals do not commit atrocities like the Holocaust. This is why animal normativity is often better and less destructive than human morality.

3. You don’t need to know why things happen to make good decisions.

Humans are unique in our ability to ferret out cause and effect. We are curious as to why things happen—for example, why we hear thunder after seeing a lightning strike. That curiosity led humans to understand that lightning rapidly heats the air and that thunder is caused by the sudden compression of hot air.

“A dog doesn’t need causal inference to make a smart decision about hiding.”

Animals are far less interested in (and usually incapable of) these kinds of causal inferences—but that’s perfectly fine. Most of the time, all an animal needs to know is that one thing often follows or precedes another. Learned associations give animals knowledge of correlation, just not causation. A dog can learn through association that thunder follows lightning, so if it sees lightning it should take shelter under the couch. A dog doesn’t need causal inference to make a smart decision about hiding.

Animals have been around for billions of years using only learned associations to make decisions on how to behave. Don’t get me wrong—causal inference is great stuff. It’s how science was able to make discoveries, like vaccines or nuclear fission. But some of those things are quite dangerous. Nuclear fission produced the atom bomb, which is actually a potential issue for the survival of our species. Maybe causal inference is more of a curse than a blessing.

We used to think that only humans were conscious, that we were the only species with subjective experience and a complex self-awareness, with an ability to think about our own thinking. But the past 50 years of research into animal minds have revealed that many species behave in ways that can only be explained through them having some form of self-awareness, subjective experience, or metacognition (the ability to think about their thinking).

Many animals will self-medicate with alcohol when they feel sad, including both elephants and fruit flies. There is no reason for an animal to use mind-altering substances if there isn’t a mind there to alter in the first place. Many animals appear to be aware of their feelings in this way—and not just chimpanzees or animals closely related to us. There is evidence that insects too have the brain structures necessary for generating consciousness. From a biological perspective, it makes sense that consciousness would be universal for animals.

One of the best explanations as to why animals behave as they do is because they are aware of the negative and positive feelings that they want to reduce or enhance. The reality is that it’s impossible to know if any creature is conscious, other than ourselves. You can’t even really be sure that your spouse or children are conscious. You believe that they are because they say that they are and act like they are. Well, now it seems as if animals act as if they’re conscious, so maybe it’s time to accept that consciousness is widespread in the animal kingdom.

It seems like most of the terrible things happening in the world are a direct result of our “exceptional” human intelligence. Our unique human moral sense often makes us do terrible, immoral things. Our technical prowess and ability to understand the physical properties of the universe through causal inference has led to the invention of the combustion engine, thus causing climate change. All of the new stories of recording-breaking temperatures and natural disasters are a path that we ourselves created with our own inventions. There are no other examples of a single species altering the Earth’s environment in such a drastic way that it might become uninhabitable. This is a unique outcome of human cognition—of all of those things that allow for science, technology, engineering, etc.

“From a biological perspective, it makes sense that consciousness would be universal for animals.”

In that sense, if human intelligence is a biological trait that has created the conditions for our own extinction, then it’s safe to say that it’s not a good evolutionary solution. Contrast this, for example, with how crocodiles think. They don’t have the cognitive skills needed to contemplate mortality, or the causal, inferential skills for farming, and yet crocodilians have been around in nearly the same form since the dinosaur age. Their cognition hasn’t changed much because the way crocodiles think is a fantastic solution to biological success. Humans have been roaming Earth in our current form for only 250,000 years, with our modern cognitive abilities only in place for roughly the past 50,000 years. Human intelligence is a very new concept, and given how close we are to extinction, it looks as if human intelligence is not going to stand the test of time.

We need to reconsider the value of human intelligence from the perspective of biology and evolution. Despite all the cool things it has brought us, all human intelligence is starting to look like a serious liability. The only way out of our current predicament with climate change is to devise an intelligent solution to reducing carbon in the atmosphere. So, it’s a race to use our intelligence to solve all the problems created by our intelligence. Maybe we will pull it off, or maybe human intelligence will go the way of the dinosaurs while the crocodiles look on smugly from the riverbanks.

To listen to the audio version read by author Justin Gregg, download the Next Big Idea App today: