The No Club: Putting a Stop to Women’s Dead-End Work 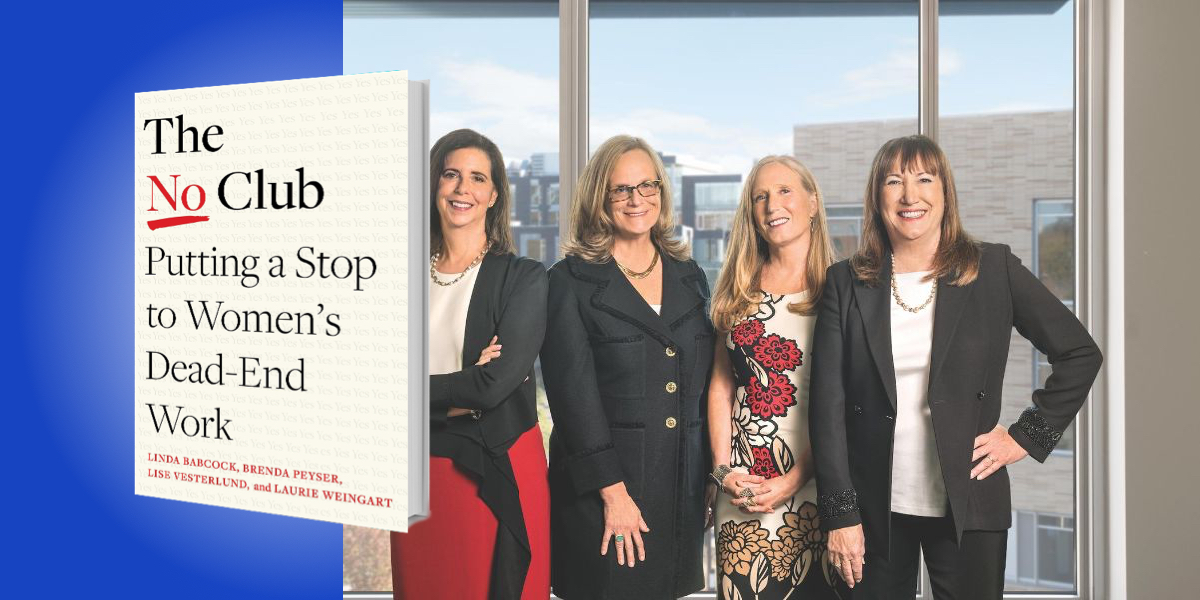 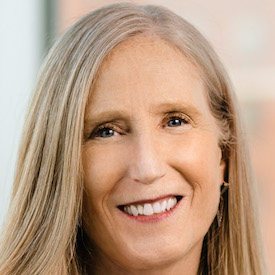 Friends Linda Babcock, Lise Vesterlund, Laurie Weingart, and Brenda Peyser are all professors and high-level administrators at universities. This successful group of women realized that their shared anxieties over time management were symptoms of systemic faults, rather than from personal inadequacies. They formed the No Club to get their work life under control, and they share the secrets of this cohort’s 12-year journey in their new book.

Below, Linda shares 5 key insights from The No Club: Putting a Stop to Women’s Dead-End Work. Listen to the audio version—read by Linda herself—in the Next Big Idea App.

1. Not all tasks are created equal.

At our No Club meetings, we talked about all of our work tasks. Some tasks took a lot of time, but didn’t seem very important to our jobs. We served on the website committee, answered questions from new employees, resolved disputes between coworkers, and edited recruiting materials. We started calling these “non-promotable tasks”—NPTs for short. NPTs are important to our organizations, but won’t help our careers. To put it bluntly, we weren’t going to get praise, a raise, or a promotion for picking out new furniture for the lounge. Our club’s first task was figuring out what made these tasks non-promotable, and we identified three distinguishing features.

First, NPTs are not directly tied to the mission and business objectives of the organization. A for-profit company focuses on revenue generation, so any task that supports that goal will be promotable. Lisa is a professor, so writing a research grant proposal would be promotable, but writing a committee’s weekly report would not. Her university and her career would be better served by writing the research proposal.

Second, NPTs are invisible. Doing work behind the scenes won’t help if no one knows you did it, like when Brenda spent hours mentoring employees who worked in other departments. That helped the organization, but didn’t factor into her performance review.

Third, many people can do NPTs. You were hired for the specialized set of skills you bring to your job. Laurie could coordinate the logistics for a conference, but it didn’t require her training or expertise, and so could be better handled by someone else.

We were drowning in non-promotable work and started to wonder if other women felt the same way. Do women typically do more NPTs than men? All the research showed it wasn’t just us. Across occupations and industries, we found evidence that women shoulder the burden of NPTs. Engineers, TSA agents, grocery store clerks, consultants, teachers, investment bankers, architects, and academics—in all of these occupations, women did more NPTs than men. The magnitude of the inequity was striking. We looked at detailed information about how people spent their time at a professional services firm and found that women spent 200 more hours per year than men on NPTs. That’s a whole month more of unrewarded work.

“We looked at detailed information about how people spent their time at a professional services firm and found that women spent 200 more hours per year than men on NPTs. That’s a whole month more of unrewarded work.”

Where do all these extra hours come from? Well, when faced with a big load of NPTs, you have two options. First, you can reduce the time you spend on promotable work. That’s what I did, and I paid a price: I was less productive, I came to question my competence, and I became unhappy with a job I once loved.

The second option is to spend additional hours working, and that’s what Lisa did. It cut into her time with family, and meant she worked many late nights. This created a lot of stress and significant health problems. Either way, you suffer from too many NPTs because both come with significant costs: loss of confidence, erosion of time with family, adverse impact on health, and/or stagnation of careers.

3. It’s all about expectations.

Do women end up doing so many more NPTs than men because they enjoy this work? Or are they better at it? The answers are no and no. The real reason is more complicated.

Imagine you’re in a meeting, and your boss asks for a volunteer to take notes. Everyone looks down, out the window, or at their phone. No one wants the job. Who steps up to the plate and says, reluctantly, that they’ll do it? We created a research study mimicking this situation and found that women volunteer 50 percent more than men. Time and again, women bit the bullet to do the work that no one wanted. But here’s what’s most interesting: it only happened when we put women and men together in a group. When men were in groups by themselves, men started to volunteer more. This means that men know how to volunteer for an undesirable task—they just don’t do it when women are around. When both men and women are present, everyone expects (and waits) for women to volunteer. This is why women say yes so often—because they know everyone expects them to. If women don’t say yes, they risk backlash or their own guilt for not living up to those expectations.

These expectations create another dynamic. Because we know that women will say yes, we ask them more than we ask men. In fact, our studies show that women get asked almost 50 percent more than men do. Women have a double whammy to deal with because, 1) they fear that upending expectations can result in negative consequences (because it often does), so they get caught in a vicious cycle where they continue to say yes, which, 2) prompts everyone to be more likely to ask them again. It’s easy to see how this can result in loads of non-promotable work for women.

“Men know how to volunteer for an undesirable task—they just don’t do it when women are around.”

4. Burdening women is bad for them—and bad for business.

Women aren’t the only ones who suffer when they’re saddled with NPTs—their organizations do, too. But by better allocating NPTs, organizations can correct inequity and even improve their operations and profitability.

First, they can better utilize their workforce. We know a pulmonologist who is the only doctor in the hospital who can perform lung transplants. This experienced physician is also tasked with administrative responsibilities—all of which take time. Imagine how many more lung transplants the hospital could do if the doctor didn’t have to handle the non-promotable administrative work? This doctor’s specialized skills are sacrificed for work that almost anyone in the hospital could do, so changing the allocation of NPTs can improve productivity.

Second, sharing NPTs across employees results in a positive organizational culture. Theresa, an aeronautical engineer, managed a mentorship program for women in her division. The time she spent took away from her engineering and management role. Consequently, she was passed over for a big promotion. She quickly found a job elsewhere, and the other women were furious. What was the point of handling mentoring programs or DEI initiatives if they won’t get you anywhere? They stopped doing all these activities, which eroded morale. Keeping employee success aligned with that of the organization will create a workforce that’s engaged and satisfied with their work. As a company, this will mean better productivity, greater job satisfaction, and reduced turnover.

Third, an engaged workplace makes it easier to attract and retain employees. Being known as “a good place for women to work” makes it easier to achieve DEI objectives and attract top talent. Theresa’s company lost sight of the fact that happy employees don’t need greener pastures.

“Being known as ‘a good place for women to work’ makes it easier to achieve DEI objectives and attract top talent.”

We got really good at saying no, and were proud of ourselves until we had a horrifying revelation: every time we said no, the task went to another woman. We wanted all women to have equal opportunities to succeed, but if saying no isn’t the answer, then what is? We needed a bigger solution that included everyone, from individual women, to managers, to top leadership—because each of us have a role to play in addressing women’s burden of NPTs.

You, personally, can nudge your organization to change. When someone asks for a volunteer, suggest that the assignment be put on rotation. When Brenda was asked to take notes in a meeting, she said, “Sure, I’ll do it today, but who will do it next week?” When Lisa’s college needed a volunteer to write up a promotion committee report, she suggested that they draw names out of a hat. The suggestion was so obviously fair that the solution stuck. Speak up on behalf of yourself or someone else. The more voices joining in the better, because soon everyone will be aware of NPTs and that, in itself, can start changing the landscape.

As a manager, you have more opportunity to balance the distribution of NPTs across all employees. You will need an accurate accounting of what each employee does (both promotable and non-promotable tasks) and how much time they spend on them. Track their tasks over time, mentor them so they know what is promotable and what isn’t, and redistribute work so that everyone has a fair share. When Laura managed committee assignments for her school, she rotated people on and off assignments to balance the loads for both women and men.

Organizational leaders can have the greatest impact because they can redesign jobs so that tasks become promotable. Take a close look at NPTs, identify the ones that affect your organization’s success, and include them in performance evaluations of the people that do them. Consider DEI initiatives, team-building events, and employee development workshops. Right now, these are probably non-promotable tasks, but they matter enough to be promotable. We encourage leadership to take a long view of these tasks and see how they matter to productivity, morale, and employee retention.

Fortunately, these are inexpensive solutions that are easy to implement.

To listen to the audio version read by co-author Linda Babcock, download the Next Big Idea App today: